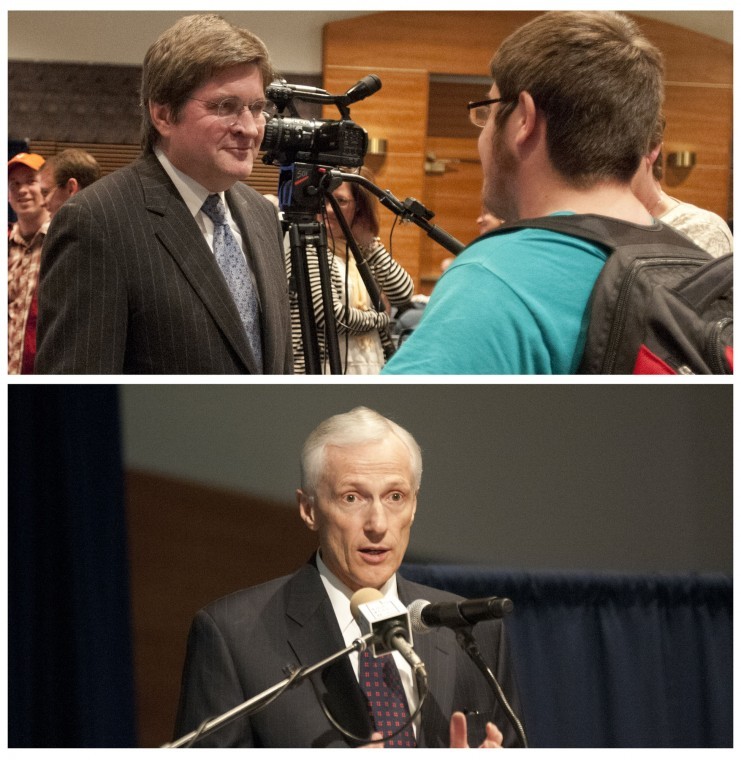 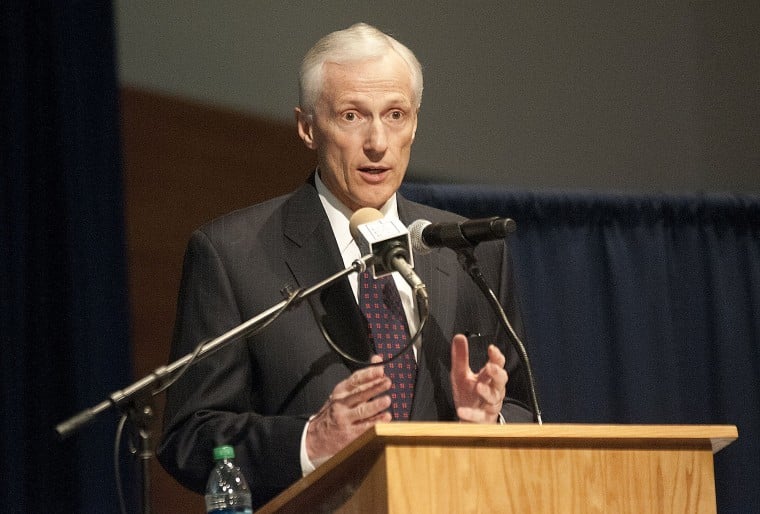 Lt. Gov. Greg Bell speaks about the ecomony in Utah during a debate with challenger Vince Rampton at USU on Wednesday. (Jennifer Meyers/Herald Journal) 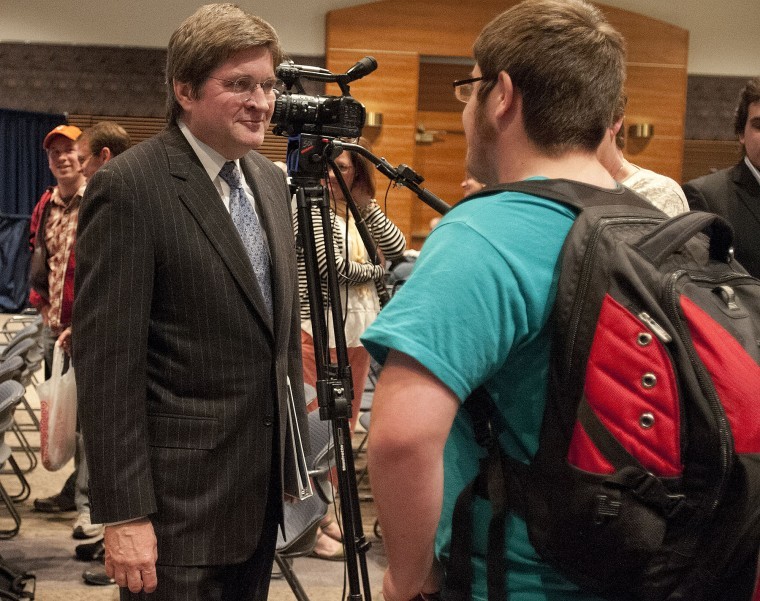 Lt. Gov. Greg Bell speaks about the ecomony in Utah during a debate with challenger Vince Rampton at USU on Wednesday. (Jennifer Meyers/Herald Journal)

The debate capped a campaign season during which Bell has tried to convince voters to give the Gov. Gary Herbert administration its first full term, while Rampton — the son of the late Democratic Utah Gov. Cal Rampton — has argued for a political change for a state that has long had a “supermajority” of Republicans.

“Utah has come to an interesting point in history,” said Rampton, who is on the ticket with retired two-star Gen. Peter Cooke, in his closing statement Wednesday. “Utah has many wonderful qualities. It has, however, been a one-party state, singing the same tune for far too long. It is time for the business of business as usual to end. It is time for a new leader to come into the statehouse and offer a different point of view.”

During the debate, Bell attempted to bolster his argument for a first full-term by citing the administration’s work to get more funding in public education and the fact that Utah’s unemployment rate now stands at 5.4 percent — well below the national average.

“Utah has a bright future, but it has to be a future used with different tools; we have to think smarter,” Bell said. “We have put stakes in the ground in the federal universe. We’ve been a sovereign state. Gary Herbert and I have run a bi-partisan government, and we’ll continue to reach out.”

Utah has no secretary of state, so many of the functions that would commonly be served by that office are fulfilled by Utah's lieutenant governor. They include maintaining general oversight authority over all elections — federal, state or local — that take place in Utah.

Rampton said his priorities as lieutenant governor would be campaign finance reform, better voter outreach and placing restrictions on lobbyists in the statehouse.

Rampton said corporate contributions to campaigns “need to be curtailed” to $2,500 per candidate and $5,000 per corporation per election.

“It’s the No. 1 thing that can be done to increase voter turnout,” he said.

Rampton continued: “A (feeling) of helplessness among the voters is becoming endemic in the system. The voters of Utah have come to believe that political process is functioning by large, well-funded institutions influencing the outcome of the election by massive ad campaigns. How many of you are tired of Jim Matheson and Mia Love?”

Bell acknowledged Utah having one of the lowest voter turnouts in the country — ranked by George Mason University as having the sixth lowest voter turnout in the nation — but countered the Democratic challenger’s argument by saying the state has organized an enormous amount of voter registration drives.

USU is one location for early voting in Cache County.

Bell said that since Herbert entered office in 2010 — when Jon Huntsman Jr. stepped down to serve in the Obama administration — the governor has offered him an “unprecedented partnership” as a lieutenant governor. Most recently, it was announced Bell would co-chair an exploratory committee to consider a bid for the 2022 or 2026 Olympic and Paralympic Winter Games.

The biggest higher education issue that came up during the debate was the goal announced by Herbert and higher education officials to have 66 percent of the state’s adult population obtain some form of post-secondary education by 2020.

Bell said it is an attainable goal.

He reasoned that it is important because “employers (today) are not able to supply the manpower” the state economy needs; while not everyone “needs a college education, everyone should have a post-secondary (degree),” because “a high school diploma is not enough.”

Rampton said it is a lofty goal that is not attainable, arguing that students are not coming out of high school prepared for college.

“The problem has been lack of funding, the withdrawal of funding in the K-12 system,” Rampton said. “This needs to turn around. It needs to be where it was in 1994 and 1996. ... Then students can come into these institutions, and then fill the jobs in the Utah economy.”

Both men had differing views on how to handle the state economy.

Bell said the Herbert administration lowered the unemployment rate faster than most states in the course of two years.

“We can create an environment that is friendly to business. We have to have good jobs, and to do that government needs to have sensible regulations,” Bell said.

Rampton said “the job situation for people in this room is not as rosy” as Bell suggests.

“(Bell) would like to believe Utah is a good source of cheap labor; that concerns me,” Rampton said. “We need to ‘build from the inside out’ — with USTAR and regional meetings to hammer out the economic problems getting in the way of local businesses.”