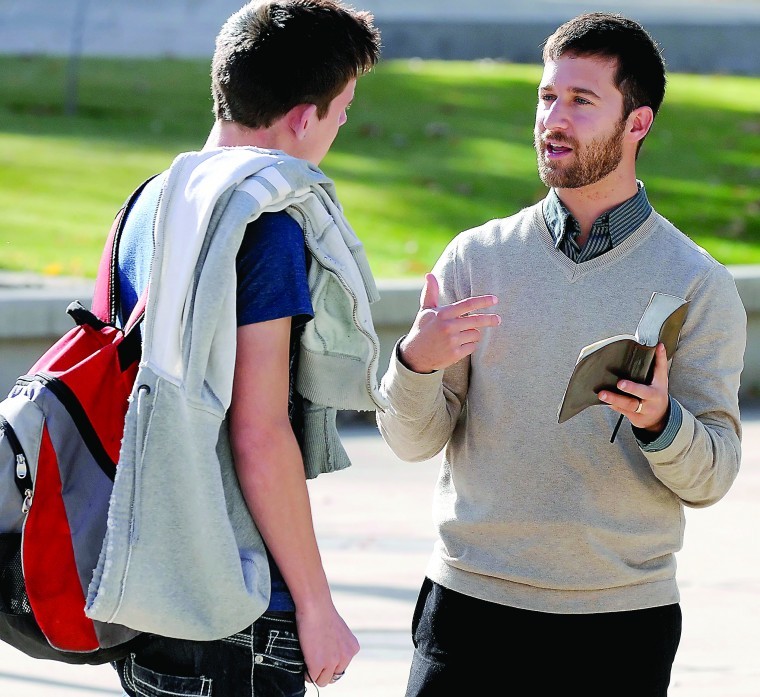 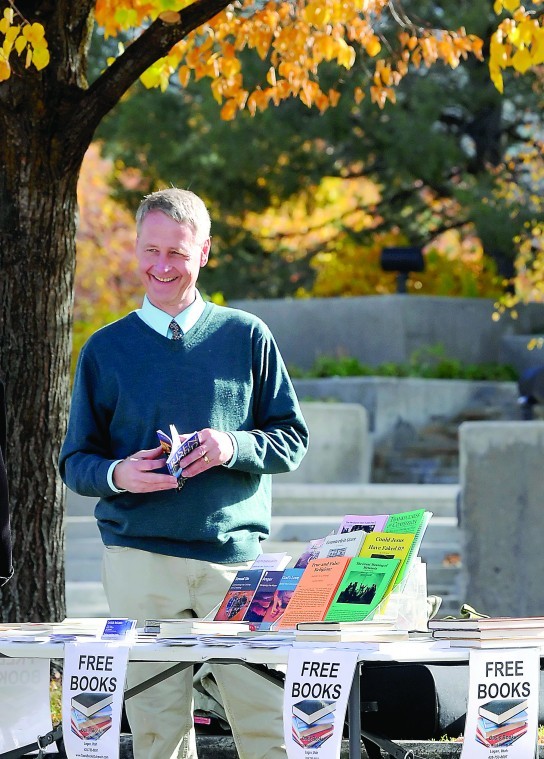 On a typical Tuesday, Wednesday or Thursday, Eli Brayley and Brad Scheelke can be found on the Utah State University campus patio outside the student center.

Brayley, slightly younger than Scheelke and sporting a beard, stands next to a white board bearing a discussion question for the day, like “Can you work your way into heaven?” Scheelke mans a table laden with Christian literature. Both men are evangelists from Community Christian Ministries whose mission is to share what they consider the good news found in the New Testament.

Although Brayley and Scheelke also go door to door, they distinguish themselves from proselytizers, since they aren’t trying to get anyone to join any specific church. Scheelke said they seek to persuade non-Christians to become Christians, and they also seek out people who already are Christian to remind them of what they have.

Their message is of God’s love and of the grace of the Atonement. “True grace is not freedom to break the rules, it’s freedom from the rules,” Scheelke said. The men explained that it isn’t possible for anyone to live up to all the rules in the Bible and in our consciences, but through the Atonement, all sins can be forgiven. In this way, men are free from trying to be good people based on rules and can do good things based on their love for God and mankind.

Brayley said they often get comments that their message seems “too good to be true.”

“The whole point of the New Testament is the good news,” he said. “It should seem that way.”

Brayley said everything they teach is straight from the New Testament, which comes as a surprise to some. He challenges people to read the New Testament with an open mind, and without thinking that, “I’ve got religion all figured out.”

Scheelke said many people think of God like a vending machine, and think if they put in enough good deeds they’ll receive heaven. Christians, he said, should view God as a loving generous being, who’s willing to give us heaven for free.

Over the past six years, the men have met their fair share of people who disagree with and don’t like their message. Typical conversations at the white board often look more like shouting matches.

Because he believes so strongly in their message, Scheelke said, he doesn’t see any interaction as negative, and can enjoy sharing the message even if he’s being yelled at.

In general, Brayley said, the only students who dislike them are people who’ve never spoken to them. Brayley said he and Scheelke are on campus to share their message, but also to be available to answer questions and offer advice. Brayley, because he’s closer to the age of the students, can interact as a peer, while Scheelke has more life experience and specializes in giving relationship advice.

In addition to their work on campus, the men work at the Oasis book store on Center Street in Logan. Brayley said that in addition to selling Christian literature, the bookstore is a hub for Christians to gather and discuss their beliefs. It is also the meeting place of All Saints Church, to which Brayley and Scheelke both belong.

To learn more about their point of view, you can visit the bookstore’s blog at www.oasisbooks.blogspot.com.

Or you can catch up with Brayley and Scheelke on campus. Just look for a knot of students and listen for good news.