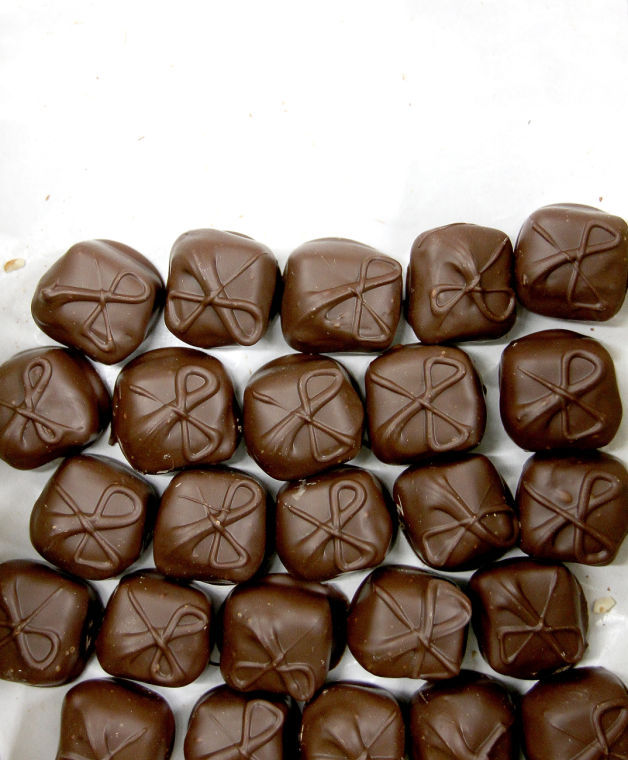 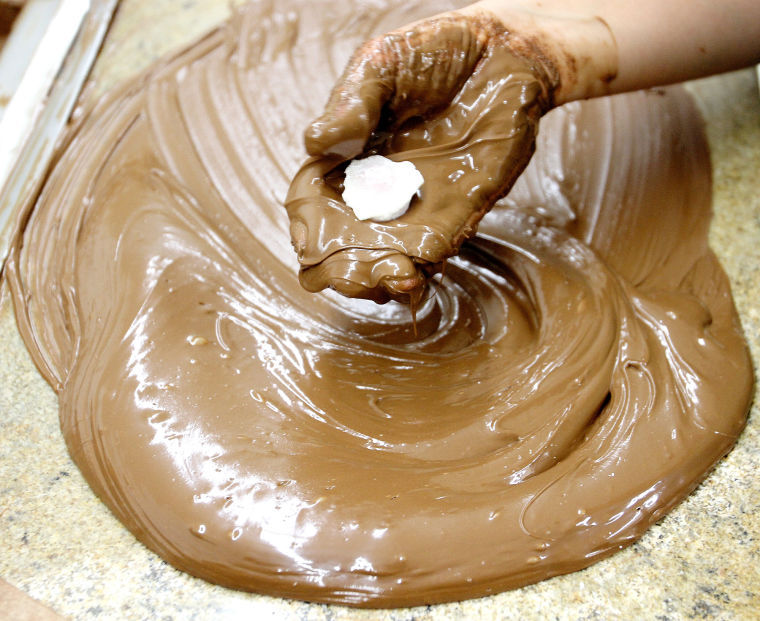 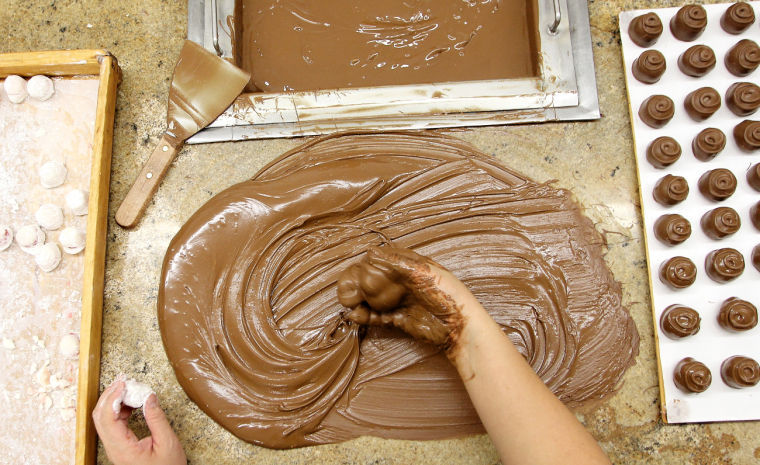 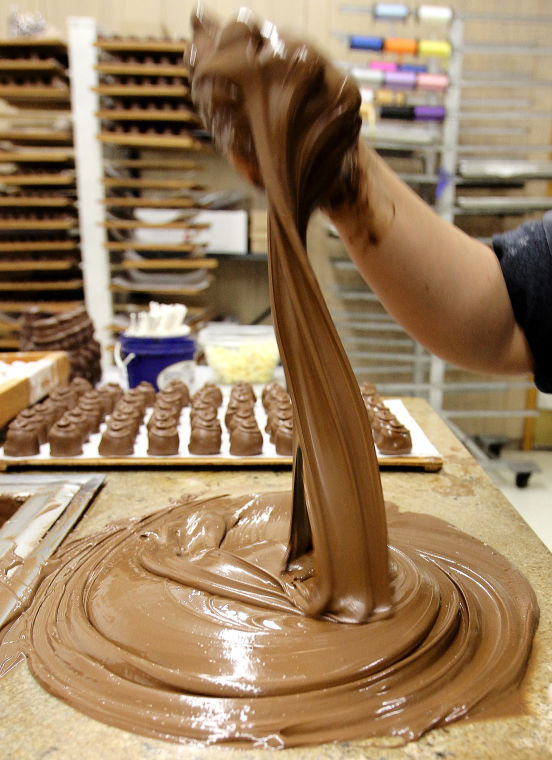 A stream of chocolate flows from a Bluebird Candy Co. employee's hands as the chocolate is aerated while preparing to hand dip candies last week. (John Zsiray/Herald Journal) 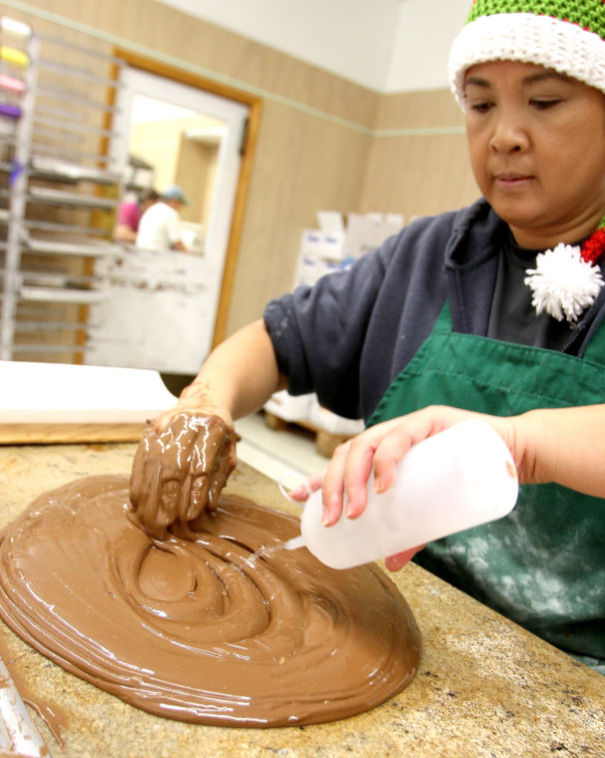 A stream of chocolate flows from a Bluebird Candy Co. employee's hands as the chocolate is aerated while preparing to hand dip candies last week. (John Zsiray/Herald Journal)

A Cache Valley institution is about to turn 100 years old very soon.

The Bluebird Candy Co., founded in 1914 by O. Guy Cardon, Mark N. Neuberger and Julius Bergsjo, has produced hand-dipped chocolates that have satisfied customers for nearly a century, and they’re not showing any signs of slowing down as they head into their next century.

The business started out as a candy, ice cream and soda fountain shop located in Logan at the northwest corner of the Hotel Eccles and Thatcher Bank Building that replaced the Thatcher Opera House after it burned to the ground in 1912. The Bluebird Candy Co. enjoyed rapid success, so much so that in 1921, Cardon and Neuberger opened up a new location at 19 N. Main St., the current site of The Bluebird restaurant. The candy company is now located around the block at 75 W. Center St.

Cardon and Neuberger, and eventually Guy N. Cardon, owned and operated both the candy company and the restaurant until 1989, when Dick Motta and Elmer Larsen purchased the Bluebird Candy Co. Ansheng Xu purchased The Bluebird restaurant in 1994.

The candies at the Bluebird Candy Co. are still handmade, much the same way as they were in 1914, and the process is still a source of pride for the owners and staff of the company.

“We love carrying on the quality tradition of made-from-scratch candy without preservatives,” says Teresa Varner, a current employee at the Bluebird Candy Co.

Alice Cardon Crockett, now a resident of Idaho Falls, Idaho, is the granddaughter of O. Guy Cardon, and she recently shared memories of growing up in “the sweet glow of the Bluebird Candy Company and the Restaurant back in the ’50s and ’60s”:

When I was in grade school, one of the best field trips my class would take was to my father’s ice cream and candy factory. Our bus driver George would park the school bus in the parking lot next to the alley, and we would walk two by two through the brick building lined alley to the big wooden garage doors announcing The Bluebird Ice Cream & Candy Company. My father would be waiting to greet us. We kept our coats on as we trailed through the sweet-smelling labyrinth of high shelves heavy with paper-wrapped slabs of Guittard chocolate, tins of nutmeats from South America and Brazil, great sacks of sugar, and bottles of flavorings. Large and small boxes of chocolates towered above us, stacked and ready for the Christmas season. Then we’d file into Bill’s large candy kitchen. He would be stirring sweet concoctions in huge copper kettles. The kettles rested on kettle lifters, and the candy cooked and bubbled over a gas-fed candy furnace until Bill, the keeper of secret recipes, pronounced it done.

Just as we were starting to heat up in Bill’s kitchen, my father would lead us to the cool of the dipping room. The dipping table had shallow pans of melted chocolate, marble mixing slabs, and the dipping ladies who “seeded” the chocolate to just the right temperature. They deftly swirled the center balls in the chocolate, placing them singly on waxed paper imprinted with “Bluebird,” then created, with a thread of chocolate, a signature indicating the kind of chocolate it was. After the chocolate shell cooled, the ladies gave us each a chocolate right off the dipping board. They were as glossy and rich-colored as if they’d been popped into our mouths straight from the dipping ladies’ fingers.

As we trailed through the sweet cool to the outside cool and our bus, my father gave each of us a small box with three chocolates in it — a gift of “Bluebirds” for us to take home to our families. I don’t think any of those chocolates ever made it home.

On March 31, when I was in sixth-grade, my father arrived home for dinner. He was carrying a cardboard box. Setting it down, he retrieved some restaurant leftovers and a chocolate box.

“This is a special box of ‘bluebirds,’ Al,” he chuckled. “They’re for you to take to school tomorrow.”

My mother looked suspicious. He then lifted a small plate of chocolates out of the box. “For us, after dinner,” he chuckled.

The next morning I could hardly wait to get to school. Once inside our classroom, I slipped the chocolate box into my desk and prepared to endure a day full of “What’s that spotted thing crawling on your neck?”; “Your zipper’s undone”; sugar in the salt shaker and salt in the sugar bowl tales; and shouts of “April Fool!” from everyone. By afternoon recess, we were all pretty tired of April Fool’s Day. We played Red Rover, and no one cracked even one April Fool’s joke.

We returned to the classroom, and I took the box of chocolates out of my desk. I asked our teacher, Mrs. Humphries, if I could share them with the class. All my friends perked up. As I walked down the rows, each delicious hand-dipped chocolate was carefully chosen. Mrs. Humphries chose hers last — a cherry chocolate, her favorite. Then the moment I’d been waiting for came. I closed my eyes to listen as each mouth opened, as each tooth broke the chocolate shell, as each tongue savored the center. Gasps and laughs and groans. I opened my eyes to see that mints were carrot slices, caramel brazils were celery ribs, butter brittle chips were cardboard squares, butter creams were radishes, and cherry chocolates were pearl onions. “Happy April Fool’s Day,” I shouted!

My father has retired, but the candy company and restaurant are alive and well under separate ownership. I’m still able to read the language of chocolates (my second language when growing up) and know what’s inside each candy without having to poke my thumb in the bottom ... unless it’s April Fool’s Day.