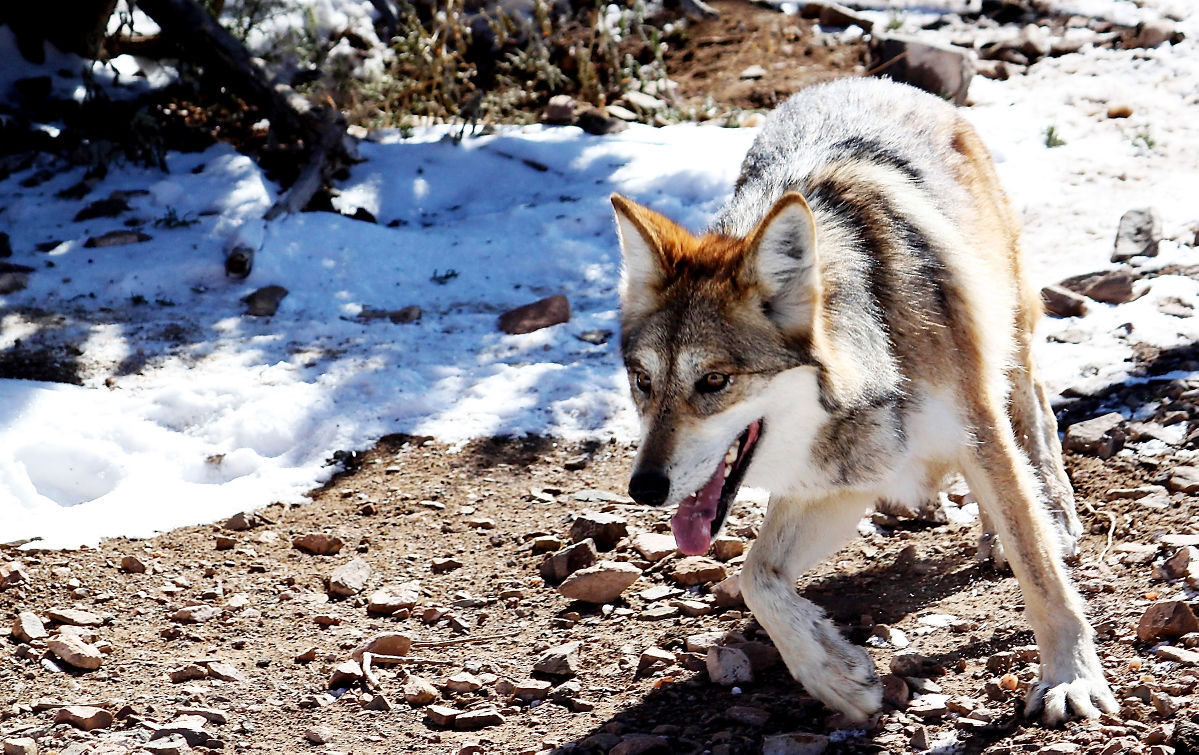 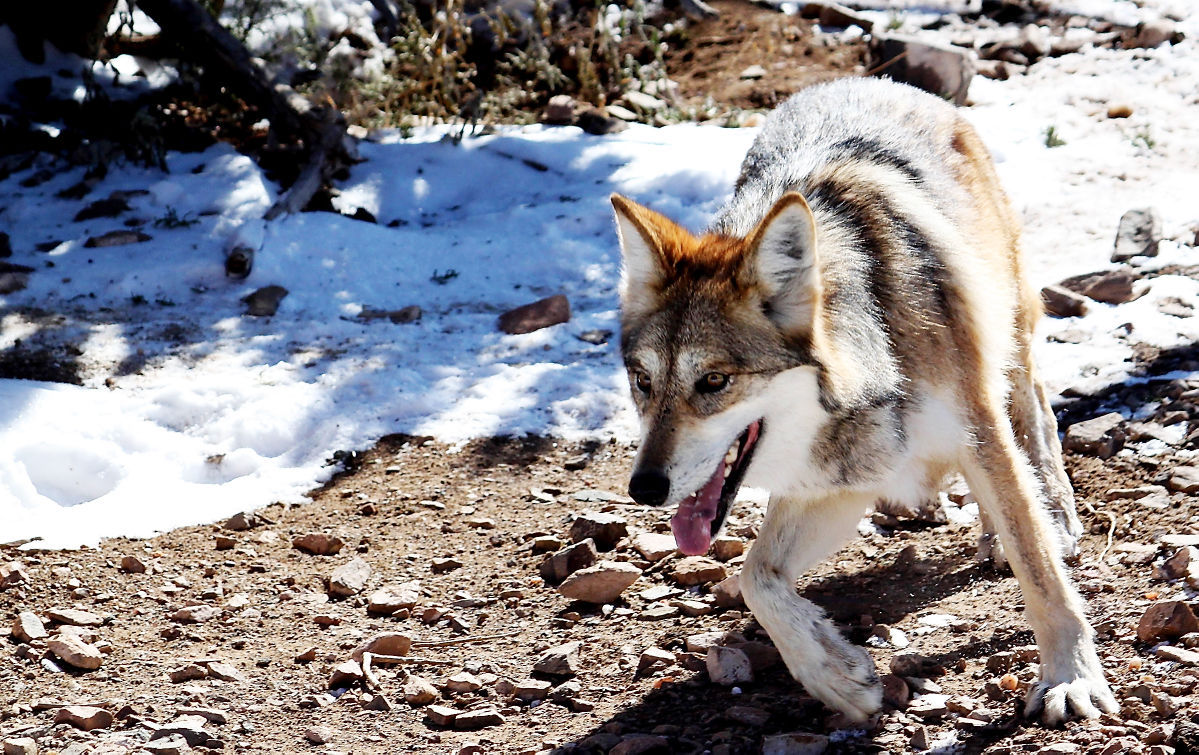 A female Mexican gray wolf looks to avoid being captured for its annual vaccinations and medical checkup at the Sevilleta National Wildlife Refuge in central N.M.

A female Mexican gray wolf looks to avoid being captured for its annual vaccinations and medical checkup at the Sevilleta National Wildlife Refuge in central N.M.

The Utah Division of Wildlife Resources is doing genetic testing on what is thought to be a female gray wolf found dead a month ago in a trap meant for a coyote.

Kimberly Hersey, mammal conservation coordinator for the Utah Division of Wildlife Resources, confirmed the Nov. 7 incident that was reported recently in which a trapper found the dead animal and reported it to authorities. Hersey said testing is still being done to confirm that it is in fact a wolf and not a dog-wolf hybrid. If it is a wolf, it will be the second time a wolf was killed in Utah in less than a year, highlighting how the state manages — and would like to manage — wolves.

“Thus we need to know if it was indeed a wolf and if any additional wolves or wolf-like animals are in the area,” Hersey wrote in an email. “Biologists have repeatedly visited the area looking for signs such as tracks and scat. They have also used a howling technique to see if any animals in the area respond.”

But biologists have not found evidence of additional animals so far, she said.

“The agency encourages people to report any sightings of suspicious animals,” Hersey said.

No recent wolf sightings had been reported to DWR from the area — just false alarms.

Determining the animal’s identity is important so the DWR complies with the Wolf Management Act, which gives authority to the agency to prevent any packs of wolves from establishing within the delisted portion of Utah — which includes Cache and Rich counties.

Robert Schmidt, a Utah State University associate professor of environment and society in the Quinney College of Natural Resources and a wolf expert, talked about what he sees as the significance of the Randolph incident.

“We should never have to say again we had no idea a wolf might be in the area. Therefore, we need to think about what we should and should not allow,” Schmidt said. “Perhaps there should be no use of neck snares and only non-lethal traps that allow animals to be captured.”

The report of the Randolph incident comes after a wolf nicknamed Echo was mistakenly killed by a hunter who thought it was a coyote on Dec. 28, 2014. That incident, the killing of the first wolf seen near the Grand Canyon in 70 years, drew criticism from pro-wolf advocates.

In 1995, wolves were reintroduced into Yellowstone and central Idaho, and since then the population has grown quickly and spread, with some coming into neighboring states like Utah, according to Hersey.The first modern wolf in Utah was captured in Morgan County and was returned to Grand Teton National Park in 2002. Since then, there have been single or multiple wolves confirmed on about 10 occasions — most in counties bordering Idaho or Wyoming, although some have roamed farther.There are currently no known wolf packs in Utah, Hersey said.

“It’s our responsibility to follow up on sightings and gather in the information we need to,” Hersey said.

Wolves in much of the Beehive State are on the Endangered Species List and under federal control, according to information on the DWR’s website.

In 2011, Congress delisted wolves from the endangered species list in several Western states, including a small northeastern portion of Utah, which includes Cache and Rich counties.

The delisting — however small — gave Utah the authority to manage, capture and kill wolves inside this delisted zone. The DWR has authority, thanks to the Wolf Management Act, to prevent wolf packs from establishing in the zone. The Act also directs the DWR to request the U.S. Fish and Wildlife Service to remove wolves from areas in Utah that are not in the delisted zone.

According to the DWR website, Utah officials want to see wolves delisted across the entire state so they — not the federal government — can manage the population.

“It’s appropriate that it’s transferred back to the state where we have the resources to manage the species,” Hersey said.

Even as the agency waits for potential statewide control, the DWR has come up with a management plan, but only part of it is being implemented because of DWR’s limited control over wolves. The management plan was written shortly after the first instance of wolves appearing in the state, Hersey said.

“It was trying to be proactive, having a plan in place so that when management authority was transferred from the federal government to the state, we wouldn’t suddenly say, ‘What do we do now,’” Hersey said, noting the plan would likely be revised if and when Utah gets full control over U.S. Fish and Wildlife of the wolf population in Utah.

Schmidt did not have a comment on the plan, but said the Randolph incident is a reminder that Utah needs a plan to deal with wolves.

The USU associate professor said it’s part a learning curve in a state that is just getting to know wolves.

“All of these wolves come from our sister states so we’re only going to have more,” Schmidt said. “We’d better come up with a system where everyone is on the same page so we know that wolves are out there and we know what to do when a wolf is caught and minimize the chance that a wolf is accidentally killed.”