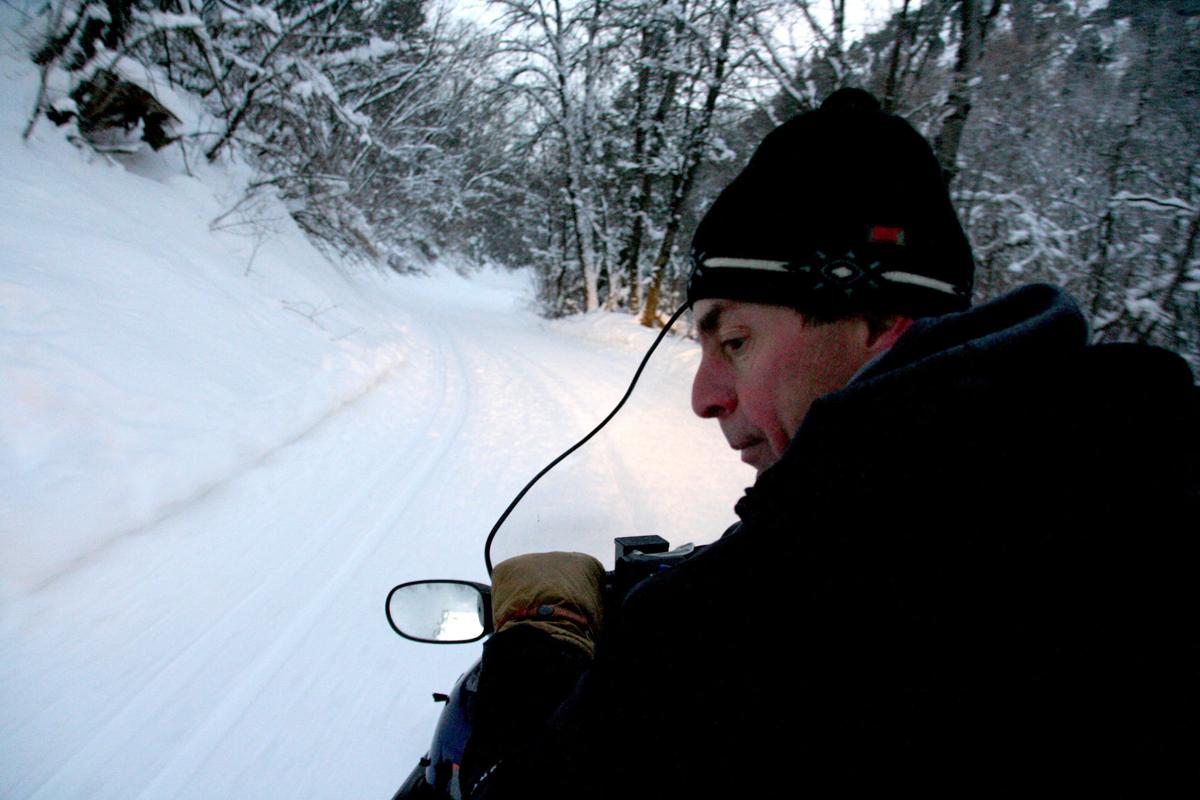 Gino Pearson checks the height of the grooming device on the back of a snowmobile in Green Canyon. 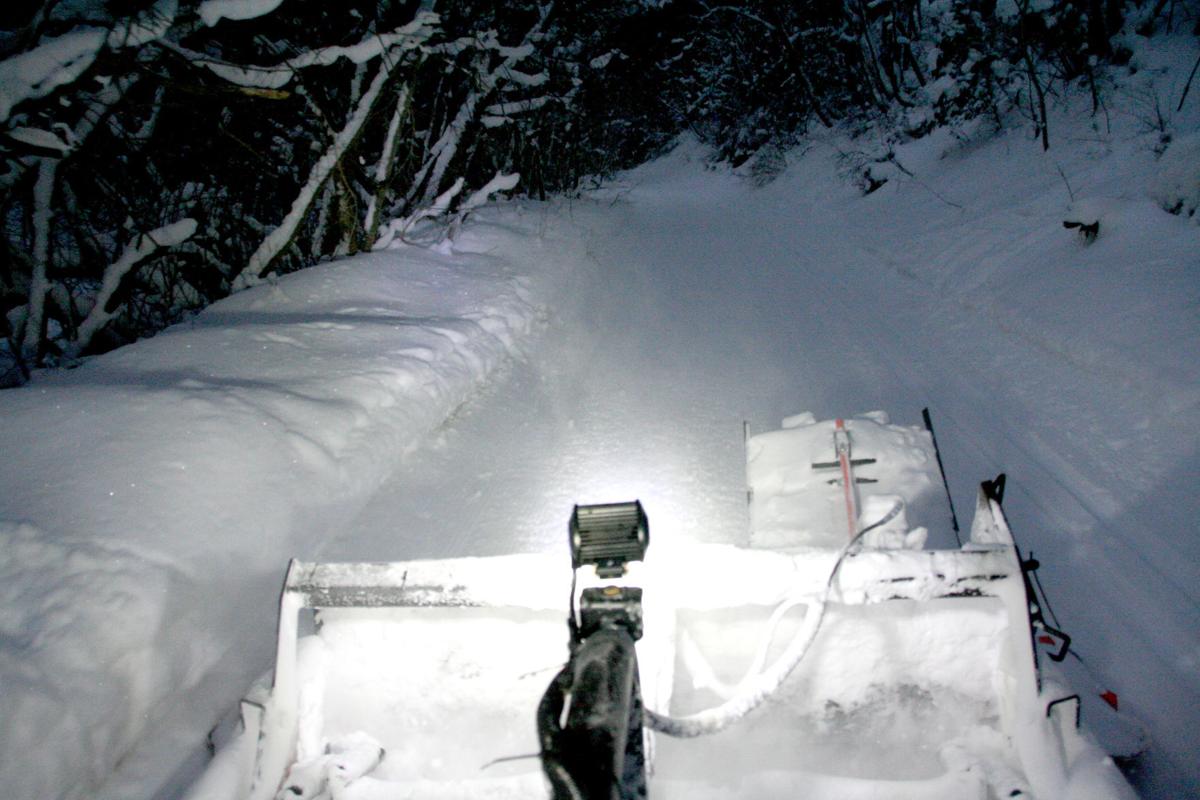 A Ginzu, a device that conditions snow for skiing, is pulled behind a snowmobile.

Gino Pearson checks the height of the grooming device on the back of a snowmobile in Green Canyon.

A Ginzu, a device that conditions snow for skiing, is pulled behind a snowmobile.

It’s pitch black when the trail groomer starts the first run. The headlights of the snowmobile twinkle against the snow, mirroring the stars above. It is quiet at this hour.

Gino Pearson hooks the Ginzu, a trail grooming device, to the back of the used snowmobile. I hop on the back and we head into Green Canyon.

It’s 6:45 on a Saturday morning, but skiers are already on the trail. Pearson slows to a stop as we approach a tall man with skinny skis. He thanks the groomer for keeping the trail in good shape.

A few hundred feet further up the canyon is a petite woman hugging the side of the trail, bundled up in a fuzzy hood and a scarf. She waves as the snowmobile passes.

The headlamp of a snow bike waits ominously atop a ridge, waiting to crisscross the Nordic skiing trail.

Pearson has been involved with Nordic United for years. Last month he took over the reins as president. The nonprofit organization is a collection of backcountry and cross-country skiers who regularly groom at least three trails in Cache Valley and encourage non-motorized winter recreation. They are supported by donations and membership fees ranging from $10 to $250 per year.

“Everything we do is volunteers, so we like to have people join,” Pearson said.

A good chunk of the funding goes to maintaining the snowmobiles, which get an overhaul every year. The 4-mile track up Green Canyon is usually groomed three to four times a week with a rotating roster of volunteers.

The volunteers also groom Beaver Bottoms and Sink Hollow, both located below Beaver Mountain. Depending on the weather, they will groom a trail at the Logan River Golf Course and a track in Nibley.

The morning light starts to reveal the silhouettes of the canyon. The biting cold and wind chill seep through my cheap gloves. Pearson lends me a pair of liners and hand warmers. He regularly glances back to check the height of the two rows of tines, which break up the snow, to make sure he isn’t pulling an igloo. Behind them, a grooved rubber mat creates the textured corduroy.

The track, two grooves wide enough for a pair of skis, is rock solid so Pearson won’t bother cutting a new one.

A Nordic trail has two basic uses. A flat area, about 8-feet wide, is used for skate skiing and the two carved tracks are used to hold skis for shuffling. Pearson compares skating to trail running, while shuffling is more like walking pace. He said he can skate up and down Green Canyon in about an hour, while groups will often take an afternoon with a pack of food and hot drinks to shuffle on the track.

The modern work schedule, Pearson said, allows flexibility. A steady number of skiers will come out for a pass before work, during their lunch break or in the evening. The Green Canyon trailhead is about a 10-minute drive from Logan.

At the top of the trail, a collection of skis and poles stick out of the snow surrounding a circular yurt. With a reservation, skiers can sleep in bunk beds, keep warm around a wood fireplace and cook over a stove. It provides an opportunity to explore the backcountry beyond the groomed trail and then come back to a warm shelter.

Backcountry skiers break their own trail through deep snow, usually working their way to a ridge, and then ski back down. In untouched snow, a backcountry skier can sink down to their knees or ankles.

For cross-country beginners, Pearson recommended renting gear from a local outdoor shop and giving the Green Canyon trail a shot. There usually is no need to worry about wax, as the worst thing a skier can do is lose control on the way down. It can also be much colder on the descent, so he advised skiers to wear layers that can be added or zipped up to block the wind.

Cross-country skis, compared to downhill skis are longer, thinner and have more of an arch to provide a boost forward. There are several different methods for cross-country skiing, each with different specialized gear, technique, wax and speed.

Pearson said cross-country skiing is an ideal full-body workout. It works the legs, core, arms, back and chest.

“If you’re really doing it the full way, you’re getting a lot of exertion, a lot of work … a lot of power,” Pearson said. “And if you’re just out there having fun, it’s still a good thing to do.”

On the descent, the full beauty of Green Canyon is revealed. Towering evergreen trees rest below snow-capped cliffs. Ice-encrusted branches reach out overhead. A mule deer stares behind foliage. Back near the parking lot, Pearson heads back up for a second run, and I go home to a hot shower.

For trail information or to make a donation, visit www.nordicunited.org.