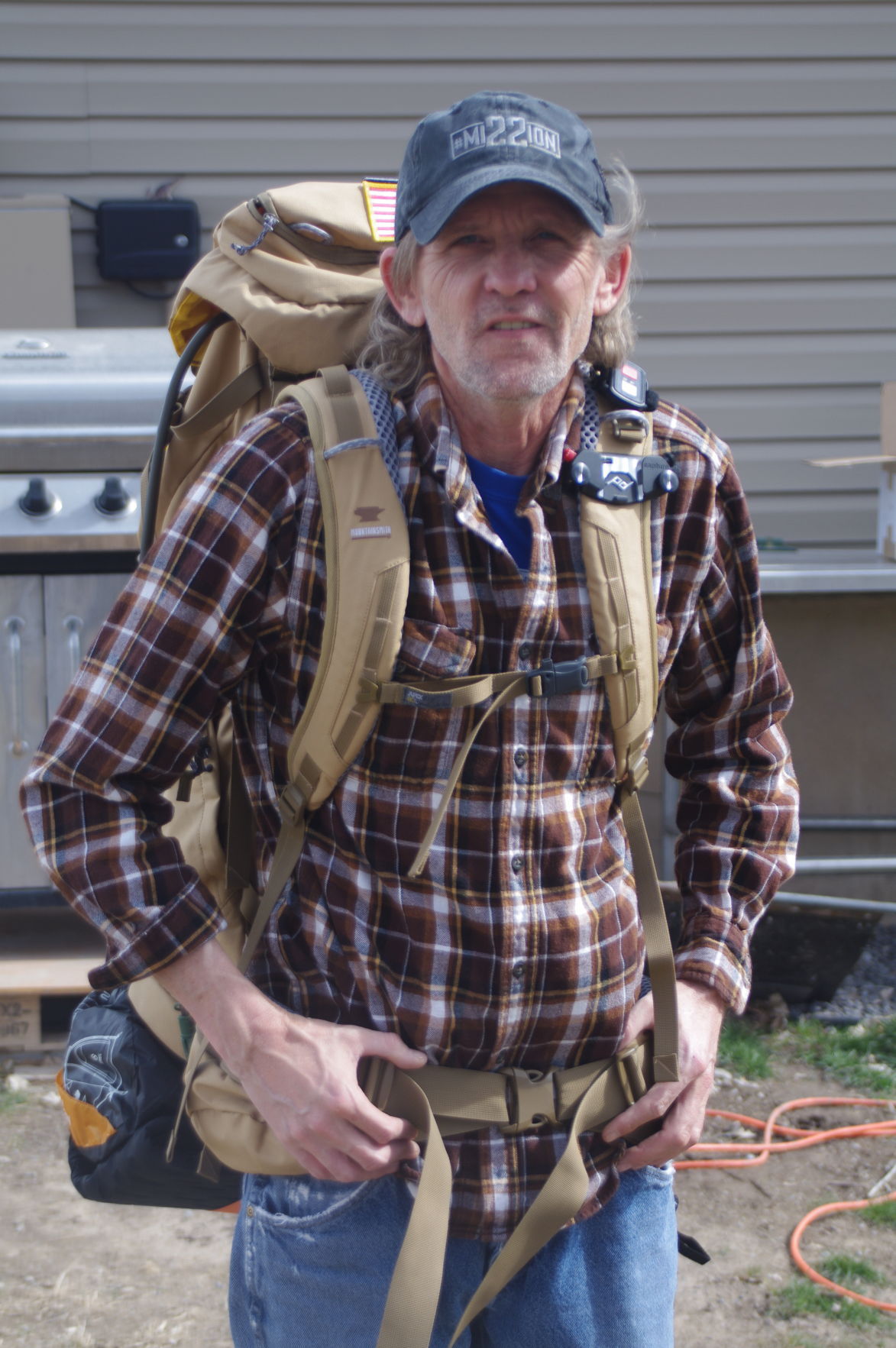 Scott Lawson poses with his backpack on Friday, March 9, at his home in Thatcher. Lawson, a Navy veteran, has teamed up with a veterans’ organization called Mission22 and will be embarking March 30 on a quest to complete a hike-through of the 2,500-mile Pacific Crest Trail to raise awareness of the high 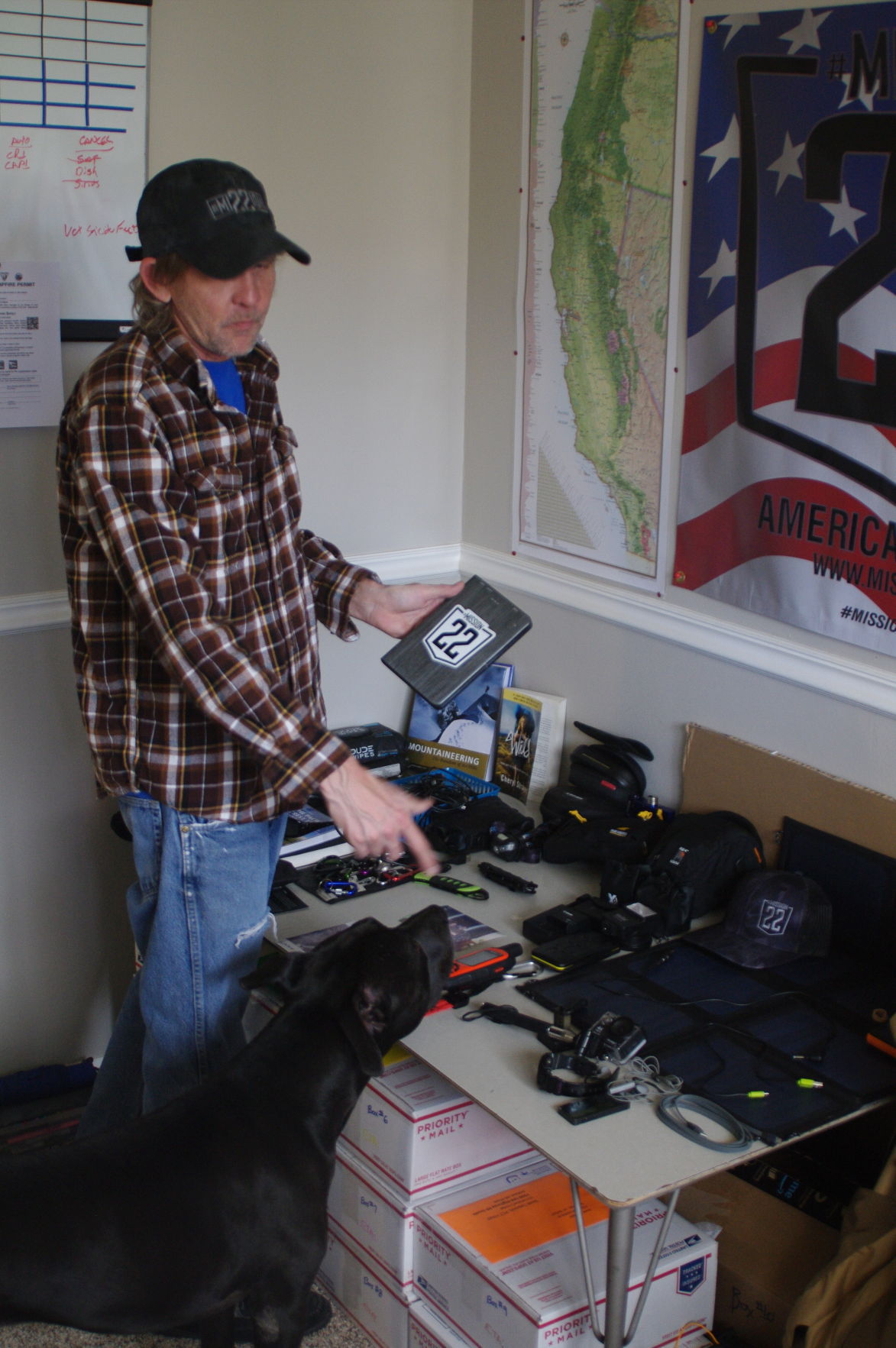 Lawson holds a battery pack he will use to charge his electronic devices while on the trail.

Scott Lawson poses with his backpack on Friday, March 9, at his home in Thatcher. Lawson, a Navy veteran, has teamed up with a veterans’ organization called Mission22 and will be embarking March 30 on a quest to complete a hike-through of the 2,500-mile Pacific Crest Trail to raise awareness of the high

Lawson holds a battery pack he will use to charge his electronic devices while on the trail.

Scott Lawson has lost a brother, an uncle and a good friend to suicide — two of them related to post-traumatic stress or other mental illness from their time in the military.

He even attempted to take his own life twice, but now he’s embarking on an epic journey with a purpose. On March 30, Lawson will start heading north from the Mexican border toward Canada on the Pacific Crest Trail, all in the name of raising awareness for the all-too-common incidence of veterans committing suicide after their service has concluded.

Lawson quit his job as a truck driver about two weeks ago and for the past several months has been studying maps, getting supplies together and learning as much as he can about the legendary trail, which draws thousands of hikers every year (about 10 to 12 percent of those who attempt the Mexico-to-Canada trek are successful).

He plans to spend roughly the next six months on the famous trail, with the goal of raising $100,000 for a veterans’ suicide awareness organization called Mission22. He’s one of a dozen or so Mission22 “ambassadors” who are hiking for the cause this year.

“I teamed up with them because 84 percent of all donations go straight to helping veterans,” Lawson said.

A 12-year veteran of the Navy, Lawson said he’s hoping to draw attention to the many thousands of veterans who slip through the cracks of the Veterans Administration health care system every year.

“When I was in the Navy I had a great support system, but with the VA, you’re just like a number,” he said. “They have to process so many of us.”

Lawson said he attempted suicide a couple of times while on active-duty. The first attempt was dismissed as alcohol related. In November 2000, he attempted again but some local police officers intervened and turned him over to the Navy. He received minor mental health care and out-patient care for alcohol dependency. Several months later, July 2001, his younger brother, Joey, committed suicide.

He received an honorable discharge from the Navy upon leaving the service in 2002. His uncle, Luke, a Vietnam War Veteran, was instrumental in helping him cope with my brother’s death. In 2007, Luke also took his own life.

“I learned recently that a good Navy friend, Joe, committed suicide,” Lawson said. “There are several other veteran brothers I know whom were diagnosed with depression, post-traumatic stress and/or traumatic brain injury that have committed suicide.

“I have struggled and lived with suicidal ideations long enough,” he continued. “While recently contemplating whether or not life was worth living, I came across an Army Veteran’s mission hiking the Pacific Crest Trail. Watching his journey has inspired me to hike the PCT on a personal journey seeking answers and to help Mission22’s goal of ending Veteran Suicide in America.”

In the middle of the home page of the Mission 22 web site, a grim statistic is spelled out in large letters:

“YESTERDAY OVER 20 VETERANS WERE LOST TO SUICIDE.”

Lawson served onboard four ships and two shore commands. He served in the Navy from 1990-2002, with an initial deployment to the Persian Gulf for Operations Desert Shield and Desert Storm. He was also deployed to Somalia for Operation United Shield. He was awarded a Navy-Marine Corps Commendation Medal, four Navy Achievement medals, numerous unit/campaign awards and letters of commendation/appreciation.

Despite his distinguished career, the stress of the combat theater was enough to drive him to attempt to take his own life, and he just wants to do whatever he can to prevent others from reaching that point of desperation.

He reached out to county leaders about his journey, and by working with County Tourism Director Joan Hammer, was able to get a copy of his Mission22 banner placed on the county courthouse building.

Lawson will have a GPS unit on him throughout the hike, and will be chronicling his journey for all to witness, including the ability to track his progress in real-time through the Mission22 web site. He’ll be shooting plenty of photos, and you can follow him on his journey through his web site, https://scottsmission22-pct-journey.

As he continues to prepare for the next couple of weeks, Lawson has been reflecting on what this 2,650 will mean not just for himself, but for all the veterans, both alive and departed, that he is hiking for.

“I think a lot of questions and answers will be taken care of,” he said.