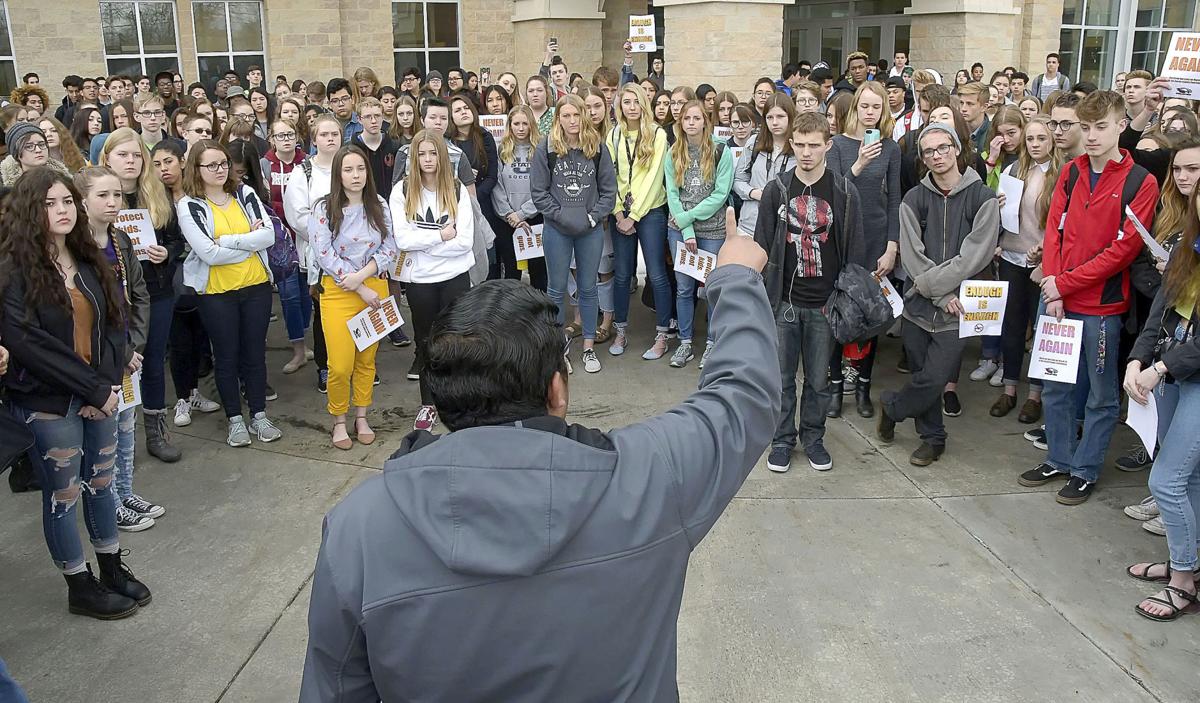 Josh Velazquez speaks to students outside of Logan High School during a walkout to protest gun violence Wednesday. 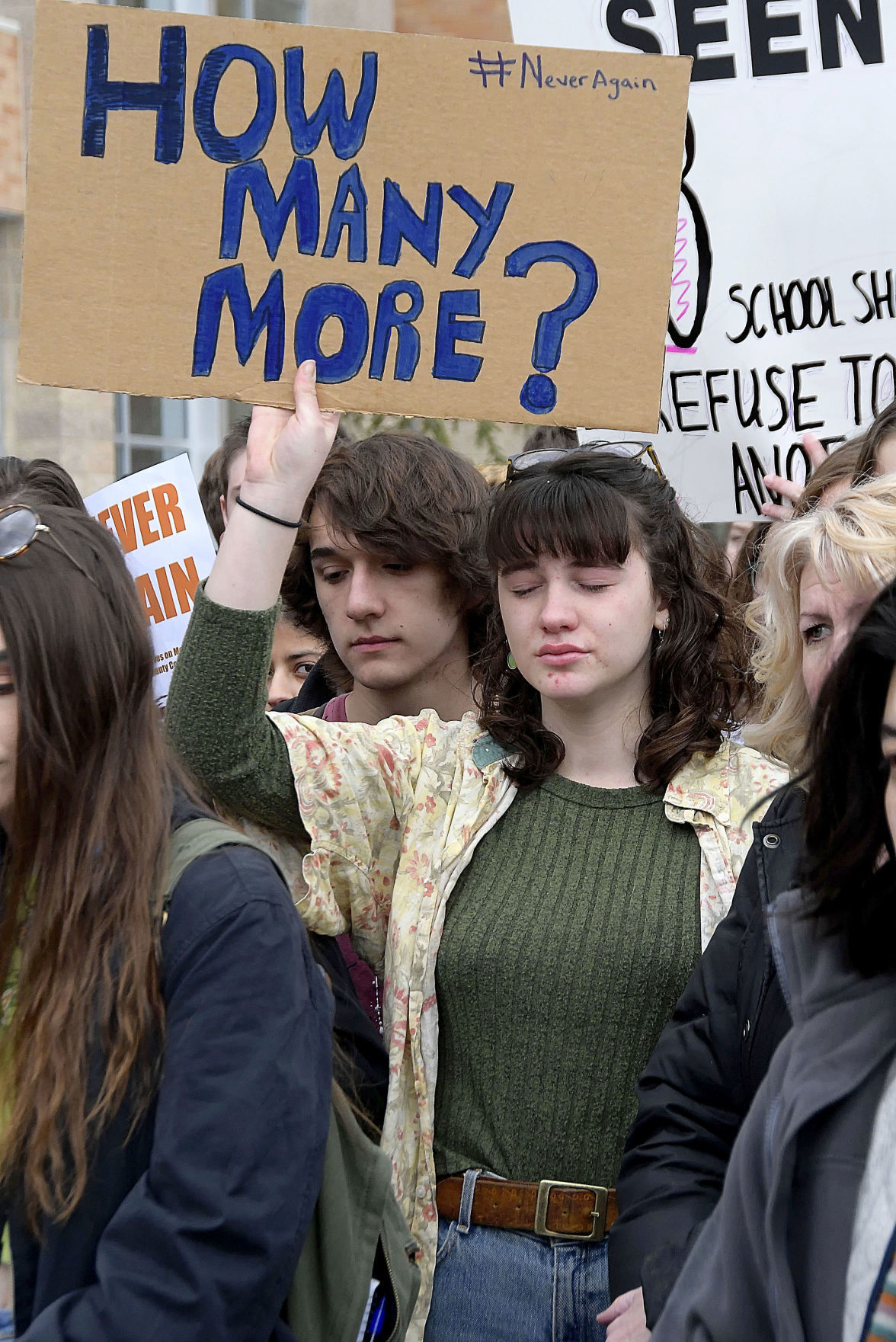 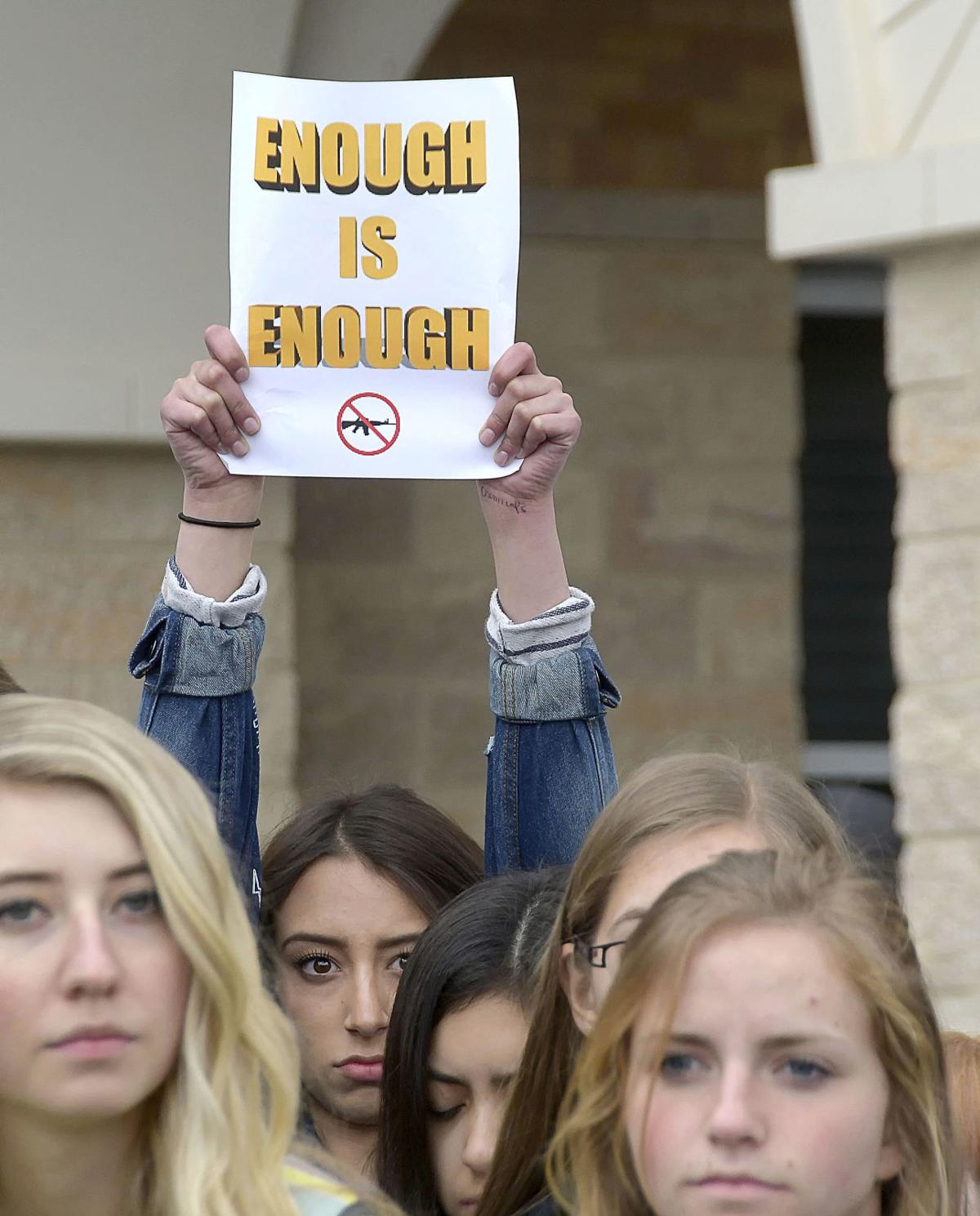 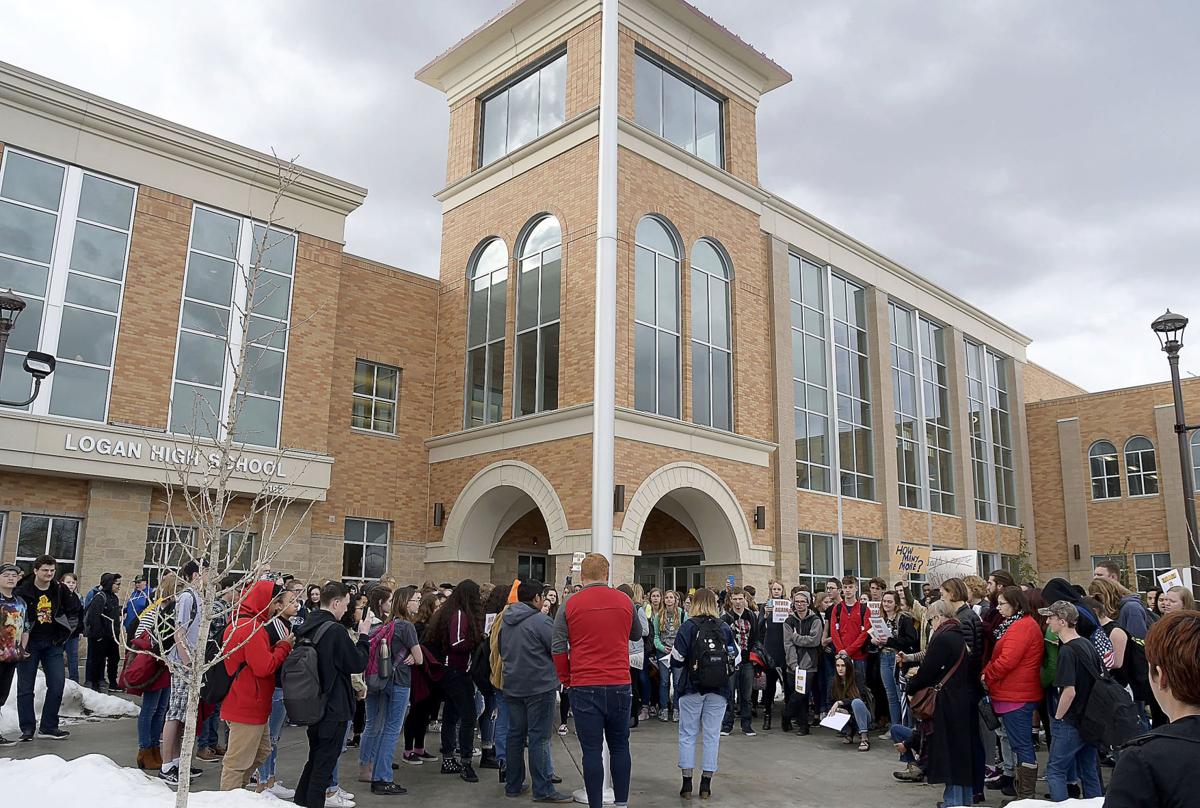 Mountain Crest students are seen gathering outside the ICON Activity Complex on Wednesday morning during the National School Walkout in observance of the Parkland shooting. 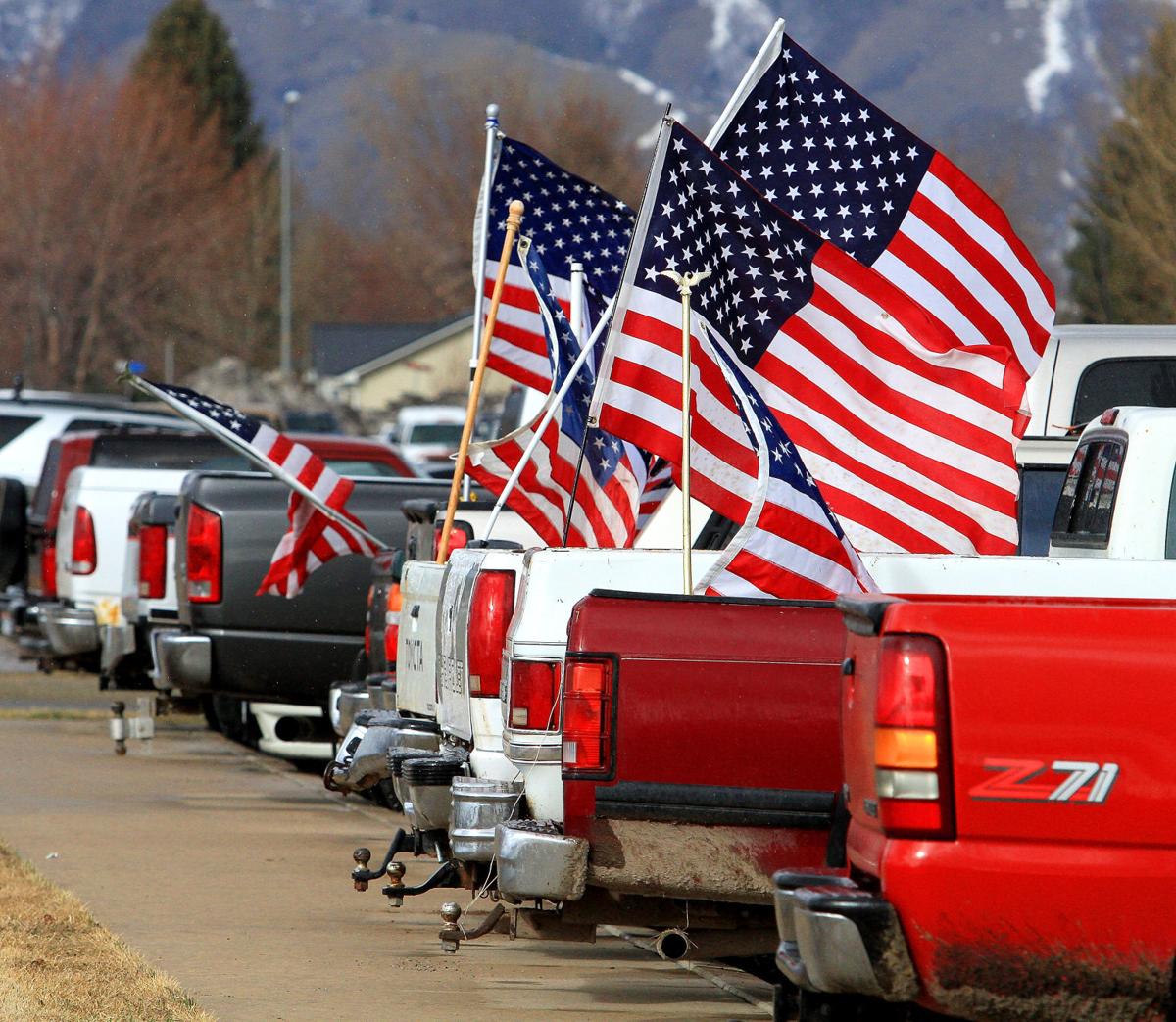 A row of trucks are seen in the Mountain Crest parking lot on Wednesday morning displaying the American Flag from the bed of the vehicle.

Josh Velazquez speaks to students outside of Logan High School during a walkout to protest gun violence Wednesday.

Mountain Crest students are seen gathering outside the ICON Activity Complex on Wednesday morning during the National School Walkout in observance of the Parkland shooting.

A row of trucks are seen in the Mountain Crest parking lot on Wednesday morning displaying the American Flag from the bed of the vehicle.

Logan High School junior Joshua Velazquez said the message was clear. Students walked out of school on Wednesday morning to demand that their federal and state representatives take responsibility for their inaction on gun reform.

“Today we walk out of school but tomorrow we walk into the polls,” Velazquez said, his voice growing hoarse as he shouted to at least 250 students who left class to join the protest in front of the high school, as the American flag flew overhead.

He said the 10 a.m. nationwide school walkout was just the start of a long battle to end the gun violence epidemic — an epidemic that his generation expects to end.

“Do not let your involvement end here; continue to stand up and speak out,” Velazquez said. “We are fighting an uphill battle that will only be won once we disarm hate.”

Amelia Strange, also a Logan High junior, continued Velazquez’s fiery delivery as she recalled her first memories of hearing about gun violence. First, it was Sandy Hook. She said she was 11 when the news came over the radio that 20 children and seven adults were killed at an elementary school.

“I told myself it would never happen again, and then it did," Strange said.

Her second memory was the Pulse nightclub shooting in Orlando, she said. She heard the stories of innocent people trapped in a bathroom as a man with a gun killed nearly 50 people.

“I told myself it would never happen again,” Strange repeated. “And then it did.”

Then, a month ago to the day, a young man killed 17 students at Marjory Stoneman Douglas High School in Parkland, Florida.

“They were in sixth grade just like us when the news broke of Sandy Hook; they too never thought this could never happen to them, but it did,” Strange said. “People our age who shared our hopes and dreams — they were killed when a boy was able to own an AR-15 despite being a reported threat to himself and others.”

After her speech, Strange said she would like to see an assault rifle ban and stricter background checks for all gun purchases. By November of 2020, she said a majority of her peers will be able to vote. They plan to use that vote to kick out elected officials who don’t stand up for their lives.

“It’s time for us to stand up and make a difference,” Strange said.

The mood was somber as Logan High senior Piper Christian read out the names of the 17 Parkland shooting victims, followed by several minutes of silence at the end of the 17-minute walkout. Walkout organizers handed out signs with the words, “Never Again,” “Protect kids, not guns” and “Enough is Enough.”

Danny Beus, chairman of the Cache Democrats, carried his infant in his arms as he watched the Logan High walkout. He said he wants to know his children will be safe when they are ready to attend public school — and the high school students of today are going to be instrumental in making that happen.

“I think they’re fired up; I think they are,” Beus said. “I think we’ll see a lot of voter registration among young people. Good things are going to happen.”

That optimism was shared by Logan resident Sandra Charlson, who came out to witness the walkout with Amy Hopkins, a parent of a Logan High student.

“This generation, I think these guys have the energy to finally do something,” Charlson said. “This is a critical year with elections coming up and I think they understand that the vote counts and they’re going to do what they can to boot people out of office who won’t do anything.”

Charlson said it’s a shame that her generation hasn’t been able to get anything done on gun reform. Hopkins said she blames the National Rifle Association for that lack of action.

“Too powerful,” Hopkins said of the NRA. “Too much money going into politicians’ pockets.”

Just before the clock struck 10 a.m., Logan High Principal Ken Auld said Logan City School District would take a neutral position on the walkout. If a student left class, it would be recorded as an unexcused absence. The school’s administrative assistant said 20 parents had called in to excuse their students before the protest.

In conversations with students days before the walkout, Auld said he told them that the school was not promoting the protest, but they would not prevent students from protesting.

“Students have the right to protest and to do it nonviolently, and that’s their right, and so we’re not going to take their right away, but we can’t endorse that as a school,” he said.

Just before students headed back to class, Velazquez encouraged students to attend two upcoming protest events: “March for our Lives” at 2 p.m. on Saturday, March 24, at the Historic Cache County Courthouse, and another school walkout April 20.

Students at schools in Cache Valley walked out of classes to protest gun violence.

Reporters fanned out to five high schools across the valley on Wednesday morning to document the 17-minute walkouts. An estimated 500 local students joined the protest to fight for gun reform and reduce the number of mass shootings across the country.

At Sky View, more than 100 students stood silently on the steps to the main entrance for 17 minutes. Three law enforcement officers watched from the corner of the band room. Afterward, a handful of students walked past the officers to speak with reporters. One student said she’d heard that some teachers had been supportive, suggesting that technical difficulties might prevent students from being marked absent.

Student McKenzie Stoker said she thinks it’s important to recognize that lawmakers are willing to put restrictions on freedoms of speech, religion and assembly, they’re willing to limit people’s protections against searches and seizure, but there are relatively few limitations on the right to bear arms.

“So this walkout isn’t just to leave school,” Stoker said. “It’s not to take away the right to bear arms. Rather, we’re tired of people dying in mass shootings. We’re tired of students having to come to school and be afraid that somebody’s going to shoot it up. Teachers shouldn’t have to be law enforcement. They shouldn’t have to be on the front lines. Rather, we’re here to learn and not to die.”

After the students spoke with the reporter for a few minutes, an officer approached and in a friendly manner offered to take a group photo with one student's cell phone. The students took him up on it, and he suggested they get back to class once they were done with the photo.

In Hyrum, nearly two dozen Mountain Crest students walking out assembled in a school-selected location between the swimming pool and the gymnasium.

Doug Snow, assistant principal at Mountain Crest, instructed The Herald Journal to leave school grounds as "news media" were not allowed on the campuses throughout the district.

Watching from a Hyrum City sidewalk — nearly 100 yards from the ICON Activity Complex entrance — the students could be seen holding hands and formed into a circle. At one point the students knelt in unison and then stood back up after a time before heading back into the school at the 17-minute mark of the observance.

The school resource officer, Cache County Deputy Michael Richardson, walked the perimeter of where the students were gathered as another deputy sat in a his patrol truck west of the location in front of the school.

Richardson made his way toward the sidewalk where a Herald Journal staffer was observing the walkout after being asked to leave the school grounds.

The deputy spoke a reporter and told them the appearance of someone standing near the roadway raising their arms up toward their face — lifting a camera to take photos — "made his heart skip a beat," because he didn't know if the person was a threat to the students.

Administrators at Mountain Crest sent out a memo to teachers and staff on Tuesday to provide guidance on how to handle the walkout. Part of the memo stated, "The media understands they are not allowed on school grounds during the school day and we want to assure that continues."

While reporters at The Herald Journal regularly visit schools to cover events or to interview students and teachers, CCSD Public Information Officer Tim Smith said said a long-standing district practice has been to prohibit news media from school grounds during the instructional school day unless invited.

At Green Canyon High School in North Logan, a large group of students walked out of class on the north end and around the building before coming to a stop at the east side entrance.

Students had set up a table where they could write letters to families of victims and to policymakers. They had four petitions: "Expand background checks to all gun sales," "Ban assault rifles and high-capacity magazines," "Pass gun violence restraining order law" and "Stop militarizing police act," according to student Brianne Corbridge.

They also had a moment of silence for the 17 victims of the Florida shooting.

Hadlie Huskinson, a junior Green Canyon High School, told The Herald Journal she was at school when the Florida shooting happened, and it made her feel sick.

"I can't even imagine being afraid to go to my own school ― at this point in my life, I spend half my days here," she said. "I knew from right then that I wanted to do something about it, and so I'm glad we have taken on that challenge."

Huskinson said she told everyone who demonstrated on Wednesday that regardless of their beliefs on gun control, “This is about us as students and this is proving to each other that we can help.”

About 50 students gathered around the flagpole on the west side of Ridgeline High School, where they expressed their view that enough is enough. The students were in high spirits, with several taking turns to to share their views on gun control.

With the group chanting “hear our voice!” in the background, Corbin Stettler told The Herald Journal he joined the walkout because he has seen so many people’s lives hurt by “gun problems.”

“It’s not that we don’t face it exactly, it’s just that we haven’t done anything to stop it, and I just feel so strongly about how we need more gun control and more background checks,” he said.

Stettler said he thinks walkout events are an effective way of sharing a message to the rest of the nation.

“I feel like we should try and do more, but I feel like it’s a good step,” he said.

The students ended their 17 minutes of protest with a moment of silence, while Principal Robert Henke quietly observed nearby.