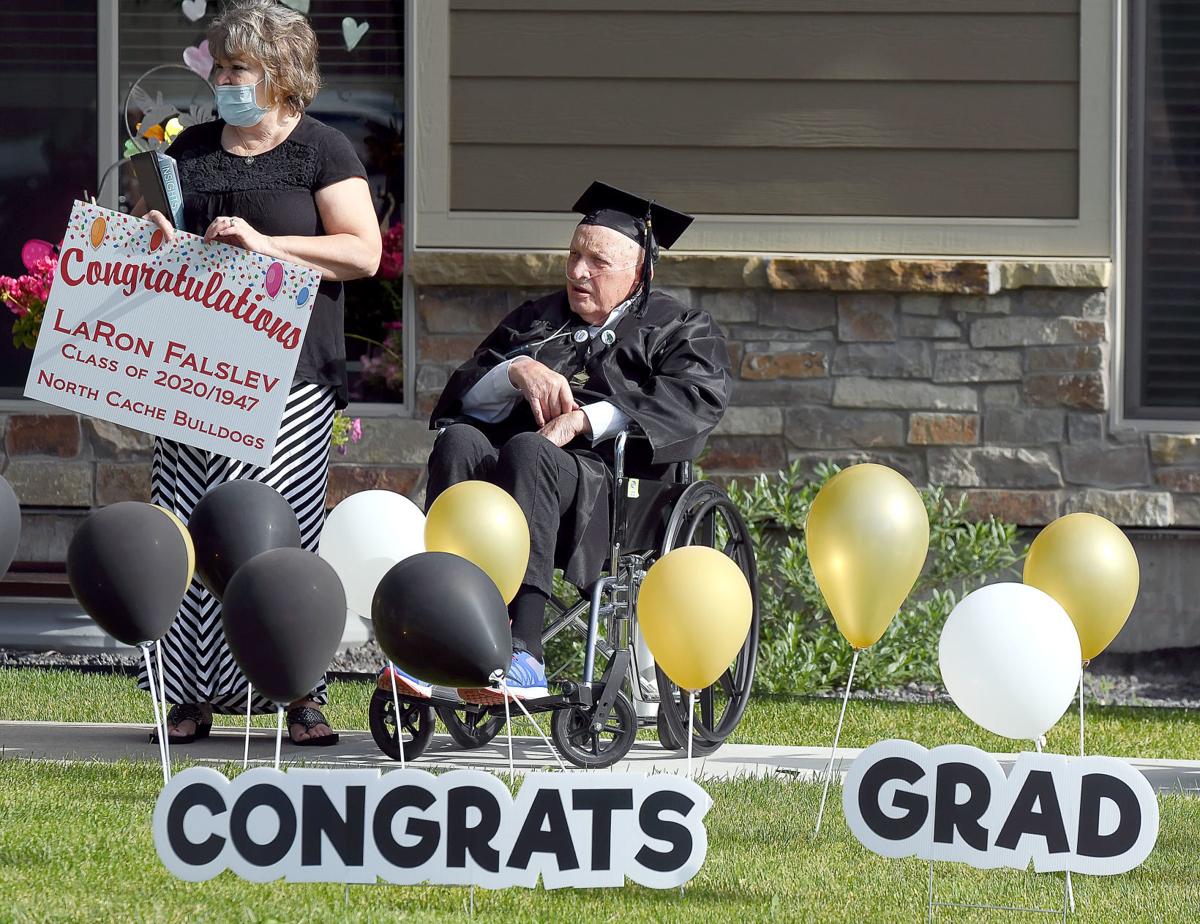 Judy Davis, left, stands next to her father, LaRon Falslev, during his high school graduation party on Thursday at Blacksmith Fork Assisted Living in Hyrum. 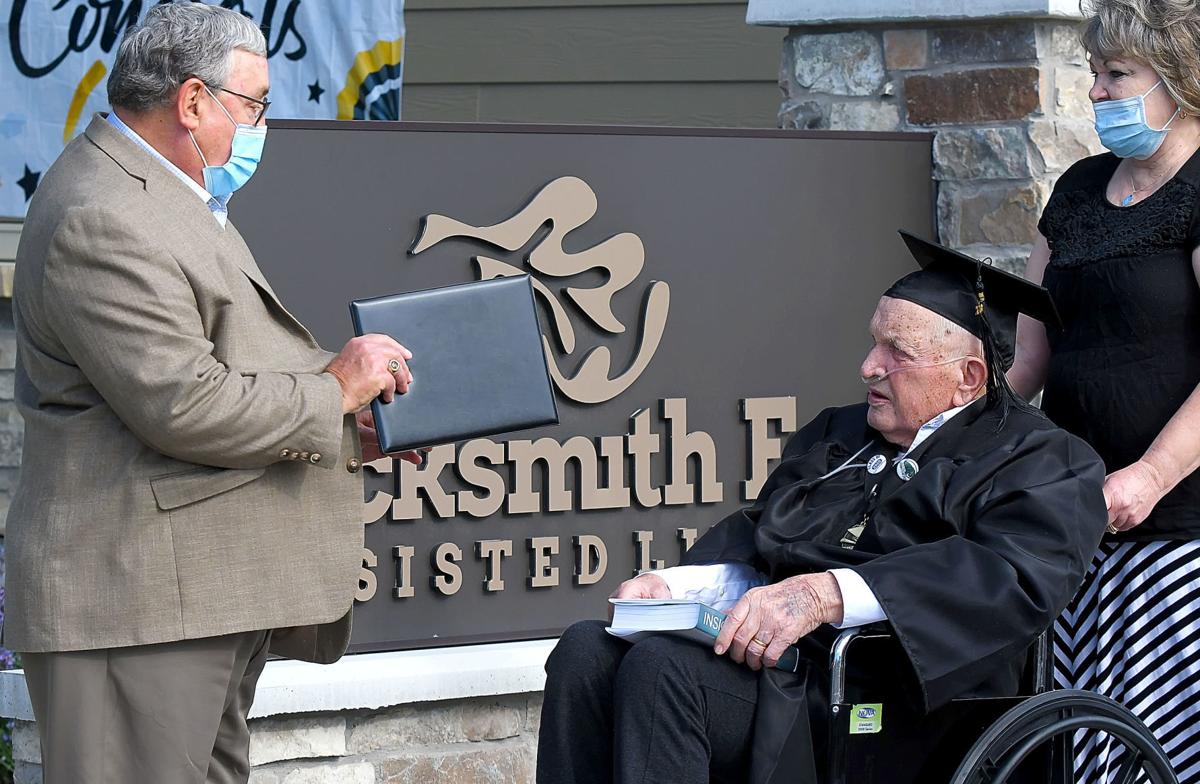 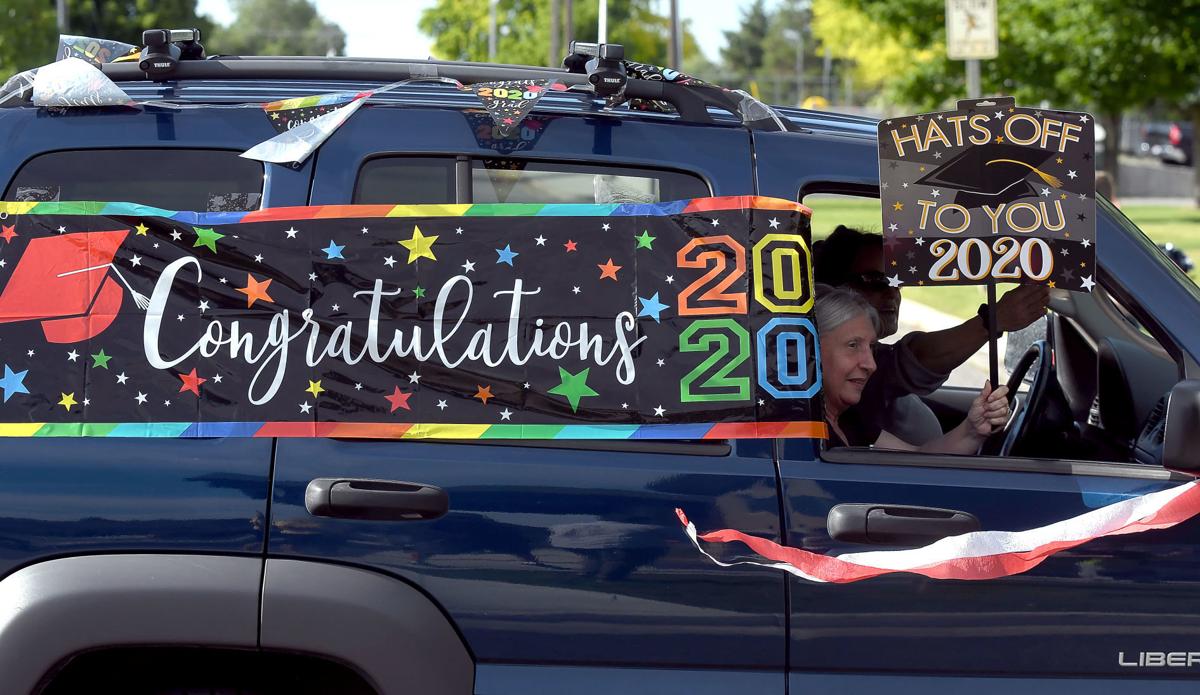 People drive by to congratulate LaRon Falslev during his high school graduation party on Thursday at Blacksmith Fork Assisted Living in Hyrum.

Judy Davis, left, stands next to her father, LaRon Falslev, during his high school graduation party on Thursday at Blacksmith Fork Assisted Living in Hyrum.

People drive by to congratulate LaRon Falslev during his high school graduation party on Thursday at Blacksmith Fork Assisted Living in Hyrum.

After decades of waiting, a Cache Valley man accomplished a dream by receiving his honorary high school diploma at the age of 92.

On Thursday evening passersby championed LaRon Falslev for his achievement during a drive-through graduation ceremony at Blacksmith Fork Assisted Living in Hyrum. Falslev cracked wise about the achievement in an interview with The Herald Journal.

As a youth in the 1940s, according to Falslev’s daughter Judy Davis, Falslev was taken out of school to work on his parents’ farm in Benson when his older brother left to join the Merchant Marines. As one of 10 children, Davis said Falslev was routinely picked to fulfill farm duties and wasn’t able to complete his regular schooling.

“I don’t know why he always got picked to work on the farm,” Davis said, “but he did.”

Falslev didn’t mind farm work; somebody had to do it, he said. But Davis believes her dad relished the idea of school and wished he could have attended ever since.

When assisted living facilities began locking down as a result of the COVID-19 pandemic, Davis decided to stay in the facility with her father. Neither Falslev nor Davis have left the facility since March, leaving plenty of time for conversation.

“We were just talking about it, and he just told me how he wished he would have gotten his diploma,” Davis said.

“This was just such a unique opportunity to be a part of,” Phippen said. “I wanted to do everything I could to help him achieve this goal, because I’ve seen what that can do for some of my other students and the pride that they can take in their life once they accomplish that.”

Phippen said Falslev’s array of life experiences were taken into consideration for the diploma. Falslev received his patriarchal blessing and married his wife Doris in 1950. While his wife immediately went to serve a mission for The Church of Jesus Christ of Latter-day Saints, Davis said Falslev went to Fort Riley, Kansas, and served during the Korean War as a rifleman for the U.S. Army.

“They were married, but only for a few days and then they both took off,” Davis said.

Once he had returned to Cache Valley and reunited with his wife, Falslev bought his own farm in 1957. While working the farm and helping raise a family of nine children, Davis said Falslev also worked at Utah State University as a garbage man for nearly 40 years.

“He calls it the ‘garbologist,’” Davis said.

Falslev later served two yearlong missions with Doris — one in New Mexico and the other in Canada. Davis said he’s also volunteered at the Logan Temple every Thursday for the past 20 years in addition to other gifts of his time.

“He really just has done everything in his life except graduate high school,” Phippen said. “We just felt like this was something that he deserved, and so we were pretty honored to be a part of it.”

Phippen reached out to Cache County School District Superintendent Steve Norton and School Board President Kathy Christiansen and ultimately got the approval for Falslev’s honorary diploma. Phippen even received a letter from U.S. Congressman Rob Bishop in support of Falslev’s diploma.

There was only one hurdle left between Falslev and his diploma — a civics exam. Davis said he scored 100 percent.

“For a dumbbell,” Falslev quipped.