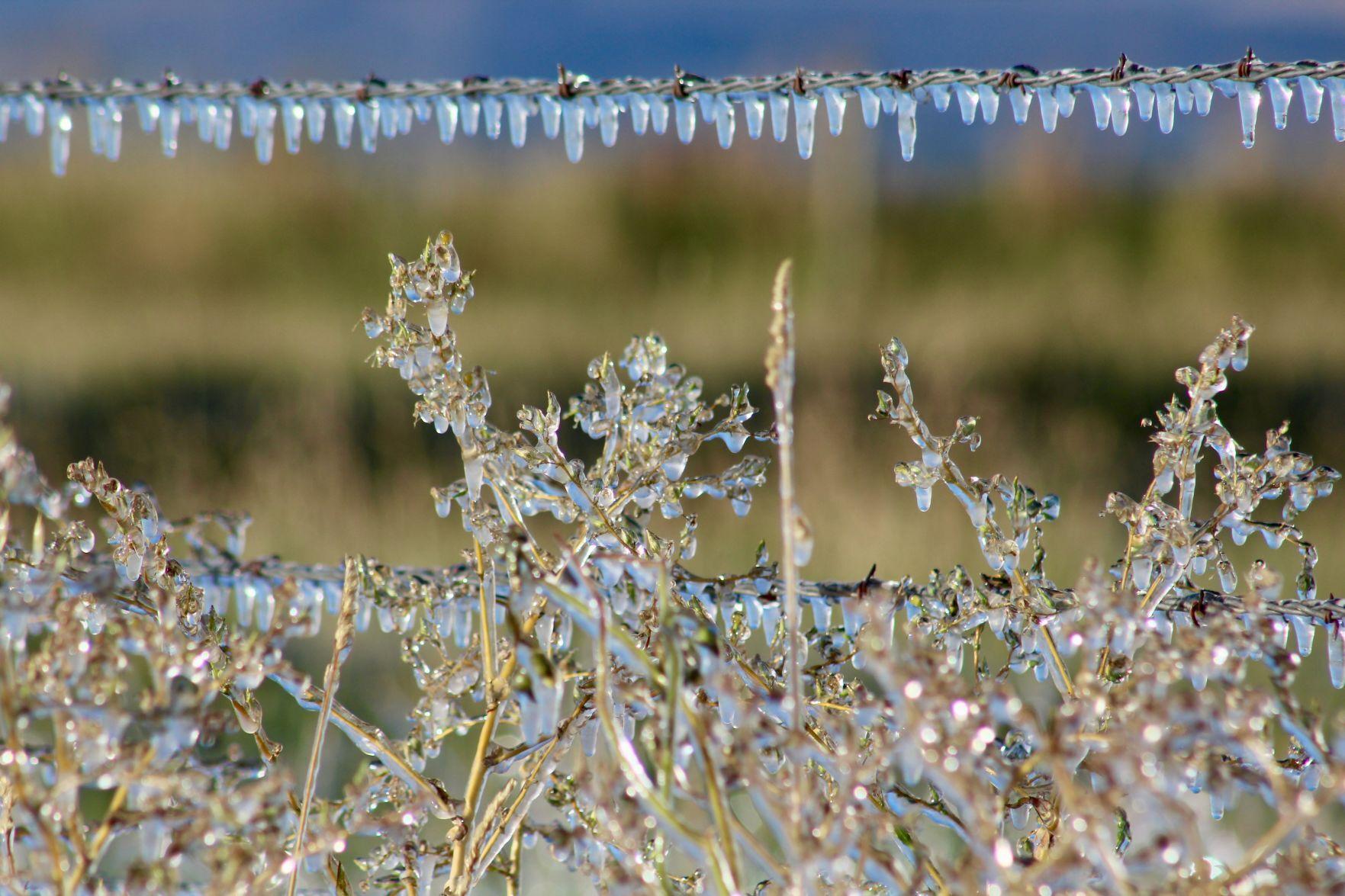 Change in the weather

Temperatures plummeted across the west on Sept. 8, as a cold front brought 50 mph wind gusts to the valley and snow to local mountain tops. Fierce winds as high as 112 mph were reported in the south end of Cache Valley, as well as the Salt Lake Valley and areas north of Pocatello, where many trees were toppled and much destruction to buildings were reported. Temperatures warmed the next day, and highs are currently in the 80s with lows hovering around 51 degrees Fahrenheit.

The September Dayton City Council meeting was a brief affair held in the Dahle Community Center in Beutler Middle school. The reason for the venue change was to facilitate the evening’s main event, a hearing on the changes to the water rates.

The water hearing was separated into two “prongs” as Mayor Melvin Beutler described it. Prong one was concerning the funding of the project. Four sources of funding are available for the project: the Idaho Department of Commerce – Community Development Block Grant (CDBG), a Department of Agriculture Rural Development Loan (DARDL), Idaho Department of Environmental Quality (IDEQ) State Revolving Fund loan program (SRF) and an Army Corp of Engineers (ACE) grant. These four funding sources were combined into three hypothetical scenarios listed from worst case to best case.

During the presentation Aaron Beutler, the project’s engineer, and, Krystal Harmon of the Southeast Idaho Coalition of Government (SICOG), emphasized that the key thing to consider when borrowing government money, of any sort, is to minimize the red tape and legal hoops the water project and the city as a whole might have to jump through.

Aaron reviewed the current water source situation for those citizens who attended. At present, the city has 180 water hookups and can only really support 170 of them in a drought year. The city has three buried water tanks up Dayton Canyon and is currently using two of them as the third one is in dire need of repairs. To be fair, it has been around for 105 years. The two remaining tanks are functioning just below the legal statutes established for water quality. Public water storage should be cycled through every five days to keep the water fresh. Meaning every drop of the water that flows into those tanks on Monday should be out by the following Friday.

At present, the city of Dayton is not in compliance with the laws of the state of Idaho concerning water. The state requires a redundant water source should the city have an emergency.

That could be anything ranging from a fire at the school, to an earthquake sealing off a spring, to the hottest day in July when the city uses over 1,100 gallons per minute at its peak hour demand. That last one has already happened.

The second “prong” of the meeting was a review of the water rate ordinance itself. 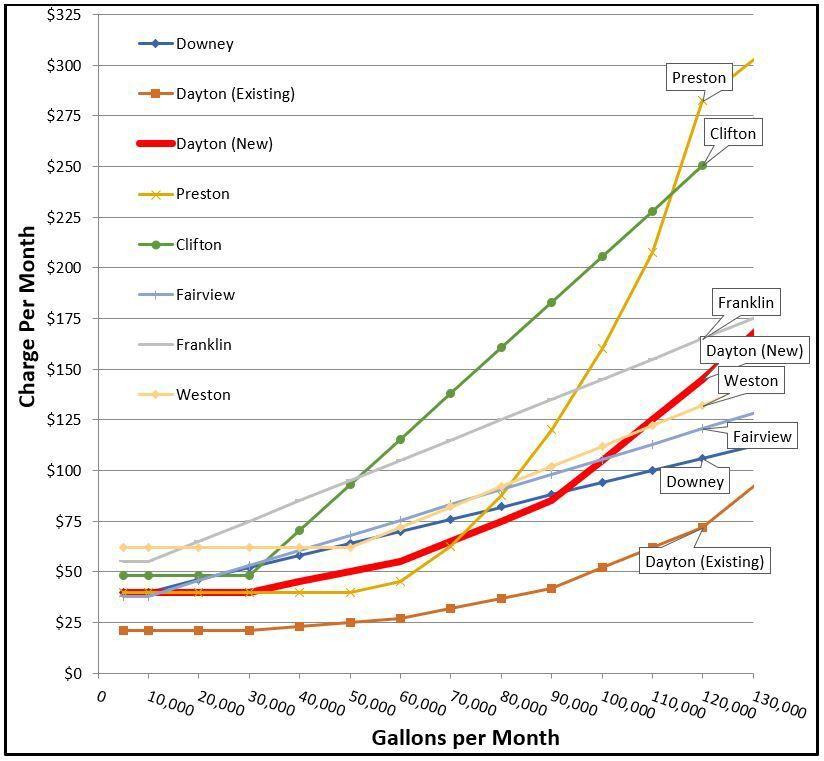 To help ease tension between established residents and incoming home buyers the council will increase the hookup fee from $5,000 to $20,000 so new people are buying into the system. This went largely unchallenged. One of the few changes that happened was that the council originally wanted to combine the pricing and classification for commercial facilities into the already existing “public use facilities.” 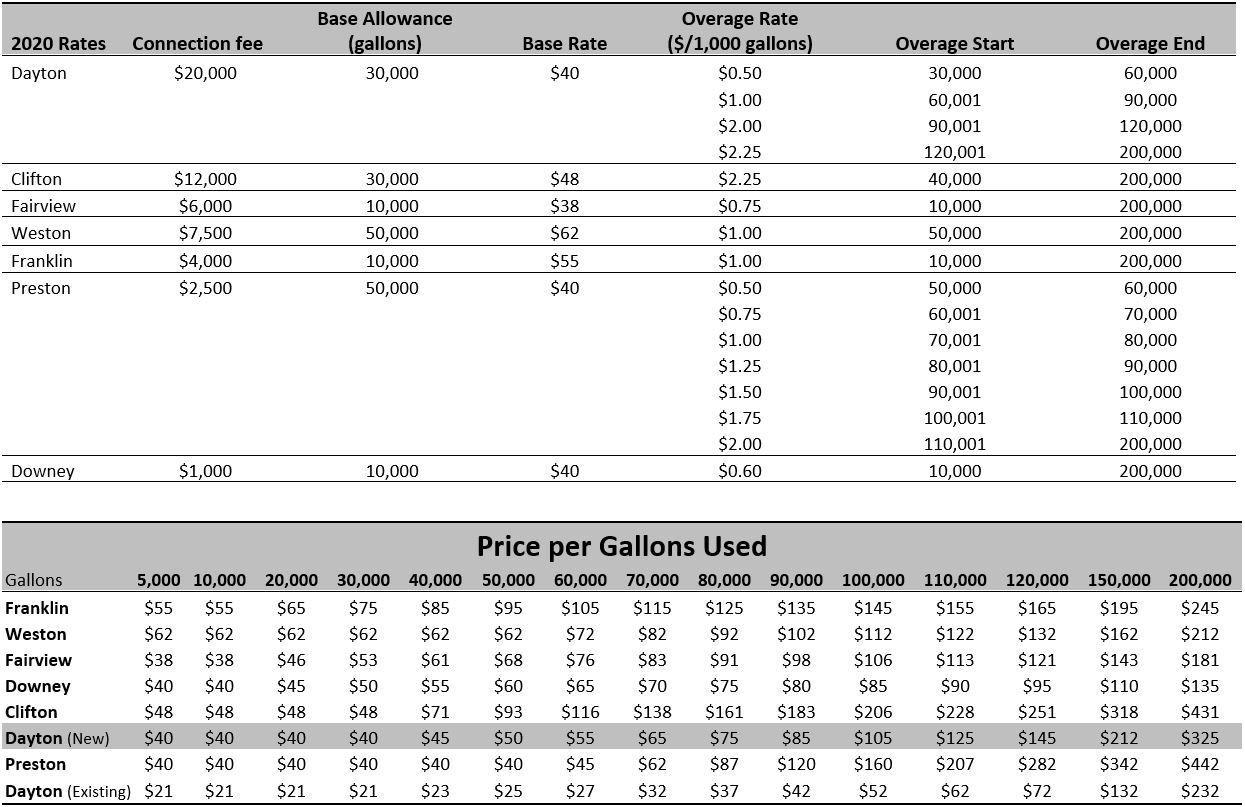 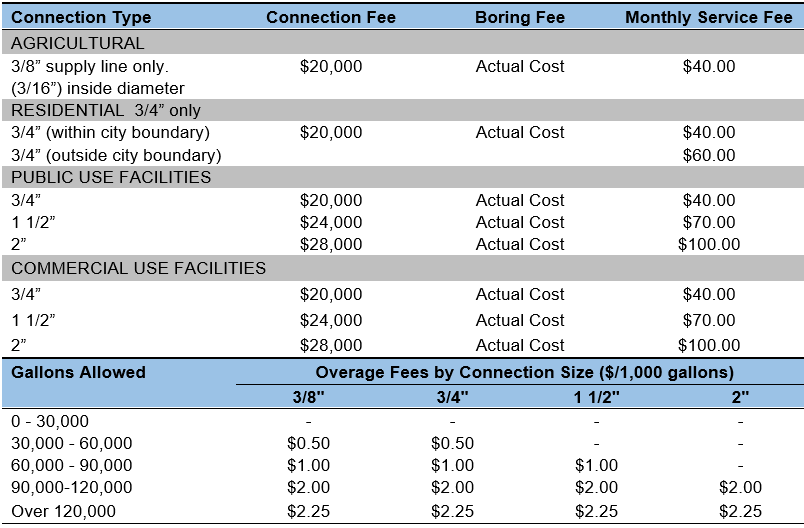 The key issue of the evening can best be summed up in one question: “What is fair and balanced?” Higher hookup fees could mean lower water rates unless they increase them so much that no one wants to move in, meaning water rates go up to make up the difference. Dee Virile Christensen was displeased with the new hookup fee.

Dayton City requires that any parcel of land with an approved and purchased residential water hookup must have construction of a residential structure built on it to utilize that hookup within a year, or the hook-up is automatically sold back to the city. Christensen’s son purchased one such parcel and when the one year deadline passed, he was less than thrilled that instead of paying the original $5,000 he will pay $20,000 when he decides to build in the future. When the subject circled around to one final pass at requiring the council to annually determine and decide water rate increases, he once again opposed the issue but several of the other attendees pointed out that should an annual increase be removed then Dayton residents in 2040 can look back at that very meeting and thank everyone there for yet another rate doubling. It was half joked more than once that everyone would be fine with the new rates until it came time for one of their own kids to pay them.

The council clarified that the automatic annual water rate increase of 3% proposed last month, was deleted from the resolution. Instead, the council stated that the issue of the water rate for the coming year would be listed automatically on all subsequent August budget agendas for the council to consider. The 3% increase was stated due to a table of the average water rate increases in Southeast Idaho which came out to around a 3% annual rate. The city council is allowed to raise water rates up to 5% annually without a public hearing according to Idaho Code 63-1311A.

There is one caveat to the rates discussed during the meeting, that being that they depend on at least two new water hookups each year to bring in an additional $40,000 to help pay for the new wells, if there are no new hookups water rates will increase to cover the cost.

If there is new construction in the city, this new hook-up fee may keep annual water rates down, but the council may increase the water rate each year to compete with inflation, and yet strive to not price anyone out of something so essential as a glass of drinking water.

During the Sept. 9, Franklin City Council meeting the council agreed with Councilman Keith Porter to present the mosquito abatement issue to the public for review. Porter suggested adding a comparison of pros and cons of the issue to the October bills in the city to educate citizens on both sides of the controversy.

The October council meeting on Oct. 14 will include members of the Franklin County Abatement Board to discuss the measures they take to prevent West Nile Virus. Following further discussion, decisions for next summer will be made.

Daniel and Jamie Johnson Trucking, applied for a business license. Daniel has been driving for Sharp Transportation, Inc., for 20 years, but has recently been given the opportunity to lease his truck to own. The license was approved. The Johnsons are also planning to build a double garage onto their home, and have requested a variance to allow the structure to extend to within 10 feet of the side property line. City ordinance allows to within 15 feet, so neighbors will be notified, the request will be posted in the paper, and a public hearing will be held Friday, Sept. 25, at 4:30 p.m., to receive approval.

Halloween observance was the last item of discussion. The three local wards The Church of Jesus Christ of Latter-day Saints have not requested the traditional Trunk or Treat this year, but the city would still like to treat the community. On Friday, Oct., 30, donuts and hot chocolate will be freely distributed in front of the City Hall from 2 — 5 p.m. Young costumed participants are encouraged to go door to door on Halloween night, Oct. 31, and greet neighbors on their porches or driveways to fill their bags with the treasured goodies!

The September Weston city council meeting began with a small revelation: the ordinances for the city of Weston need codifying. At present there is no central source of the city ordinances and there is no simple way to know if they are currently in agreement with current state regulations. That’s where Shannon Ellsworth of Sunrise Engineering comes in, the city has hired her to review the ordinances in their various states and collate them into a single document. When she asked the council why one of the ordinances looked like it had been written on a typewriter the council confirmed that it had been, then joked that they had at least spared her hassle of dealing with the stone tablets. The codifying and double checking of the city ordinances is expected to take a full month.

The next issue was the building permit for Hal Chugg’s new workshop. Chugg does ornate metal work at Utah State University, but wishes to establish his business in Weston. The permit was reviewed and granted on condition it pass the approval of Randi Henry, the city’s building inspector.

Steven Wood, also of Sunrise Engineering, presented the council with updated plans for the well house that is going to be built next to the new water tank. The conversation swirled around various water related subjects including the possibility of replacing the fire hydrants with a better model. The newer model is designed so that should something like a runaway semi run over and shear off a hydrant, Weston won’t have its own Old Faithful.

The final water issue of the evening was brought up by Brent Webb who was seeking to rent some of the excess Twin Lakes water shares that the city has allotted for the park. Councilman Ryan Beckstead was delighted at the prospect of a neglected resource being put to good use.

Mayor Garner took this moment to express concerns of cross contamination (which is when canal water, and any microbes contained therein, backflows into the city water lines resulting in the need to issue a city wide boil warning).

The night ended with a report on the modification to the intersection of 100 South and 200 East since the road itself is in good shape the repositioning of signs has been shelved for the foreseeable future. Instead white cement barriers will be placed there and they will have reflective tape on them so that they can best be seen by passing traffic.