Pam Tinhorn, currently working for Bear River Association of Governments, requested a quarterly meeting with the Franklin County Commissioners at the commission’s April 27 meeting. She hopes to discuss economic development and increase tourism within the county. Tinhorn said she is willing to apply for a Rural Development Block Grant or do whatever she can under the office of the Bear River Area Council of Governments (BRAG) to help improve the local economy.

They then discussed opening county offices to the public. It was agreed that one patron per office would be allowed, and they must wear face masks. Though the offices will be open with these precautions, patrons are to be encouraged to continue to do their business online. 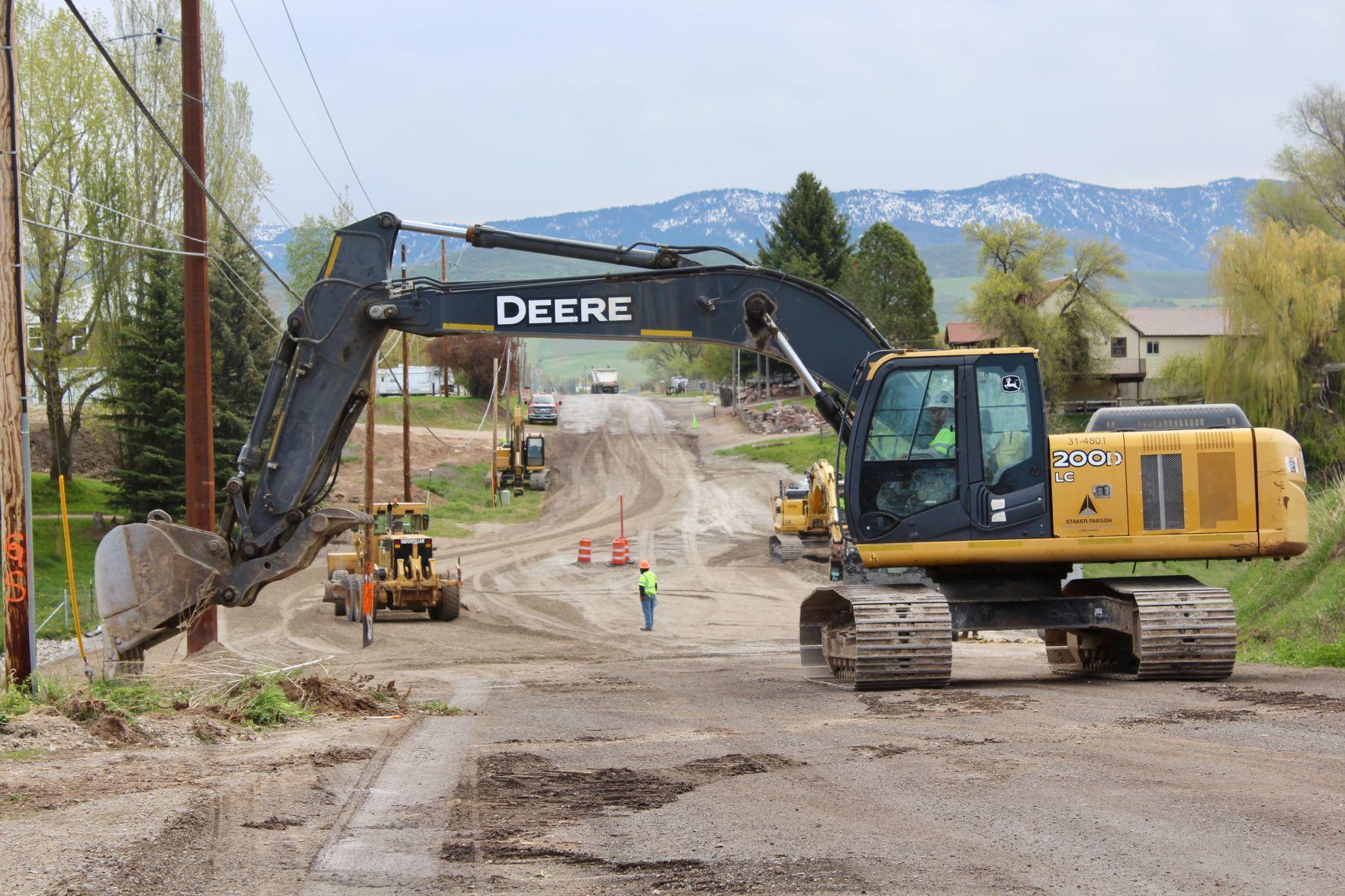 East Oneida closed May 4, as crews begin the second phase of raising the road through the hollows that intersect it on either side of 800 East. The process began in 2018, and is expected to be finished in another couple of years. This phase is expected to last through July. Crews are raising the roadbed in Creamery Hollow, which is within Preston City’s boundaries, with 12 feet of fill and are installing new drainage pipes there. In the county hollow to the east, they will begin building a retaining wall, said Kyle Wood, project manager. Once this phase is completed, the road “has to settle another 12-18 months,” said Wood. “Then we will come back in for last stage: curb and gutter, black top, other amenities,” he said. Wood noted that no traffic will be allowed through the barricades. Local traffic will have to use detours.

Preston High School will hold a live graduation on May 21 provided there are no setbacks in Idaho’s stages of reopening. Though it will be live, the event will look very different than years past.

“This year’s graduation ceremony has come with many unique challenges. We have a plan that will provide the Class of 2020 with the chance to walk across the stage, receive their diploma, and celebrate with close family members in full cap-and-gown regalia, while adhering to state and county guidelines for public health,” said superintendent Marc Gee in an announcement to seniors and their parents.

“Each student’s parents or legal guardians will be allowed to accompany their graduate and film and photograph their student’s diploma walk during preplanned ceremonies at the school. While attendance will be limited, in this way students and parents will be able to experience a unique commencement exercise,” said Gee.

All state and county guidelines for public health, including social distancing, will be followed as graduates receive their diplomas. PHS will inform students and parents of the time to go to the school.

“The remainder of the graduation ceremony, including speeches by the valedictorians and salutatorians, will be presented virtually.”

“We’re very pleased that we were able to offer an appropriate way to provide our deserving seniors the recognition they deserve while maintaining the safety needed at this time.”

The number of family members attending the live portion will be limited to 10 and a parade of graduate cars is planned for later in the evening, giving the community an opportunity to participate with the graduates in celebrating and recognizing their accomplishments.

“As we are fully aware, circumstances change,” Gee said. “The above plan may change as well. This is all new and unusual. We ask everyone involved to please exercise patience.”

The White House is highlighting Idaho as a leader among states for plans to safely and responsibly reopen the economy and for how the state has allocated federal relief funds.

Preston native, Brandon Woolf has also been noted for his role in the process.

“We are encouraged to see so many states embracing the phased approach to reopening their economies that’s contemplated in our guidelines for Opening Up America Again. Governor Brad Little of Idaho released ‘Rebound Idaho’…that will consist of four phases and require specific criteria that Idaho and businesses need to meet to begin to reopen,” Vice President Mike Pence said recently.

Governor Little approved his Coronavirus Financial Advisory Committee’s recommendations for the allocation of funds from the Coronavirus Aid, Relief, and Economic Security (CARES) Act. The full breakdown is available at https://coronavirus.idaho.gov/coronavirus-financial-advisory-committee/.

Two-thirds of the federal funds that have been allocated so far in Idaho – more than $300 million – will go directly to small businesses in the form of cash grants and cash for personal protective equipment to support workers and customers. No other state is putting up more money to directly support small business.

Idaho received $1.25 billion in April as part of the CARES Act. Approximately 36-percent of the funds have been allocated so far, and the rest remains in a state account to cover any extraordinary and unanticipated expenses that may arise.

All expenditures of the CARES Act funds will be made available at Transparent.Idaho.Gov, State Controller Brandon Woolf’s web site that shows Idaho citizens how taxpayer dollars are being spent.

“Our priority is to directly support small businesses as much as possible as we prudently and judiciously expend these taxpayer dollars. I want to thank President Trump, our congressional delegation, and our champion of transparency State Controller Brandon Woolf, for their support,” Governor Little said. Woolf is a 1991 graduate of Preston High School.

Small businesses can begin applying for the Idaho Rebound cash grants today. Information on how to apply is at https://rebound.idaho.gov/idaho-rebound-cash-grants-for-small-businesses/.

Weston Councilman Scott Vasholtz called for groundwater testing for the town once 13 tons of plastic waste has been cleaned up north of the Logan City landfill. Located near Clarkston, the landfill is spilling over the state border. To say the Weston City Council was displeased with this development would be an understatement and Idaho’s Dept. of Environmental Quality (DEQ) has investigated the garbage blowing through fields.

The redundancy well needed to complete Weston’s water tank project will soon be completed. At the time of the site’s evaluation, it was estimated that the well would supply around 250 gallons per minute. It is now expected to produce 350-450 gallons. Mayor Greg Garner said the well may need to be reinforced due to the extra water pressure.

During the meeting, two items concerning construction came up. Shane Thain submitted a building permit for a new shed for the council to review. Chris Yancey’s request for a separate address for his mother-in-law was formally denied with the council citing the potential for future issues to arise from such a decision. Yancey acknowledged this and did not object. He did, however, state that he was planning to do some renovations on his house, such as adding a deck and greenhouse as well as expanding the roof. The council assured him that the changes he described would not require a building permit.

Pioneer day celebrations have been tentatively set for July 18. With COVID-19 still largely uncontrolled the council has reserved the final decision on the festivities until a later date, though they will be discussing it next month to further iron out any issues. The council was aware of the strain this last minute decision process would be putting on Weston’s event planner Jane Vahsholtz but are willing to help her however she needs.

Mayor Garner recently electronically attended a meeting hosted by Governor Brad Little with the city leaders around the state, at which the governor announced that the state is on track to enter stage two of reopening by May 16. Several non-essential businesses such as restaurants, gyms and other close contact services can open so long as they abide by certain specific guidelines. These guidelines can be seen at: https://rebound.idaho.gov/business-specific-protocols-for-opening/

Tickets to That Famous Preston Night Rodeo went on sale May 1.

“We are hoping that in three months, things will be much further along as far as settled down and life back to normal — whatever normal is. We will be socially responsible and do whatever it takes to have a rodeo,” said rodeo chairperson, Kris Beckstead. “I can’t even imagine a summer without a rodeo, and neither can a lot of people. We’re going to do our best. Everyone is excited, and hoping we can get that done.”

Preston
Twin Lakes Canal Co. reservoirs closed for public use til end of May
By NECIA P. SEAMONS Citizen editor

The board of the Twin Lakes Canal Company voted Friday, May 8, to keep their properties closed to the public until May 30. Twin Lakes, Condie and Winder reservoirs all belong to the company.

“The board made the decision that we’ll follow Gov. Little’s recommendation for Phase 3,” said the company’s president, Hank Povey. Boating, fishing, and camping will open May 30, a Saturday, he continued.

The decision came after much deliberation over the company’s responsibilities regarding the public.

“Its not local residents we are concerned about going in (to date, no verified cases of coronavirus have been identified in Franklin County),” said Povey. “It’s outside residents coming in and not respecting social distancing. If people would do that on their own, then it wouldn’t be a problem, but then there are those that have no respect for other people,” said Povey.

And the company doesn’t have the personnel, nor the budget for patrolling their properties to make sure social distancing is enforced.

Last weekend, a group of four campers was at Twin Lakes, camping. Povey assumed they all belonged to one family, but the idea that someone could contract COVID-19 while not observing social distancing on the company’s property concerns the board. The irrigation company does not want to be responsible for that, said Povey. “Instead of a revenue making deal, we will have to pay someone to patrol it,” he said.

The decision was also influenced by residents of the smaller communities surrounding the reservoirs.

Mary Penrod, owner of Clifton’s only convenience store, Papa Jay’s, said she has mixed feelings about the company’s decision.

“Of course we need the business, and Twin Lakes Canal Company helps us by opening up. But at the same, you have to be careful and look at the bigger picture. You have to think about the people in the town and keeping people safe.”

“I feel like my opinion changes every half hour depending on what I hear ... My opinion has to err on the safety of the people in the town,” said Penrod.

“We just barely got our SBA Payroll Protection Payment. That’s helped,” she said. On the other hand, the COVID-19 pandemic’s impact on meatpacking plants has severely disrupted her business. Penrod can’t purchase the meat she used to make jerky.

Instead of the seven boxes of meat she usually buys to make Papa J’s signature product, she has only been able to get ahold of one box. Panic purchasing left lots of empty meat shelves when the meat plants were shut down, she said. Now, the demand for meat has eclipsed the amount of meat that can be processed, and stores are not getting their shipments.

“Right now I have enough to do a batch,” she said. Penrod hopes that by the time she needs another batch made, she’ll have arrangements in place to obtain the meat she needs. She has partnered up with another company to be able to make a purchase large enough to do business with the Miller packing house in Hyrum.

In the meantime, instead of making jerky, her employees will be sprucing up the store.

“Because of that money I can give them other jobs. We’re are going to clean, paint and get organized. I can keep the people who work in the jerky busy,” she said.

Consolidated Irrigation Company is planning to open its reservoirs for boating on May 29, said company president, Lyle Porter.

“We normally start checking boats in on Memorial Day weekend, so this will just be a week later,” he said. He also noted that he was just talking about boaters. People are fishing off the bank of the company’s reservoirs, now. They are also camping there, as well, he said.