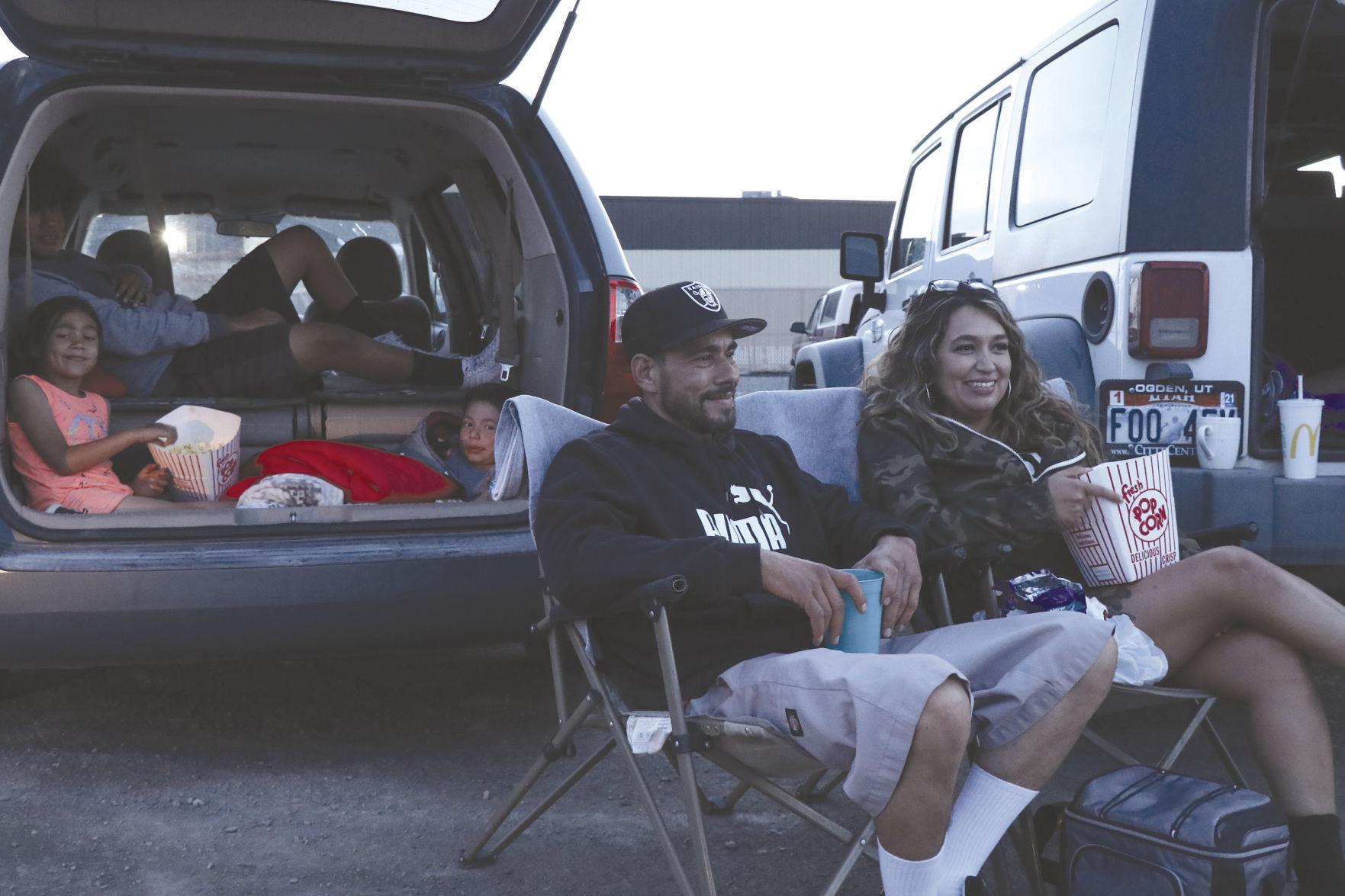 The Rosales family, of Tremonton, gets ready to watch a drive-in movie at the Box Elder County Fairgrounds on Saturday, May 9. Walker Cinemas of Perry provided popcorn for a more authentic movie-going experience. 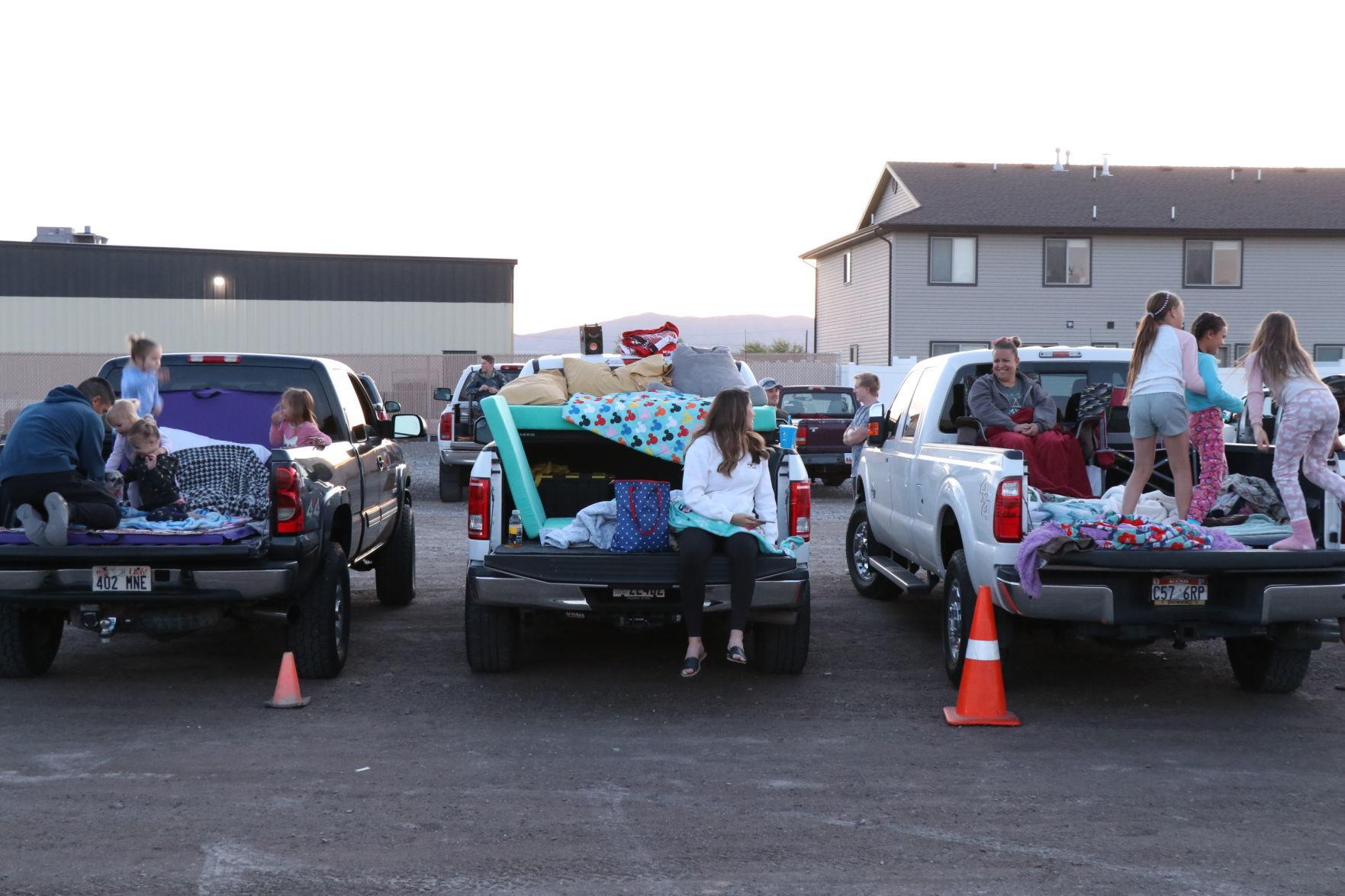 A drive-in movie event held Saturday, May 9 at the Box Elder County Fairgrounds in Tremonton provided an opportunity for people to socialize while maintaining distance.

A life-size bison sculpture entitled “Distant Thunder” was hoisted by crane and guided into place at its permanent home on Wednesday, May 6 at Golden Spike National Historical Park in Promontory. See more photos from last week’s ceremony at www.tremontonleader.com

Rios Pacheco, of the Northwestern Band of Shoshone, offers a prayer at a ceremony on Wednesday, May 6 dedicating a new bison sculpture at Golden Spike National Historical Park.

Naoma Tate, who commissioned the sculpture by Utah artist Michael Coleman, leans in to kiss it after it was installed in its permanent place.

A crane lowers a 6,000-pound, life-size bison sculpture into place at Golden Spike National Historical park in Promontory on Wednesday, May 6.

Various people who were instrumental in the project pose with the sculpture after it was installed.

National Park Service employees pose with the sculpture following its installation on May 6 at Golden Spike National Historical Park.

A wreath was placed on the sculpture after it was installed.

The traditional May 10 commemoration of the completion of the transcontinental railroad may have been derailed by the coronavirus, but that didn’t stop Golden Spike National Historical Park from holding a celebration last week to welcome its newest resident.

Park officials and benefactors joined local dignitaries last Wednesday, May 6 to witness the permanent installation of “Distant Thunder,” the name bestowed upon a life-size bronze sculpture of a bison that now greets visitors to the park in Promontory.

The 6,000-pound piece sat on a trailer while a series of speakers talked about what the sculpture represents, and heaped praise upon everyone involved in the cooperative effort to bring it to the park.

Rios Pacheco, of the Northwestern Band of Shoshone, offered a traditional Native American prayer before putting the significance of the moment in context. Pacheco said the buffalo represents strength and sustenance and the connection of all people to the Earth, and is therefore a fitting tribute to the various cultures from around the globe that came together to build the railroad.

“This buffalo represents all the people throughout the world,” he said. “We are a family here.”

Congressman Rob Bishop, who worked with the National Park Service and the Interior Department to secure a permanent home for the sculpture at the park, said it was a long process involving plenty of red tape.

Bishop was also instrumental in the movement that granted National Historical Park status to the Golden Spike site last year, and said the new addition represents a key step in an ongoing movement to further raise the park’s profile in the eyes of the general public.

“This is our newest national park, and the only one here in northern Utah,” he said, “but this is not the end of it. We are looking at this as the step that’s going to help make this a destination spot for people coming out here to learn something important about our history.”

“Distant Thunder” was created by Michael Coleman, a prominent Western artist based in Utah County. Philanthropist and art collector Naoma Tate commissioned Coleman to create the sculpture through her involvement with the Golden Spike Commission, which was originally created to put on last year’s 150th anniversary celebration at the park. The sculpture was paid for by the Hal and Naoma Tate Foundation, named after Tate and her late husband.

“I think he ended up creating a magnificent symbol for the strength it took to come west, and the strength that it took for the people to survive here,” Tate said of Coleman’s work.

Following last Wednesday’s ceremony, a large crane hoisted the sculpture and swung it into place with the guidance of many hands on the ground. It is now prominently displayed in its permanent home in front of the park’s visitor center.

The sculpture was finished in time for last year’s big celebration and made a brief appearance there, but was removed from the premises and stored until a permanent spot could be secured for it.

Doug Foxley, co-chair of the Golden Spike Commission, said last week’s event marked the culmination of a years-long effort that involved dozens of people, and a lot of hard work and patience.

“We finally got permission to display it here, and thank heavens, “Distant Thunder” has a home on the range,” Foxley said.

With the current state of events in the world, Foxley said the event takes on a dual meaning that was perhaps unintended, but timely nonetheless.

The Brigham City Temple is among 17 temples the Church of Jesus Christ of Latter-day Saints has reopened for marriage ceremonies. The church is planning a four-phase reopening of its 167 temples worldwide that were closed after the COVID-19 pandemic spread.

SALT LAKE CITY (AP) — The Church of Jesus Christ of Latter-day Saints has reopened 17 of its sacred temples for wedding ceremonies.

Church officials said in a news release that 17 temples in Utah, Idaho, Germany and Sweden reopened Monday, May 11 for marriage ceremonies only with a limited number of guests. The faith plans a four-phase reopening of its 167 temples worldwide that were closed after the COVID-19 pandemic spread.

Eleven of the temples that were reopened Monday are in Utah, including those in Brigham City, Logan and Ogden.

The announcement comes one day after Utah state officials said churches can begin holding services again as long as they adhere to social distancing guidelines.

Despite that, LDS worship services held on Sundays at churches will remain shuttered, church officials said. Temples are used only for sacred ordinances.