A large portion of Tremonton is well on its way to being officially declared a historic district.

A consultant hired by the city to survey and inventory homes and other buildings recently completed her work, and found that approximately two-thirds of the buildings in the older part of town have attributes that qualify them for historic status.

Based on the findings, the Tremonton City Council earlier this month officially applied to be included on the National Register of Historic Places. In addition to the publicity, sense of place and community pride it brings, the designation would also give owners of buildings within the district boundary the opportunity to receive tax credits to help pay for improvements to their properties.

Salt Lake City-based consultant Angie Abram of Storiagraph LLC found 470 buildings that had at least some historic qualities within an area bordered roughly by 800 North, 300 East, 700 South and 400 West.

Abram said that for an area to be awarded historic status, around 60% or more of the buildings need to found as “contributing.” City materials define a contributing building as “a structure that is 50 years or older and, due to its architectural integrity or other factors, contributes to the district’s historical significance or character.”

Abram said 67% of the Tremonton buildings she surveyed qualify as contributing, placing the district well above the typical threshold for receiving the designation.

The city recently mailed a notice to all property owners within the boundaries of the proposed historic district, inviting them to participate in an online presentation last week to learn more about the proposed district.

Of particular interest to building owners is a 30% tax credit on expenses related to certain types of property improvements. The program is voluntary and no one will be required to make changes or improvements to their properties, said Tremonton City Manager Shawn Warnke, who has participated in a similar program for his own home in Brigham City.

“There are no land-use restrictions associated with being listed on the National Register of Historic Places,” Warnke said. “My experience was that the tax credit program was a relatively simple process and financially beneficial.”

In a recorded presentation of her findings, Abram provided some historical context as to why the city is a good candidate to be included in the national register. She said Tremonton is one of only three cities or towns in Utah that was developed out of a successful water reclamation project (the others are Delta and Koosharem), and is unique as the only one of the three that was started by private developers.

Early settlers in the area struggled to find high-quality water sources, but a canal project on the Bear River in the late 19th century changed that. When the project was announced, real estate speculators snapped up most of the available land, and Tremonton went on to become the commercial hub of the Bear River Valley.

Abram said the first settlers in town came from New Sharon, Iowa and built homes around what is now Iowa String Road, but it was a group of German immigrants from Tremont, Illinois that founded the city in 1903, naming it after the town they left behind.

Notable characteristics of the district go back to the way the town was originally built, with 2.5-acre blocks, narrow, deep lots and narrow roads – “a nice, tight density,” Abram said. Victorian and Foursquare styles were common among the first-built homes.

The town’s population grew quickly, from around 100 at its founding to 500 within two years. Tremonton boasted 1,000 residents by 1925, and was growing beyond its early settlement and development period into what Abrams describes as an “agriculture, small business and community development period” with a “vibrant commercial core” that brought new commercial and community buildings, many of which still stand and contribute to the overall historic qualities of the district.

Many homes during this period were built in an international style that was “very unusual” at the time, she said.

Abram said a new period started in 1955, a postwar period in which Tremonton got a big economic boost from the opening of a rocket motor plant owned and operated by Thiokol Corp. (now Northrop Grumman). At a time when many other agricultural communities were struggling, she said Tremonton continued to thrive due largely to the Thiokol plant, which also helped usher the city into the modern era.

The economic, social and other forces that shaped Tremonton are reflected in the city’s buildings, which Abram said is really the essence of a historic district. 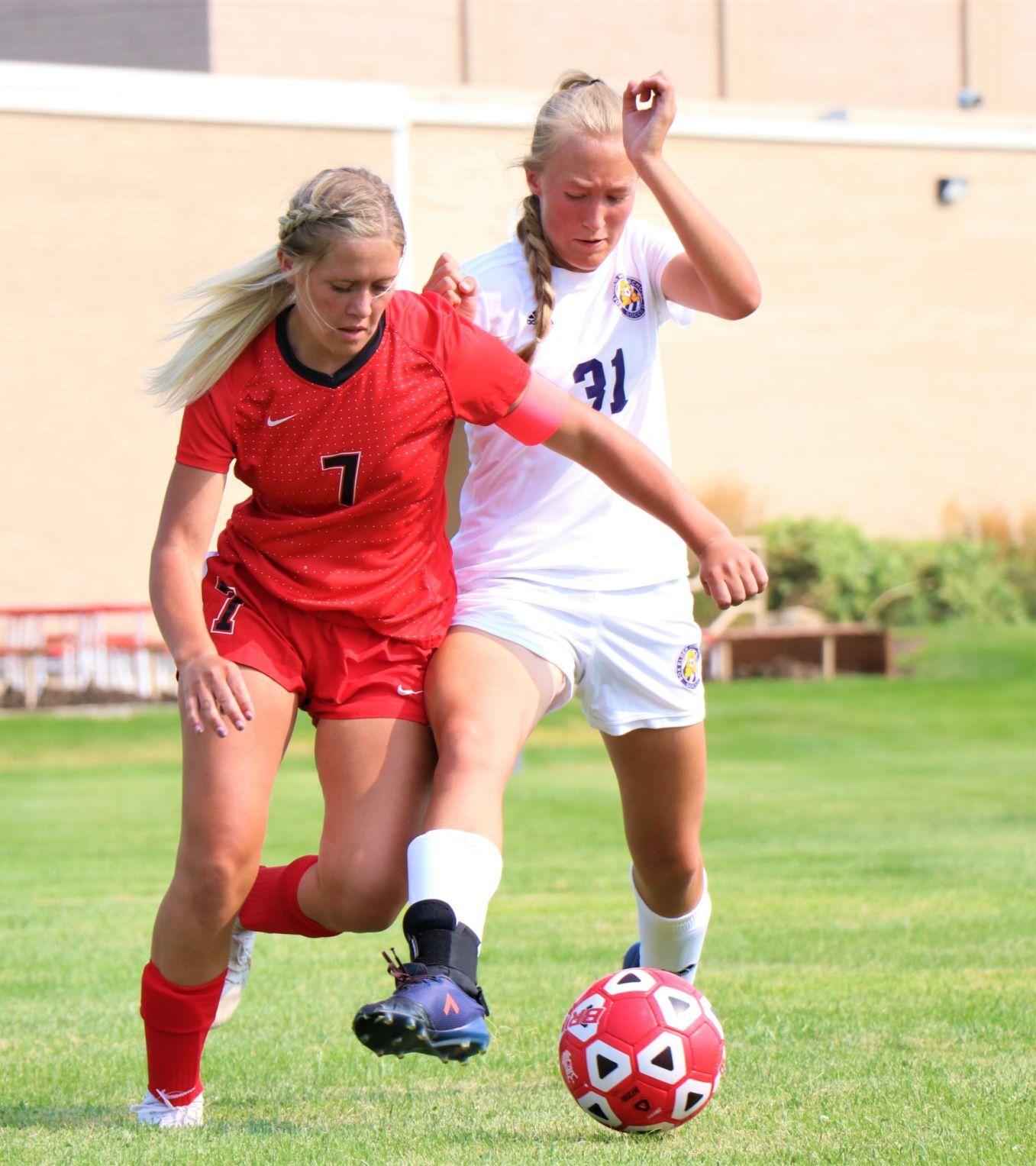 Last week was a busy one for local wildland firefighters, and if history is any guide, this week will keep them on their toes as well.

The Box Elder County Fire Department, assisted by other local, state and federal agencies, spent much of last week battling a fire that was started accidentally on Tuesday, Aug. 18 by human activity in the Hansel Valley. Crews had it under control on Friday after it had consumed about 600 acres, County Fire Marshal Corey Barton said.

A mostly dry lightning storm that came through the area on Thursday night had firefighters working through the night.

“It had our guys totally overloaded,” Barton said. “It was a rough night for everybody.”

The largest fire from that storm started on Wildcat Hill near Kelton and burned about 500 acres. A smaller blaze in remote territory on Red Butte in the Grouse Creek Mountains was kept to about 10 acres, but a lack of roads in the area made access difficult.

Another fire near Blue Creek, not far from the Pocatello Valley exit on I-84, was started by a downed power line. While it didn’t grow to a large size, Barton said the fire destroyed a combine, two tractors and a couple of structures worth an estimated $750,000.

Another small fire in the Dove Creek area burned an old, abandoned cabin, and another near Beaver Dam burned just “a couple of acres,” Barton said.

The skies over the Bear River Valley have been noticeably smoky in recent days, obscuring views of the mountains and impacting air quality.

Although several wildfires were burning in western Box Elder County, a combination of lightning- and human-caused blazes, the vast majority of the smoke has been coming from an epic outbreak of lightning-caused fires last week in California.

Jon Meyer, a meteorologist with the Utah Climate Center at Utah State University, noted the current air quality is rivaling that of bad wintertime inversion days but added, “The good news is that typically, daytime heating will help mix out some of the smoke choking the morning air, so conditions do tend to improve through the day but then again get worse overnight.”

Meyer said the relatively small fires in Box Elder County have added “near-surface smoke alongside the more impressive smoke plume coming in from the vast amount of California fires.”

Contributing to the smoky air, Barton said, is the fact that many farmers are busy burning stubble fields following recent harvests.

“We’ve been really busy issuing burn permits on top of all this,” he said.

An unusually hot, dry summer has aggravated the fire season across the West, though Northern Utah has been largely spared. Meyer cited several tied and broken daily temperature records for Logan in August, but said the summer overall has not been significantly hotter than in other years over the past two decades.

“It’s been the individual heat waves we’ve seen this summer that have pushed this year into unusual and miserable territory,” he said.

August opened with a heat wave that saw two days of record 103-degree temperatures on Aug. 1 and 2, plus one record-tying temperature of 100 degrees on Aug 3.

These were records for those calendar days, but the 103-degree reading at the Logan/Cache Airport weather station on Aug. 2 was also the second hottest temperature ever recorded there for any day — one degree shy of the all-time high of 104.

Temperatures have started to cool off, with a high of 93 degrees predicted for Wednesday in Tremonton, followed by highs in the 80s this weekend and down into the 70s by early next week.

Even with cooler weather on the way, Barton said dangerous fire conditions will persist until significant precipitation arrives. He said the week of the Box Elder County Fair is typically one of the busiest of the year for local firefighters.

Because of the hazard, open fires remain off limits in all unincorporated areas of the county, including on National Forest land, and the state has suspended target shooting on wildlife management areas statewide until further notice, including on the Brigham and Coldwater WMAs in Box Elder County.

“The conditions are extremely dry right now,” Barton said, adding that local firefighters, assisted by the state and federal agencies, have done a “great” job keeping things from getting out of control.

“The system in our county is working really well,” he said. “Our guys are getting the initial attack, and we’re getting some really great support.”

SALT LAKE CITY (AP) — Utah legislators unanimously voted during a special session last week in favor of a plan for the November election that includes outdoor voting and additional ballot drop boxes in rural parts of the state.

The bill would require counties to provide an in-person voting option this fall, which could include drive-through or walk-up voting, in addition to the state’s vote-by-mail system. Most of conservative Utah already votes by mail, in contrast with recent by-mail voting skepticism from Republican President Donald Trump.

“As we all know, everybody looks to the state of Utah when looking at mail-in voting,” Republican Sen. Wayne Harper said Thursday. “We do it right. This goes through and … recognizes what we do, but at the same time requires and allows for all people who want to vote in person the option to do that.”

In April, the state legislature voted to run the June 30 primary election entirely by mail and temporarily do away with traditional polling places.

Republican Rep. Stephen Handy, who is co-sponsoring the legislation, said he hopes these additional voting options will give the electorate more confidence in the process.

The bill would automatically repeal in January 2021 except for one section that classifies ballot harvesting, the practice of a person sending or dropping off ballots on another voter’s behalf, as a class A misdemeanor.

Handy said there haven’t been documented cases of ballot harvesting in Utah. But he hopes this bill will prevent it from happening in the future.