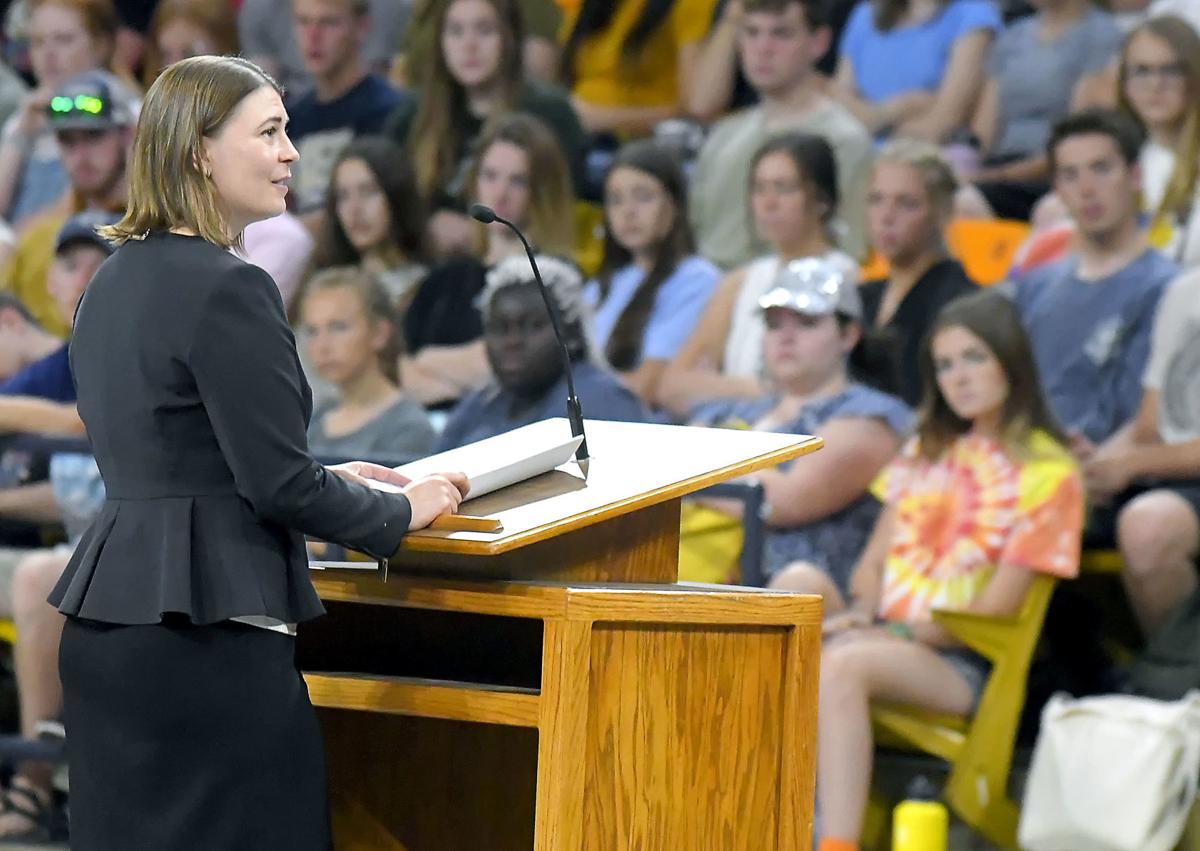 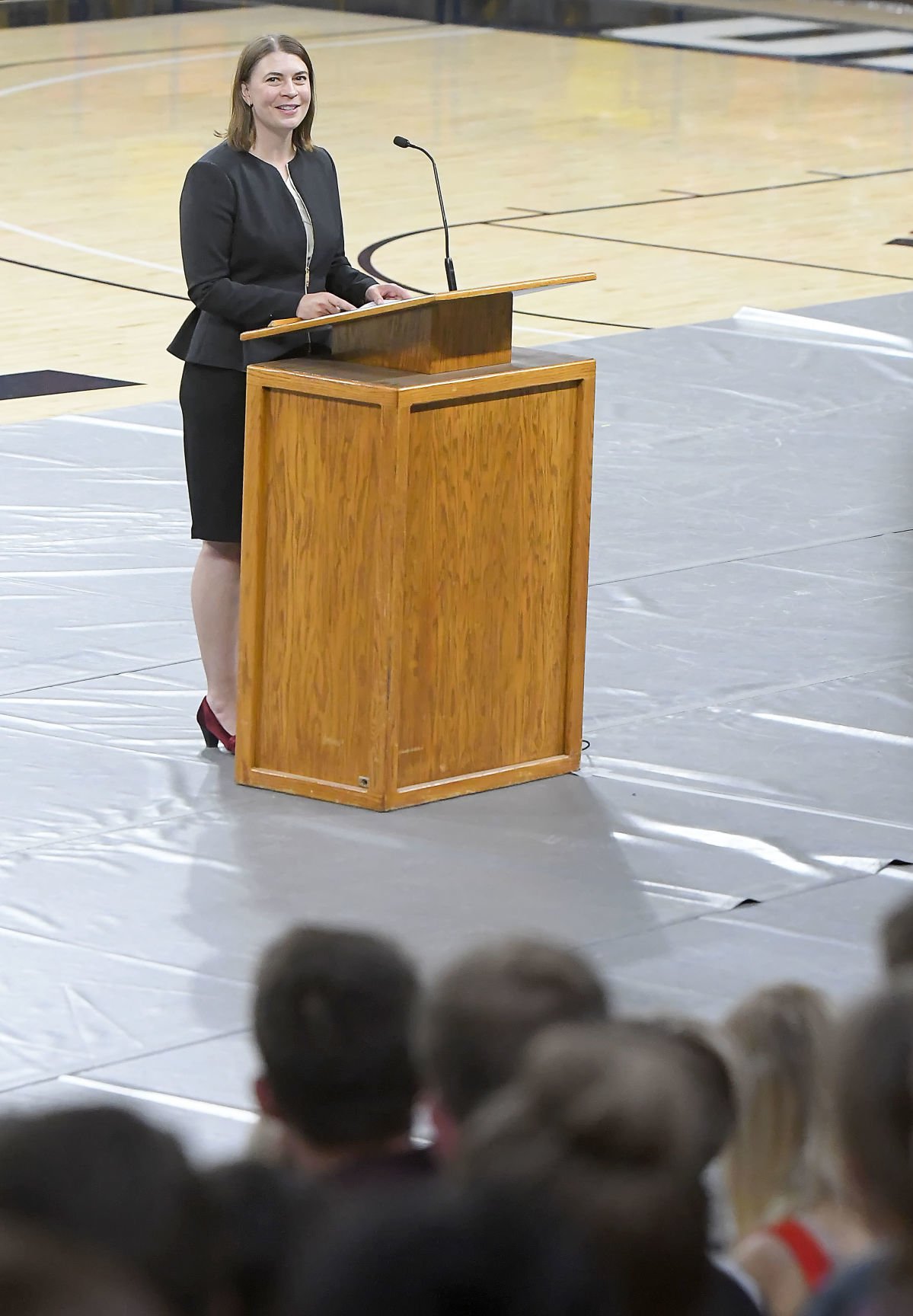 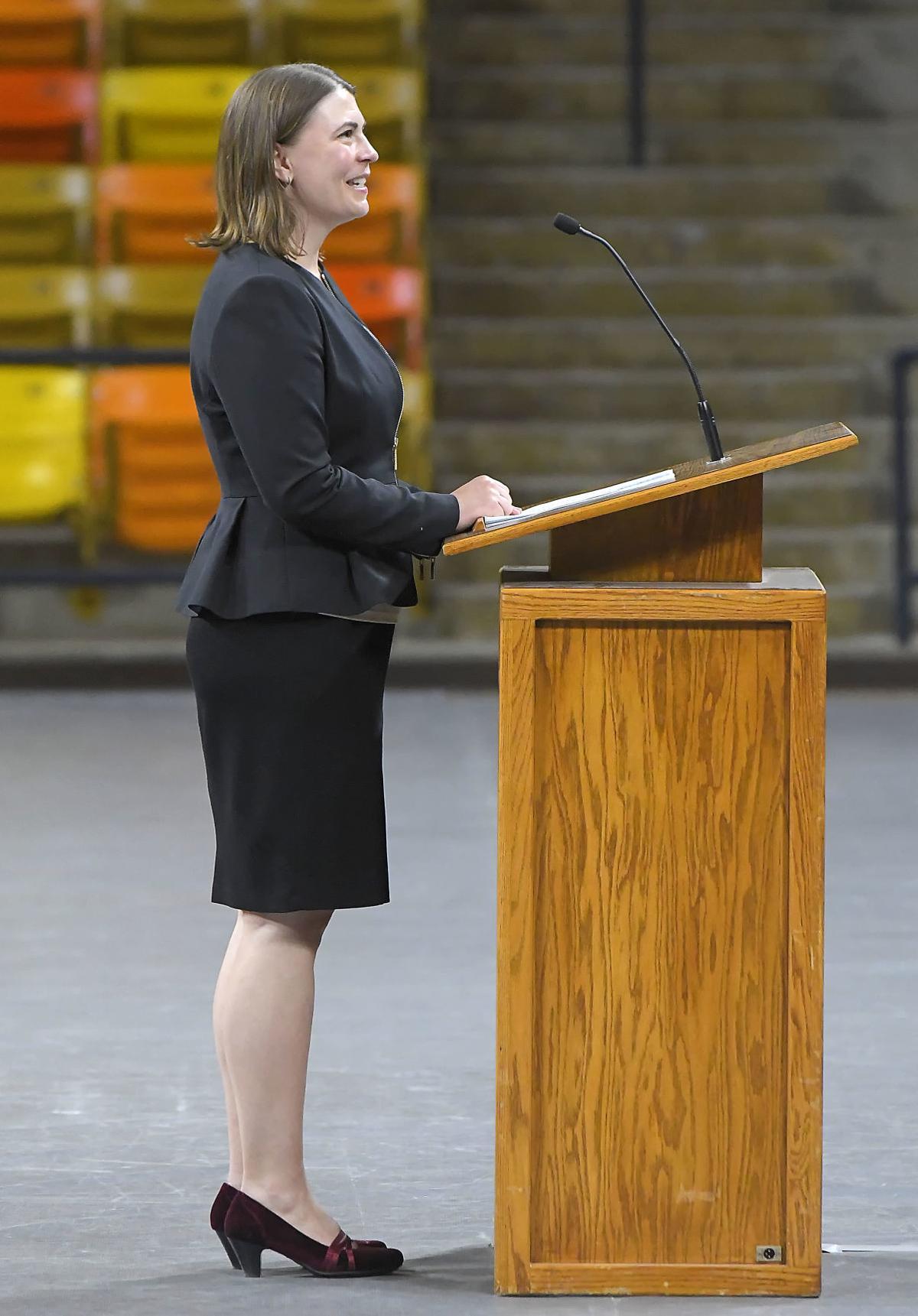 Even though the College of Eastern Utah — now USU Eastern — was quite close to her parents' home, Utah Supreme Court Justice Paige Petersen believes getting a higher education in Price was “the first step to so much growing and learning” in her adult and professional life.

The only woman currently on the state’s highest court made those comments during a keynote address as part of USU’s Common Literature Experience Convocation in the Dee Glen Smith Spectrum on Thursday morning, just days from the class of 2023’s first day of school on Aug. 26.

“This is your time,” Petersen told students at the outset of her speech. “You have a lot to look forward to.”

Her remarks came at the tail end of the annual Common Literature Experience, which calls upon incoming freshmen and the campus community to read the same book over the summer and discuss it during the fall semester. This year’s selected book was “My Beloved World” by U.S. Supreme Court Justice Sonia Sotomayor, released in 2013.

Petersen’s remarks to the freshman class covered her life story and ascent up the legal career ladder, which she said took her out of her comfort zone. She also shared what she learned along the way and how the current crop of USU students could apply the knowledge she gained in their own lives.

It was an address that, in many ways, tapped into themes of Sotomayor’s memoir, which chronicles her upbringing in the Bronx to her appointment in 2009 as the first Latina on the U.S. Supreme Court.

The two women have in fact crossed paths — when Petersen argued a case before Sotomayor when she was a judge in New York City.

“And it was pretty scary,” Petersen said. “It can be extremely intimidating having a judge fire questions at you.”

Sotomayor, in particular, was “intimidating,” the Utah Supreme Court justice felt at the time, because of the fact that the New York judge was so prepared and asked good questions.

But that experience was a crucial one in her legal career, Petersen said, because she learned so much from it.

Learning was a major theme in the Utah Supreme Court justice’s remarks on Thursday. Petersen likened an appetite for learning to a baby’s first steps or words.

Once young people, like the USU freshmen class, learn how to learn, “you’re capable of anything,” Petersen said — not just of the ability to memorize historical dates or the people who shaped history.

One step toward learning how to learn is getting out of your comfort zone, Petersen told students. That was true when she moved from a city with no shopping malls to Connecticut to attend Yale Law School.

“I was terrified of going there,” Petersen said. “I cried the entire flight.”

Sure, when she arrived she felt out of place with students who attended boarding schools or people she felt were not as nice as Utahns. But by Petersen’s senior year, she didn’t want her time in law school to end because she had made lifelong friends and learned so much.

“I understood things I didn’t even know when I got on that plane,” Petersen said, noting she also felt more “brave, confident and capable” as a law school graduate.

Two years out of law school, while clerking for an Ohio federal judge, unexpected happened — the terrorist attacks of Sept. 11, 2001. Petersen was interviewing for jobs at two law firms: one in New York, the other in San Francisco.

The day the attacks occurred she was in the latter city, but with all flights grounded, she could not get back home to Utah. So Petersen drove, and when she returned home, she still had a decision to make about which firm to work at.

“I was scared,” Petersen said. “I didn’t know if there would be more terrorist attacks.”

Her father told her not to make decisions based on fear, which Petersen saw as “giving me the courage to make a choice.” So she chose the firm in New York.

“You have to get out of your comfort zone, even if just for a while,” Petersen said.

The Utah Supreme Court justice also told students it’s okay to not be successful in parts of life.

“It’s free to give yourself permission to struggle or fail,” she said. “(It) can be hard and painful …. But it’s the best way to learn.”

“Remember, when you feel a struggle, that is you growing,” Petersen added. “So give yourself a pat on the back.”

Petersen also told students she hopes they can learn from one another, and to do that, they must listen.

“You’ve have a chance to talk. But first, listen,” she said.

That skillset is certainly key to being a justice on the 5-member Utah Supreme Court, Petersen explained.

“Listening and understanding is probably the most important part of my job,” she said.

“We have to clear it up and set precedent for other cases,” she said, “and in order to do that, we have to listen.”

Petersen and other justices' listening skills were on full display in the spring of 2018, when the Utah Supreme Court heard two cases at USU — a first for any institution of higher learning in the state.

“Sometimes, I can’t believe that’s my job,” Petersen said on being a justice. “I absolutely love doing it.”

Just as she loves her job, the Utah Supreme Court justice said she hopes students make the most of their time at USU.

“I hope you learn how to learn,” Petersen said, “because if you do, you’ll set yourself up for a lifetime of growth.”

As for Petersen’s speech, Day said she was impressed particularly by the fact that the Utah Supreme Court justice did not see her gender as a barrier in the legal world.

“She didn’t see gender as an obstacle. She just pursued her dreams,” Day said.

Day wants to now channel her energy as a USU student in helping others. In fact, Petersen called on Day and her freshmen class to do something that gives them a sense of purpose.

Hernandez told students gathered in the Spectrum about her “humble upbringing” as the daughter of Mexican immigrants — a story she said is similar to Sotomayor’s, who is of Puerto Rican descent and was a first-generation college student.

Hernández said she was scared to start classes at USU when she began in 2015, but she learned to overcome that feeling. She gave the students a bit of advice: “Be brave, raise your hand, ask questions.”

“It is scary, but if you take that bit of courage with you, you can do anything,” Hernández said.

She told The Herald Journal in an email after Petersen's speech she particularly appreciated the justice's message about failing and learning from those experiences.

"I realized that I’m scared because I don’t want to be wrong. I’m scared of making mistakes and failing, but she reminded me that it’s okay and nearly all successful people will fail because they’re being brave and making big moves," Hernández said. "I returned to work this morning feeling more confident about decision-making."