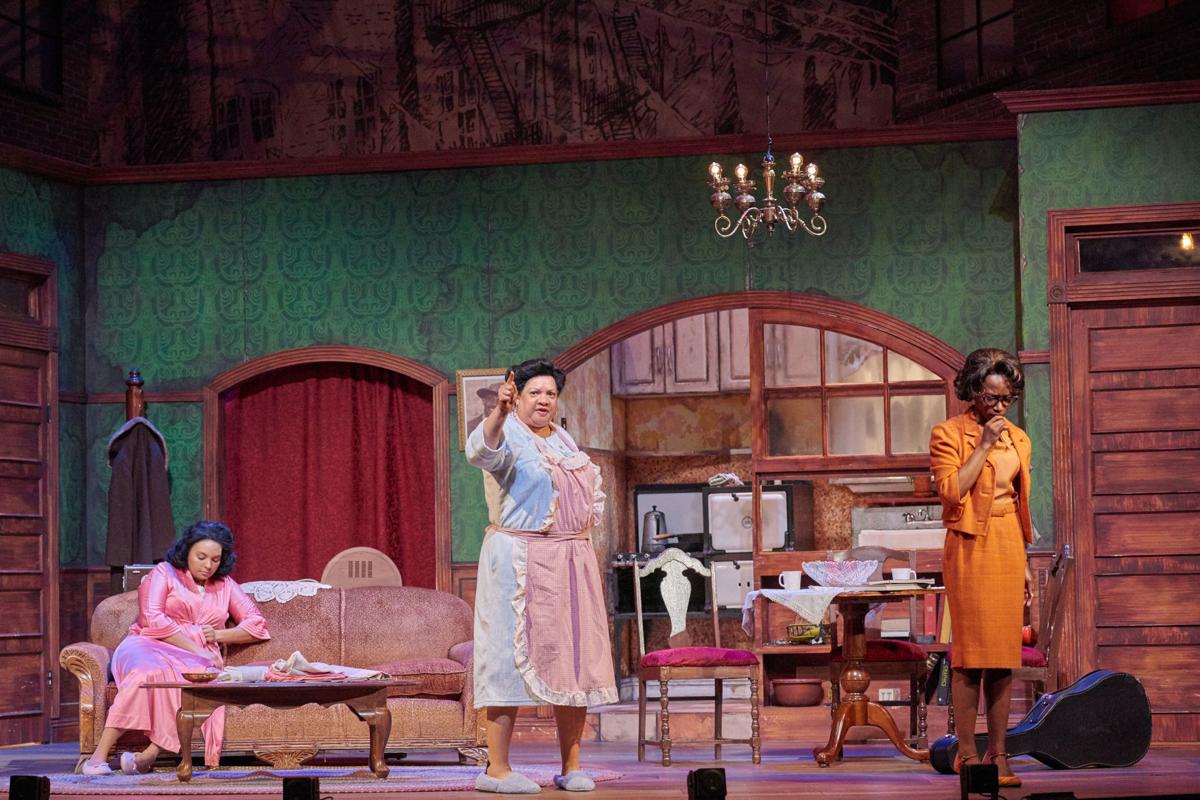 The women of the Younger household react differently to news of a financial crisis in “A Raisin in the Sun.” They are :Ruth (left, played by Alaina Dunn); Mama Lena (center, played by Kim Bey); and Beneatha (right, played by Amanda Morris).

The women of the Younger household react differently to news of a financial crisis in “A Raisin in the Sun.” They are :Ruth (left, played by Alaina Dunn); Mama Lena (center, played by Kim Bey); and Beneatha (right, played by Amanda Morris).

Any good theater production can make you laugh or cry. But only a truly great show has the power to frighten you.

The scary thing about the Lyric Repertory Company’s ongoing production of “A Raisin in the Sun” is the realization that this drama is as relevant in our supposedly post-racial 21st century as it was when Lorraine Hansberry penned the script 60 years ago. The topics may have changed when we discuss race and family relations nowadays, but the issues have not.

Director Eric Ruffin delivers a tense story of an African-American family coping with challenges in the late 1950s that are rooted in issues of poverty, trust and gender as well as race and discrimination. Ruffin has assembled an extraordinary cast of newcomers to the Lyric stage, many of them hailing from Howard University in Washington, D.C. Then Ruffin fine-tuned them like a priceless violin until there isn’t a false note in the entire production.”

Jeremy Keith Hunter is riveting as Walter Lee, a young husband and father struggling to escape his late father’s larger-than-life shadow while seeking his own identify in matriarchal household. His agonizing indecision about whether to sacrifice his pride and manhood for financial security is both heartfelt and utterly convincing.

The amazing Amanda Morris makes an equally memorable local debut as Walter Lee’s sister, Beneatha. In an average production, Morris would have stolen the show; even surrounded by talented co-stars, she nearly does so here. Morris can transition from being hilariously funny to deadly earnest in a New York minute; you can’t take your eyes off her.

The same could be said for Kim Bey and Alaina Dunn, two powerhouse actresses portraying Walter Lee’s mother and wife, respectively. Both of these women are simply marvelous in their roles.

Isaiah Reed and Jaylen Scott Wilson round out the principal cast members as two of Beneatha’s suitors, who espouse very different visions of the future for African-Americans.

The common denominators that make all of these performers exceptional in their roles is their obvious commitment to the play’s theme of humanizing race relations issues and their courageous willingness to display both strength and weakness in their characterizations.

Evening performances of “A Raisin in the Sun” will be presented on July 10, 13 and 26. Matinees are slated for July 20 and Aug. 3. For ticket information, visit lyricrep.usu.edu.

Charlie Schill has directed and performed with theater groups in the United States and overseas. Schill also served as theater critic for The Temple Daily Telegram in Temple, Texas, and Pacific Stars & Stripes and The Japan Times, both daily newspapers in Tokyo, Japan.