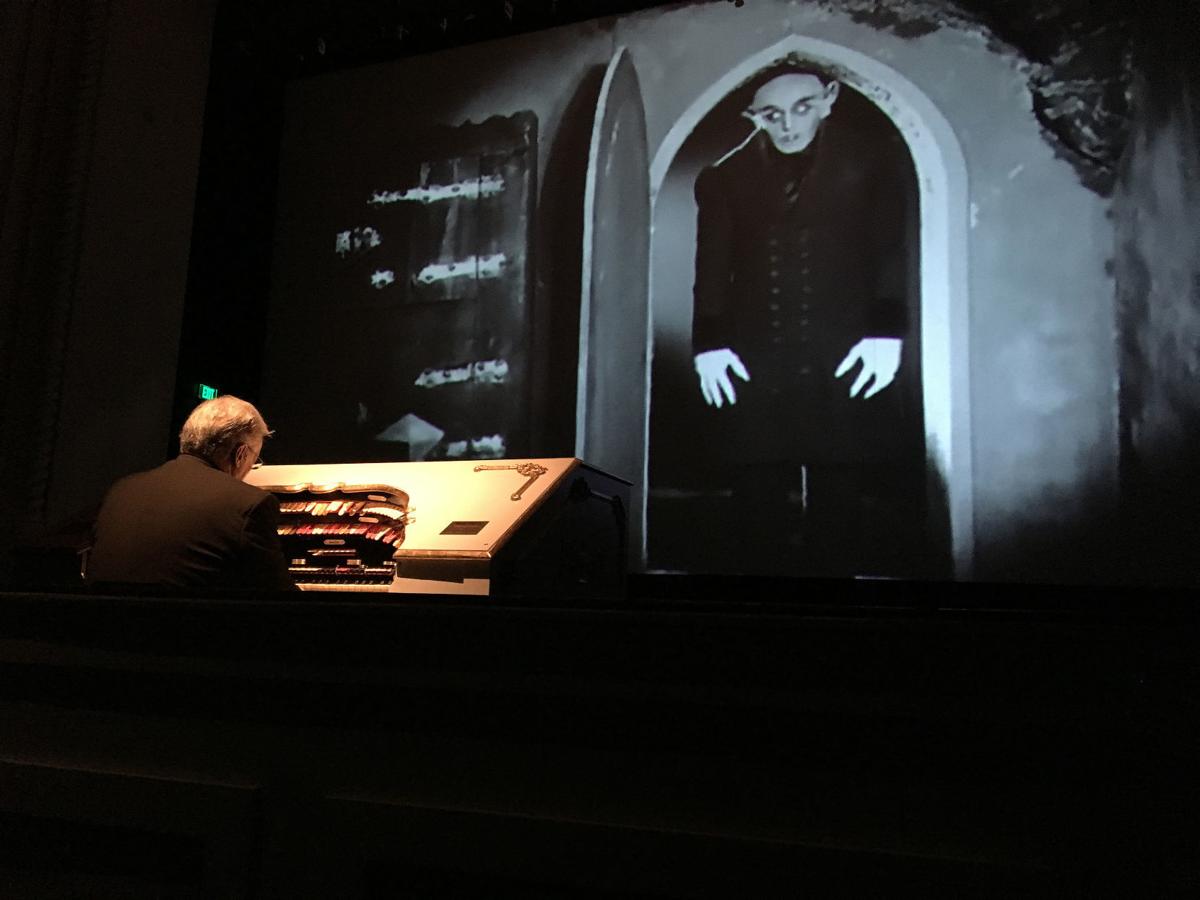 In a scene from the 1922 silent film “Nosferatu,” Count Orlok appears on the screen of the Utah Theatre in downtown Logan while Utah-based musician Mike Ohman, bottom left, provides music on the Wurlitzer organ. 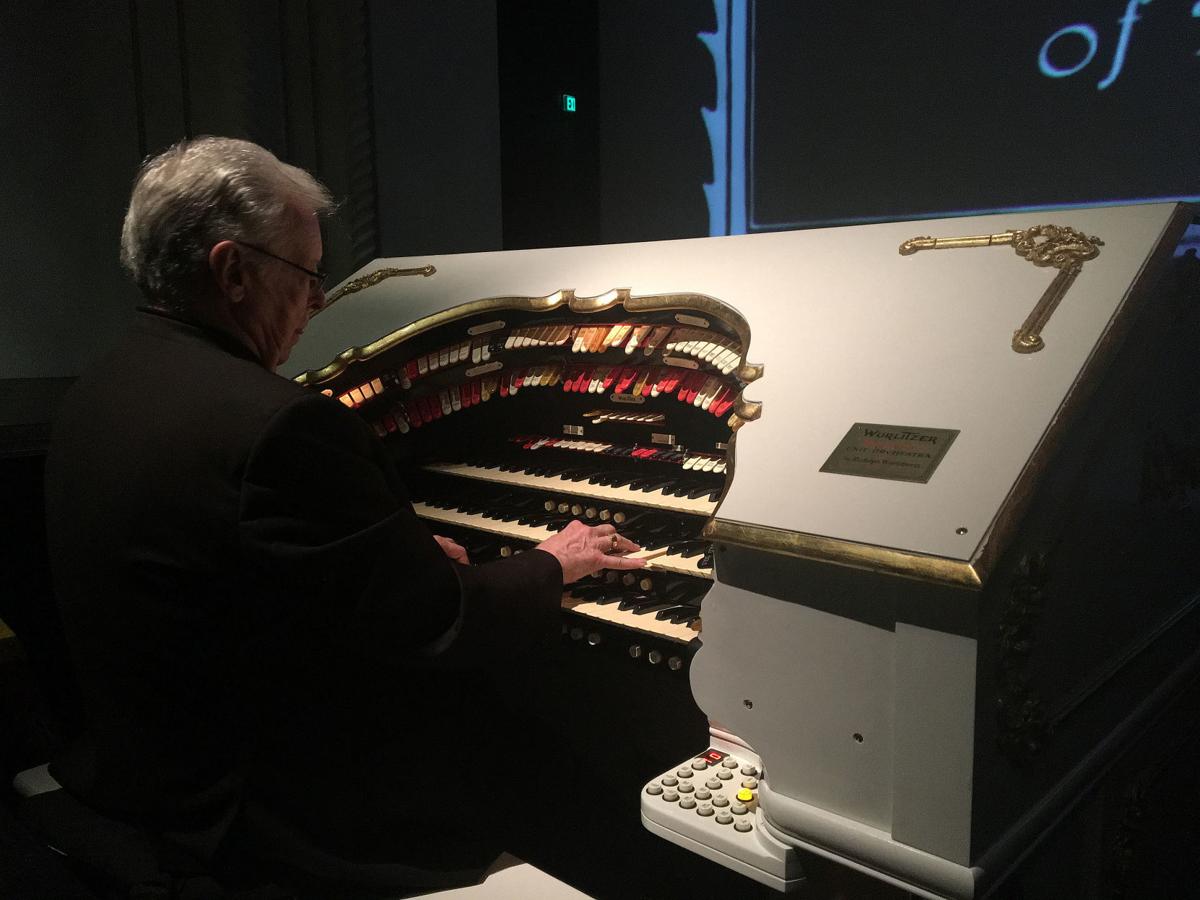 Ohman played the Wurlitzer organ non-stop during the 90-minute screening of the silent film.

In a scene from the 1922 silent film “Nosferatu,” Count Orlok appears on the screen of the Utah Theatre in downtown Logan while Utah-based musician Mike Ohman, bottom left, provides music on the Wurlitzer organ.

Ohman played the Wurlitzer organ non-stop during the 90-minute screening of the silent film.

If a ghoulish-looking being named Count Orlok believes you have a “lovely neck,” you might be in trouble.

That’s because this creature is a vampire with horrendous teeth, pointy ears and a gargantuan nose, who, by night, “digs his big claws” deep into his victims and “suckles himself on the hellish elixir of their blood.”

Sure, “Nosferatu” probably gave folks watching the movie at The Utah Theatre last Monday the creeps — but not for how the Count sounded. The 1922 movie was just one of several silent films screened this month at the renovated theater thanks to Utah Festival Opera and Musical Theatre.

Perhaps what made “Nosferatu” so eerie was the organ music of Utah-based musician Mike Ohman, who played the Utah Theatre’s Mighty Wurlitzer nonstop during the 90-minute film.

In putting music to a silent film, Ohman said he wanted the audience to experience the organ’s capabilities and also be entertained.

Michael Ballam, UFOMT’s founder, said he wants people to get the same kick out of watching a silent film that he did growing up in Cache Valley seeing an organist accompany one at the former Capital Theatre.

“I remembered, as a little boy, what that sounded like … because there’s nothing like it,” Ballam said. “When people sit here and experience it for the first time — especially young people — ‘Holy Toledo! Imagine, I didn’t know that existed!’”

Count Orlok is portrayed by Max Schreck, known for playing villainous characters during his career (the actor was later portrayed by actor Willem Defoe in the 2000 film “Shadow of a Vampire.”)

The 1922 legendary silent film is about an estate agent named Hutter who travels to Transylvania and sells a home to the Count, soon realizing the odd-looking man is a vampire out to terrorize the community of Wisborg as well as his wife, Ellen.

“Is Murnau’s ‘Nosferatu’ scary in the modern sense? Not for me,” Ebert wrote. “It knows none of the later tricks of the trade, like sudden threats that pop in from the side of the screen. But ‘Nosferatu’ remains effective: It doesn’t scare us, but it haunts us.”

Ohman said he has watched “Nosferatu” over 30 times.

“It’s an excellent film and every time I watch it, I watch for different things,’” he said. “When you read a book the first time, there’s a lot of detail you sometimes don’t remember or miss. Reading again gives you a memory or clarifies things. Same thing with watching this movie.”

One theater patron, Utah State University student Tanner Benson, told The Herald Journal he came to see “Nosferatu” because it ties in to his study of film.

“I love ‘Nosferatu’!” he said, noting it is believed to be the first film ever with a vampire in it.

“It did not disappoint,” Benson said.

SILENT FILMS AND THE MIGHTY WURLITZER

Gary Griffin, managing director of the UFOMT, said the Wurlitzer organ pipes and console were installed in the Utah Theatre with the intent to use them during silent films.

“Back in the ‘20s, every single movie house in the world had one of these organs,” he said. “Silent movies were never silent; they were always accompanied by music.”

But in 1927, with the release of “The Jazz Singer,” which included sound for its musical numbers, the silent movie era largely came to an end, according to Griffin.

Though it’s been almost a century since the release of that film, Griffin said it’s important for people of a new generation to know and appreciate silent films.

“People need to see where we came from,” he said. “How do you go from a film that you can’t even hear them speak to what we have today? It’s just remembering the past and revering it.”

Ohman, who lives in Spanish Fork, is performing at the Utah Theatre every Monday this month, when the silent films are shown.

The former owner of a restaurant called Pipes and Pizza was an organist and instructor at Brigham Young University for years before he retired.

Now Ohman devotes all of his time to restoring organs for various organizations, including The Church of Jesus Christ of Latter-day Saints.

“But my passion is old Wurlitzers,” he said.

The Mighty Wurlitzer, like “Nosferatu,” also has German roots. It’s more than a century old and thrived in the era of silent films. Today, it is extremely rare, with only about 200 left in the world, according to Ohman. In Utah, it’s estimated there are only four.

The sound of the Wurlitzer is created by 2,500 pipes, which puts it in the mid-range of size for all organs, Ohman said.

There are 61 keys across three keyboards; 18 ranks, or voices that imitate different instruments; and 32 bass pedals.

The instrument was called by the Wurlitzer company a “unit orchestra,” meaning one person is playing to create a sound that would emulate a full orchestra.

“I use every bit of it — but not all at once,” Ohman said. In silent films, “there’s no giving of any information to the organist. It is: look at the screen, determine what music would underscore the mood and then create that mood.”

That approach was certainly true during the few times Count Orlok appeared in the film. When he was near, Ohman would create a haunting melody that seemed to build and build until the vampire appeared on screen.

Asked what kind of enjoyment he gets out of playing the Wurlitzer during a silent film, Ohman jokingly said, “I hate it!”

In all seriousness, though, the longtime organ player and repairman said the audience is what helps him perform the way he does.

“The audience is what feeds me,” Ohman. “The reaction of the audience helps you to give more.”