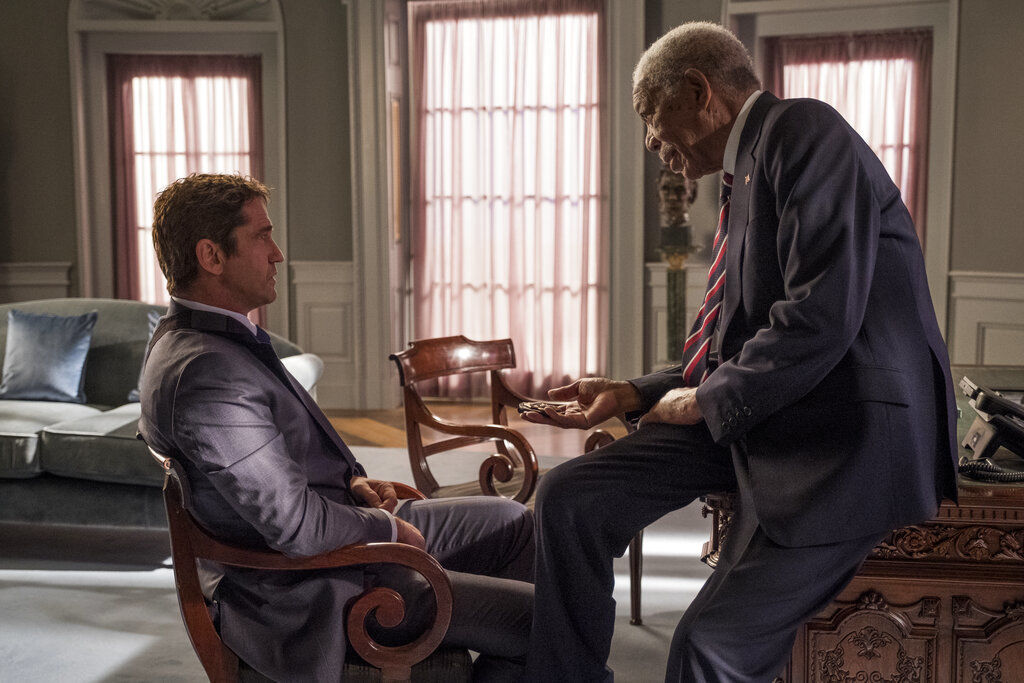 The “Has Fallen” series (I can’t believe I just typed those series of words) is now a trilogy. First Olympus fell, then London, and now an angel. They’ve all been quite mediocre action outings and “Angel Has Fallen” is no different.

The terrorists just won’t stop trying to kill President Trumbull (Morgan Freeman), but at least he has Agent Mike Banning (Gerard Butler) to protect him.

This time the assassins come at Trumbull with an army of explosive drones that divebomb him and his security detail while on a fishing trip. Trumbull ends up in a coma and Banning is the only agent to survive the assassination attempt. This, plus the addition of conveniently placed forensic evidence, leads the FBI to assume Banning was behind the attack.

At one point in the movie, after Banning has been disgraced and finds himself in handcuffs heading to a secured facility, a TV news station in the background mutters “President Trumbull lost his guardian angel today, as Mike Banning has been accused of masterminding the attack.” Thank you, movie, for explaining the title to me, lest I was too dumb to understand it.

Anyway, back to it. Banning doesn’t spend long in custody and ends up on the run trying to clear his name.

It’s all very standard wrong-man-accused stuff. We know what will happen it’s just a matter of getting there. When the movie is almost two hours long, the “getting there” is quite a chore.

“Angel Has Fallen” has lots of action, none of it comprehensible. This could end up as one of the worst edited movies of the entire year. Action scenes have zero awareness of space, geography or physics. It’s a blender filled with random images of Banning kicking, punching and shooting bad guys.

Speaking of the bad guys, what a bunch of dolts — at least the villains in a show like “24” had actual plans. Here, the bad guys are barely competent and never seem to understand exactly what it is they’re doing. Their ranks are seemingly endless as they charge head first into the Banning bloodbath that awaits. It’s all so silly and lacks any sort of excitement.

There is, however, a bright spot in this dim, dull movie. Nick Nolte gives a fantastic performance as Mike’s dad, which made me wish for a movie that was just about him. In the few minutes he’s given, he does more genuine acting than Butler has done through all three of these movies. Nolte’s performance paints a picture of a deeply troubled, but sympathetic man. We don’t spend much time with him, sadly. He’s a multi-layered character, though — one I wish we got to know more of. He’s an unexpected treat in an otherwise uninteresting movie.