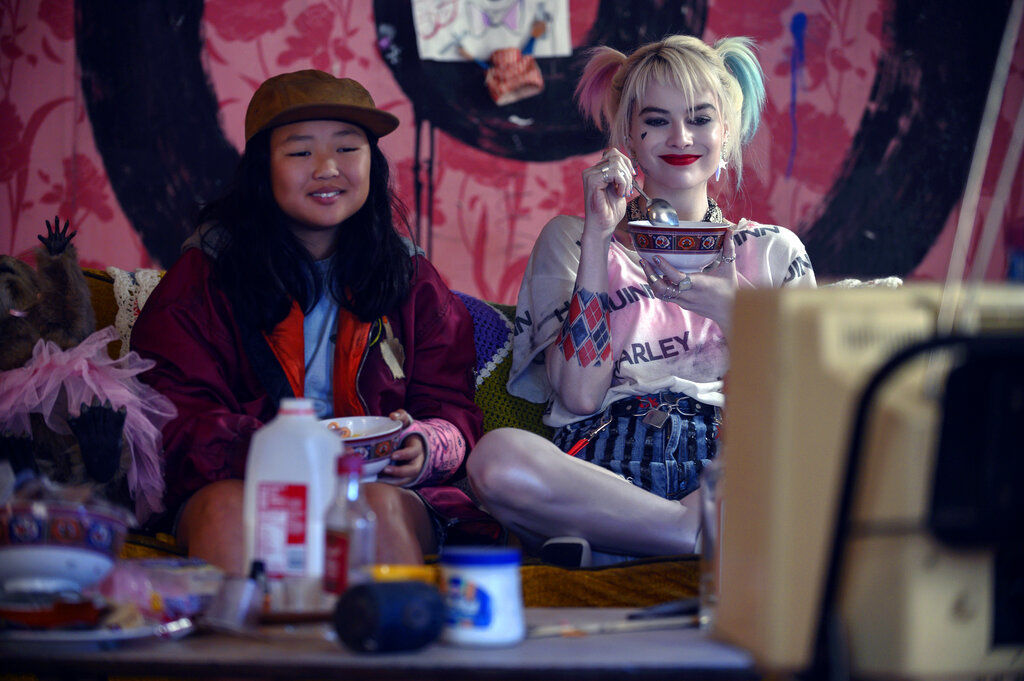 This image released by Warner Bros. Pictures shows Ella Jay Basco, left, and Margot Robbie in a scene from “Birds of Prey.”

This image released by Warner Bros. Pictures shows Ella Jay Basco, left, and Margot Robbie in a scene from “Birds of Prey.”

“Birds of Prey” is much better than “Suicide Squad,” but that’s a low bar indeed. At least it’s a bit more upbeat about Gotham and the miscreants that populate it. There’s a sense of humor here that’s sorely missing in other DC fare. It’s when it tries too hard for adorable dementedness that it goes off the rails.

Harley Quinn (Margot Robbie) is out on her own after breaking up with the Joker. It’s hard to jump into “Birds of Prey” with an open mind when you know that it’s a direct sequel from “Suicide Squad” and even the mere image of Jared Leto’s abomination in your imagination might be enough to ruin the movie altogether. It’s telling that the movie goes to great lengths to show “Suicide Squad” flashbacks without showing Leto’s Joker, though. Definitely a plus.

Quinn constantly mugs for the camera, breaking the fourth wall, telling us what’s going on. Not as much as Deadpool, but enough that we know this movie is going for a don’t-take-us-too-seriously vibe.

There’s a whole big plot about a gangster (it’s always a gangster in Gotham) and a diamond he wants, a murdered gangster family (more gangsters) and a whole bunch of mercenaries that want to kill Quinn because now she doesn’t have the Joker’s protection. It’s all needlessly convoluted as Quinn’s voiceover narrates the story to death. The movie makes the mistake of thinking the plot is interesting, when in reality it’s the characters and the action set pieces they find themselves in that gives the movie life.

I suppose the main bad guy Roman Sionis (Ewan McGregor) is fun to watch. He’s got a great scene where he talks about all the macabre art adorning his home. Funny stuff.

Sadly, after Harley assembles her team of kick-butt Gotham women, we’ve already gone through most the movie. Huntress (Mary Elizabeth Winstead) is unfortunately cut out of most the movie because, again, the plot must be explained for whatever reason. But she’s one of the best characters, so it’s sad that she takes a back seat.

Robbie is having a ball reprising her role as Quinn, and it is nice to see what director Cathy Yan comes up with in terms of action scenes.

One scene, where Harley hands Black Canary (Jurnee Smollett-Bell) a hair tie so she can fight without her hair getting in her face, had women in the audience roaring. It’s a far cry from David Ayer’s dreadful “Suicide Squad” where Harley Quinn was basically relegated to walking around in leather underwear the whole movie.

Most of the action scenes are really well put together using geography and setting as a tangible asset. The action isn’t ruined by too many cuts or close shots of fast moving body parts. Yan’s camera pulls back and takes in full action scenes, full of multiple moving parts, reminiscent of a movie like “The Raid.”

There’s quite a bit of fun to be had here if you can sit through the interminable plot explanation and the forced gleeful insanity.