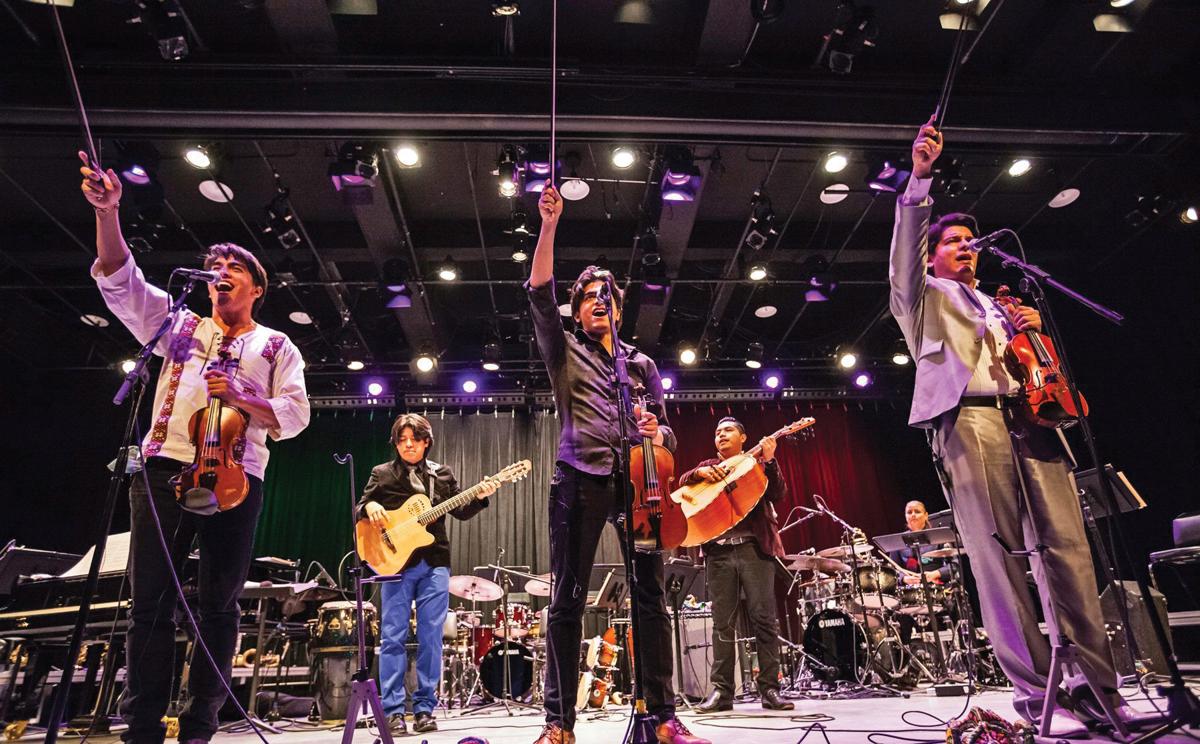 Live performances of the Villalobos Brothers combine virtuoso classical and Mexican folk music with stories and discussion about the Mexican-American experience. 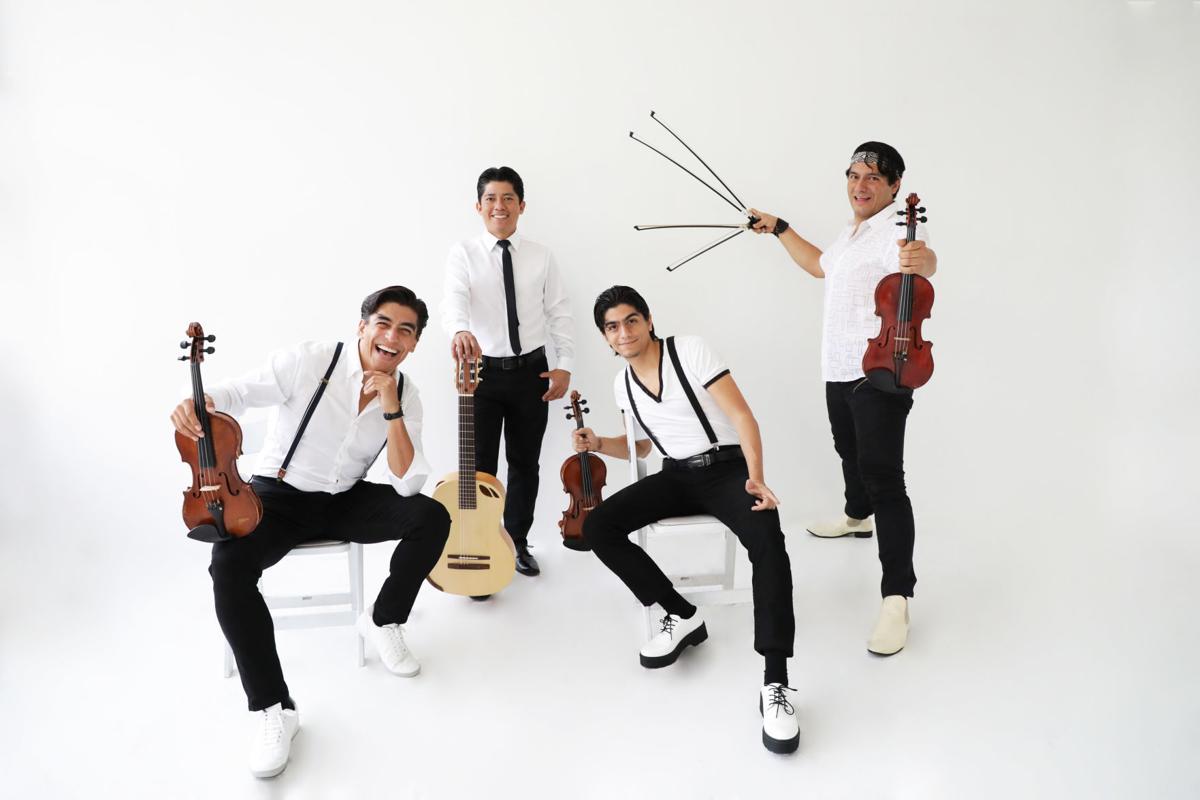 The Villalobos Brothers, shown here in a publicity photo with guitarist bandmate Humberto Flores, will perform at Logan’s Eccles Theatre on Nov. 11.

Live performances of the Villalobos Brothers combine virtuoso classical and Mexican folk music with stories and discussion about the Mexican-American experience.

The Villalobos Brothers, shown here in a publicity photo with guitarist bandmate Humberto Flores, will perform at Logan’s Eccles Theatre on Nov. 11.

The Villalobos Brothers, a band founded by three native Mexican brothers and professional violin virtuosos, have been addressing the conflicts between their homeland and the U.S. in a very unusual way. By blending the sounds of their classical training and the folk music they were raised around, they hope to bridge the gap and aid understanding between the culture of their nativity and the country in which they now live. On Nov. 11, the Villalobos Brothers bring their unique music to the Ellen Eccles Theater at 7:30 p.m.

“We talk about our songs in our concerts and the feelings and motivations behind them,” Alberto Villalobos said in a recent interview while on the road for the group’s current concert tour. “For instance, we talk about the students who disappeared in Mexico that have been missing for four years. We have songs that speak about police brutality in Mexico. We have a song about the reality of a migrant who come here and leaves behind a family. But we also have songs about lighter subjects and music that is just played for melody.”

Last year, the Villalobos Brothers were invited to help record a documentary movie and album at the annual Fandango at the Wall Event held at the Tijuana/San Diego border. Since 2008, Fandango at the Wall has brought musicians together from both sides of the border for a Son Jarocho jam session (Mexican music native to Veracruz).

“It was really a beautiful event,” Arturo Villalobos said. “The idea behind the project is to bring two sister nations together. They shouldn’t be divided by a wall. They should be united by music.”

The three brothers, Ernesto, Arturo, and Luis, were all raised in Veracruz, where they were exposed to many different types of Mexican folk music by their grandmother. Though their parents were not musical, their mother recognized their talent early on.

All three men also went on to earn their master of violin performance degrees from prestigious schools around the world. Ernesto was awarded a Fulbright Grant to study at the Manhattan School of Music. Alberto studied at the Royal Conservatory of Brussels and later at the Lucerne Festival Academy in Switzerland. Luis studied at the Mozarteum University of Salzburg and is continuing his education in Valencia, Spain, where he attends Berklee College studying music production. He hopes to produce their next album.

Among their many performances, the Villalobos Brothers have performed at Carnegie Hall twice, the Latin Grammy Awards, the Apollo Theater, the 60th Anniversary of the United Nations, and last year they collaborated and performed with the San Francisco Symphony on their own compositions.

“It was a massive undertaking,” Alberto said. “It took three years to put together the symphonic arrangements. The people who were in charge of the Day of the Dead Festival there invited us to debut those pieces with the orchestra.”

Though all three men are classically-trained in the Western European tradition, Alberto admitted that they felt isolated from the culture in which they had learned to love music.

“For me, my time in Europe was great for that academic side of music,” Alberto said. “But at the same time, I felt trapped. There were not many people in music who I could look up to and were like me. The classical world is a very tiny circle. They are mostly young and European and white. It’s hard to break into that circle. I love the music of composers such as Beethoven from the European cultures, but in some ways it was hard for me to connect with them. And for me, performing the same pieces of these composers over and over just didn’t make sense. So I decided to start writing my own music.”

The brothers found that when they would get together in Mexico for “jam sessions,” they were not writing classical music. Instead, they were writing music that blended music traditions of their homeland with the training they received from the Western world. In 2005, they founded the Brothers Villalobos and started performing the pioneering music they wrote and loved.

Humberto Flores, their guitarist, joined the Villalobos Brothers band as well and also serves as their artistic director. Flores was a childhood friend and studied with Luis at the University of Veracruz. He went on to earn his master’s degree in classical guitar from Giuseppe Verdi Conservatory in Milan, Italy.

“We could have all gone on to do classical performance,” Alberto said. “I had friends who invited me to be a part of different orchestras in Brussels, but I didn’t feel that was the right path for me if I wanted to express myself fully. I don’t regret it. It hasn’t been easy, but we’ve found a way to not just repeat ourselves or what somebody else has to say. We are actually creating something.”

“That is also something we talk about in our music — how difficult and costly it is to gain citizenship here,” Alberto said. “It’s been kind of a nightmare to lead that dual life. You have to exit the country every so often to spend time in Mexico and then come back and go through all the endless forms and fees. It’s a not an easy path.”

Alberto says they hope their music entertains their audiences and also leaves them thinking about issues relevant to the U.S. and Mexico today.

“Music,” Alberto said, “has a power to cause you to reflect on a subject that you wouldn’t think about otherwise.”

Tickets are $30. More information is available at www.cachearts.com.