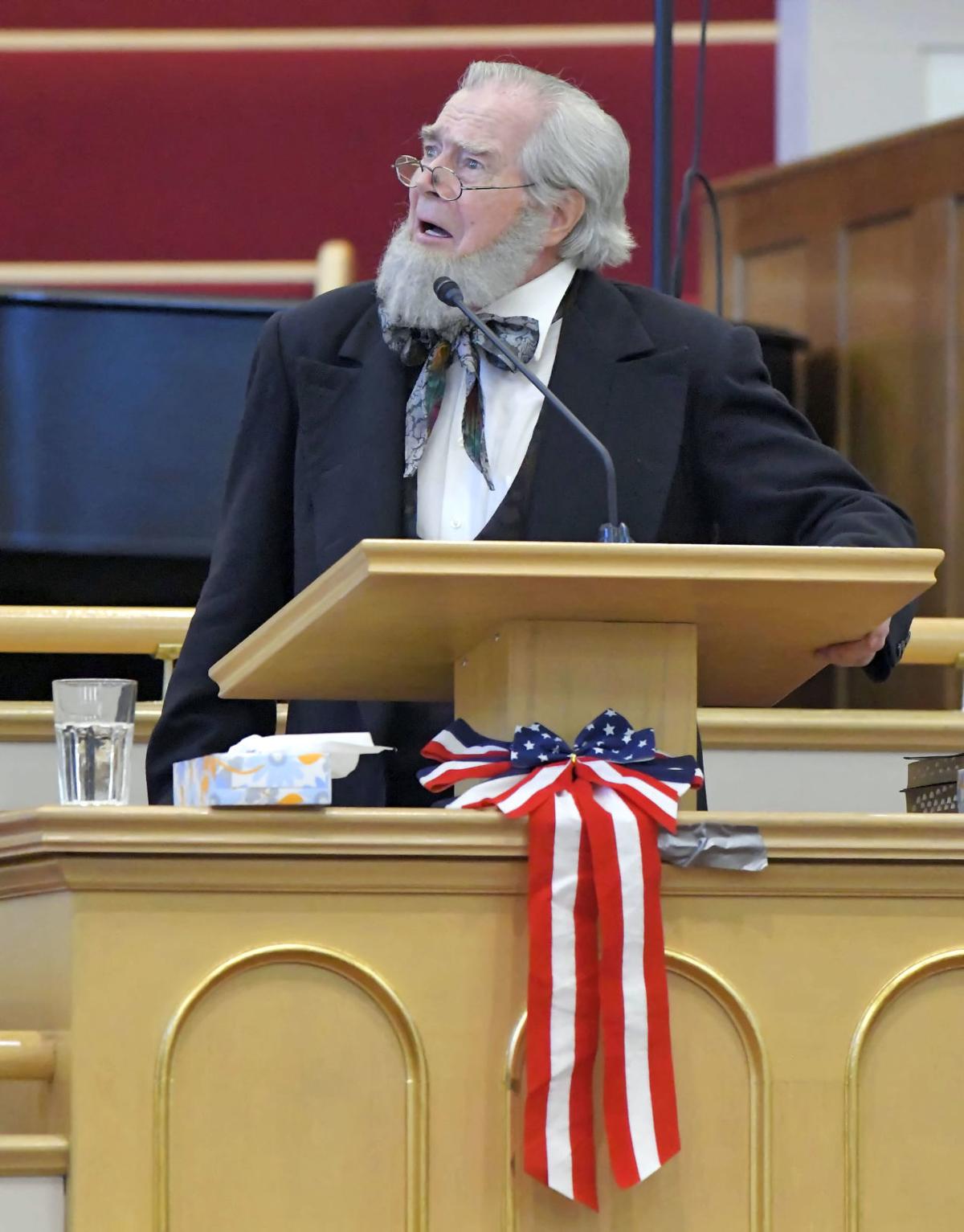 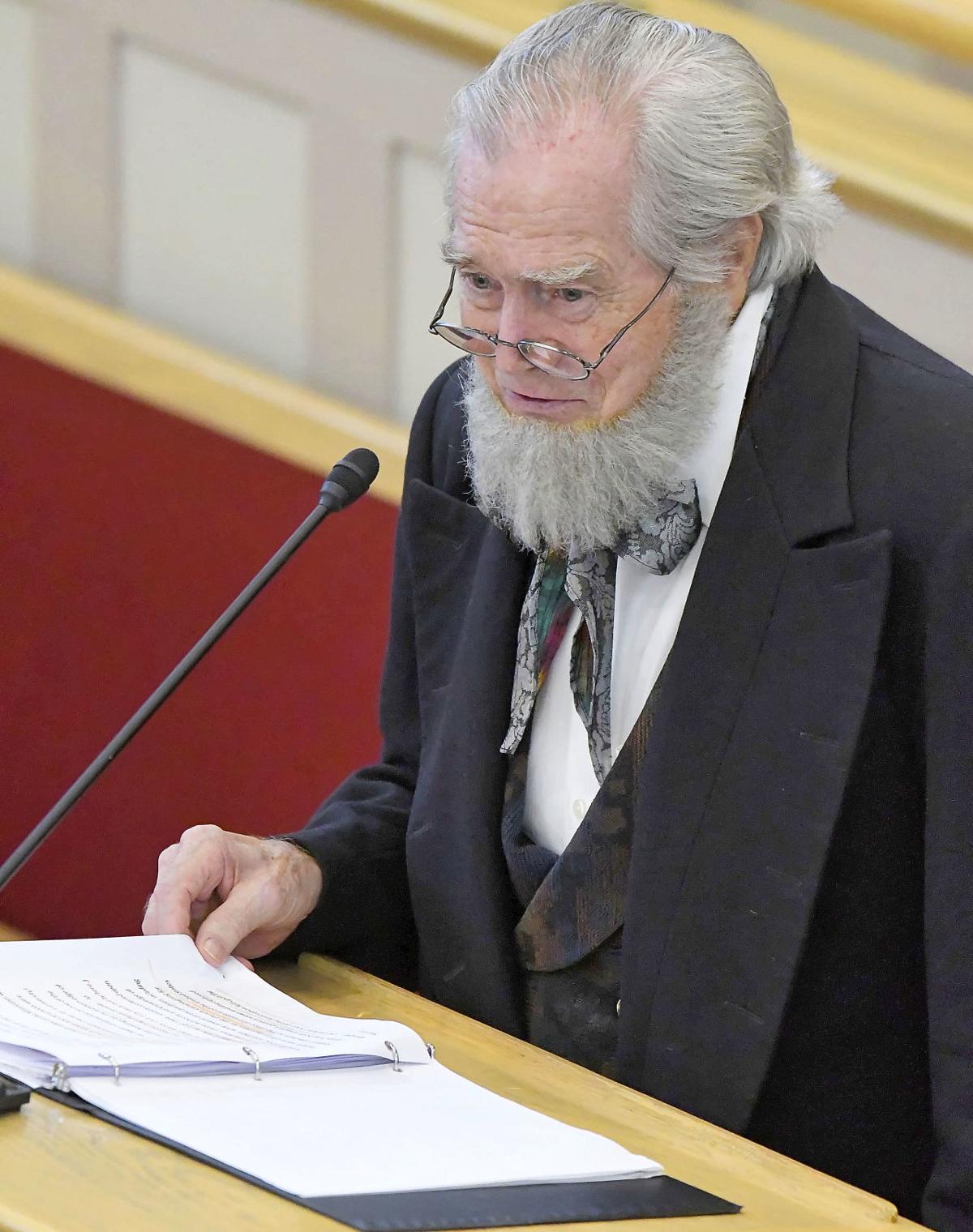 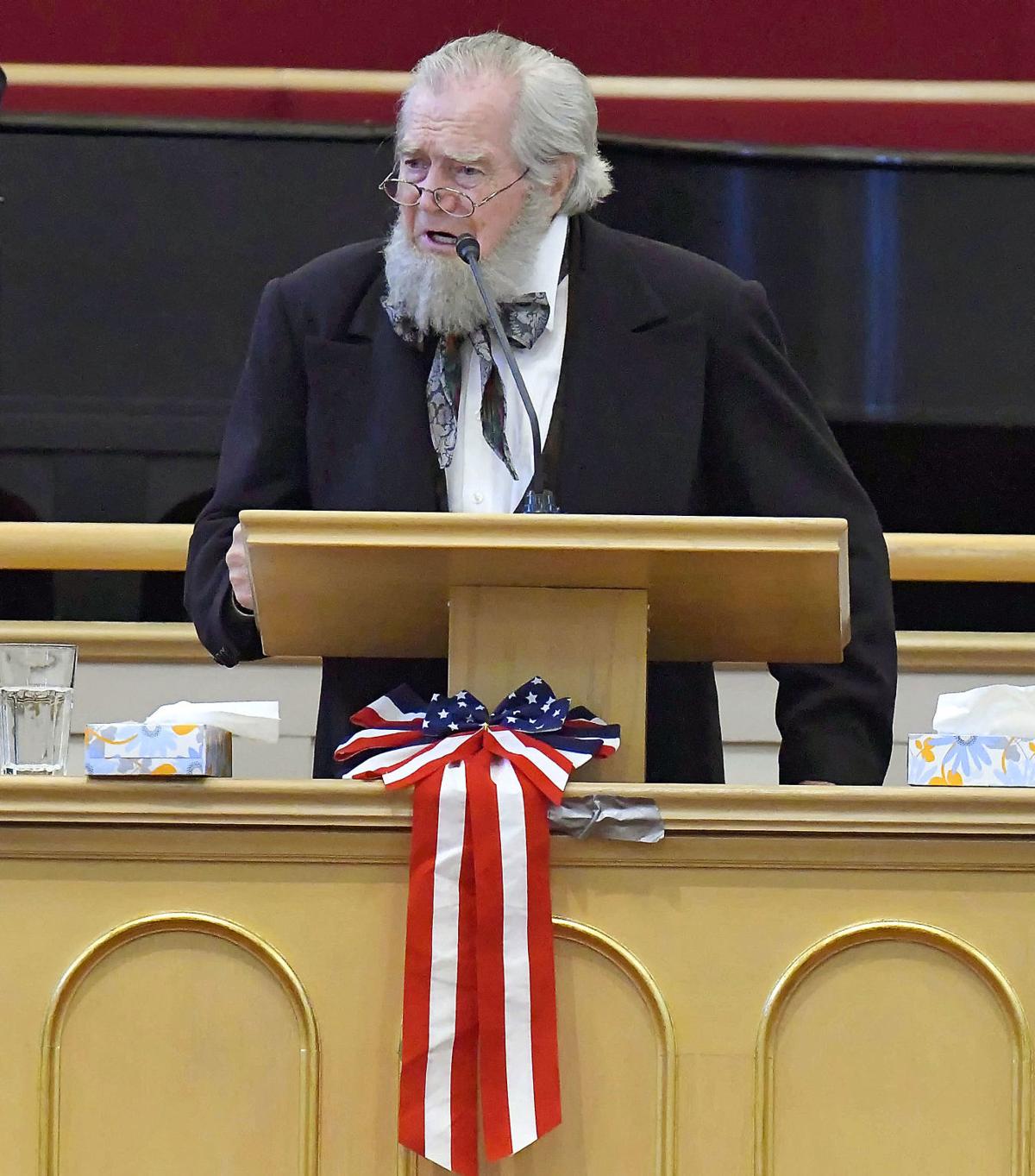 That man was none other than Utah-based actor Bryce Chamberlain, who was playing Brigham Young, and his audience responded to him with comments as if they were speaking to the second president of The Church of Jesus Christ of Latter-day Saints. One person complimented his old fashioned necktie; another jokingly asked if Brigham brought his other wives with him to the tabernacle.

Chamberlain, 87, who has numerous film and stage credits to his name, seemed to take it all in stride moments before his one-man performance, “An Evening with Brigham Young.” The show was part of Cache Community Connections' summer concert series.

“It is good to be here with you tonight, bringing fond memories of pleasant times of friends and loved ones many years ago," Chamberlain said in character, as a taped soundtrack began to play. "I had to come back, see what’s going on around here.”

Young visited Logan when the tabernacle was under construction, according to research found online from renowned late church historian and USU professor Leonard Arrington. But that was not that memory Chamberlain, playing Young, focused on during the 45-minute act.

Instead, he spoke of Young’s impressions of Joseph Smith, Jr. and the church’s belief that God chose him to be the institution’s inaugural leader.

“The Lord had his eye on him (Smith) — and his father and his father’s father and their progenitors, clear back to Abraham,” Chamberlain said. “When I first heard him  preach, he brought Heaven and Earth together.”

Church leaders believe Young helped carry out the “reestablishment of truth and ordinances,” also known as the restoration of the Gospel, for 30 years as the Latter-day Saints’ second president, according to a 1977 article called “Brigham and Joseph,” found on the church’s website. The article sheds light on the relationship between the two men.

Being the Latter-day Saints’ second president is something that Young might not have been able to do had he not met Smith, whom Young believed was “the greatest man on earth,” the article said.

That sentiment was echoed in Chamberlain’s performance on Wednesday. Young’s appreciation for Smith was so deep, Chamberlain explained to the tabernacle audience, that the very mention of the prophet’s name had an impact on the Latter-day Saints’ second president.

“I delight to hear it. I love it!” Chamberlain said, in character. “I feel like shouting ‘Hallelujah!’ all the time when I think I ever knew Joseph Smith, the prophet whom the Lord raised up.”

For years, Chamberlain put on a dash of makeup, a frock coat and boots to get into character as Joseph Smith, Jr.

The show, “Joseph – The Man, The Steer,” was a hit, performed before hundreds of thousands of people in the United States and around the world. His young children would go with him, taking care of the show's technical aspects and selling recorded tapes of the performance.

But years later, it dawned on Chamberlain that it was time for a second transformation — one that had more to do with his age than his interest in playing the young LDS prophet.

“I couldn’t play Joseph, the character, much longer into my 70s, 80s, or whenever I started giving out in terms of enthusiastic leadership style and the wonderful spontaneity I needed for Joseph,” Chamberlain said in an interview with The Herald Journal. “I decided, well, why don’t I talk about Joseph from Brigham’s point of view?”

That idea turned into the one-man performance, “An Evening with Brigham Young.”

A Latter-day Saint himself, Chamberlain’s passion for portraying Brigham Young’s demeanor starts with his admiration for the man, whom he said had warmth, sincerity and a commitment to live like the church’s founding prophet.

Chamberlain has researched historical documents, examined speeches and read books about Young to guide his portrayal.

“I’ve interpreted from that … what kind of a man he was,” Chamberlain said. “I feel fairly secure in the handle I have on who he is, how he might have sounded and how his gestures and … his expressions of grief and sorrow.”

Although there is no recording of Young’s voice, Chamberlain believes his own version of it is practical for the stage.

“It even changes in terms of inflections and warmth and bombastic gestures,” he said.

Chamberlain loves playing Smith and Young, he said, because they’re open, free and expressive men to act out.

“I love that on-stage ability to express that,” he said. “That way of just taking it as it comes, meeting it head-on … The more I get that kind of opportunity, the more I enjoy a stage presence of the character I’m trying to represent.”

REFLECTIONS ON THE PERFORMANCE

Miguel Provoste, a Latter-day Saint who lives in Chile, was one of several people who came to the Logan Tabernacle to watch Chamberlain perform. He had never heard of the one-man performance but was glad he went.

“I am only familiar with a few parts of Brigham Young’s life, but I do know some parts because it is important to the history of the church,” Provoste said through a translator, his friend, Weston Miller. “I really feel like I have traveled through time and watched Brigham Young as if he were here.”

Miller said he appreciated the fact that Chamberlain “took the style of Brigham Young and he adapted it to sort of a modern-day perspective.”

Miller was referring to a statement Chamberlain read from current church President Russell M. Nelson toward the end of the performance.

“‘The constant availability of social media and a 24-hour news cycle bombard us with relentless messages,’” Chamberlain read. “‘If we are to have any hope of sifting through the myriad of voices and the philosophies of men that attack truth, we must learn to receive revelation.’”