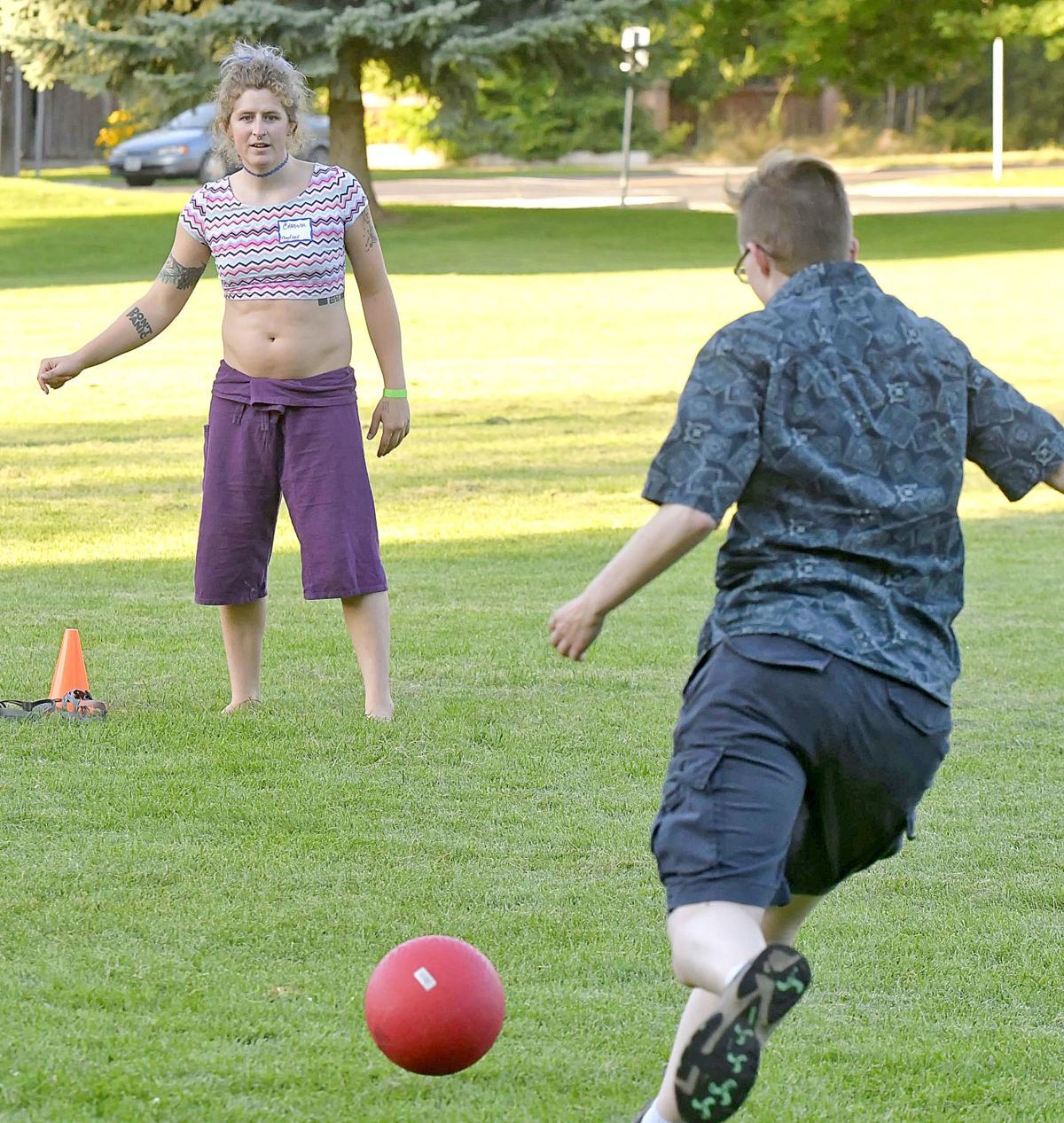 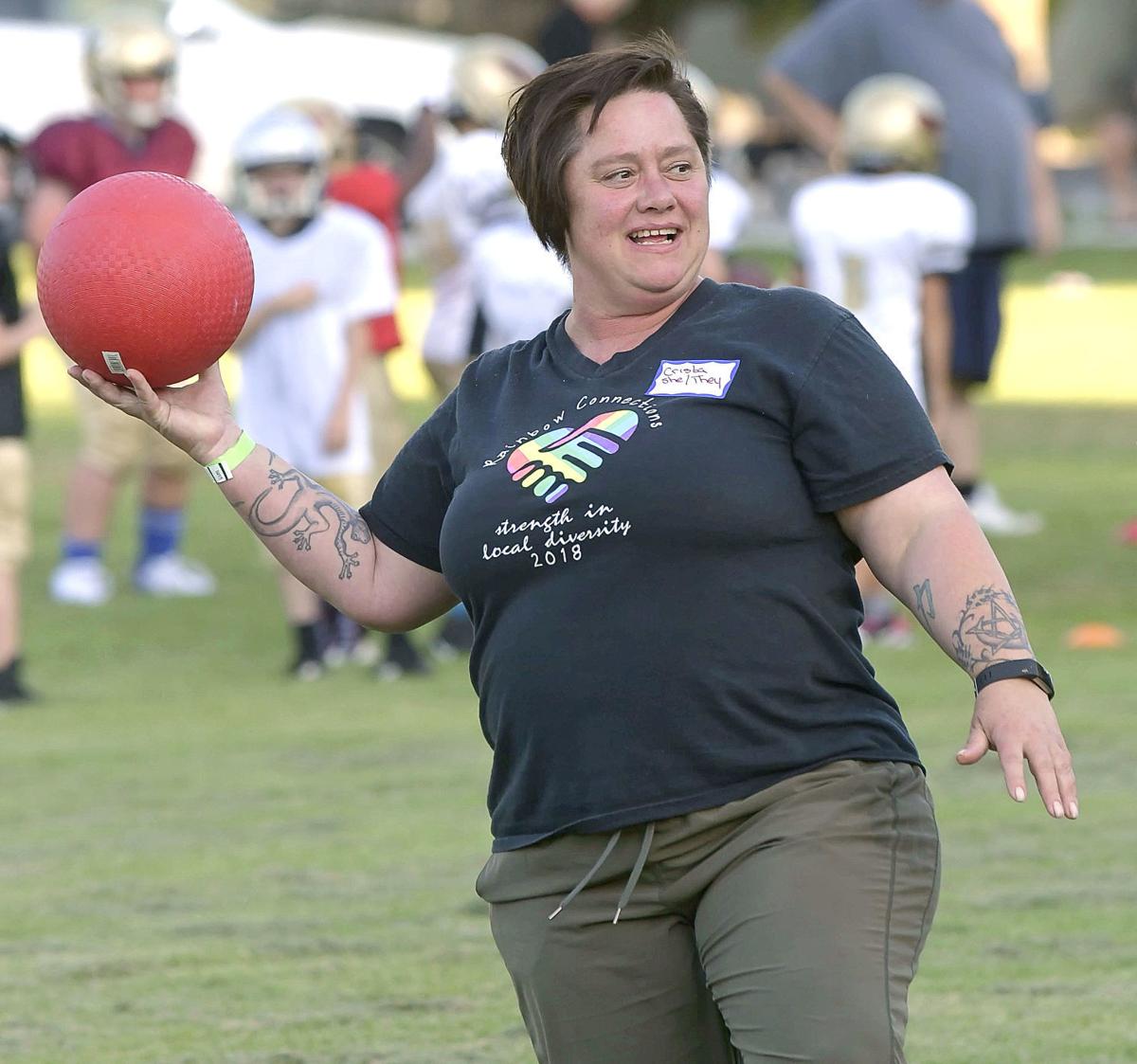 Crista Sorenson plays a game of kickball on Tuesday at Merlin Olsen Park.

Crista Sorenson plays a game of kickball on Tuesday at Merlin Olsen Park.

Logan’s Merlin Olsen Central Park was alive with activity this past Tuesday night, with football practice, kids on scooters and kickball.

Two different rounds of kickball, to be precise. A group of youth played before members of the Logan Pride Foundation and their allies took to the field.

And the foundation, a support group for the city’s LGBTQ+ population, had its own unique way of playing the game, too. Mats bearing the colors of the pride flag were placed in a baseball diamond configuration and players did not run around the bases to score; instead, they went from home plate, to a base of their choice and return home.

“The rules for this time were a spicy mix,” Crista Sorenson, Logan Pride Foundation vice president, said when discussing what her group calls “Queer Kickball” in an interview with The Herald Journal. “It’s a nice, fun physical activity — something that gets you off the couch.”

Christa Cannell, director of recreation and wellness with the Logan Pride Foundation, said the idea for “Queer Kickball” came about through a conversation between her and Sorenson.

“We were talking about how we needed more physical stuff to do,” Cannell said.

“When Christa and I chatted about hosting more physical activities, it seemed like an inexpensive and manageable one,” Sorenson wrote in an email to the newspaper.

Queer Kickball began in April of this year and is held twice a month.

Sorenson added, via email, “Kickball also does not require a person to be a super athlete to play. Having it in a public park allows for those who do not wish to play the option to just chill in the park.”

One of the spectators of Tuesday night’s game was Courtney Child, Cannell’s partner. Child played kickball with the Pride Foundation at the park once before.

“We divide up into teams and we don’t keep score or anything; it’s just for fun,” she said. “We build relationships.”

Cannell believes having a night of kickball, an event anyone can play regardless of their orientation, allows people who identify as LGBTQ+ to feel more comfortable being who they are.

“I think what’s especially important about this activity is that it’s being conducted in a way that doesn’t shame or hinder your ability to be yourself,” she said.

Participants being themselves and inviting others to play with them “really opens up the floor for being able to explore your identity,” Cannell said.

Sorenson echoed those comments, telling the newspaper, “It is necessary to create opportunities like this so that the community as a whole can have space to be their truest selves.”

“There are some who might feel uncomfortable or flat out unsafe with their identity/gender expression,” she wrote. “We feel it is our duty to create activities that everyone can do with the messaging, ‘this is a safe zone for our queer friends and family.’”

Sorenson wishes that people in Cache Valley could play kickball in a park without anyone “feeling uncomfortable or unsafe,” but that time has not yet come.

“While we wait for that day, come down to the park and play some kickball or just socialize,” she wrote.

Cannell said Queer Kickball is just one of several recreational events she has come up with — some for LGBTQ+ and their allies, and others exclusively for those who don’t identify as straight. Examples include “Pride Hike” and “Rainbow Yoga.”

“I organize these events to build community and relationships between the queer people and allies here in Logan,” Cannell said.

One of those allies is Kandace McCreary, who has participated in Queer Kickball several times. She attends because she feels a “love and understanding for everyone.”

“I don’t think it makes a difference who you love or care for,” McCreary said.

Chad Lowrey is another LGBTQ+ ally who played Queer Kickball on Tuesday night.

“One of my mantras in life is ‘one team, one fight,’” he said. “I think that’s extremely important, especially with people that may be typically singled out for one reason or the other, whether it’s the clothing you wear or the lifestyle you live. I don’t think that’s right. I think it’s important for us to show unity and support.”

Lowrey, who has lived in Cache Valley most of his life, believes the area could do a better job at supporting LGBTQ+ people.

“We’re starting to get there, but we’re about 10 to 15 years behind everybody else,” he said. “Given where we live, in Utah … traditional conservatism, the mentality that’s there, I think we have a lot more work to do. But we’ve made ground and we’re continuing to make that ground.”

Lowrey believes Queer Kickball is one way to get more people to support the local LGBTQ+ population.

“It brings people out to something that unites us,” she said. “Everybody loves kickball. It gets you to interact with everybody and understand, ‘Hey, you are just like I am.’”