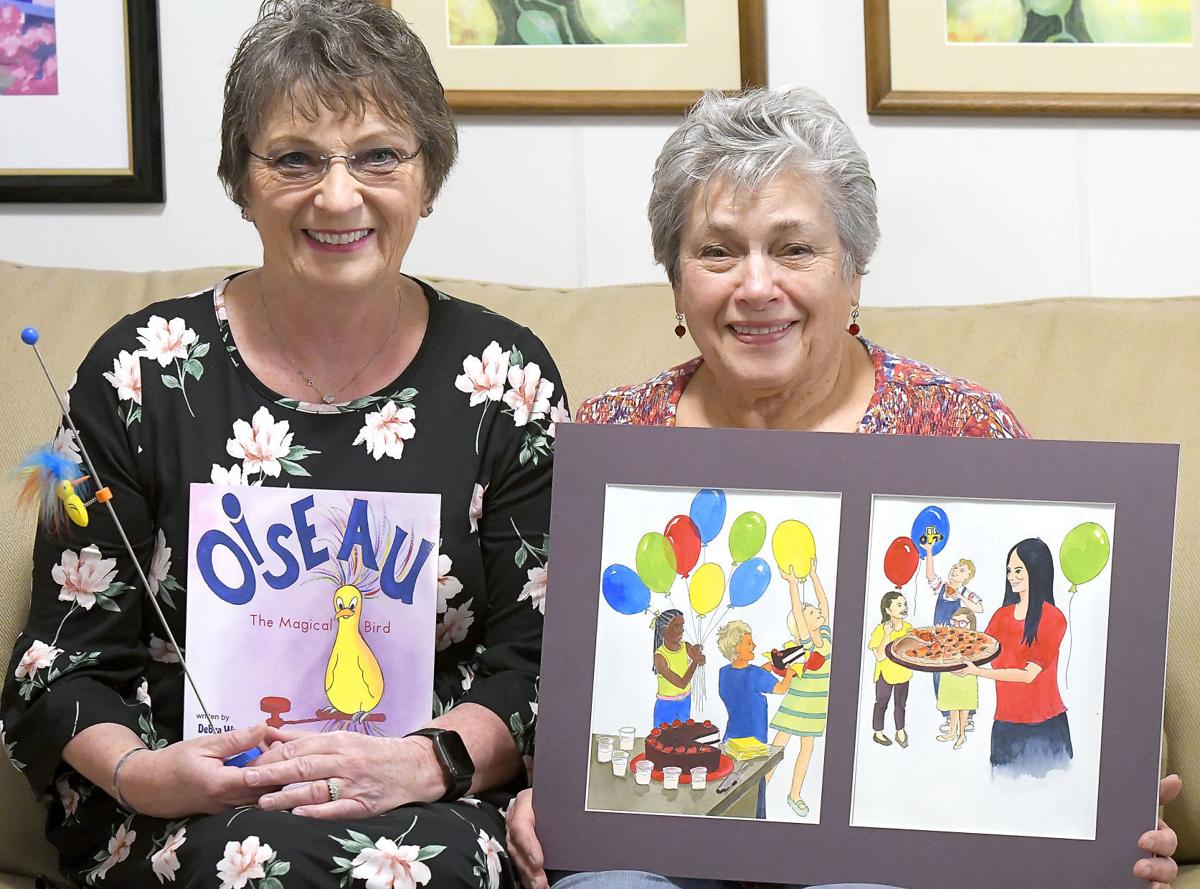 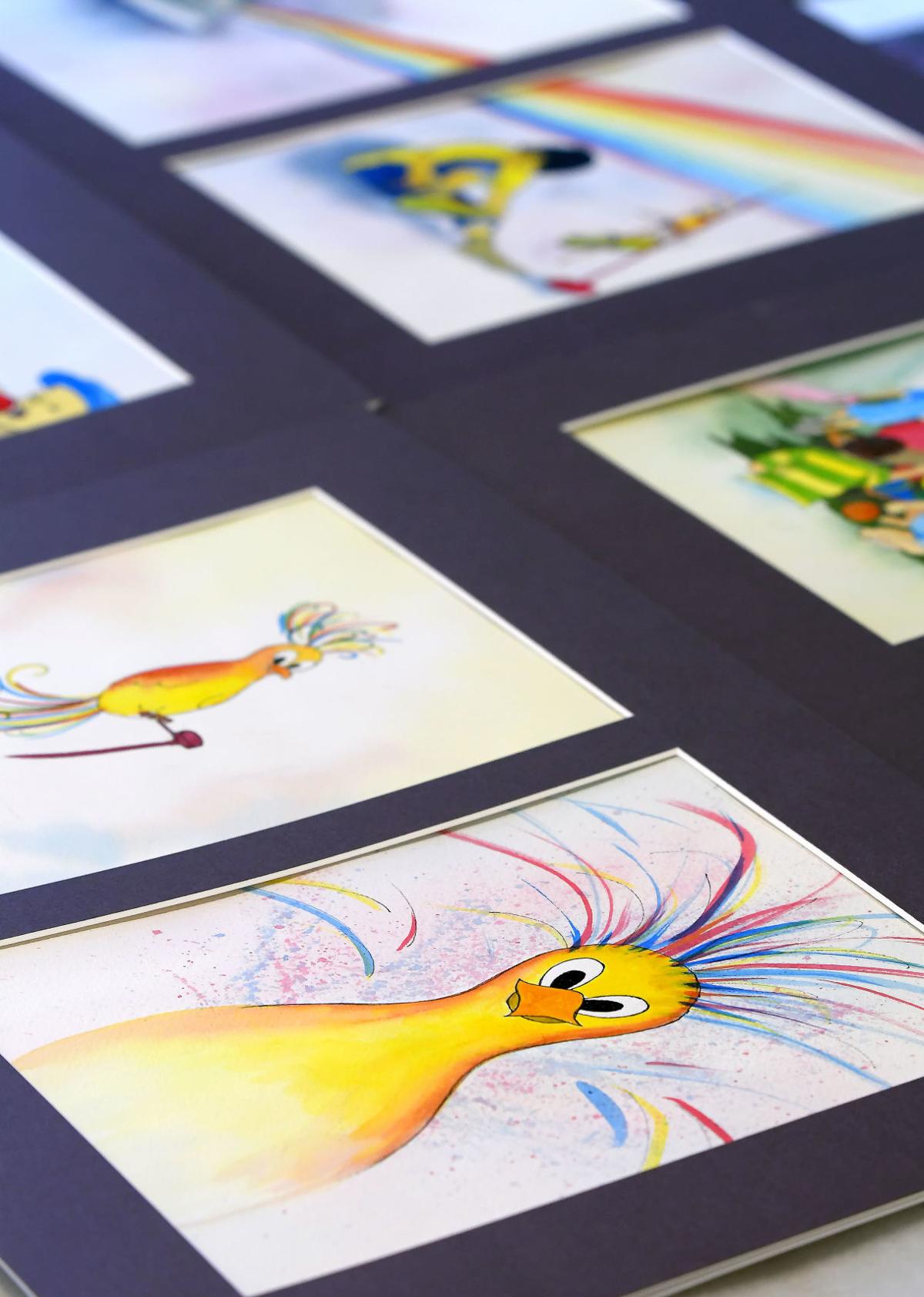 Illustrations from the book “Oiseau The Magical Bird.”

Illustrations from the book “Oiseau The Magical Bird.”

“Oiseau: The Magical Bird” isn’t local author Debra Wosnik’s first book, but it is a book of firsts.

Wosnik’s earlier books, including “The I Hate Wendy Club” and “Life is Not Fair,” were written during her time as an educator to help teachers address complex topics with students. Though the books had color covers, their inside art was black and white. “Oiseau” (pronounced “wah-zoh”) is her first book intended for a broader audience, both in schools and at home.

“When I retired and moved up here, one goal I had was that I wanted to write a book that would be in color all the way through, a picture book that could be sold to everyone,” Wosnik said.

It’s also a first for Logan artist Andi Jorgensen, who illustrated the book. Jorgensen is an eclectic artist with a wide range of work, but this was her first time working on a narrative piece.

But “Oiseau” also presents a personal first for Wosnik — the book is in part meant to spread awareness for CCD Smiles, a nonprofit charity founded by Wosnik’s daughter that focuses on cleidocranial dysplasia.

CCD is a rare skeletal disorder found in only about one in a million births. It can have a number of symptoms, including open fontanelles and missing collarbones at birth, but it’s most often characterized by abnormalities in the development of teeth.

Wosnik’s daughter, Dr. Kelly Wosnik, was born with CCD. In 2013, she started CCD Smiles. Two of CCD Smiles’ goals are funding treatment for CCD symptoms and spreading information on treatment through doctor networks to raise the level of care across the country.

CCD often requires multiple surgeries a year throughout childhood, and until recently, knowledge about the condition wasn’t widely available to regional doctors, many of whom only worked with one patient with CCD during their careers due to the disorder’s rarity.

Awareness of CCD in recent years has risen due to Gaten Matarazzo, a breakout actor from Stranger Things who has CCD. Matarazzo got in contact with CCD Smiles through his father in 2016, and Kelly and Matarazzo have worked together to promote public knowledge of the disorder, both to educate the broader population and to help those with CCD find resources and community.

The eponymous protagonist of “Oiseau,” a colorful, fluffy feathered bird, may not seem like an obvious choice to spread awareness for CCD Smiles.

The technicolor bird’s story is based on a classroom toy used by Wosnik’s fifth grade teacher, which Wosnik later used in her own classes.

“When I started teaching, I called Ms. Robinson and I said ‘I’m going to teach 5th grade,’ which is exactly what she taught,” Wosnik said. “She was so excited for me and I said, ‘I’m gonna use Oiseau.’”

Oiseau, French for “bird,” is a type of toy-tool hybrid, a metal pole about a foot high, with a fluffy bird with a long beak attached by a spring. After bringing Oiseau to the top of the pole and letting go, the bird bounces its way to the bottom in a jerky, uneven pecking motion, making unexpected hops and bops on the way down.

“It’s actually used for transitions,” Wosnik said, explaining that Oiseau could be used as a random timer for kids to move between activities by gamifying what would normally be a slow chore. “You don’t even really have to have a prize, they just want to do it to see if they can do it.”

“Sometimes he jumps and sometimes he’s slower; he gets stuck and they go, ‘Yay, he’s stuck!’” Wosnik said. “I’ve always just had him on my desk.”

In the book, Oiseau travels from scene to scene, helping kids stay on track, meeting a classroom and a ballet class, and helping a boy tie his shoes.

As Wosnik and Jorgensen worked on “Oiseau,” Wosnik saw the opportunity to tie the book to CCD.

“I just wanted to do something that I can do, and I can write children’s books,” Wosnik said. “Just to get it out there, so the money from this can go directly to them.”

Wosnik said part of the reason the “Oiseau” took so long from development to publishing was the difficulty of finding a way to sell both the bird and the book. Publishers weren’t able or willing to package both items together.

But the setback offered a unique opportunity to partner with CCD Smiles, and Wosnik decided to sell Oiseau, in his original form, through the organization’s shop.

“Because we didn’t package the bird and the book together, it was easy to say, ‘Oh, well, this goes to that,’” Wosnik said.

On the back of each copy of “Oiseau” is a photo of Kelly Wosnik and Matarazzo alongside a short sentence pointing readers to the shop where they can buy their own Oiseau.

“Everything from the bird goes to CCD Smiles,” Wosnik said. She’s confident that readers will want a Oiseau of their own.

“You can’t just have the book without the bird,” Wosnik said.

ART OF THE BIRD

Wosnik and Jorgensen began working together around two years ago.

“We met in a swimming class — water aerobics — and she told me about her book,” Jorgensen said.

“I came to your gallery and bought a painting,” Wosnik said.

“That’s right — and so she knew a little bit what I was about, and so she asked me to illustrate,” Jorgensen said. “I had never done anything like that before, and I thought, ‘Well here’s an interesting challenge.’”

Jorgensen said Wosnik gave her a lot of freedom to find the artistic style and perspective she wanted for the art.

Once she joined the project, Jorgensen said she began looking for art references everywhere.

“Whenever I saw children, I was taking pictures, or drawing, whether it be in little classrooms, or on the beach, or wherever I was,” she said.

It took her about a year and a half to put all of her materials together.

Wosnik and Jorgensen presented the book to kids at Wosnik’s old school in Davis County, to an ecstatic response.

“I think it’s neat for kids to know that, if they have an idea, they can write a book,” Wosnik said. “If they want to do the pictures they can do the pictures. You know, just go for it.”

“Oiseau: The Magical Bird” is available on Amazon. The Oiseau toy can be found at ccdsmiles.org/product/oiseau-woodpecker-toy.