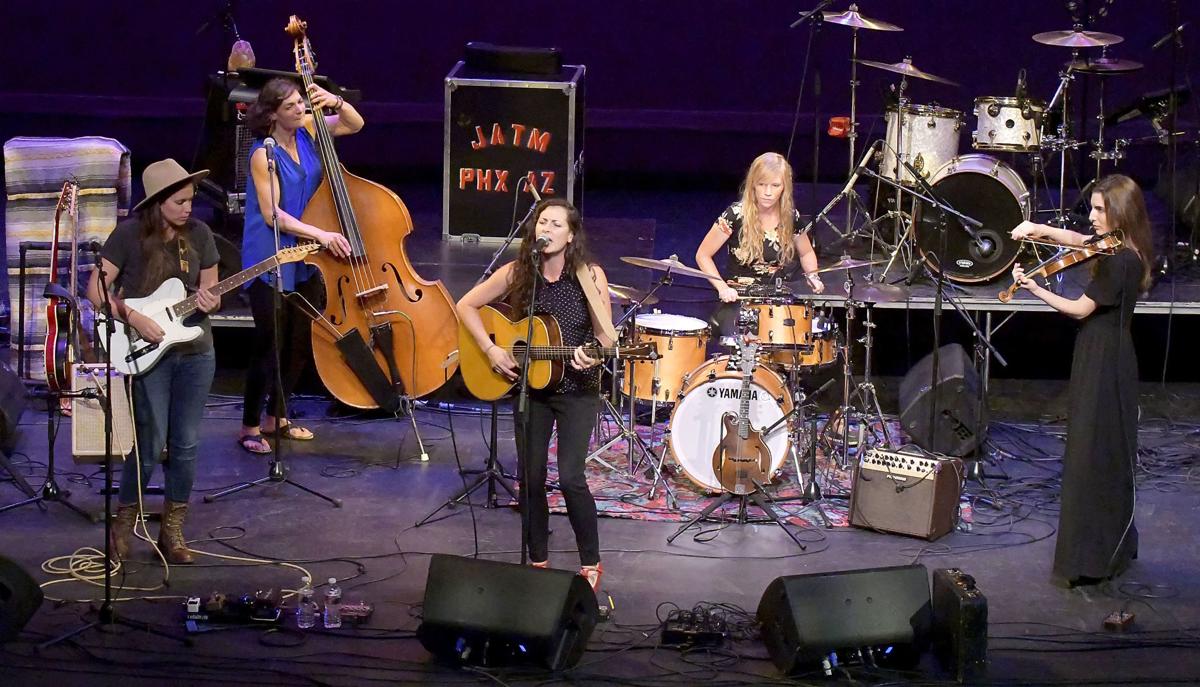 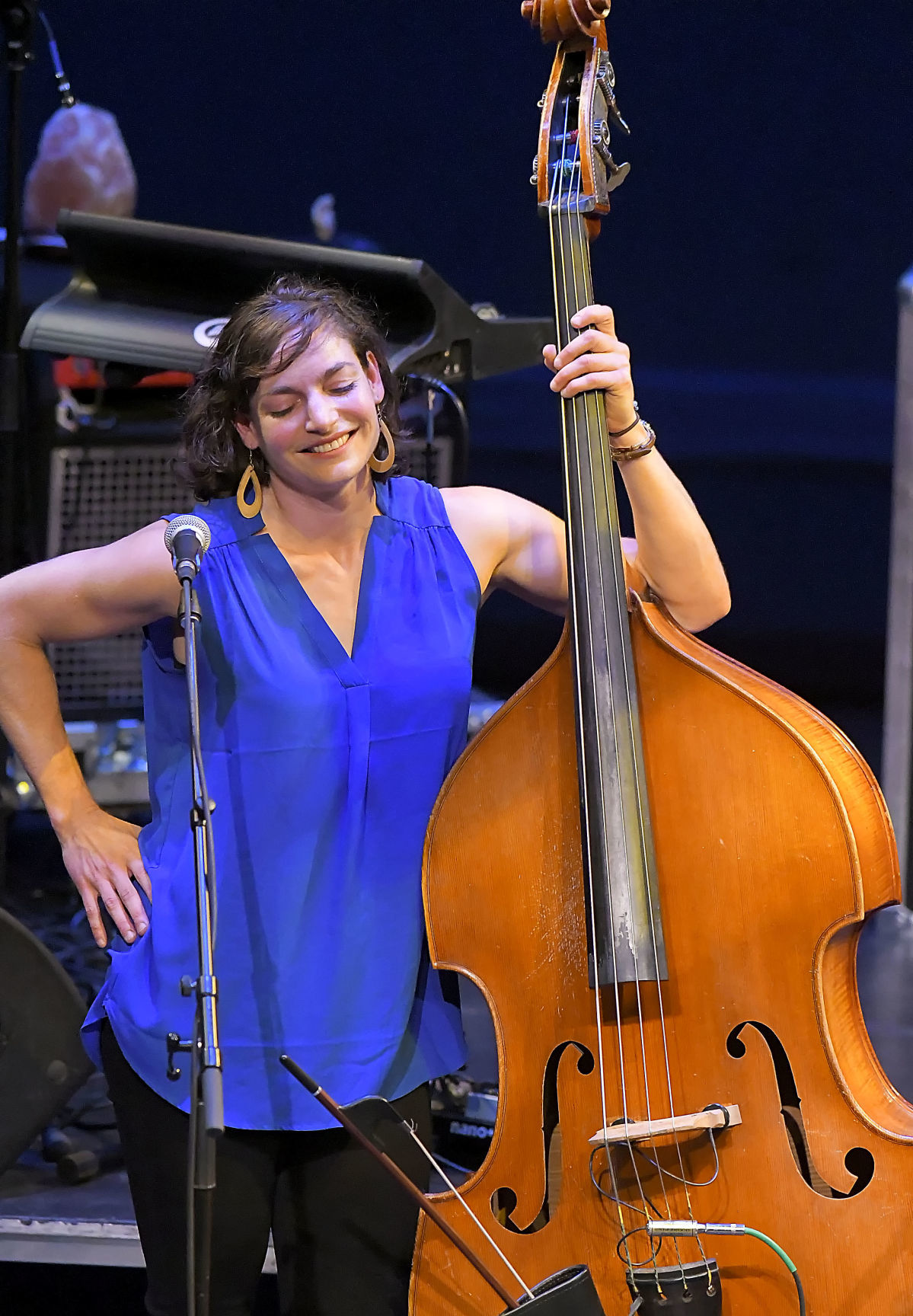 Kendall Becker, of Mama LongLegs, performs at the Eccles Theatre on Monday. 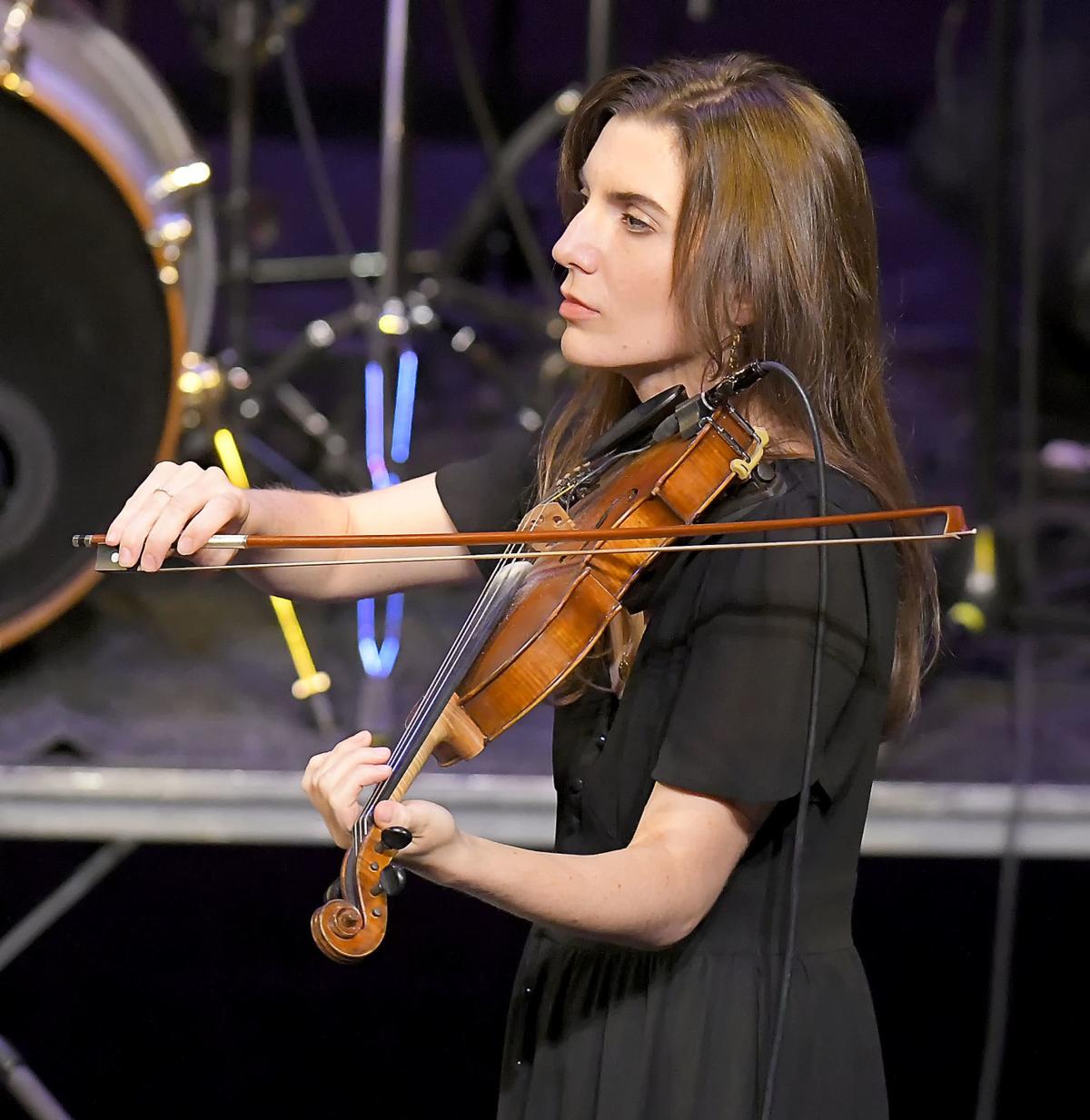 Julie Taquin, of Mama LongLegs, performs at the Eccles Theatre on Monday. 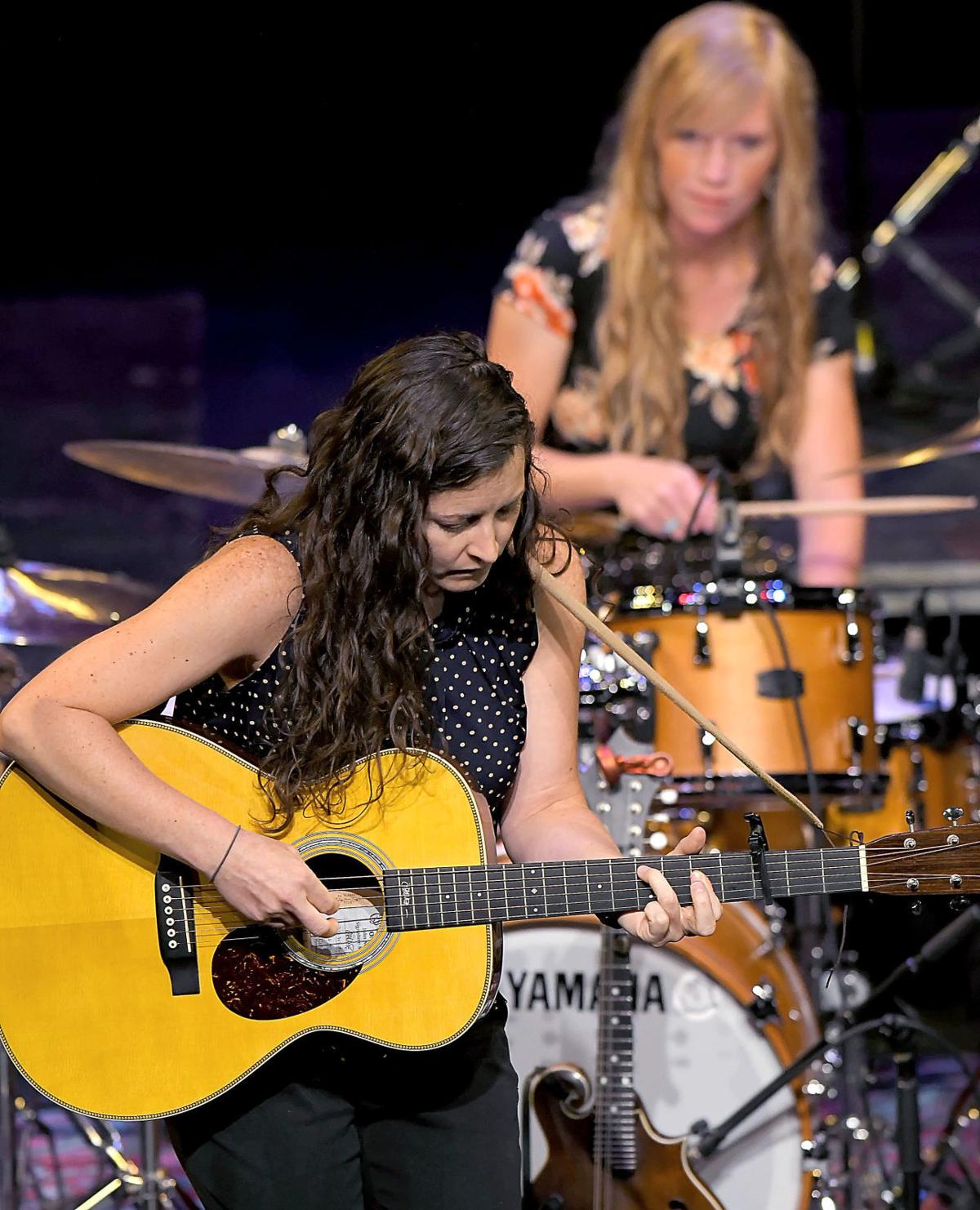 Megan Simper, left, and Emily Densley, of Mama LongLegs, performs at the Eccles Theatre on Monday. 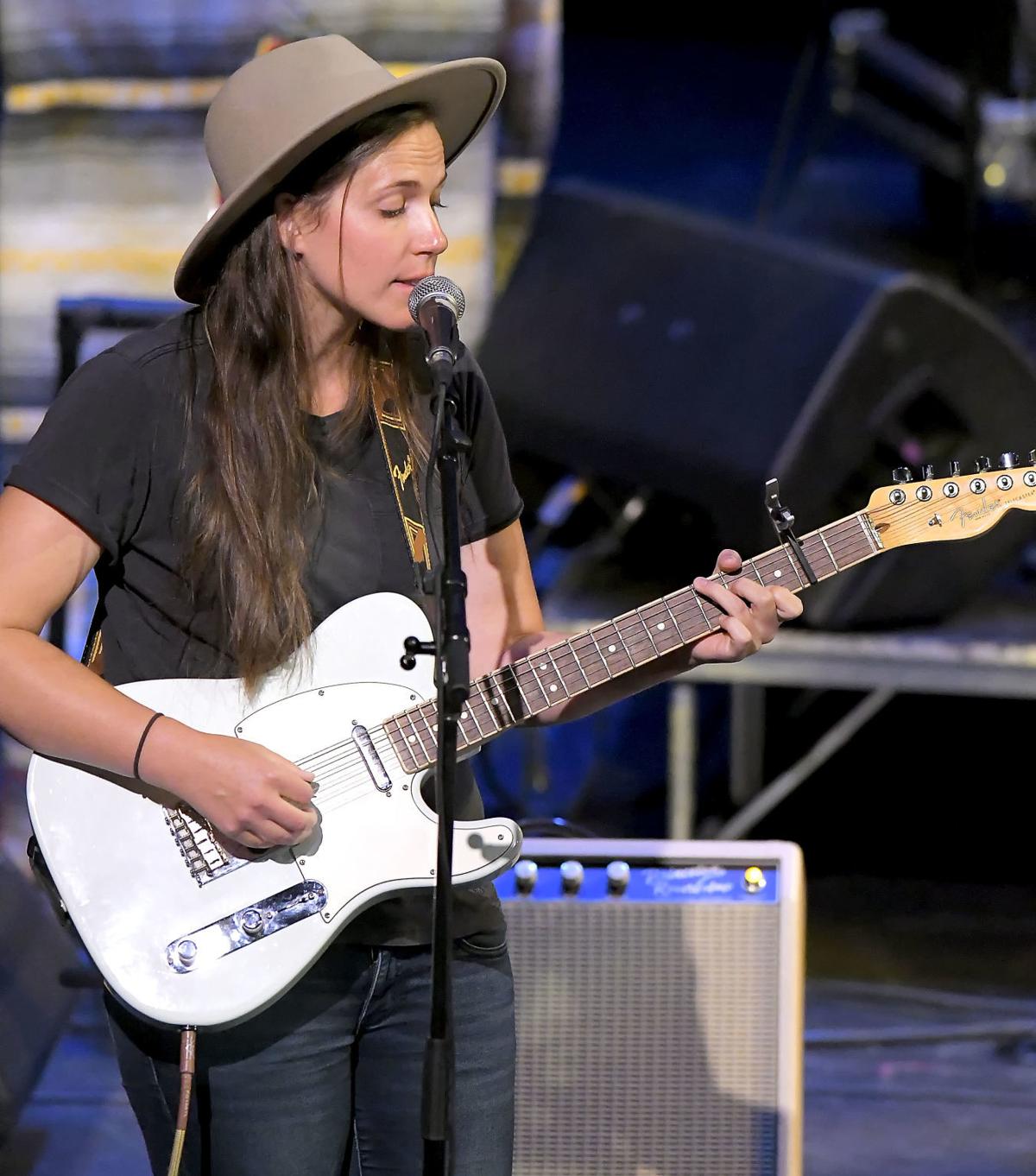 Allie Harris, of Mama LongLegs, performs at the Eccles Theatre on Monday.

Kendall Becker, of Mama LongLegs, performs at the Eccles Theatre on Monday.

Julie Taquin, of Mama LongLegs, performs at the Eccles Theatre on Monday.

Megan Simper, left, and Emily Densley, of Mama LongLegs, performs at the Eccles Theatre on Monday.

Allie Harris, of Mama LongLegs, performs at the Eccles Theatre on Monday.

When Allie Harris was a girl growing up in Tremonton, she’d see daddy longlegs in her house and wonder why there weren’t any “Mama LongLegs.”

“I was terrified of spiders growing up. I didn’t want to touch them,” Harris said. “But I was fascinated watching them … they were just everywhere.”

Years later, as a young woman who graduated with a music degree from Utah State University, Harris has found some Mama LongLegs. Except they’re not a nuisance; they are her bandmates: Emily Densley, Megan Simper, Julie Taquin and Kendall Becker. Together, they form the group Mama LongLegs.

“Here we are,” Harris said during an interview in the green room of the Ellen Eccles Theatre on Monday night before the band’s show. “Why not? Why can’t there be Mama LongLegs?”

The band was the opening act for the Arizona-based Indie Rock group Jared & The Mill this week, but the Cache Valley-based musicians have something more to talk about than the fact that their profile is rising. This fall, Mama LongLegs will release its first album, “Time To Let You Go.”

The album’s title track was one of numerous songs the band performed during its 45-minute set at the Eccles before a modest crowd that was not disappointed in the members’ versatility.

Becker played upright bass, mostly plucking with her fingers and other times using a bow. Harris switched between acoustic and electric guitars, sometimes using a foot pedal to get different sounds out of it. Simper played mandolin and acoustic guitar and sang lead vocals. Densley played drums, switching up the sticks between traditional, ball or brush-tipped, depending on the song. Each member, including Taquin on violin, got a chance to solo.

The songs were all part of a genre the band members dub “alternative folk Americana.”

“It’s ranging,” Taquin said, when the newspaper inquired about the band’s style of music. “What’s interesting about the group is everyone kind of comes with their own musical background and everyone is influenced by a bunch of different genres … We’re genre-fluid — Megan’s term.”

Mama LongLegs formed when Harris and Simper were both students at USU.

Harris already had the idea for the band name, Mama LongLegs, which was pretty much decided on when she and Simper played an acoustic set at the popular coffee hangout on Logan’s Federal Avenue, Caffe Ibis.

“A good sir of the valley asked what our name was, and I said, ‘Mama LongLegs,’ and he said, ‘Daddy likes,’” Harris said. “That’s when we knew it stuck.”

During that time, the group consisted of merely vocal harmonies, guitar and mandolin, but pretty soon, Harris and Simper wanted to add more instrumentation— and members — to Mama LongLegs.

So Simper asked Taquin and Becker — her bandmates from another time — to join. Last to come on was Densley, a fellow USU student. The three of them attended USU’s music school together but graduated different years.

The gigs only grew in prominence. Mama LongLegs’ first show with its current lineup was Logan’s first Pride Festival.

“I get to hear all my drums with a mix of all their sounds, and it’s super powerful,” she said. “When we started, I was like, ‘We rock!’”

Summers are the busiest time to play, with the band doing one or two shows a week. Mama LongLegs also performs its share of private functions, such as weddings and corporate events.

“I have only positive things to say about the Mamas,” Wesley wrote in an email to The Herald Journal. “It’s been a true pleasure working with such raw talent and well-crafted songwriting. They are very authentic and having been able to be a part of shaping their sound has been such a blessing to me.”

The record is currently being mixed and the release date has not been set.

“We would like to take our time so that it’s top-notch for everybody,” Simper said.

Harris said the album is “the story of a relationship.”

Taquin explained how the album’s title track, “Time To Let You Go,” was written by Simper, who played the song for her bandmates on her porch.

“I think I was the one who was a little more cynical about it,” Taquin said. “After she played it, Megan said, ‘Well, what does this make you think of?’ I remember taking a breath and I said, ‘heartbreak.’ Then it turned into this really awesome band-workshopping of this song, where we trying different themes and trying to match things up and create something that was very inclusive insofar as the band’s input. It was a really cool moment for all of us.”

How the album’s title track was created is emblematic of how Mama LongLegs comes up with songs, according to Taquin.

“We work together to kind of see it blossom into something,” she said, “and we have no way of predicting what that’s going to look like.”

Mama LongLegs plans an album release event, but that, too, has yet to be scheduled.

For now, Mama LongLegs will continue to grace stages throughout the West.

“I think of live performances as an opportunity to listen to my band mates,” Becker said. “I feel like I have to be listening to everyone around me to know what to do. It all comes from them.”

Simper said she feels connected to her bandmates, the music and the audience when she’s performing on stage.

“And that’s a beautiful thing,” Simper said. “My general goal with LongLegs and performing is to lead people back to themselves … through the music they can access those memories and those emotions and feel connected to that greater human experience.”