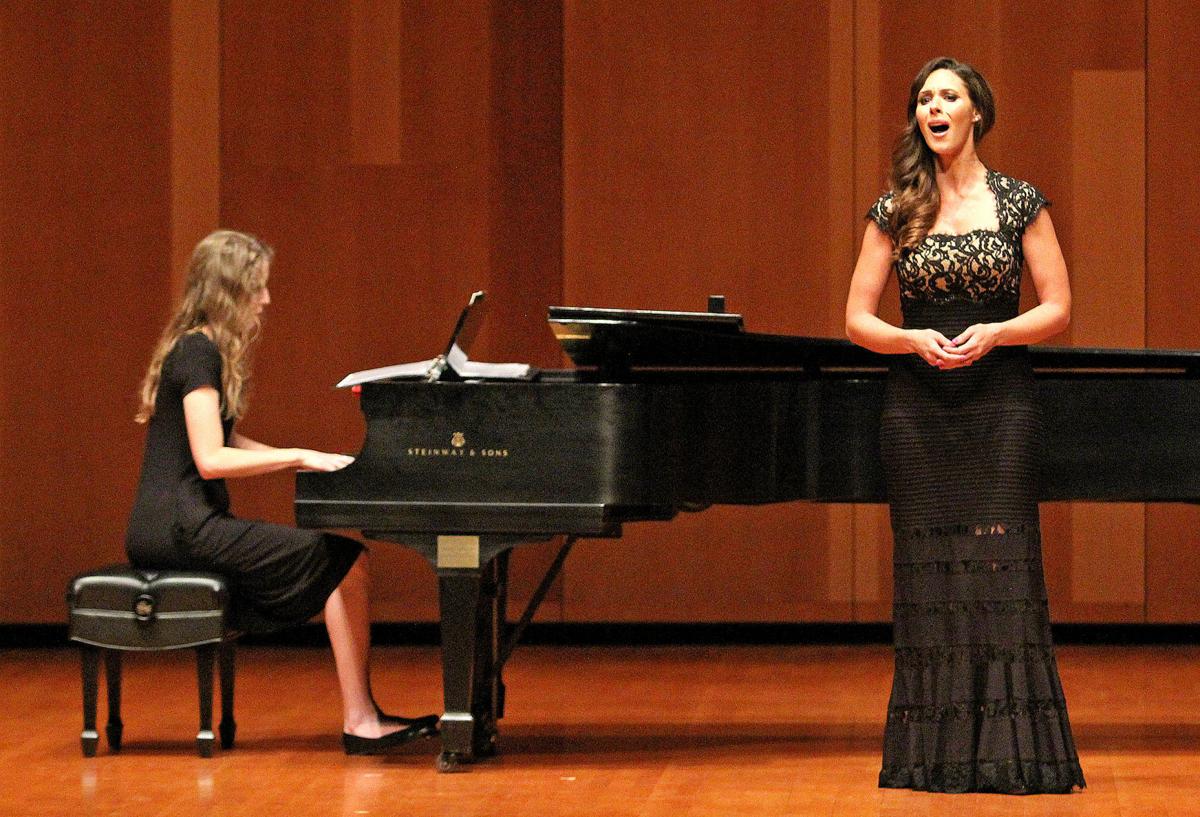 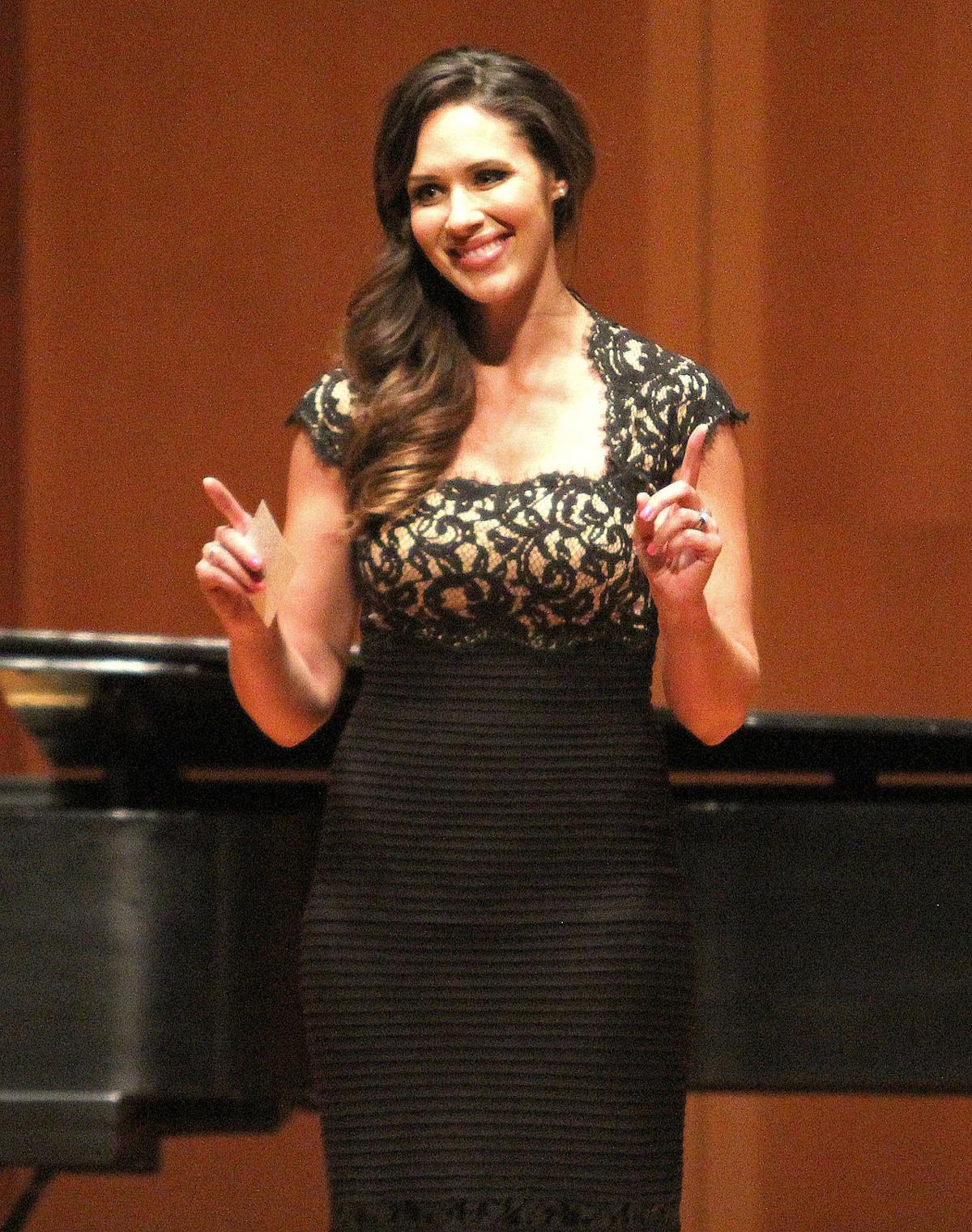 Tamara Mumford, a 2003 graduate of USU, explains her song choice. 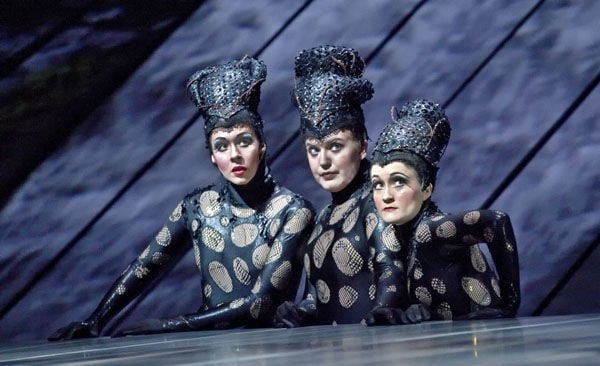 Tamara Mumford, a 2003 graduate of USU, explains her song choice.

During a Q&A session with Utah State University students on Tuesday at her alma mater, New York-based opera singer Tamara Mumford received a bouquet of flowers and a medal from the Caine College of the Arts’ dean.

Craig Jessop named Mumford an “Honorary Caine Scholar,” a title that has only gone to three other people, including the late Manon Caine Russell, who created the full-ride scholarship program called “Caine Scholars for Excellence” after Mumford left USU.

“We are so very proud of her and her many accomplishments in the world of music,” Jessop wrote in an email to The Herald Journal. “(Mumford) is now singing in the top opera houses and concert halls of the world and donors like Dan and Manon and many others were able to assist this promising young woman of great talent along her journey. What a great talent she is and what a great ambassador for the Arts at USU!”

Mumford’s new title was bestowed ahead of a concert she will sing in on Saturday, March 23, at 7:30 p.m. in the Daines Concert Hall in the Chase Fine Arts Center. Tickets are still on sale or can be bought at the door prior to performance.

Adoring the medal hanging around her neck, Mumford commented in an interview with The Herald Journal this week that she always found the university to be a nurturing place.

More than 15 years after she graduated, the mezzo-soprano singer of The Metropolitan Opera sees it as her duty to share her talents and expertise with current students, noting she had limited exposure to professionals when she attended USU.

But after so many visits to the Logan school, she found herself thinking, “Do I really have that much more to say?’’

“But then I think it’s the place where I was when I was a student and I have really grown and learned so much since that time,” Mumford said. “So there really is something that working in this profession gives you.”

SINGING HER WAY UP

Mumford, a Sandy native, remembers singing as a teenage girl during house chores, thinking she was merely impersonating Opera. Then, her father told her that she was actually really good at it.

“Then, it was just sort of finding out that I had this sort of gift,” Mumford said. “This was a talent that was hidden.”

One of Mumford’s high school instructors knew Cindy Dewey, voice instructor and now head of the department of music at USU, and recommended Mumford go study with Dewey in Logan.

“When I auditioned, I just felt comfortable here. It felt like a place I wanted to be,” Mumford said, noting her parents are both graduates of USU.

Dewey would later talk Mumford out of applying to other prestigious institutions, like The Juilliard School in New York, before the young singer decided to settle at USU.

“It just became clear to me that what I needed was a good, technical foundation in singing and education that I could get here,” Mumford said. “In the course of every opera, I wanted to be able to sing leading roles. … and that’s what I could do when I was here.”

“I remember her apologizing for having such a loud, low voice and (I said), ‘You have nothing to apologize for,’” Dewey said, referring to the tenor of a mezzo-soprano.

“What I remember most distinctly is that she worked harder than any other student I had to that point,” Dewey said. “She was an extraordinary student.”

It wasn’t until Mumford’s graduate education — which she was able to apply for thanks to help from the late Russell — that she decided to head east.

Mumford spent a year at Yale University before being tapped, at the age of 23, for a slot in a young artists’ program at The Met.

Mumford made her opera debut at The Met in 2006 and, by her count, has performed over 300 times.

“When you’re classically trained, you’re thinking about … being able to project the voice to a large hall and being able to … soar over an orchestra without amplification,” Mumford said. “There’s something really powerful about the human voice in its rawest form.”

And Mumford, who has received rave reviews in publications like The New York Times and Los Angeles Times, isn’t just singing by herself on a stage; she has played with others and dressed in character for shows like “Götterdämmerung” and “Das Rheingold.” For certain shows, she has also done some high-flying stunts.

“There’s lots of different ways that I’m able to use this talent,” Mumford said.

With the upcoming USU concert, singing Mahler’s No. 3 Symphony, Mumford feels as though her career is in some way coming full-circle. She listened to the late composer’s music for the first time as a freshman.

“I remember just listening to it in (Cindy Dewey’s) office and just crying because I thought it was so beautiful,” Mumford said. “The fact that I get to come back here and sing the music of Mahler has greater importance.”

Singing on a stage in front of an audience, Mumford can have different emotions, depending on the piece. The one she has felt the most recently is gratitude.

“Especially when I sing for my moments and then I’m just sitting on the stage with the orchestra,” she said. “Those moments are when I feel this overwhelming sense of gratitude that this is what I get to do for my job. It’s really a privilege.”