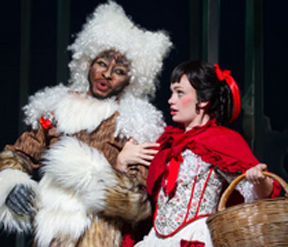 A scene from the Utah Festival Opera’s production of “Into the Woods.”

A scene from the Utah Festival Opera’s production of “Into the Woods.”

In the interest of full disclose, I should confess that I love “Into the Woods.” I’ve seen a half-dozen different versions of this show over three decades and I like it more every time. You will too, after you’ve seen the ongoing production of “Into the Woods” by the Utah Festival Opera & Musical Theatre.

After all, what’s not to love? “Into the Woods” gives audiences a refreshing opportunity to bask in the lyric and musical sophistication of the immortal composer Stephen Sondheim, without all the sex and sarcasm that characterizes many of his masterpieces. Not that there’s anything inherently wrong with sex and sarcasm, but who needs a steady diet of all that jazz?

The musical mixes many familiar fairy tales and asks what would happen to their “happily ever after” if those stories’ characters had real human foibles and frailties.

UFOMT veteran Stefan Espinosa headlines an amazing cast as the show’s protagonist, a childless baker. If, however, you’ve got a standing bet that nobody could ever steal a show from Espinosa, pay up. Newcomer Cecilia Trippiedi explodes onto the stage with her first entrance as a hilarious and slightly homicidal Little Red Ridinghood and never looks back.

In terms of powerhouse vocal performances, Olivia Yokers and Alissa Anderson share the spotlight as Cinderella and the Wicked Witch respectively. Their singing styles are a study in contrast. While Ms. Yokers’ songs touchingly explore the grey area between wishes and genuine needs, Ms. Anderson uses the breathtaking range and

strength of her operatic messo-soprano voice to blow the doors off the Eccles Theatre and nearly succeeds.

As Jack the Giant-Killer, Conor Shatto is another welcome addition to the UFOMT family. His sweetly dim-witted characterization of the farm boy turned felon is a delight.

Benjamin Howard and Robert Gerold also deliver stand-out performances as princes who would rather pursue their heart’s delights than attain them.

Repertory performances of “Into the Woods” will continue at the Ellen Eccles Theatre at 43 S. Main St. in Logan through August 3.

Charlie Schill has directed and performed with theater groups in the United States and overseas. Schill also served as theater critic for The Temple Daily Telegram in Temple, Texas and Pacific Stars & Stripes and Japan Times, both daily newspapers in Tokyo.