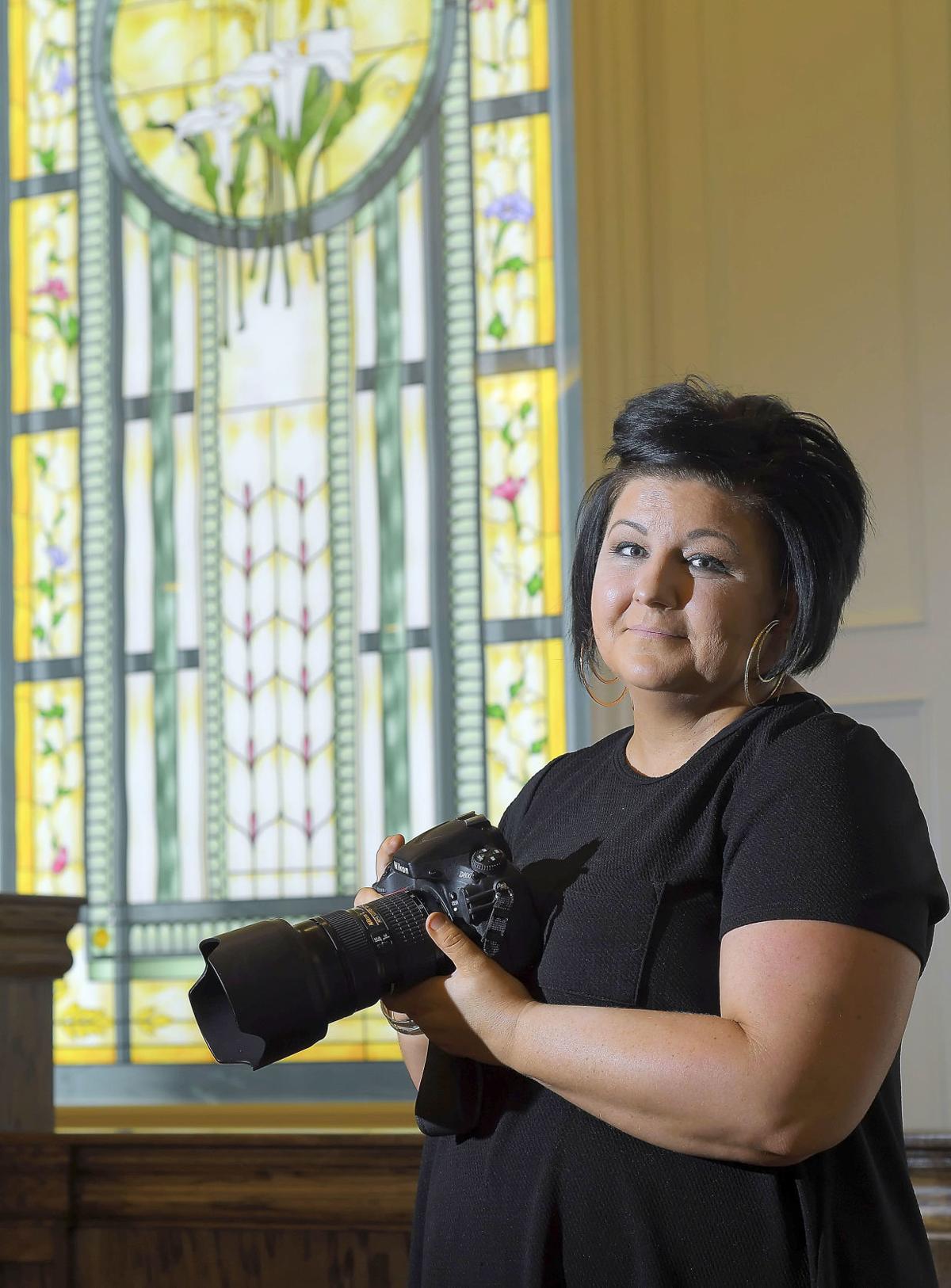 Tandie Nielsen Bankhead, who is a funeral photographer, poses for a portrait in Nyman Funeral Home. 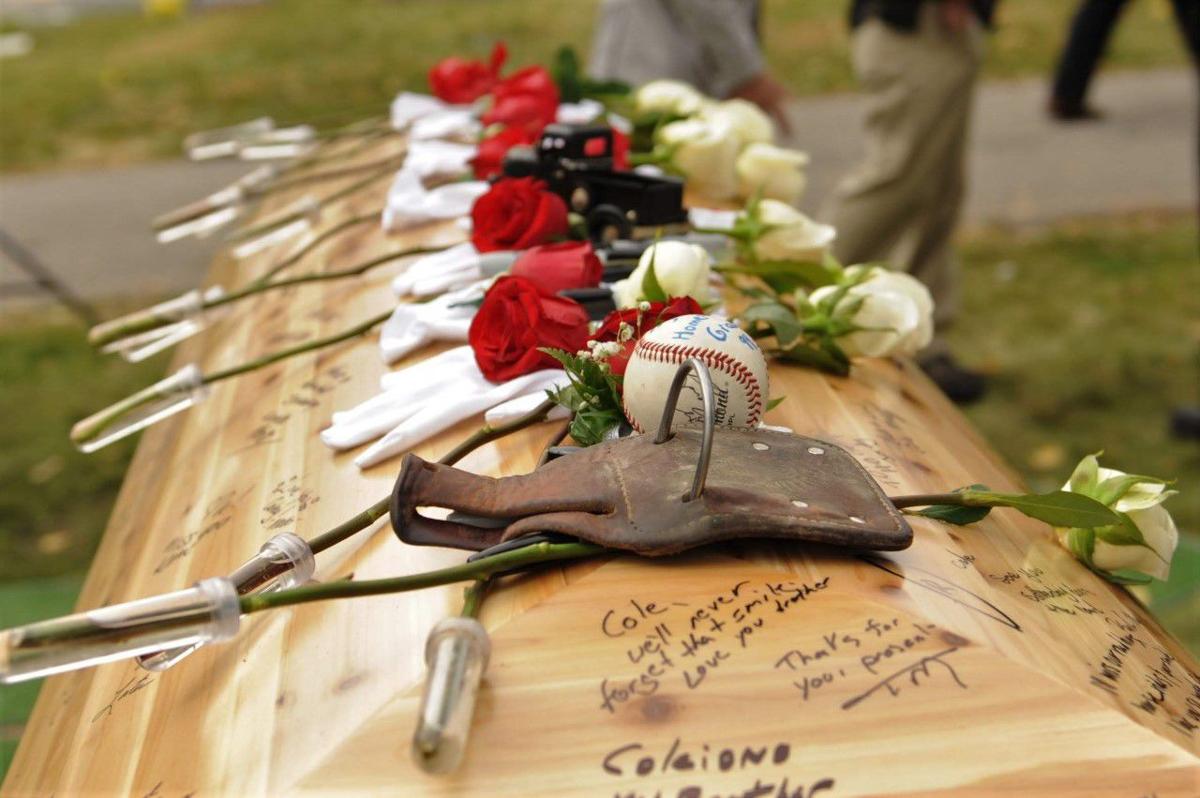 The casket of Cole Elwood Maughan is seen during funeral proceedings at the Wellsville Cemetery in 2018. According to Bankhead, the items on the casket, including a leather hammer holder and a power tool, owe to the fact that the 36-year-old was a baseball player and carpenter.

Tandie Nielsen Bankhead, who is a funeral photographer, poses for a portrait in Nyman Funeral Home.

The casket of Cole Elwood Maughan is seen during funeral proceedings at the Wellsville Cemetery in 2018. According to Bankhead, the items on the casket, including a leather hammer holder and a power tool, owe to the fact that the 36-year-old was a baseball player and carpenter.

When she was just a 1 year old, Hyrum native Tandie Nielsen Bankhead’s mother died suddenly of a blood clot to the brain.

Bankhead said she never really grieved for the loss of a parent — at least not until the birth of her own son. Bankhead remembers becoming emotional during moments of the day as she thought about her mother.

“Because that relationship is so important, and I just didn’t know any different,” she said.

Bankhead also set out to learn more about her mom, but the task soon proved difficult, if not impossible; people who knew her had passed or could not be reached.

“As I was seeking pictures of my mom — and there weren’t any — I had been told that there were people out of the building waiting for her viewing, but obviously, I don’t know who those people were,” said Bankhead, who recently opened her own photography studio on 17 ½ N. Main Street in Logan.

Bankhead noted there were no photos of the funeral, either. That’s when she got the idea to start doing “grief and memorial photography” for Cache Valley families.

“Being able to capture all of those people and all of those little, beautiful, tender mercies during that time is super important,” Bankhead said.

For a few years now, Bankhead has been photographing funerals, including most notably Lizzy Shelley’s. The 5-year-old made headlines after disappearing from her home earlier this year and was discovered dead a few days later in Logan.

Shelley’s death prompted an outpouring of community affection and grief for several days this past spring, and her funeral was covered by media throughout the state. Bankhead was there to photograph every moment of the proceedings, even the most intimate moments — ones the public was not permitted to see.

Bankhead reflects on the Shelley funeral as a highlight in her photographic career.

“I was thrilled to be able to do that,” she said.

Bankhead said many people don’t know they can have a professional photographer take pictures of funeral proceedings. Others think it’s all about taking pictures of the deceased person’s body, she added.

“For some families, that’s part of it,” Bankhead said. “But there’s so much more.”

She recalled some of the more intimate moments she’s witnessed at funerals as a photographer, including kids drawing pictures and putting them in the coffin with their loved one or kissing them.

“It’s their last goodbye and they won’t remember that,” Bankhead said. “But when they can have those images of it, as they become an adult and see all of that, they have such a better understanding of how loved their person was.”

More recently, Bankhead photographed the funeral of a man with four children under six years old.

“They won’t remember their dad, but those pictures will help them,” she said. “Details of his hands, dirt under his fingernails; a man’s hand. They’re so special. No one else would think about that — but I do.”

Moments like the ones Bankhead mentioned can be full of emotions for any family member, she said, which is why it is, in fact, all the more important for photographs to document a funeral.

“Your heart, brain and soul can’t process everything going on,” Bankhead wrote in an email. “After the service, when things slow down, it is so important and helpful to have the images to help with the grieving process.”

She added, “I love to give people the gift of tender moments, celebration of life and details your heart needs.”

Caleb Nyman, a funeral assistant with Nyman Funeral Home, said the funeral home has been working with Bankhead for more than a year. She has photographed Nyman’s spacious facility on 100 East in Logan and is the person funeral home officials refer families to if they want a funeral photographed.

But one thing Nyman has noticed more than anything is Bankhead’s ability to connect with grieving family members.

“She’s very compassionate to the family; she’s not just there to take pictures,” Nyman said. “She’ll give them a hug and wish them her condolences. She’s very sweet.”

Logan resident Keri Moya met Bankhead at a charity event the photographer was shooting. Little did they know their paths would cross again.

A week after the event, Moya’s mother died suddenly in a car accident, and Bankhead reached out to her through a mutual friend and offered to photograph the funeral.

“I thought it was exceptionally kind,” Moya said. “And to be honest, I wasn’t actually sure at first. It (funeral photography) was not something I had ever heard of, really.”

Moya consulted with her siblings on the idea.

“We are a very close family so if one of us was not comfortable with it, then I wouldn’t have done it,” Moya said. “But now, I am extremely glad we did.”

She said Bankhead was such a good photographer that family members forgot she was present during the proceedings.

She later learned Bankhead snapped a picture of her saying goodbye to her mother before closing the casket — a moment she truly appreciates.

“It’s priceless. It really is priceless,” said Moya, who became emotional when describing that moment in an interview.

Moya described the photo as a work of art.

When the family received more than 100 photos Bankhead took of the funeral, suddenly they realized “all these things she captured that are extremely special.”

Moya believes the photos, collectively, tell the story about the kind of person her mother was.

“It just goes to show you how loved she really was,” Moya said. “It’s obvious she was the most important person in all of our lives.”

Bankhead said she would “do anything for photos of my mom’s service.”

“I don’t want anyone to miss the chance to capture the service, especially with young parents or the loss of a child,” she wrote in an email. “If I won the lottery I would photograph every service I could.”