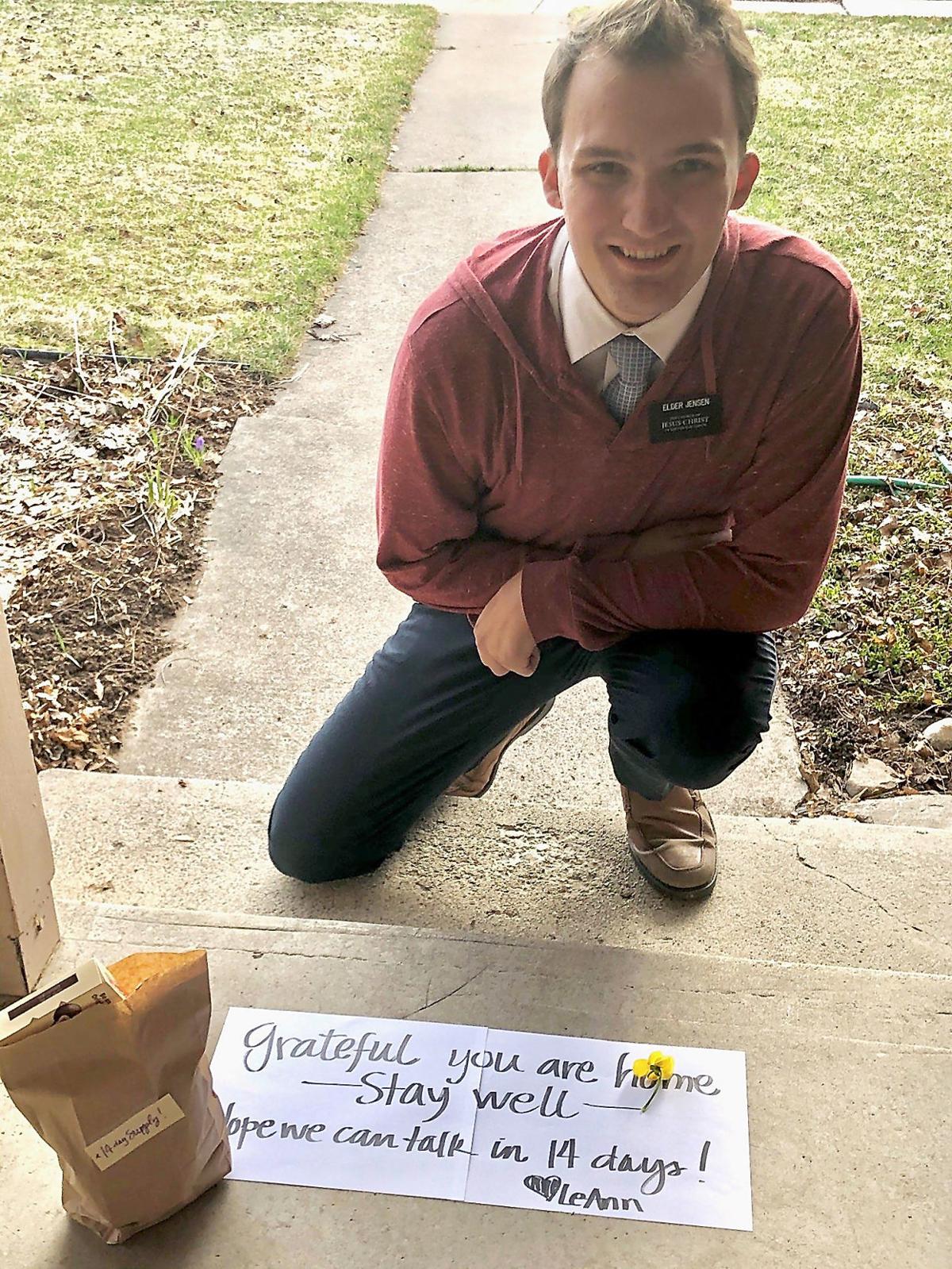 Missionary Ammon Jensen is greeted by a gift and a note from a neighbor after arriving home from the Phillippines. 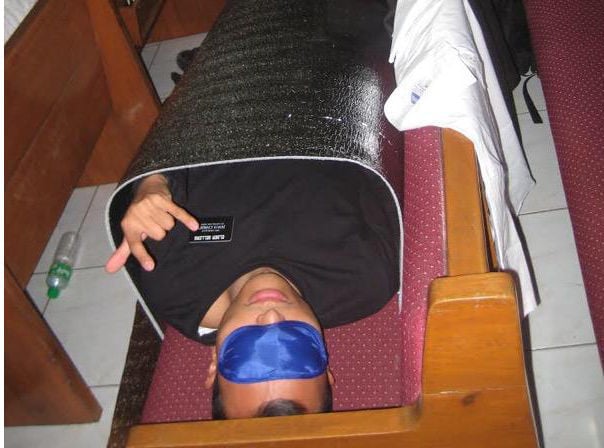 Ammon Jensen took this photo of a fellow missionary as their group got ready to sleep on pews in a church stake center in the Phillippine city of Bocolod.

Missionary Ammon Jensen is greeted by a gift and a note from a neighbor after arriving home from the Phillippines.

Ammon Jensen took this photo of a fellow missionary as their group got ready to sleep on pews in a church stake center in the Phillippine city of Bocolod.

Elder Ammon Jensen woke up on March 17 ready to start his normal responsibilities, but by that night, he and 120 other missionaries would be on their way out of the Philippines, racing against COVID-19 restrictions.

Despite the abruptness of the exodus — and at one point being detained nearly a day and a half on a bus that smelled of vomit — Jensen said it required the hard work of leaders of The Church of Jesus Christ of Latter-day Saints, prayers and the generosity of the Filipino people around them to make it off their island.

Jensen, a Logan native, was serving in the Cebu Phillippines Mission. News of COVID-19 started spreading to the missionaries near the beginning of February. Jensen said his stake president (the leader of several smaller church congregations called “wards”) banned shaking hands among the members. The first item that Jensen noticed began disappearing were face masks from pharmacies.

“We just heard that there was a virus in China,” Jensen said, “but when one case arrived in the Philippines, everyone started freaking out.”

But other than taking precautionary measures, not much changed in Jensen’s daily routine in the town of Bayawan, on Negros Island, where he served until Tuesday, March 17.

That morning, Jensen was instructed by his mission president to go buy two week’s worth of supplies in case the missionaries needed to be confined to their apartments. When Jensen returned from shopping at about 1:30 p.m., he received another text saying that all foreign missionaries were to be 100% packed up and ready to move “at a moment’s notice.”

At 3:30 p.m., Jensen received a third text saying, “This is not a drill. All foreigners are going home.”

“My companion was in denial and refused to pack until the 3:30 text, which is why we got out so late,” Jensen said. “We ended up getting the last bus that was going to San Carlos City.”

During the 8 hour overnight bus trip, Jensen said the reality of his leaving the Philippines began to sink in.

“I was really disappointed that I had to be leaving the area I was in because there was a lot of progress going on,” Jensen said, “and now the missionaries that are still there can’t work anyway because they were quarantined the day after we left.”

Early Wednesday morning, Jensen arrived in San Carlos City and joined more than 120 other missionaries from the island waiting to board the buses that would take them down to load a barge that had been chartered by the church. The plan was to ferry the missionaries to Cebu, where they would then fly to Manila to become part of more than 1,500 missionaries who would be flown from the Philippines to Salt Lake City.

After all-day petitions, permissions to embark and dock were denied, so the missionaries were put up in hotels, missionary apartments and any other safe accommodations that could be found for the night in San Carlos.

When negotiations again failed on Thursday morning, Plan B became imminent and missionaries were loaded on the buses and began the trek across Negros Island to the city of Bocolod, where Jensen believes Church leaders had gained permission to have the missionaries flown out of Bocolod to Manila. Jensen said having 120 missionaries all traveling by bus together probably made the small towns nervous “because it might look like six buses of coronavirus arriving in their towns.”

The missionaries were asked to keep the bus windows covered to avoid attracting attention that might make it harder for them to enter Bocolod, which was already on lockdown.

“The bus was air-conditioned,” Jensen said, “but it smelled terrible because a few of the missionaries threw up due to car sickness from the windows being closed and covered.”

Just outside city limits of Bocolod, the buses were stopped by police.

“I think we had permission to travel into Bocolod,” Jensen said, “but somehow that hadn’t been communicated to the police.”

The buses parked in a nearby sugarcane field while church leaders once again battled to negotiate entrance of the buses into the city. The missionaries were instructed to remain on the buses, limit exits to as few as possible, and to pray.

“There was one point on the buses where the Bocolod Mission President encouraged us to pray and study the scriptures,” Jensen said. “So I read about the exodus of Moses out of Egypt into Israel, hoping God would help us as well.”

Members of the church in Bocolod, who had heard of the missionarys’ plight, brought food to the buses. After nearly a day and a half, permission was finally granted on Friday afternoon for the buses to enter the city and the missionaries were allowed to stay in a local Church stake center building. Locals ultimately fed over 120 missionaries for five meals straight. Jensen said they brought them everything from McDonald’s to Filipino native dishes of rice and chicken.

“When we got to the stake center,” Jensen said, “obviously, they didn’t have mattresses and blankets for over 120 missionaries. So the local stake president who was helping us joked, ‘Brothers and sisters, as for sleeping arrangements, the Holy Ghost will keep you warm.’”

Jensen said that after entering Bocolod, everything else went smoothly.

“We ended up being one of the last groups of missionaries to get permission to leave the island but one of the first to arrive in Manila, which was nice,” Jensen said.

Jensen was flown to Manila on Saturday and put up in a Holiday Inn.

“I thought I’d died and gone to heaven,” Jensen said. “I think I spent 30 minutes in the shower.”

On Sunday, Jensen and the other 1,500 Filipino missionaries boarded on five Delta 777 commercial planes that the church had chartered and flew to Salt Lake City. He was the second missionary to set foot on American soil on Sunday, March 22.

Jensen was also one of the first 10 missionaries who entered the parking lot where parents were instructed to wait to pick up their missionaries, but what he and his family saw was very different than what was later reported in the media in regards to social distancing.

Jensen’s mother, Nancy Jensen, said that for the most part, everyone in the garage at the time they picked up Ammon was obeying the rules: two people were allowed to pick up each missionary, one should remain in the car while the other met their missionary as they exited the airport into the parking lot, and then they were to leave immediately.

“Everyone pretty much stayed, if not in their car, because some of them had driven quite a ways and needed to get out and stretch, they stayed pretty much in their parking spot,” Nancy Jensen said. “We definitely gave each other space, even though we were kind of talking to each other. … A lot of people had their trunks open, ready to put the stuff right in and take off.”

Ammon said, “When I got to the parking lot, there wasn’t really that big crowd. … The church had actually given very specific instructions and I guess people were later choosing to not follow them. We were long gone by time, though.”

Because Ammon Jensen had only been on his mission for a total of 8 ½ months, he will eventually be reassigned to somewhere else in the United States to continue his mission, but he said he will definitely miss the Filipino people.

“In the Filipino culture, you can talk to anybody,” Jensen said. “You can ask them all kinds of personal questions and you don’t have to worry about offending them. It’s a very, very open culture.”

Jensen also said that his mission experience so far has taught him to trust in God.

“There were a lot of times on my mission where maybe we didn’t have a lot of people we were teaching or where we weren’t sure we were going to get off the island,” Jensen said, “but I learned to trust that things work out.