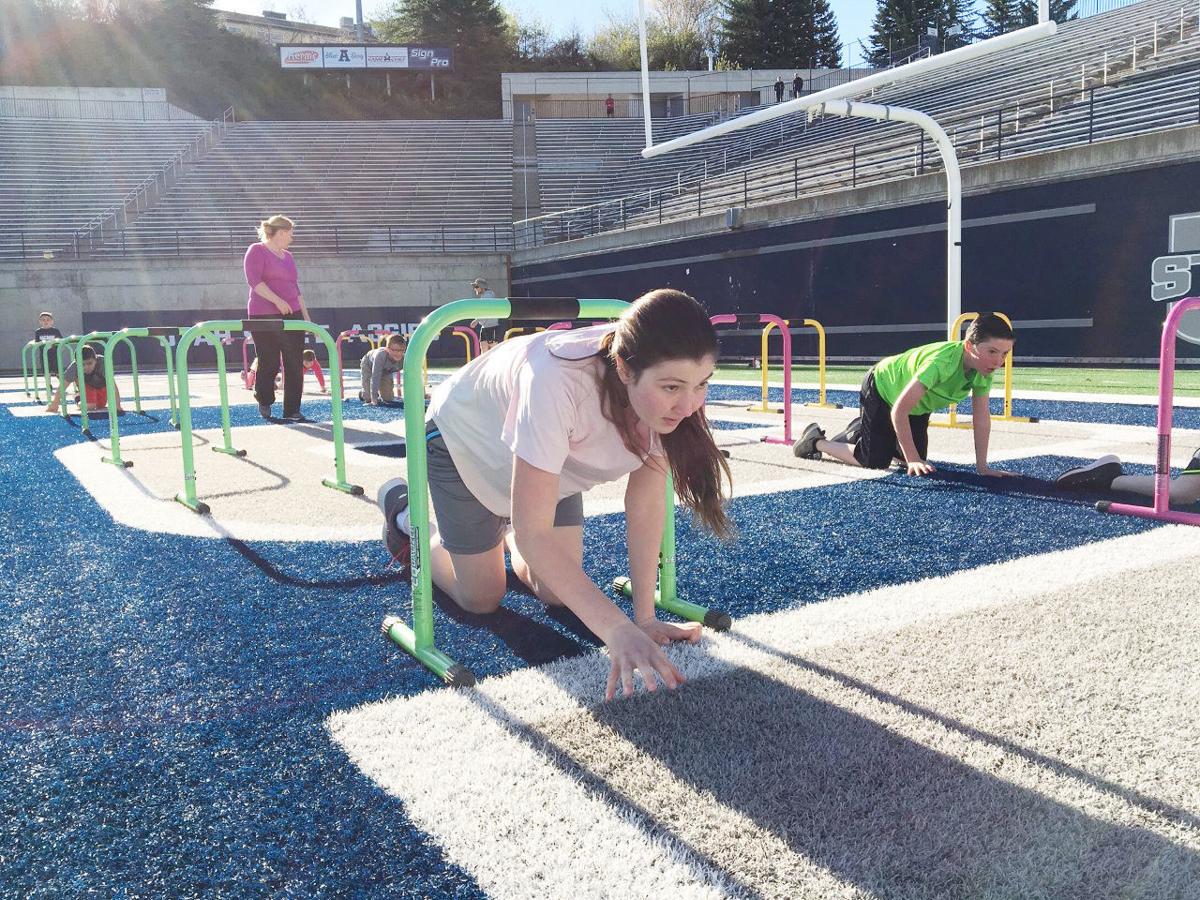 Julia, 12, does an Army crawl with her brother, Lance, 10, while participating in the Aggie Obstacle Courtse on Saturday at Utah State University’s Maverik Stadium. 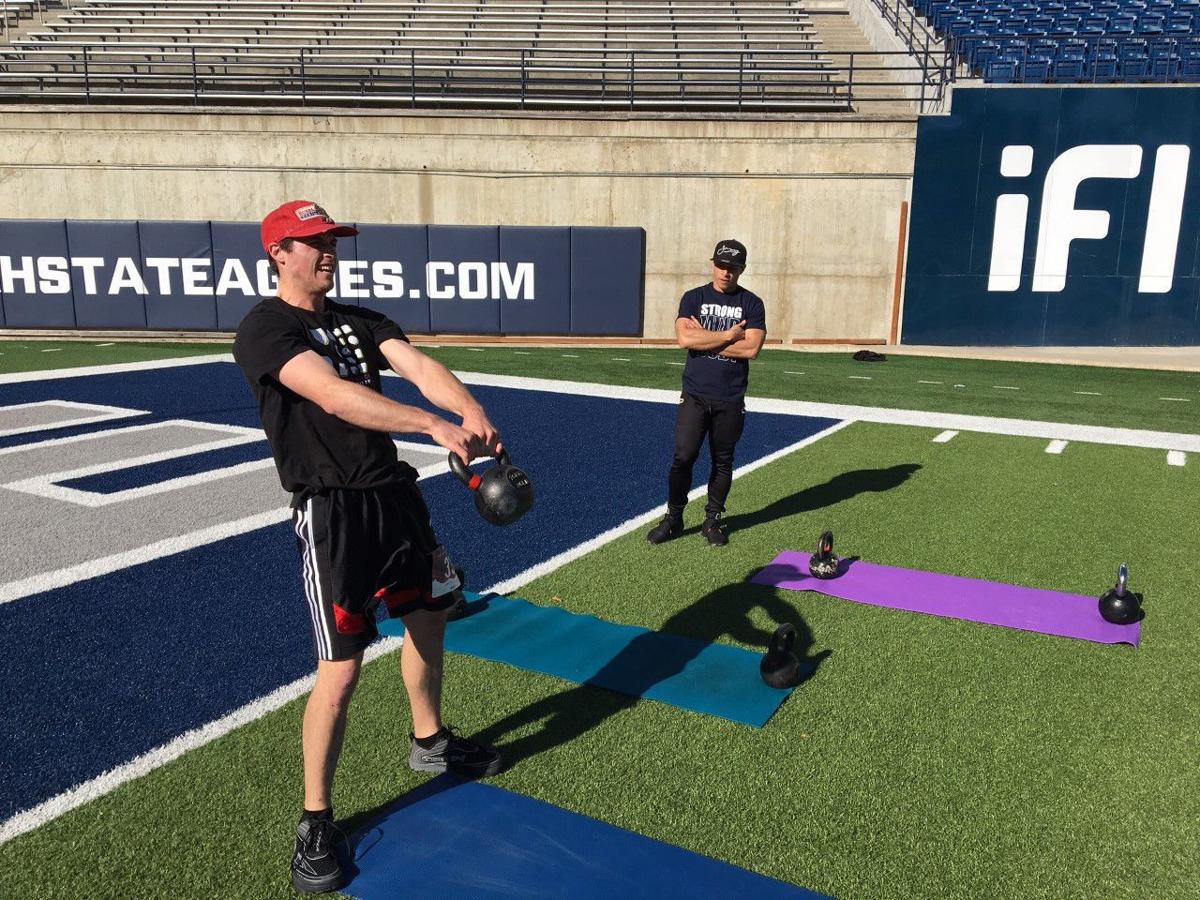 Julia, 12, does an Army crawl with her brother, Lance, 10, while participating in the Aggie Obstacle Courtse on Saturday at Utah State University’s Maverik Stadium.

Julia, 12, of Logan, tested her physical endurance on Saturday at Utah State University’s Maverik Stadium as she crawled on her hands and knees under steel hurdles, completed pushups and kicked a football into a goal post.

When she was done running the course that encompassed the perimeter of the field, she was awarded a gold medal that had a running shoe with a wing on the front and engraved with the term “USU Aggie OCR” on the back.

“I feel pretty good,” she said, still out of breath from the workout. “I thought it was really very fun.”

Julia was just one of many community members who turned out for the first-ever Aggie Obstacle Course event, sponsored by USU Campus Recreation and several local businesses. The course, both on and off Merlin Olsen field, included more than 15 obstacles.

“You may have done a 5K before; you may have lifted weights or done a CrossFit competition, but this is really totally different,” said Megan Flanagan, USU graduate assistant of fitness and wellness, in an interview with The Herald Journal.

Asked about the initial idea for the event, Flanagan noted she is an “avid obstacle course racer” and said many students appear interested in strength and conditioning courses and activities.

“They’re interested in lifting and running, and this combines both elements into an obstacle race,” she said.

Emmy Richards, assistant director of fitness, wellness and aquatics, said she worked with Flanagan to “refresh” the events offered in Cache Valley.

“I find it as a way to offer something different,” she said, “but also … coming out of our silos of Logan city and USU and coming together and having an opportunity for us all to recreate and have fun as a group.”

Richards emphasized the obstacle course was not a mud race — and not just because the venue has a turf ground.

It's “less intimidating,” she said. “For people who don’t want to get dirty, this is an option for them.”

Flanagan said that while admission to most obstacle course races can run into the hundreds of dollars, USU’s event on Saturday was meant to be an affordable opportunity for everyone.

Flanagan also said Maverik Stadium was an “awesome” place to host the Aggie Obstacle Course, noting that many of today’s Spartan Races take place in venues like it.

Julia’s brother, Lance, 10, also took part in the obstacle course. He said he had never been to USU’s football stadium before but completes a workout regimen every morning with his father, so Saturday’s event was not a completely new concept to him.

Michael Hoffman, a USU student, was among the adults who tested their endurance on Saturday. He said he felt a little queasy after completing the course. One of the activities included carrying a medicine ball up and down the concrete steps of the stadium.

Ryan Larsen, an employee at TTM Technologies, a sponsor of the Aggie Obstacle Course, competed in the adult version of the event, which included long jumps, kettle bell swings, tire flips and medicine ball carrying — things not included in the kids’ course.

Larsen noted he is a USU alumnus and hoped bringing his kids to the obstacle course motivated them to pursue higher education. But more than that, he just enjoyed watching his kids go through the activities the course had to offer.

“I love that they were excited about coming and doing it,” Larsen said. “They can face challenges in life and learn to overcome hard things — I think that’s what … races like this help them teach them.”

Richards and Flanagan both expressed hope that people who participated in the obstacle course came away with a surer sense of their own physical abilities.

“I think the biggest thing is, you can do it,” Richards said. “You can be successful.”

Flanagan said, “I hope that it helps people realize all that they’re capable of, seeing that anyone can be an athlete. I think there’s an athlete within all of us.”