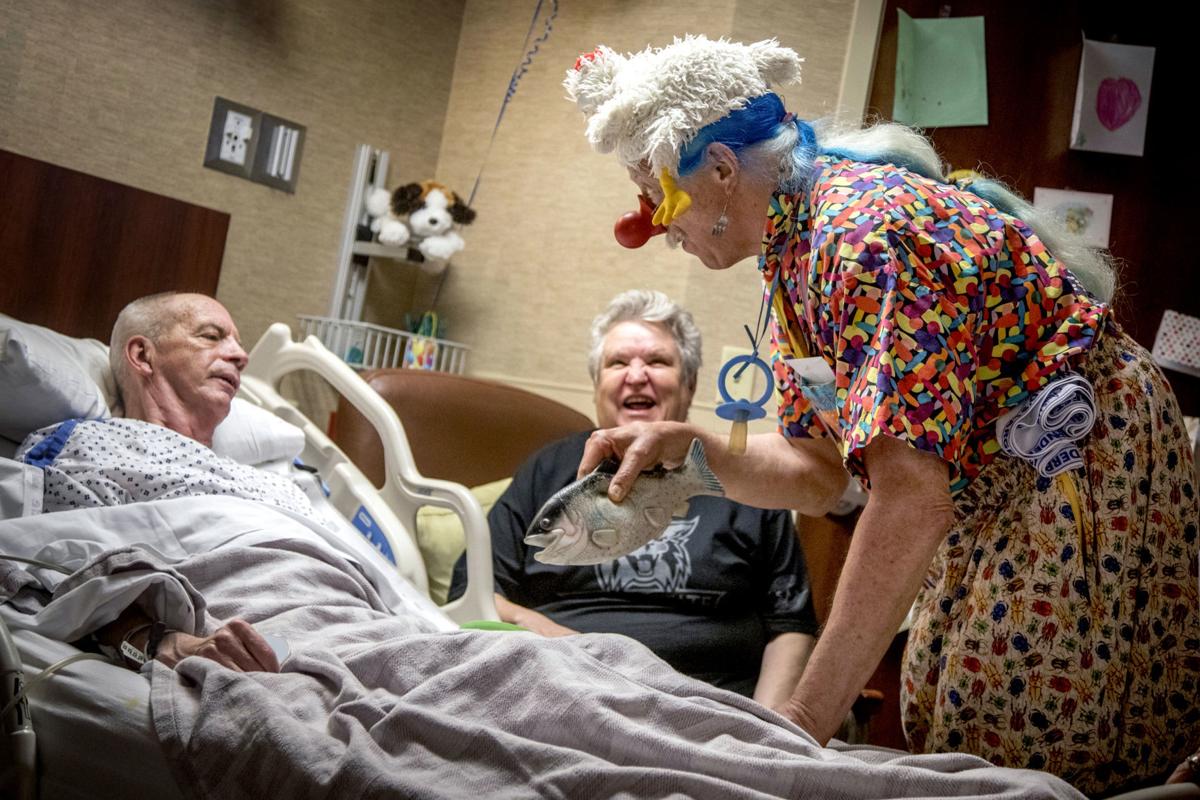 Patch Adams, right, visits with patient Kim Call, left, and his wife, Nancy Call, during a visit to Ogden Regional Medical Center in Ogden, Utah. Adams is a physician, clown and activist who made a name for himself nationally by working to include laughter and joy into medical care. 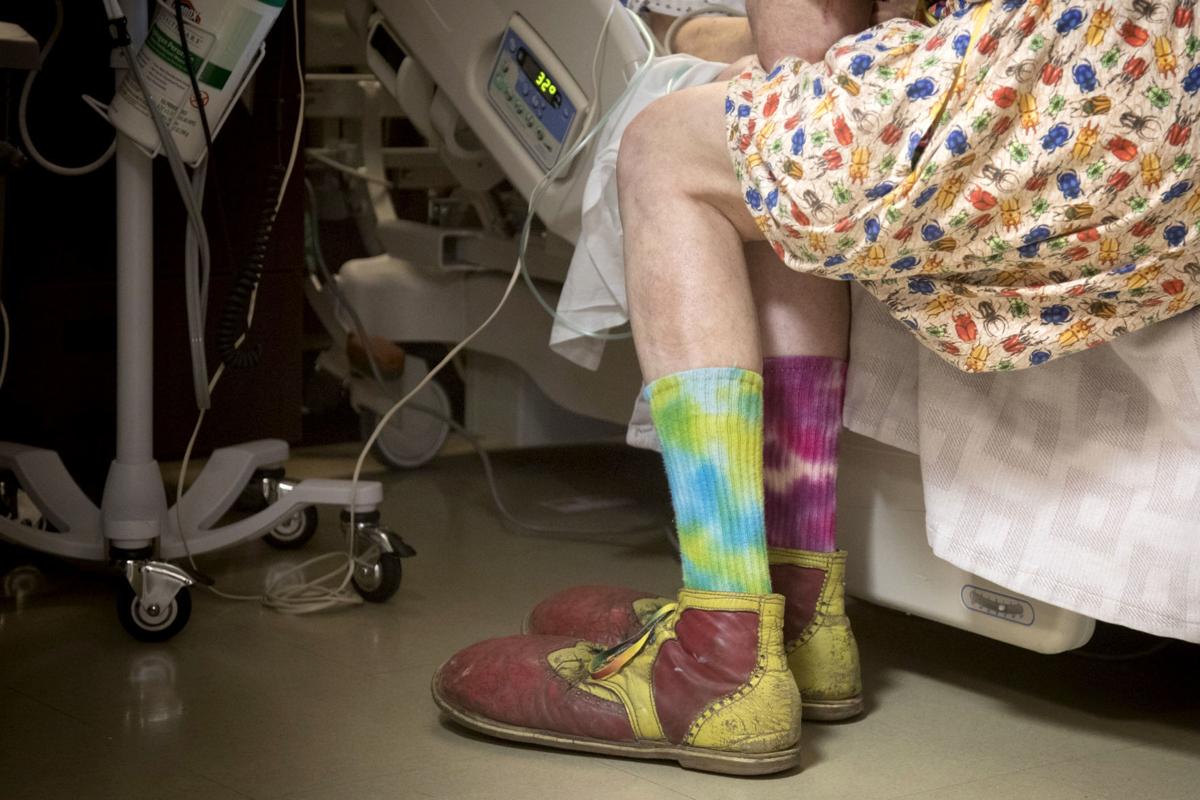 Patch Adams visits with a patient at the Ogden Regional Medical Center in Ogden, Utah. 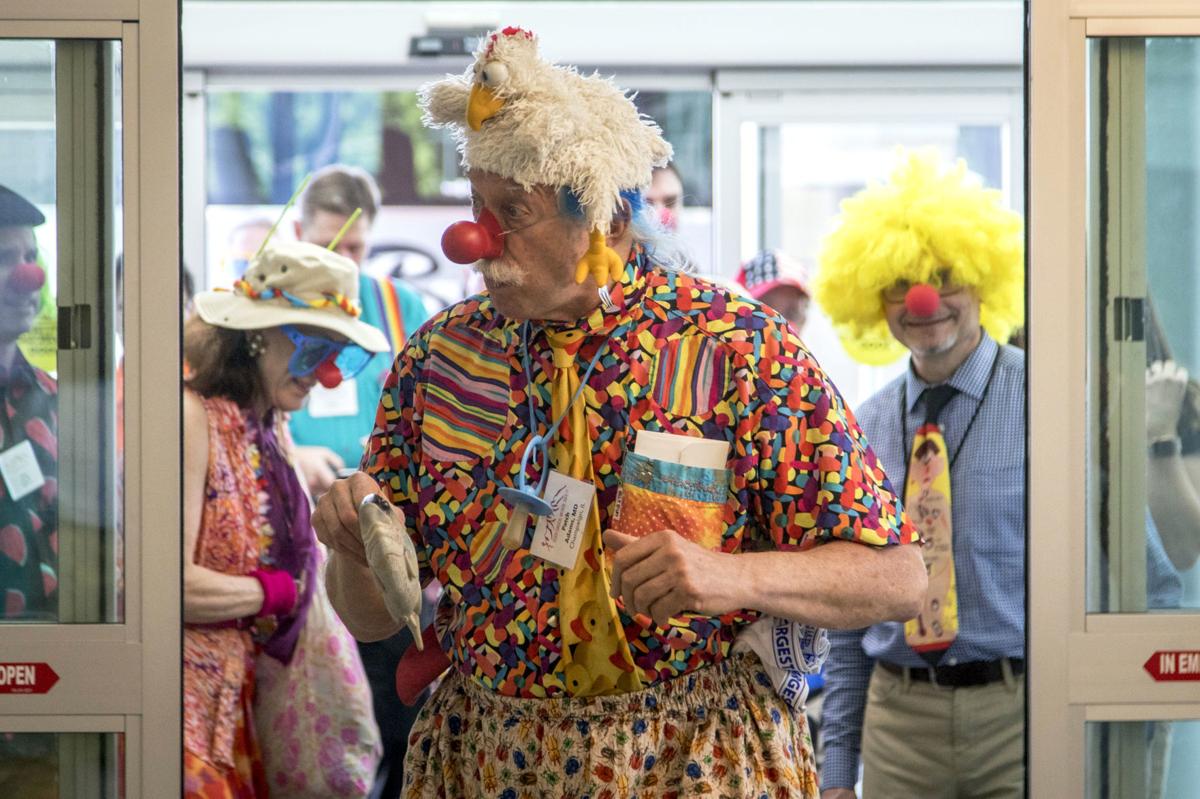 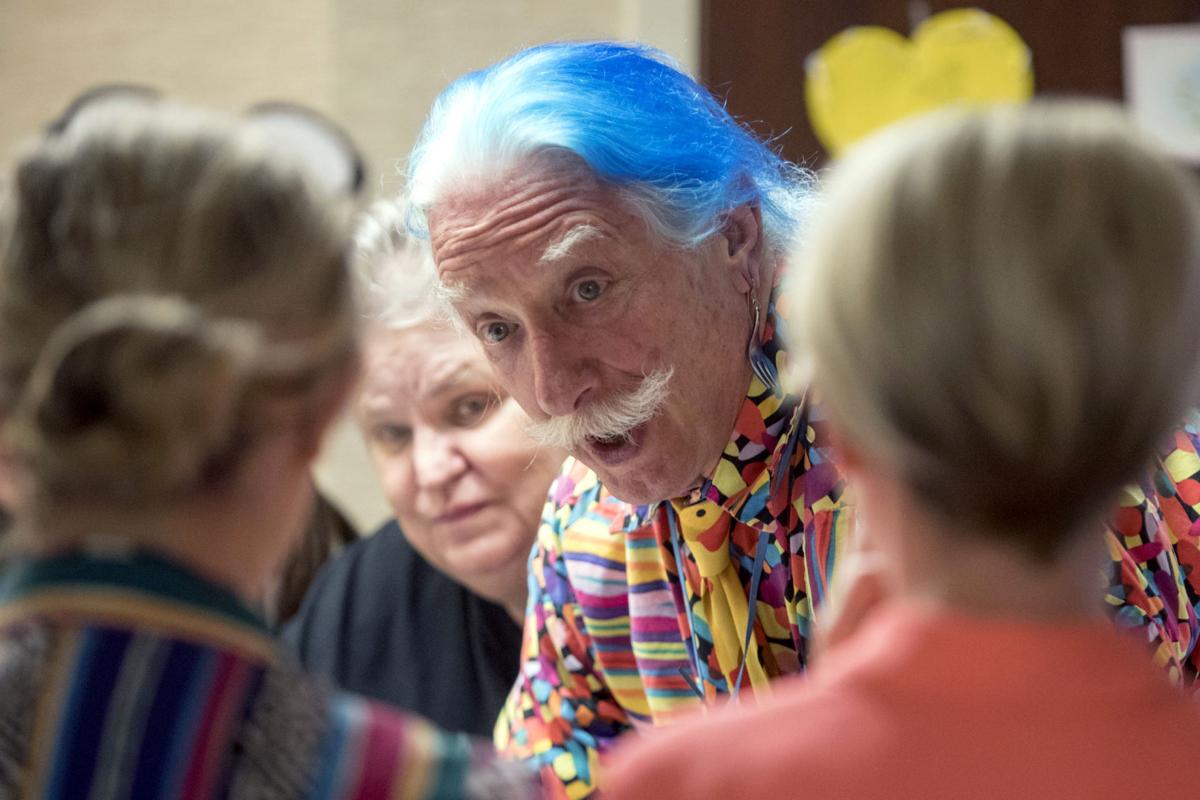 Patch Adams, right, visits with patient Kim Call, left, and his wife, Nancy Call, during a visit to Ogden Regional Medical Center in Ogden, Utah. Adams is a physician, clown and activist who made a name for himself nationally by working to include laughter and joy into medical care.

Patch Adams visits with a patient at the Ogden Regional Medical Center in Ogden, Utah.

ODGEN, Utah (AP) — If anybody needed cheering up, it was Kim Call.

The Syracuse man has been in the hospital since April 4, with a colon so twisted in knots that it required three surgeries over the past six weeks. He’d just had his feeding tube removed, and the hope among doctors and family was that Call’s long ordeal might finally be turning a corner.

So when Dr. Hunter Adams led patient rounds at Ogden Regional Medical Center during the day, his prescription for Call was just what the doctor ordered — a red nose and big, floppy shoes.

Dr. Adams, who goes by the nickname Patch Adams, was featured in the 1998 film by the same name, in which Robin Williams played the zany medico. Adams believes that laughter, joy and creativity are integral to the healing process. The 72-year-old describes himself as a medical doctor, clown and social activist. He’s devoted the better part of three decades trying to change America’s health care system — a system he describes as “expensive and elitist.”

Adams founded — and funded — The Gesundheit! Institute, a nonprofit organization that works toward building and sustaining the first free hospital in the United States. He’s written two books and leads a half-dozen clown trips each year, bringing humor and health care to poor and war-torn regions of the world.

Call was glad for the visit.

“He has a way of healing through laughter,” Call said. “If you’re feeling bad, remember that happened in past. It’s a new day, move on.”

Call’s wife, Nancy, says she needed the doctor’s medicine as much as her husband.

“I loved it,” she said of Adams’ bedside visit. “It’s what I needed to cheer me up as a caregiver to my husband. This has been hard on me, too.”

Adams was in town to speak at the 73rd annual Ogden Surgical-Medical Society conference in May. Each year, the president of the society gets to choose the theme of the conference. This year, that duty fell to Dr. Kurt E. Rifleman, a family practice doctor with the Midtown Community Health Center in Ogden.

Rifleman chose the theme “The Joy of Medicine,” and Dr. Mark Housley, a colleague at the center, suggested bringing in Patch Adams to speak at the conference.

Adams agreed to speak and to conduct rounds at Ogden Regional on one condition: The doctors who accompanied him to visit patients wear bright colors and are willing to “get outside their comfort zones,” according to Rifleman.

Which is how a busload of doctors — wearing red noses, cartoonishly oversized sunglasses and name tags like “Dr. Ben Dover, evil proctologist” — ended up spreading a little joy at the hospital.

Housley said most doctors chose the medical field in order to help people.

“But we forget about that as we get in the trenches,” he said. “So it’s nice to recharge our batteries and remember that the goal is caring for people.”

Although media showed up to the event, Adams was protective of the hospital’s patients.

“No cameras in the room,” Adams commanded. “It’s not a spectacle, these are patients.”

Spectacle indeed. It was difficult to take this traveling circus seriously as Adams showed Utah doctors how to channel their silly side.

Dr. Matthew Weeks, with Intermountain North Ogden Clinic, was one of the doctors there to learn from the master. Unfortunately, he said, reality doesn’t always allow what Adams was advocating.

“It would be great to spend four hours with a patient, but we don’t always have that luxury,” Weeks said.

Weeks said the message he got from Adams was that physicians need to “love and care more,” practicing the intangibles of the healing arts.

“His humor — holding people, touching people, caring — is just as much an art,” he said. “Seeing people like Patch and listening to them, it reminds us why we went into medicine in the first place. To help people.”

Rifleman said the health care system can sometimes cause doctors to become jaded, and Adams encouraged doctors to be more compassionate and caring for patients. But it doesn’t always have to be a “clown” approach, according to Rifleman.

Dr. Valeria Dias, a second-year resident, said she’s wanted to be a doctor since she was 5 years old. She went into medicine “for the cliche reason: to help people.”

Dias remembers watching the “Patch Adams” movie in high school, and she thinks he has the right idea to help both doctors and patients.

“If we remembered about the caring part of seeing patients, I think we’d see much lower levels of physician burnout and suicides,” she said. “We can still be the doctor we want to be — it will just take more work, and less greed.”

Craig Bielik, marketing director at Ogden Regional Medical Center, said Adams has a “huge reputation” for compassionate care and for being passionate about what he does.

“Our hope is that every health care professional could share those traits,” Bielik said.

“He certainly has his own set of ideas, and a lot of those are not necessarily in the mainstream,” he said.

Weinfeld said Adams made some folks uncomfortable by challenging the status quo — particularly on subjects like malpractice insurance and mental illness.

“He’s very funny, and clearly compassionate, but there were some gasps at times,” Weinfeld said. “I think his mantra has been healing with compassion and humor, and any of our patients would benefit with a little more of that. What he does is complementary to what we do.”