Nene geese crowd around Doug Eames as he lies in his backyard in Logan on Wednesday. 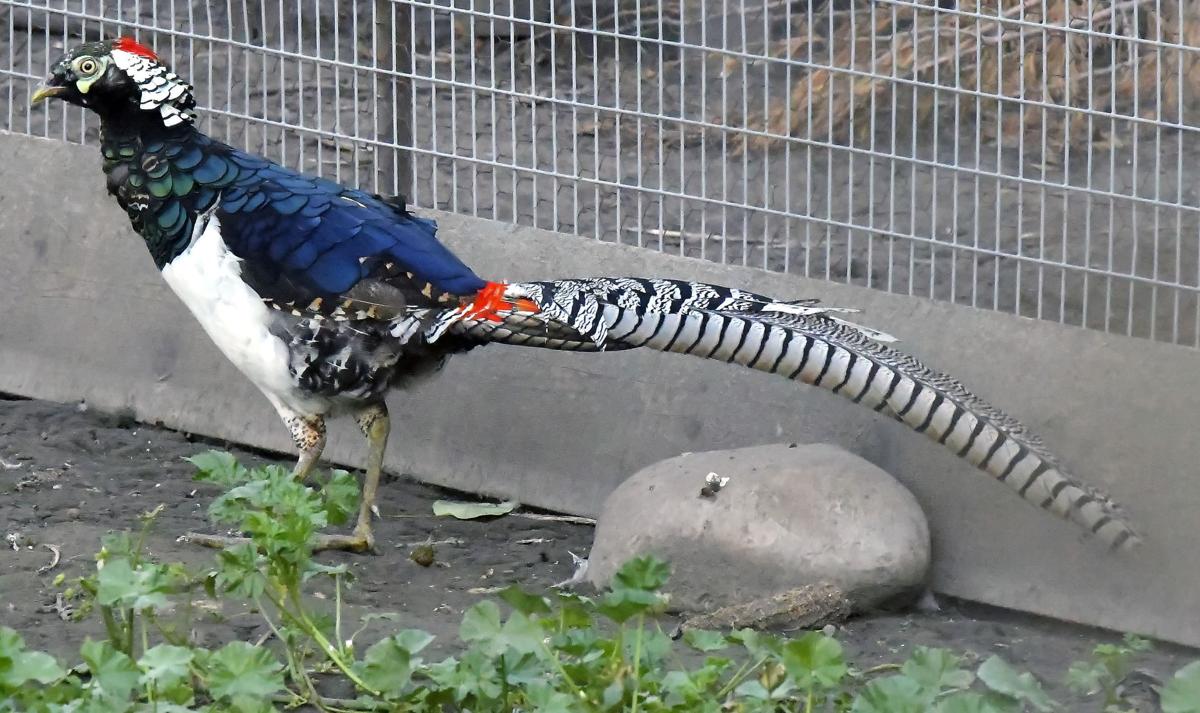 An Amherst pheasant wanders in the yard of the home of Doug and Edna Eames on Wednesday in Logan. 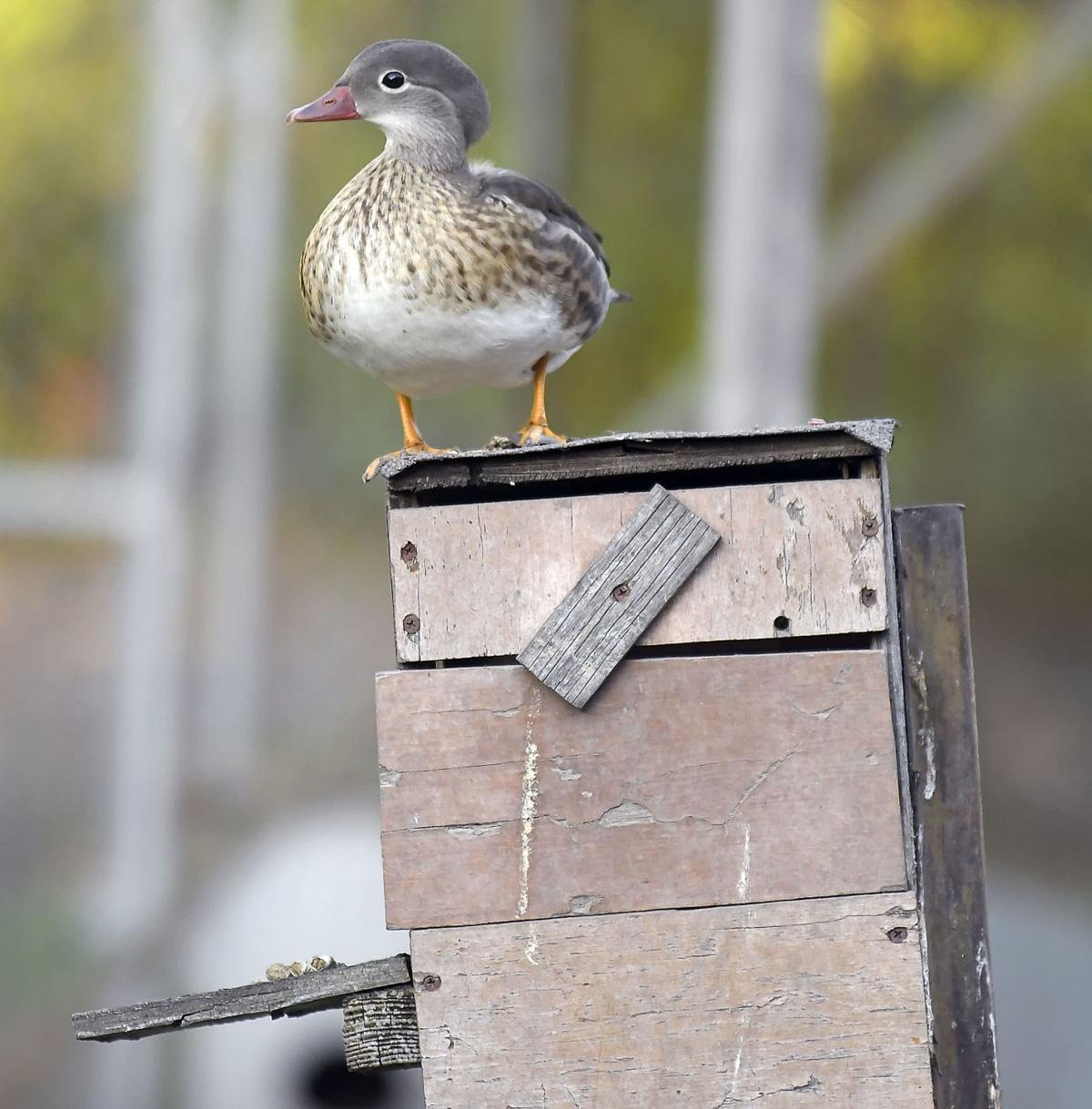 A Mandarin duck sits on top of a box at the home of Doug and Edna Eames on Wednesday in Logan.

Nene geese crowd around Doug Eames as he lies in his backyard in Logan on Wednesday.

An Amherst pheasant wanders in the yard of the home of Doug and Edna Eames on Wednesday in Logan.

A Mandarin duck sits on top of a box at the home of Doug and Edna Eames on Wednesday in Logan.

That’s just a small part of the population in the five-acre bird sanctuary maintained by life-long Logan resident Doug Eames.

Motorists driving by the Park Avenue property of Eames and his wife, Edna, would never know what sits behind the neatly kept brick house and front yard. But step off the back deck and you enter a world of lush greenery, gurgling fountains, fish-filled ponds and dozens of varieties of rare and exotic fowl. It’s as if you’ve walked through a portal to a different realm, far from the concerns of daily life and one of Eames’ least-favorite things: politics.

The 87-year-old Eames estimates he currently has 400 to 500 birds, but in years past he’s kept and cared for many more varieties of fowl and many more at a time. That was before Edna made him scale back due to advancing age. Also gone are the incubators used in many breeding projects Eames conducted as a widely known private bird keeper and collector.

Perhaps the most notable of those projects involved threatened trumpeter swans and a deal with the Walt Disney Company that led Eames to becoming one of the first people to raise these giant, graceful birds in captivity.

In the 1970s, Eames made the acquaintance of Bob Bise, an animal handler who kept big cats and other wild creatures used in Disney films, and one day Bise asked Eames if he would hatch some trumpeter swan eggs for the company. At that time, the swans had dwindled dramatically in number and were being considered for inclusion on the federal Endangered Species List.

“I said ‘Gad, I don’t want to monkey with them if they’re talking about putting them on the endangered list. I don’t think you can get a permit for that,’” Eames recalls telling Bise. “Well, three days later, being Disney of course, they got the permit and sent me six eggs down.”

Eames was able to hatch five of the baby swans. He kept the breeder pair and one of the hatchlings that was “imprinted” to his voice for the purposes of show presentations. “I know that sounds silly, talking to them in the egg, but they wanted one of them imprinted so they could do different stuff with him, and we raised him here,” Eames said. “He appeared on a show with Marie Osmond and some other things Disney was involved with.”

Eames no longer has any trumpeter swans, but one of the first things visitors see at the refuge is a pair of similarly large and even more rare black-necked swans elegantly gliding through a pond shared by a variety of other waterfowl. These include strikingly colorful wood ducks and Mandarin ducks, plus red-crested pochards, pin-tailed ducks and American ruddy ducks, known for their eye-catching blue beaks at this time of year.

Go farther back on the property and you encounter a sizable gaggle of bar-headed geese, one of the world’s highest flying avian species, and two types of exotic pheasants that could be confused for peacocks. (Eames used to have every variety of pheasant known.)

Eames’ pride and joy, however, is a group of about 20 less flashy fowl from Hawaii known as nene geese (pronounced nay-nay). Not only are they extremely rare but they’re uncommonly friendly creatures. Every evening at feeding time, Eames sits or reclines in the grass and they gather around him in a ritual that includes preening the hair on his arms and head. When a Herald Journal photographer visited this week to capture images of Eames and his birds, one of the nenes came up and stuck his beak in the camera lens.

Found only in Hawaii, the once plentiful nene geese dwindled to only 39 birds in the mid-20th century due to the introduction of predators such as the mongoose, pigs and cats. In an effort to prevent extinction, about half of the remaining birds were put under the care of an English wildlife rescue organization, and the population has slowly rebounded to about 2,500, with most of the birds in zoos and private collections.

“Nenes are so tame, I think that’s why they almost got wiped out,” Eames speculated.

Of course, the geese respond to their bird-loving Logan caretaker in an especially tame and intimate way — which is no surprise considering Eames’ background in collecting and interacting with birds. He seems born for the activity.

When he was only seven years old, Eames spent many hours helping out at the Tracy Aviary in Salt Lake City, where his parents would leave him while shopping and visiting relatives. “I was always more interested in being dropped off out there than doing what everyone else was doing,” Eames recalled. “I got to know the old boy who was curator at the aviary real good, Cal Wilson. He didn’t have much help, and soon I was staying there six or eight hours a trip.”

About that time, Eames started raising his own pigeons, a popular pastime for boys in the 1930s and ’40s. These weren’t just any pigeons but “fancy” breeds with colorful and flamboyant plumage, and the youngsters of those days collected the different varieties in a manner that might be compared to Pokemon cards a half century later.

“His mother told me he always wanted birds for Christmas, not toys,” Edna noted in a recent interview and with the couple, and Doug acknowledges it did become an obsession not only for him but several other members of a local youth pigeon club that had grown to 75 strong.

“At that time we were either with our pigeons or we were out in the hay fields or beet fields always working right after school so we could get enough money to buy a few more pigeons,” Eames said.

But while others eventually abandoned the hobby, this kid kept it going into adulthood and gradually added more types of birds to his collection. After becoming the parks director for the city of Logan in the 1960s, he bought the property on Park Avenue and started transforming it from a barren, junk-filled vacant lot into what it is today.

And now for a couple of trivia questions.

Can you guess who started the Willow Park Zoo in Logan, which began as an aviary? Answer: It was Doug Eames during his tenure as parks director.

And can you guess what type of birds Doug and Edna Eames have had carved on their pre-purchased and placed gravestones at the Logan Cemetery? That’s right, nene geese.

The couple wonders and worries what will happen to their beloved aviary when they’re gone. They have two grown grandsons who like to help out, but the men are busy with their own lives, and taking care of the place is a big job that has required hours of daily attention by Doug over the years while Edna has focused on home and garden upkeep.

The collection could go to another waterfowl and pheasant raiser, but they have become a dying breed themselves in recent years, so Eames has reached out to zoos across the country

“I want to just make sure they go to a good home when I go,” he said.

As one walks through the bird sanctuary with Doug Eames and his aforementioned dog, Tacoma, it seems only a distant concern. Maintaining the birds and the property has kept him fit, and his unwavering enthusiasm for the hobby has kept a sparkle in his eye. Besides, it’s too peaceful here among the mature trees, trickling water, occasional quacks and flapping of wings to think much beyond the moment.