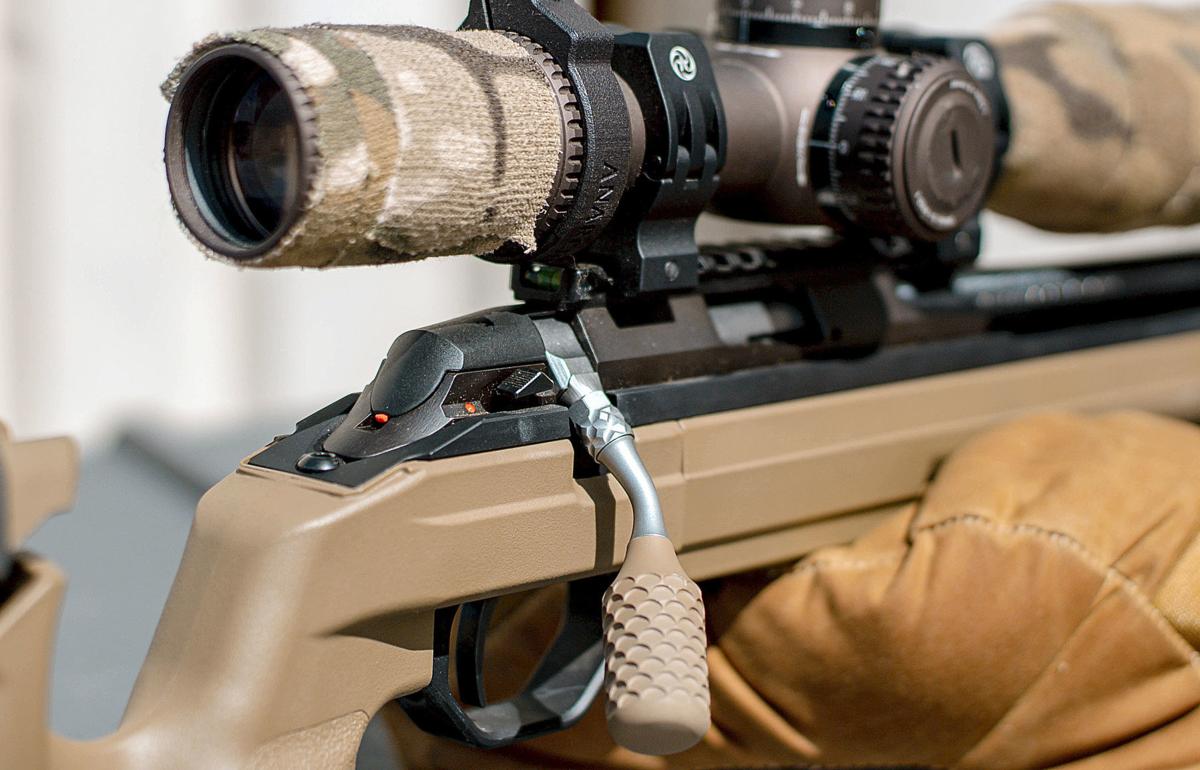 Local company Anarchy Outdoors just came up with the Threaded Adjustable Bolt Handle for the Tikka T1X and the Bergara B14 Rimfire rifles, which had never before been done.

Local company Anarchy Outdoors just came up with the Threaded Adjustable Bolt Handle for the Tikka T1X and the Bergara B14 Rimfire rifles, which had never before been done.

Looking to be on the cutting edge of precision rifle components and high-performance firearm accessories, a local company has come up with a first-of-its-kind product.

Based in North Logan, Anarchy Outdoors recently introduced a significant improvement in bolt action ergonomics with the development of its new Threaded Adjustable Bolt Handle for the Tikka T1X and the Bergara B14 Rimfire. The company is working on developing this for other models of rifles too.

Aaron Gines, who is the chief product officer and one of the co-founders of Anarchy Outdoors, explained that no two rifle shooters are exactly alike. How you use a bolt action may vary slightly because of stature, hand size or technique. The new Threaded Adjustable Bolt Handle lets the shooter adjust how much the bolt handle is swept rearward which can have a significant effect on the functionality.

“We are a firearms manufacturer of uncommon items,” Gines said. “We were looking at the market and we knew we wanted to make a bolt handle for the Tikka T1X. In the process, one of our competitors beat us to it.”

But that didn’t stop Anarchy Outdoors.

Originally there was just one way to attach the handle which began at factories. A competitor out of Australia came up with a second way. Now there are three.

“We didn’t want to copy our competitor’s design, so we started playing with different ideas,” Gines said. “We came up with the self-timing locking nut, which we have used — never in design — but in other similar products. Muzzle breaks for rifles use the same technology in a self-timing nut. It’s technology that has been used before, but we took it an applied it in a completely novel idea on the Tikka T1X and the Bergara B14.

“We came up with it by trying to be different than one of our competitors.”

According to Kurt Hansen, the president and other co-founder of the company, a big part of maximizing the accuracy and functionality of any rifle system is properly fitting it to the shooter. The Threaded Adjustable Bolt Handle addresses the fine motor skills of how the shooter works the action, enabling precise placement of where handle and bolt knob are located in relation to the shooter’s hand. The sweep of the handle can be adjusted by rotation so it is closer to the grip and rifle or further away.

Gines said that fine tuning the location of the bolt knob can have a dramatic effect on the overall feel of the rifle when working the bolt action. He said hand size plays a big part as well. Installation and adjustment are simple, and once the handle is tuned to the user’s preference, simply lock it in place with the knurled locking collar.

“What it allows you to do is get it exactly where you want it,” Gines said. “When you are shooting a precision rifle or even a precision .22, when you come off the trigger you want to extend your index finger straight, come up and back in one motion. ... You can tweak it to where you want it depending on the size of your hands.”

Customers have asked Anarchy Outdoors to look into doing this for some other popular rifles with bolt handles. Gines said they will do that in the future

This recent addition is just one of hundreds of accessories Anarchy Outdoors carries. The Cache Valley company was founded nearly five years ago by like-minded friends that enjoyed long-range shooting.

“We liked shooting at targets, but we have a lot of customers that are hunters,” Hansen said. “We started with the guns we owned and some things we didn’t like with the factory set up and accessories that didn’t exist. We started with different bolt handles. Manufactures make thousands of the same thing, but everyone likes to customize. We were no different.”

Hansen and Gines began by making the different bolt handles, then scope bases.

“We really try to make our own rifles better,” Hansen said. “Now, with our following, our customers have requests. We look into it and see if there is a big enough demand. We operate in a niche industry, but if it’s big enough, we will go after that rifle and work our way through it with everything we would like to do and change, then move onto the next one.”

The business is located in North Logan because as Hansen explained, “that’s where our day jobs were.” But now Anarchy Outdoors has six employees and the business continues to grow.

“Kurt is a serial entrepreneur,” Gines said. “We are high school friends and he called me out of the blue one day and said he wanted to start a business and wanted to put up a website and do a drop ship.”

The alums of Sky View High School and Utah State University investigated how to set up an online business. Hansen and Gines both have business degrees, as well as masters in business.

“We discovered it wasn’t as easy as you think,” Gines said. “We got it up and going and it was okay, but then we discovered a love of precision rifle shooting. We started trying to find accessories for our guns. We fell into an awesome arrangement with a manufacture"

Gines said that narrowing their business cleared a path forward.

"We shifted from drop shipping outdoors stuff to a full blown gun industry, very niche market," he said. "We quickly discovered that unless you are Walmart or Amazon, you have to have your own special niche. That’s what we have done. We go after firearms that are extremely well made, easy to accessorize and have zero after-mark following.”

“We are very much a leader in the niche rifle community,” Gines said. “We are starting to expand our lineup dramatically.”

Where did the company name come from?

“The word anarchy means complete and total freedom in the outdoors,” Gines said. “We took a page out of Amazon and picked a word that starts with A so it is high in the alphabet. That’s how it came about. ... We aren’t just tied to the gun industry.”

At their location in North Logan, there is a designer, sales people and marketing. There is no manufacturing there — that takes place at some “job shops” in Utah and Idaho.

Their clientele is from all over the world.

“Not even a half a percent of our business is local to Cache Valley,” Gines said. “Most of our business is from Texas and California, but we sell all over the world. We are in Brownells, which is the worlds largest retailer of gun parts. We are in Optics Planet. We also have 15 to 20 small dealers that sell our products. We also have our website. ... We sell a lot to Canada, England, Australia.”

Hansen said they started five years ago on Facebook with different groups. Now 75 percent of their customers find them through searches on the internet.

Anarchy Outdoors sponsors a shooting team that competes in leagues and matches across the country. The company has even hosted some competitions.

What is in the future for Anarchy Outdoors?

“We have an endless road map,” Hansen said. “We have a staff meeting once a week and one agenda item is the product road map. We have two years worth of products on that product road map. ... We have lots of platforms with rifle accessories but would also like to get into other industries that aren’t just long-range shooting. We just hired another drawer so we could get moving faster.”

A more formal store front is planned in the future as the business grows. Gines hinted about the possibility of another gun range “showing up in the valley” and joked, “You never know what we are up to.”