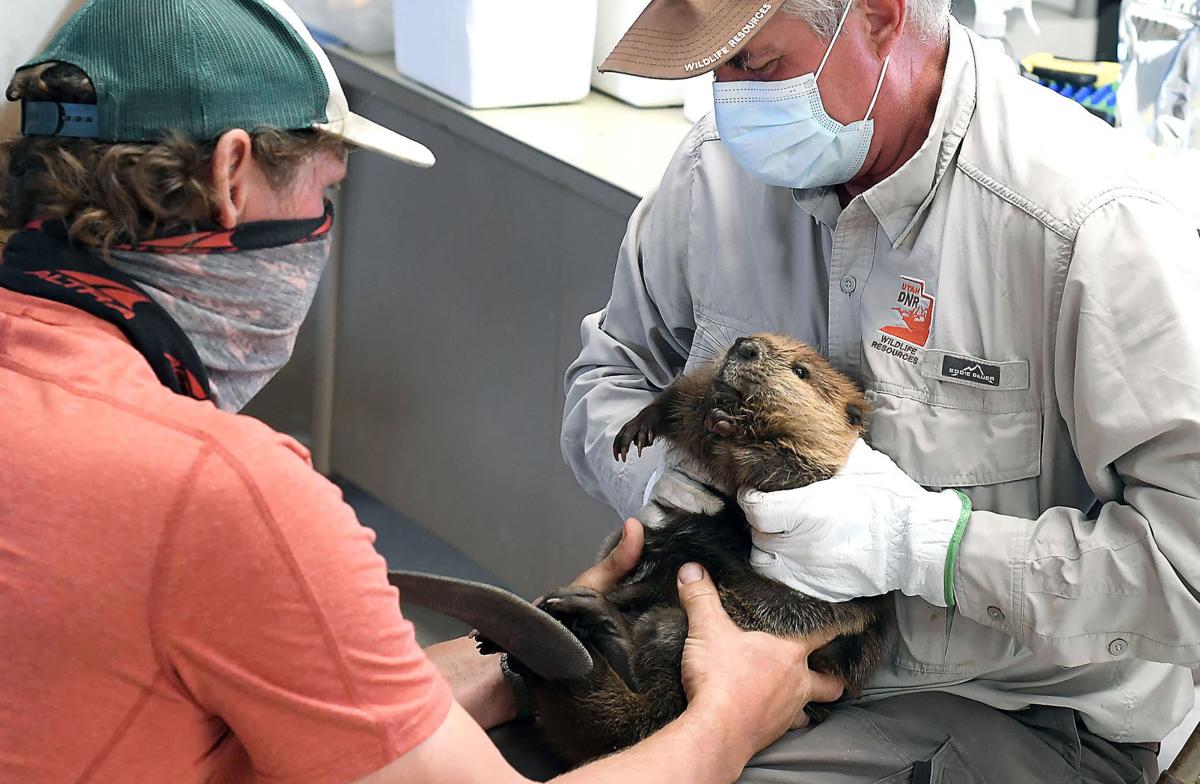 Nate Norman, left, and Boyd White examine a beaver on Friday in Millville. The beaver was trapped at a golf course in Park City and after being quarantined will be released in a more desirable location in the state. 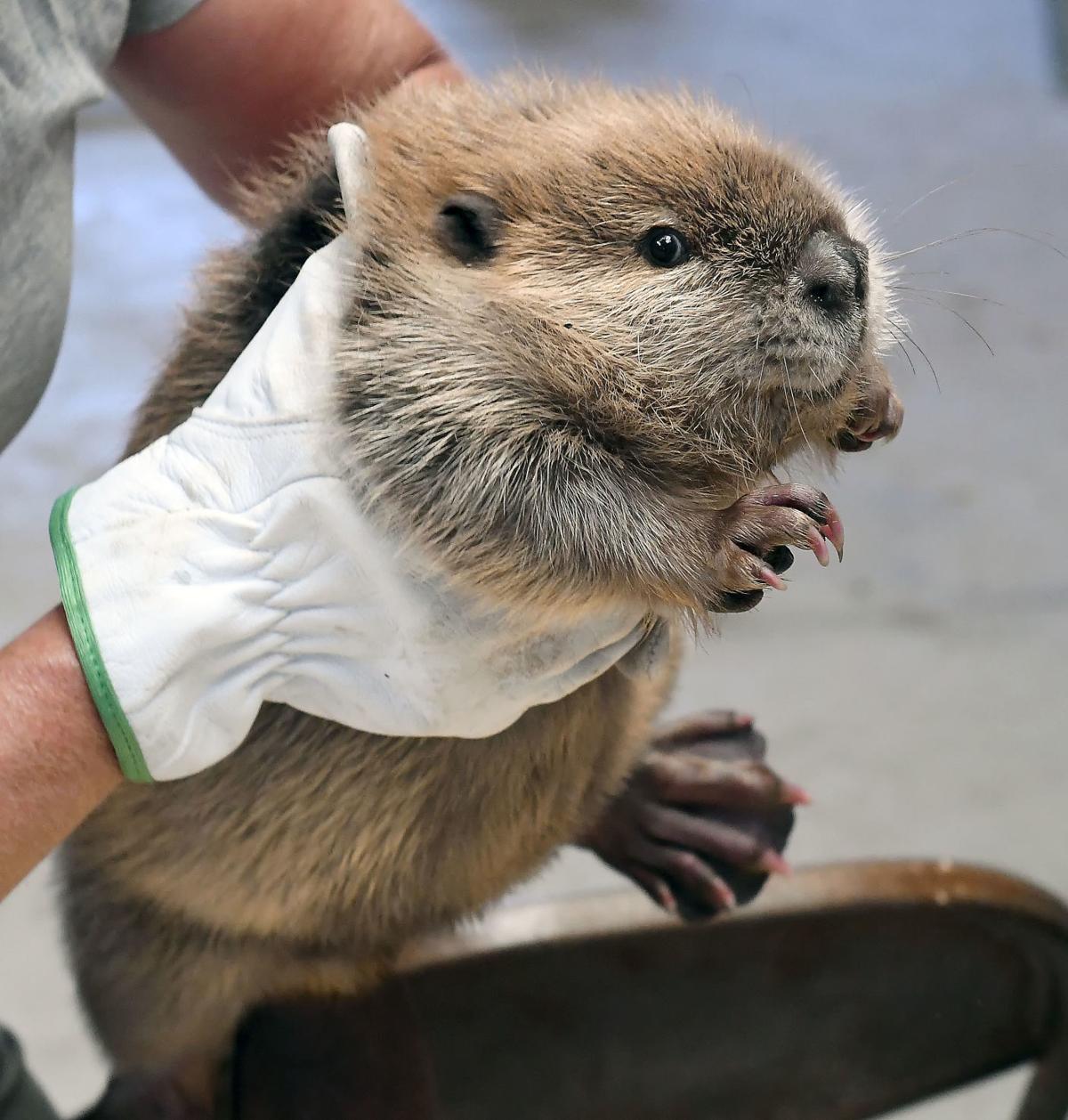 Becky Yeager holds a beaver on Friday in Millville slated for relocation.

Nate Norman, left, and Boyd White examine a beaver on Friday in Millville. The beaver was trapped at a golf course in Park City and after being quarantined will be released in a more desirable location in the state.

Becky Yeager holds a beaver on Friday in Millville slated for relocation.

On Friday, a small troupe of volunteers and researchers gathered outside the Millville Predator Research Center in Millville for an ongoing relocation project. Not to work with coyotes, or even the occasional bear housed at the facility, but with a non-predatory, nocturnal species: beaver.

The project, a partnership between Utah State University, the U.S. Forest Service and the Utah Division of Wildlife Resources, is part habitat restoration and part population growth for the species, as it takes nuisance beavers and introduces them to riparian areas to aid in environmental restoration.

“If there’s an area with damage, put these guys in, and they do the work,” said Nate Norman, the lead field biologist for USU’s Beaver Ecology and Relocation Center.

Norman has been a wetland biologist specializing in restoration and vegetation for 20 years. He’s worked on hundreds of restoration projects. But three years ago, he learned how to trap and relocate beavers and has added that knowledge to his toolbelt.

Last year, he helped trap and process 50 beavers, and the program has already done 25 in 2020, despite a sharp decline in volunteers due to the COVID-19 pandemic.

Though Norman has been bitten twice over the last three years, he said the animals are actually quite docile, though several of the males processed on Friday put up a fight when their underbellies were exposed to sex the animals.

“When you’ve been doing this for a while, you kind of get a feel for it,” he said. “You can feel the beaver’s aggression, and you get a sense of it.”

Aspens, apples and root vegetables are the animals’ favorite victims. Though private landowners may object to the casualties in their landscaping — like the Park City golf course that lost a few 20-foot-tall trees to a family of at least four beavers recently trapped and processed through the program — their benefits to the environment far outweigh any damage they cause, according to researchers.

“These guys are natural engineers, and they'll build dams to keep water in the system longer,” said Boyd White, with Utah DWR.

Boyd, who transported the beavers from Park City to Millville for processing, said the small colony will be relocated to Tie Fork for a stream restoration project away from the golf course after the animals are quarantined to ensure no parasites, like Whirling Disease, are being introduced to an area along with the beavers.

Similar programs have been popular in dry Western states like Idaho and Nevada.

“Riparian habitat is the most valuable habitat in Utah,” Boyd added. “More species of wildlife use riparian habitat than any other, and so the more of it that we can create, the better off our wildlife will be.”

Norman said while some landowners consider them a nuisance, others, like local farmers and ranchers, are requesting beaver colonies for their lands to help stock ponds hold water.

This has been the case for Jay Tanner’s ranch in Grouse Creek. Prior to the successful beaver introduced on his property, the creek bed was too steep for animals to get to and from the water source. Now, it's easily accessible, and the beavers made ponds as well.

Similar programs in Idaho have been instrumental for fish populations, Norman added, where there are “100 times more fish per mile than what was there prior to the beavers being reintroduced.”

“We’ve had a lot of success in small scale, working with water masters and irrigation companies, to people who have used lethal beaver trapping in the past and now are considering live trapping,” Norman said. “There are a few local landowners who have changed their mind on lethal-trapping beavers, a few who still let beavers live there.”

While beavers are not endangered or threatened, Norman said the relocation program can help boost the species’ numbers which have never recovered from overhunting during the fur trade that drew trappers to Utah and the West in the first place.

On top of moving the beavers to areas in need of help recovering (mostly due to flooding and overgrazing or over clearing vegetation), the researchers and volunteers track the animals’ weight to help determine their age, sex and general wellbeing. This data is then used to sometimes couple the sub-adults to form new colonies.

A PIT, or point in time microchip, tag is injected into the beaver’s tail to help researchers determine how many of the relocated animals survive or stay in the area they’re planted, something USU graduate student Emma Doden studies with GPS tags on the Price and San Rafael rivers — some of the driest areas in the state.

Norman hopes that similar tracking and GPS tags can be implemented in Cache County, as well. Currently, it’s more observational, via game cameras and looking for new dams that have built since reintroduction.