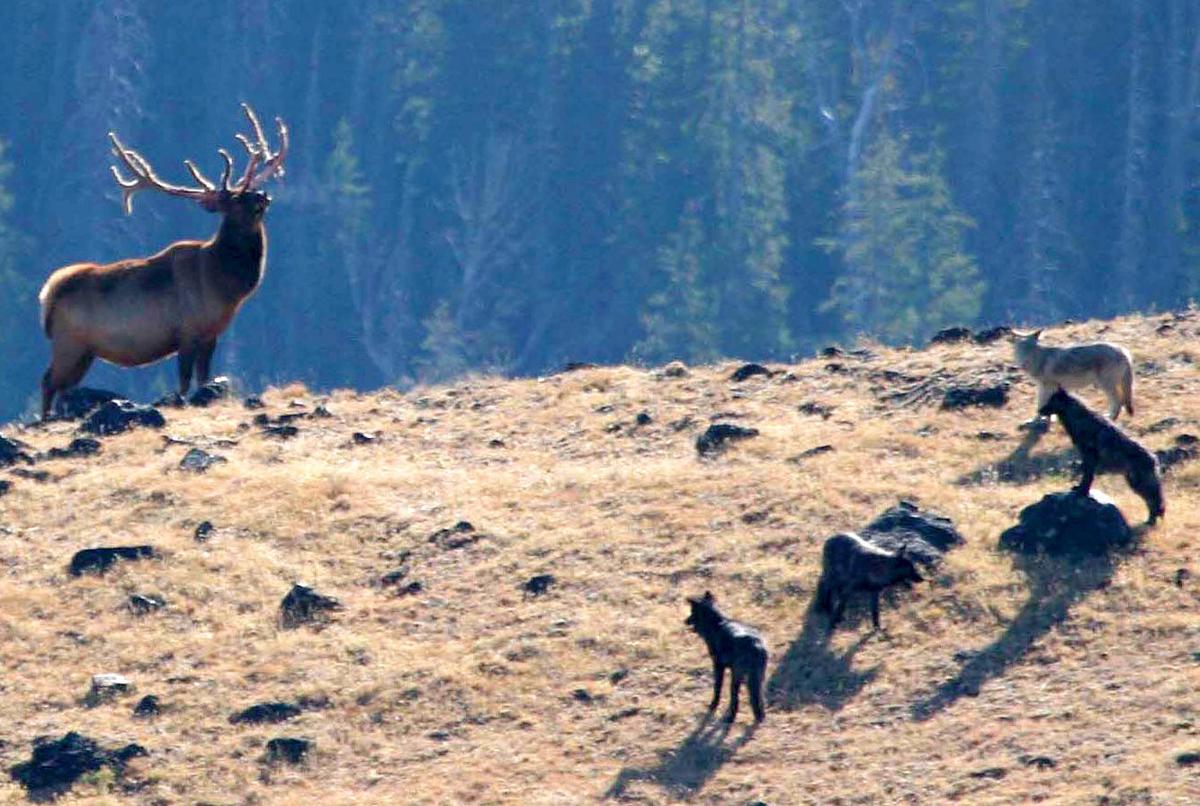 The Agate wolf pack is seen in a stand off with a bull elk. 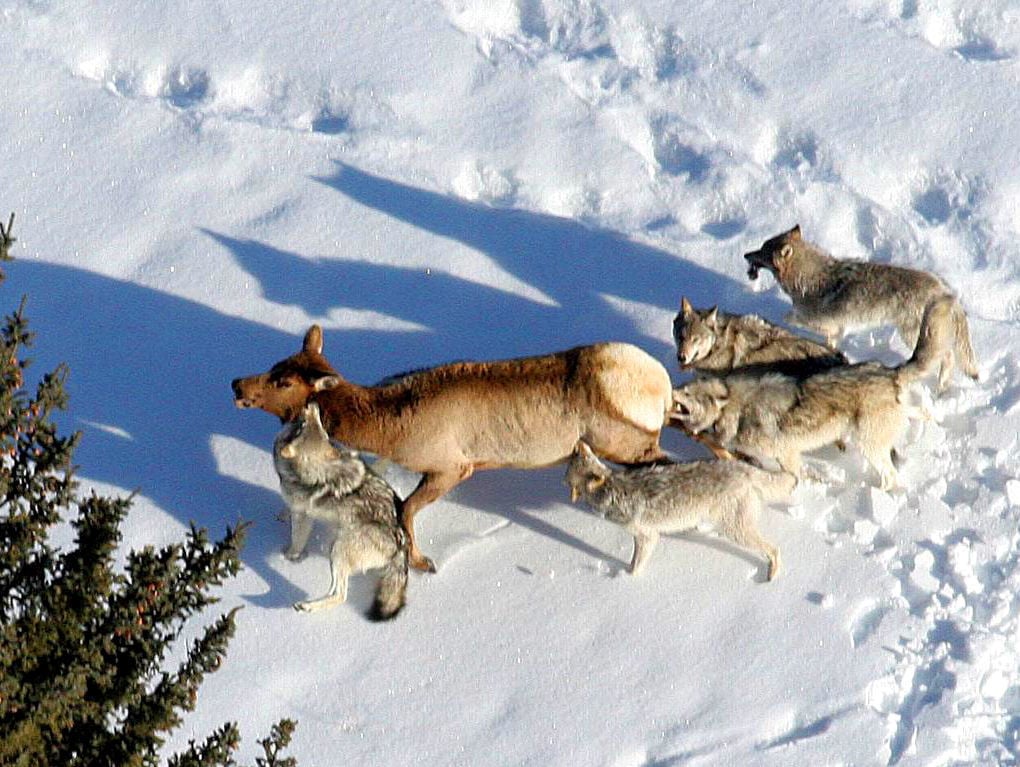 Yellowstone wolves take down an elk. 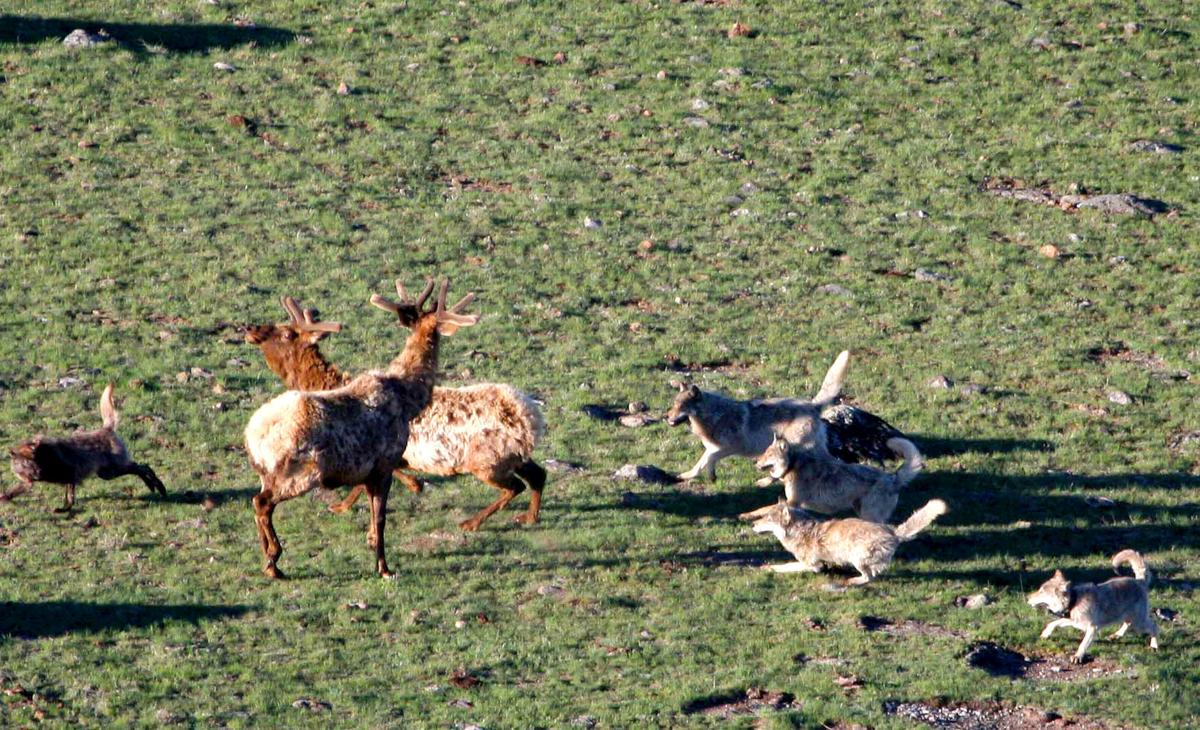 The Leopold wolf pack is seen hunting bull elk in Yellowstone in May 2007. 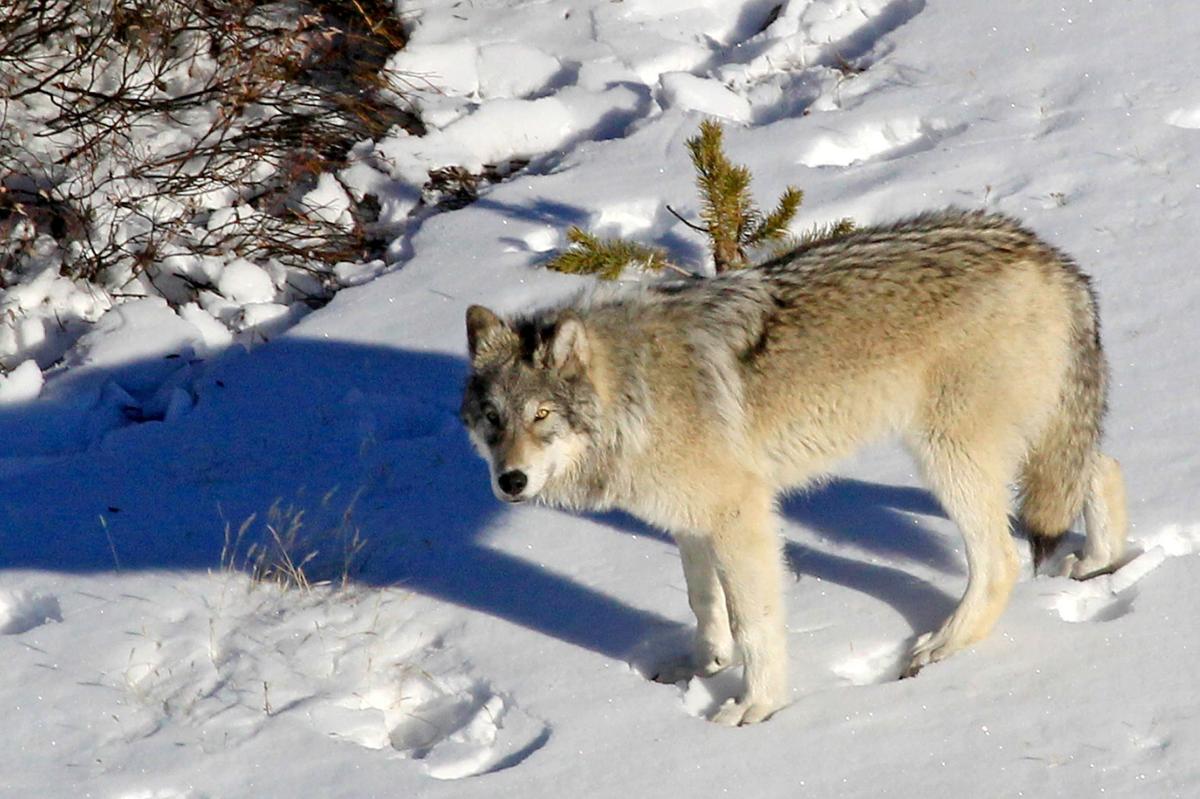 A wolf from the Yellowstone Delta Pack is seen in this November 2013 National Park Service photo.

The Agate wolf pack is seen in a stand off with a bull elk.

Yellowstone wolves take down an elk.

The Leopold wolf pack is seen hunting bull elk in Yellowstone in May 2007.

A wolf from the Yellowstone Delta Pack is seen in this November 2013 National Park Service photo.

When he was a National Park Service volunteer in November 1995, just months after wolves had been reintroduced to Yellowstone National Park, MacNulty watched repeated interactions between the two animals.

“I saw elk actually driving wolf off, keeping them at bay and surviving encounters with wolves,” he said. “That really established my perspective on what the relationship is between the wolves and elk.”

All those years after his volunteer shift, MacNulty, his former graduate student, the National Park Service and other collaborators believe they’ve shed light on the Yellowstone wolf-elk interactions in a new study, the findings of which were published last month in the journal “Ecological Monographs.”

The USU researchers’ study could not have happened had it not been for an esteemed ecologist who set out to study how the wolves’ reintroduction impacted elk.

In 2001 and 2005, John Laundre published findings to two studies, which suggested elk were living in a “landscape of fear.” That is, elk were increasing their vigilance in looking out for wolves and avoiding open areas away from forests, where wolves often are.

Laundre’s studies were frequently cited by other researchers who studied wolf-elk interaction.

“You can’t be too critical of these early scientists because they were doing the best that they could with the data that they had at the time,” MacNulty said.

Still, MacNulty and one of his graduate students, Michel Kohl, were critical of that previous research, seeing contradictions in the findings and thought the “landscape of fear” concept needed to be clarified.

“At the time that the idea of fear was being proposed and promoted in northern Yellowstone, there was really a rush to judgement, there was a lot of excitement that wolves were having these effects — and there was some data,” MacNulty said. “But they didn’t drill down deep enough … to be sure that what they were seeing was in fact what was actually occurring.”

Kohl added that wolves are often thought of as “a big, bad, scary animal.”

“With that, the thought is they don’t need to kill elk; they can just scare them,” Kohl said. “There’s not the data out there to suggest this actually happened. Are they actually this big, bad, scary animal on the landscape or are elk able to deal with them?”

The USU researchers were not the only ones curious about the “landscape of fear” concept; officials with the Park Service were too.

Doug Smith, senior wildlife biologist at Yellowstone, had been critical of the “landscape of fear” because, he said, it did not involve researchers examining collared wolves and elk; just looking at how plants changed as a result of elk browsing.

“Most of the work thus far was … trying to relate that to elk and making educated guesses about the wolves,” Smith said.

A study by MacNulty and Kohl and wolves’ interaction with elk would help in the mission of restoring natural systems in the park.

“We have to know what natural is,” Smith said.

He said before wolves were reintroduced, elk were overusing willow and aspen plants.

“This is unnatural because there were too many elk,” Smith said.

He said MacNulty and Kohl’s study would help determine if the wolves did in fact restore a natural system to Yellowstone.

In the abstract of their study, MacNulty and Kohl argue researchers before them believed the “landscape of fear” is “fixed spatial pattern as long as the predator is present,” that as long as there’s a “constant possibility” that wolves will hunt, there will be “a chronic state of apprehension” among elk.

The theory does not account for how wolves’ hunting activity can vary throughout the day or how elk’s apprehension towards them can fluctuate, the USU researchers stated in their abstract. Thus, MacNulty and Kohl argue, there is potential for “a dynamic LOF (landscape of fear) despite the constant presence of predators.”

To conduct their study, MacNulty and Kohl used data, provided by the NPS, of some GPS-collared elk and wolves.

The collared-elk data spanned from 2001 to 2004 because that’s when many scientists felt the “landscape of fear” occurring, according to MacNulty.

With the elk data, Kohl said, “We looked at how do elk move on the landscape. We compared where the elk go compared to where they could have went.”

In 2004, wolves became collared, so MacNulty and Kohl used data from a sample of those animals from that year until 2013, when their study ended.

“How are collared-wolves moving on the landscape? Are they hunting or are they sleeping?,” Kohl said. “We used those two bits of information from wolves to look at how elk made those decisions.”

MacNulty said the data showed them wolves are mostly active in the morning period and at dusk, whereas mid-day and at night, “they’re actually not very active at all.”

MacNulty emphasized an important part of the study, which only examined a small sample of wolves and elk and a 995-kilometer section of northern Yellowstone considered “an important winter range for elk.”

“We’re still drawing an inference, a conclusion from a very small sample,” MacNulty said. “We don’t really know how representative they are of the overall population.”

However, MacNulty feels a sense of satisfaction with the findings of his study because it confirms what the USU associate professor saw when he was a volunteer with the NPS years ago.

“The results that we published are consistent with the early observations of mine and elk being really good at living with wolves,” MacNulty said. “We shouldn’t really be surprised by that because these are two species that have been evolving together and co-existing for thousands of years.”

MacNulty emphasized his findings with Kohl should not be interpreted as that the “landscape of fear” does not exist.

“We claim that it is so highly flexible over time that it may be of little ecological importance in northern Yellowstone,” he wrote in an email to The Herald Journal.

Doug Smith, a Yellowstone National Park biologist, said MacNulty and Kohl’s research was part of a long-term study the NPS is conducting on wolves and elk. The study has been going on since the reintroduction of wolves to the park in the mid-1990s.

In 2011, Smith said, the NPS decided to look at the “landscape of fear” concept, which had been hovering in academic circles since about the time the wolves were reintroduced into Yellowstone.

But he believed only utilizing collared elk and wolves would be “the true test” of the “landscape of fear” concept.

“What is the impact of wolves on elk? Well, you got to have both species marked,” Smith said.

He noted that MacNulty and Kohl’s study is the first one using collared wolves and elk.

“This paper is a watershed event,” Smith said. “How wolves have impacted elk has been debated, this has partly resolved the debate. It gives us better data and clarity how elk have responded to wolves — up until now people have tried to solve this puzzle with indirect data. Our data is directly obtained from wolves and elk.”

Just as Smith was hoping, MacNulty and Kohl’s study helped determine if the wolves restored a natural system to Yellowstone.

“Wolves, with other carnivores and other factors, have been part of the elk decline in the park, which has reduced browsing pressure on woody vegetation,” Smith wrote in an email to the newspaper.

Although there is more research do be done on wollf-elk interaction, Smith said, knowing more about elk impact on wolf reintroduction is better than not knowing.

“Our mission is to preserve Yellowstone and this (study) just adds weight to that argument,” Smith said. “I think studies like this support the preservation mission.”