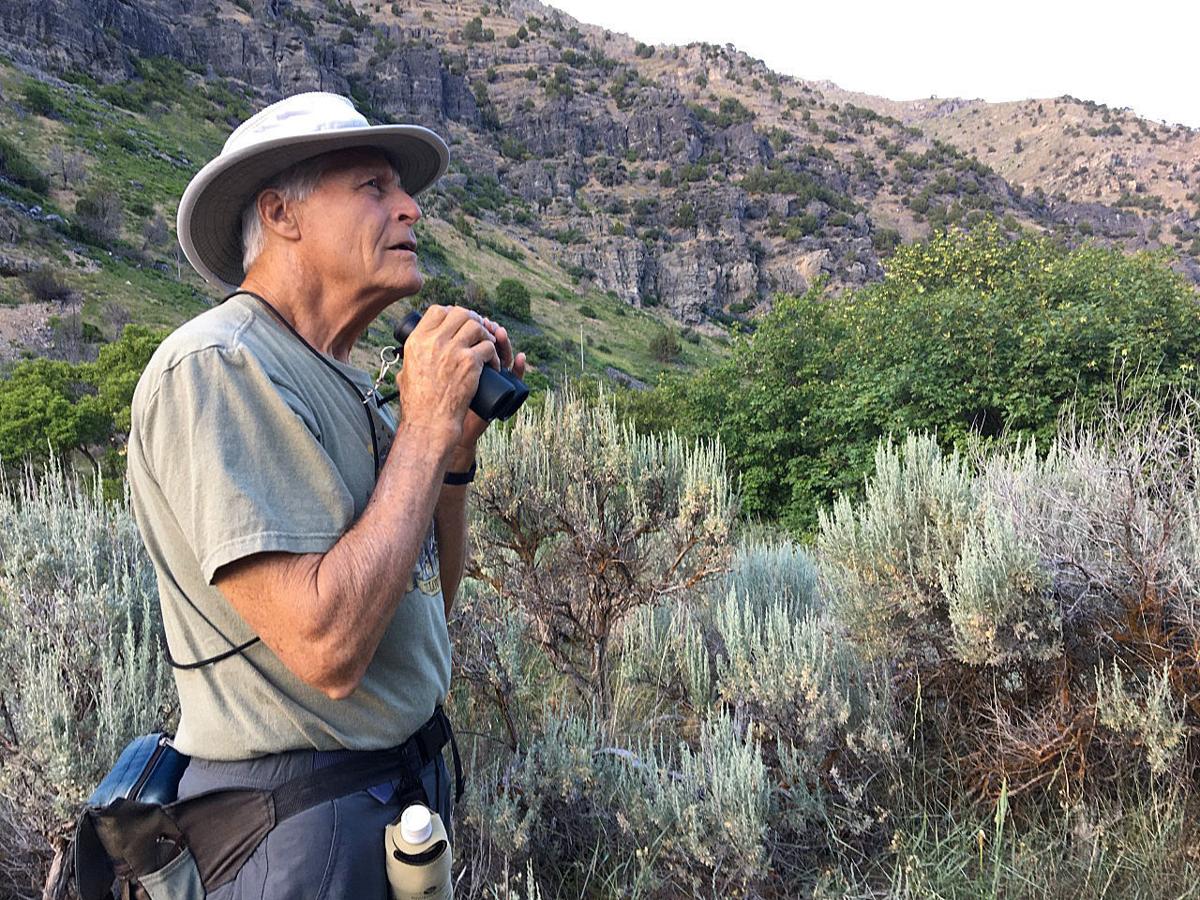 John Shelly, a Florida resident who is part of USU’s Summer Citizens program, looks for birds along the Blacksmith Fork River trail on Saturday. 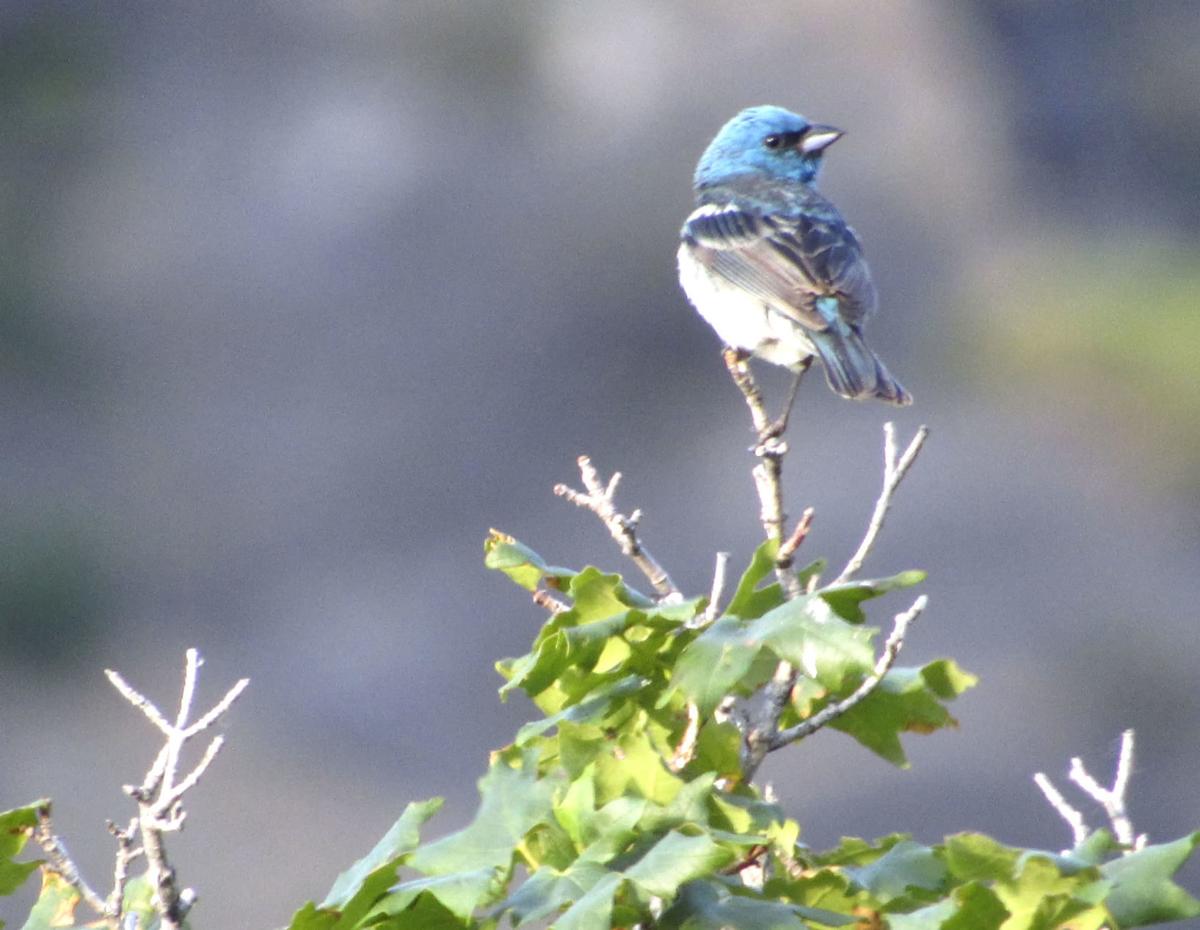 A Luzuli Bunting is seen along the Blacksmith Fork River Trail during the Bridgerland Audubon Society’s bird walk event on June 29.

John Shelly, a Florida resident who is part of USU’s Summer Citizens program, looks for birds along the Blacksmith Fork River trail on Saturday.

A Luzuli Bunting is seen along the Blacksmith Fork River Trail during the Bridgerland Audubon Society’s bird walk event on June 29.

BLACKSMITH FORK CANYON — If they formed a garage band, you might call them The Birders.

But the small group of Cache Valley residents and members of USU Summer Citizens who ventured out to the river trail on Saturday night were not armed with instruments with the intent to make music. Instead, they held binoculars and stayed relatively quiet to look at birds and listen to their chirps — no matter how faint they might have been.

“Oh, there’s a hawk!” said one member of the group just after they had disembarked from their cars, parked off of State Route 101.

The outing was hosted by the Bridgerland Audubon Society, a nonprofit conservation organization with a special emphasis on birds and their habitats, according to the group’s website.

Every few weeks, members of the organization will host a free bird walk along various trails in the valley for people of all ages.

Joe Andreasen, a member of the Bridgerland Audubon Society, led the group on Saturday through the trail for more than an hour, until dusk. In an email to The Herald Journal afterwards, Andreasen said he believes everyone can gain something different from participating.

But, Andreasen wrote, “probably the most universal reward from coming on a bird walk is getting outside and experiencing nature.”

“The focus might be birds, but there is a lot more to experience and see outdoors,” he wrote.

Andreasen told fellow bird-watchers during the walk that usually such outings have a pattern: a “dynamite start,” a “lull in the middle” and an ending with “something crazy.”

“That tends to happen to me every time,” he said.

That “crazy something” might have been the group seeing Saturday’s “target”: the gray catbird. Andreason said it’s a bird he heard a few outings ago but did not see.

This gray catbird has a gray body, a dark gray-colored top on its head and a cinnamon-colored tail. It’s rare to find in the summer, but it can be found by streams, the Bridgerland Audubon Society’s website states.

Unfortunately for the group, they did not see a gray catbird on the river trail Saturday night.

Their walk began about 2 miles into Blacksmith Fork Canyon, with the group crossing Highway 101 and going through a gate to begin their trek on a double track trail.

Their journey offered some steep inclines and was not always a smooth walk throughout. Sometimes, Andreasen took participants off the trail and into some brush to look for birds that could have been found in a deeper, less visible parts of the canyon.

One participant did not have binoculars, but most did, and they stopped every so often to look at a bird Andreasen said he found. It wasn’t long before the group became collaborative, stopping to point and notify each other of different birds in their pass.

Birds seen or heard on Saturday included the yellow warbler, cedar waxwing, lazuli bunting, a red-tailed hawk and one species that surprised the group: a rock pigeon. The National Audubon Society’s website says it’s widely known as “the common city pigeon” for its perceived nuisance in urban areas throughout the U.S., although it can be found in the wild, nesting on cliffs far from cities.

Andreasen told his fellow birders on Saturday they can add a bird to their “life list” even if they don’t actually see it and are only able to identify it by its sound.

At the end of the walk, Andreasen concluded it was “not the best” evening for bird sightings, with about 15 species seen. The last walk saw a little more than 25.

Saturday’s bird watchers, some of whom referred to themselves as “birders,” included Logan resident Colton Mondragon, who has been watching the winged species since he was a child.

“I’ve actually loved birds my whole entire life. It’s just the last two years I got the equipment I needed to do bird watching,” he said.

Mondragon has binoculars, a spotting scope and one of his dad’s old cameras to take pictures of birds.

“I love it. It’s awesome. I like getting together with people that like to talk” about bird watching, he said. “My wife, she likes it, but she’s not a fanatic … I go all around the valley.”

Mondragon said he likes the “thrill of finding a new bird.”

“Even the ones you’ve already seen, just getting better pictures of them than in the past,” he said. “It’s something I’ve never stopped enjoying.”

John Shelly, a Florida resident who signed up for Utah State University’s Summer Citizens program, said bird watching is a “natural carryover” from his Boy Scout days. He stopped and got into the activity in his later years through his wife, Chadda, and her friends.

John and Chadda each held their own binoculars during Saturday’s outing and at times consulted a book with pictures of birds to help them identify what they were seeing.

“It was a nice walk, beautiful evening,” John said, before adding with a chuckle, “Birds don’t always cooperate.”

By that, John meant that birds can fly away by the time he puts the binoculars up to his face. He had to teach himself how to have quicker reflexes.

“That’s a basic thing all new birders have to learn,” John said.

He said it’s also frustrating when birds “sit up there all the time and you can’t find them.”

Regardless of whether people find birds during these outings, Hilary Shughart, a member of the Bridgerland Audubon Society, said they are important.

“They provide community for a diversity of nature lovers, bringing together experts and beginners who share the joy of seeing and hearing some of the 319 species of birds documented in Cache Valley,” Shughart wrote in an email to The Herald Journal.

There are several bird walks scheduled for this month. They will be held: