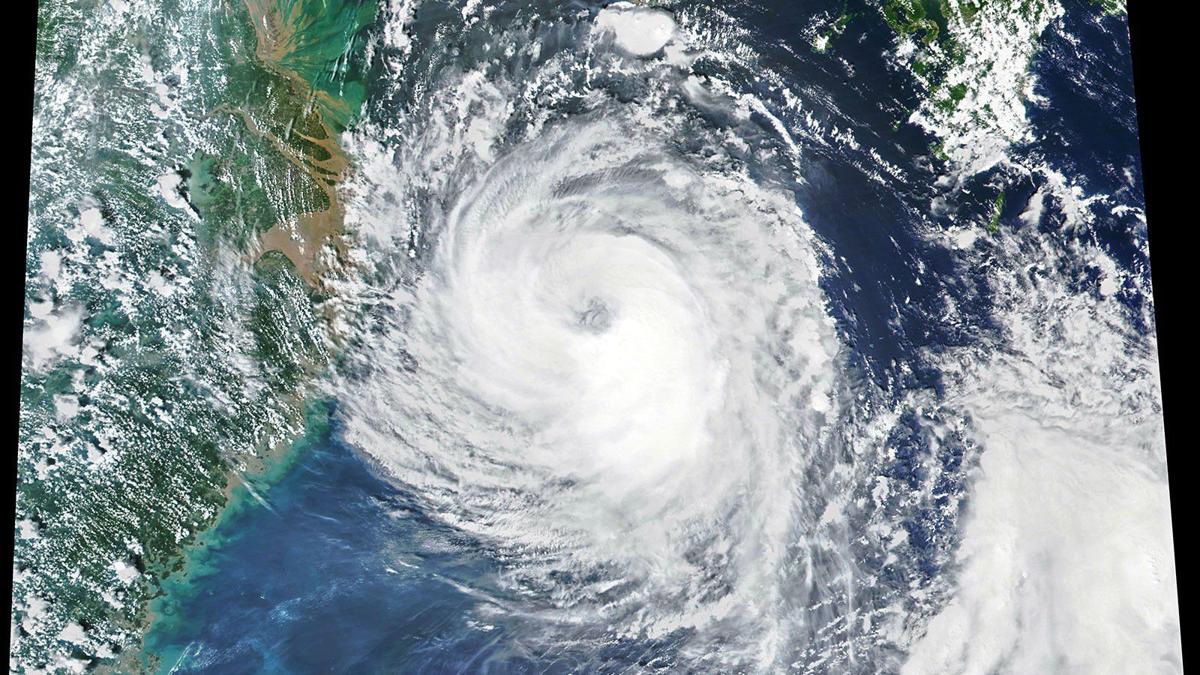 A NASA Earth Observatory image of Typhoon Bavi between Okinawa and China on Sept. 25, 2020.

An animation shows the paths of Typhoon Bavi, Typhoon Maysak and Typhoon Haishen and their impact on the jet stream.

Hurricane-force winds that struck Utah in early September may have been stoked by an unexpected source: typhoons in the western Pacific.

Writing in the journal Geophysical Research Letters, an international team of researchers present evidence that three storms that ran into the Korean Peninsula within two weeks of each other in early fall of 2020 each contained enough energy to perturb the jet stream—creating an atmospheric “wave train” that further amplified the likelihood of strong winds across western North America.

“At first, this looks like a case of falling dominos, and we think that alone is interesting,” said Jacob Stuivenvolt Allen, a doctoral student at Utah State University and the first author of the report. “But what that chain of events connects, across the entire Pacific Ocean, are very deadly and impactful weather events, and so we think this may be a very important finding as well.”

The research examined the impact of Typhoon Bavi, Typhoon Maysak and Typhoon Haishen, which struck the Korean Peninsula on Aug. 26, Sept. 2 and Sept. 6, respectively, causing widespread flooding, mudslides and dozens of deaths in the region.

“One typhoon of this magnitude would not be unusual in Korea each year,” said co-author

Jin-Ho Yoon, a climate researcher at the Gwangju Institute of Science and Technology. “But three in two weeks? That was quite historic.”

When USU climate science Professor Simon Wang took note of the timing of the East Asian typhoons and North American wind events, he wondered whether there could be a connection.

“Typhoons dissipate eventually,” he said, “but if they’ve tracked far enough north to reach the jet stream, the energy they release into the upper troposphere can have a strong effect on westerly air currents.”

The research team determined likely effects on polar-circulating atmospheric waves across North America by using forecast models that both included and excluded the faraway typhoons.

“In the forecasts that did not include the typhoons, the most powerful driver of the windstorms across the northern United States doesn’t materialize in nearly as dramatic fashion,” said study co-author Matthew LaPlante, a doctoral student at Utah State. “When we compare that with forecast data showing the impact of these cyclones on the jet stream, the evidence of a cause and effect is compelling.”

An animation showing the paths of the typhoons and their impacts on the jet stream is available online.

“We think that the time lapse we’ve created, while very simple, is a very powerful way to visualize the impact of these cyclones,” Stuivenvolt Allen said. “It’s easy to see the jet stream becoming more perturbed as each of these cyclones released massive amounts of latent heat into the atmosphere.”

While the impacts of climate change on these events were not evaluated in this study, many researchers believe warming seas may be a factor in typhoons that reach higher latitudes — increasing the odds of a date with the jet stream.

“For now, it’s a novel idea that one deadly weather disaster might have helped to trigger a completely different one, in a region very far away,” Yoon said. “But in the future, as extreme weather across the world increases, this might not be so surprising. We might one day look at a disaster that happens in one part of the world and recognize that there soon may be other consequences for other regions.”