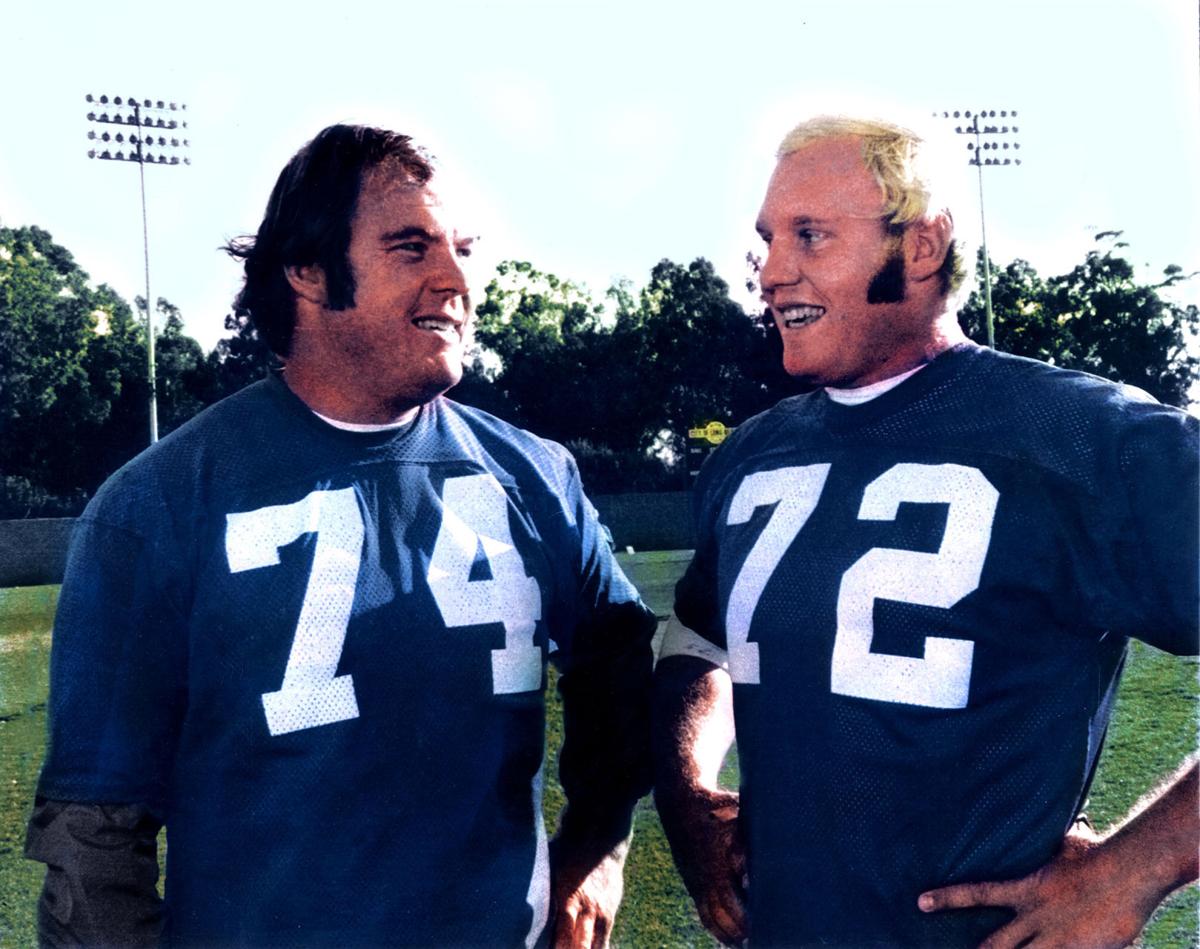 Merlin Olsen (74) and Phil Olsen were star football players at Logan High, Utah State and in the NFL. A ceremony will be held Thursday at Logan High School to honor Merlin Olsen. 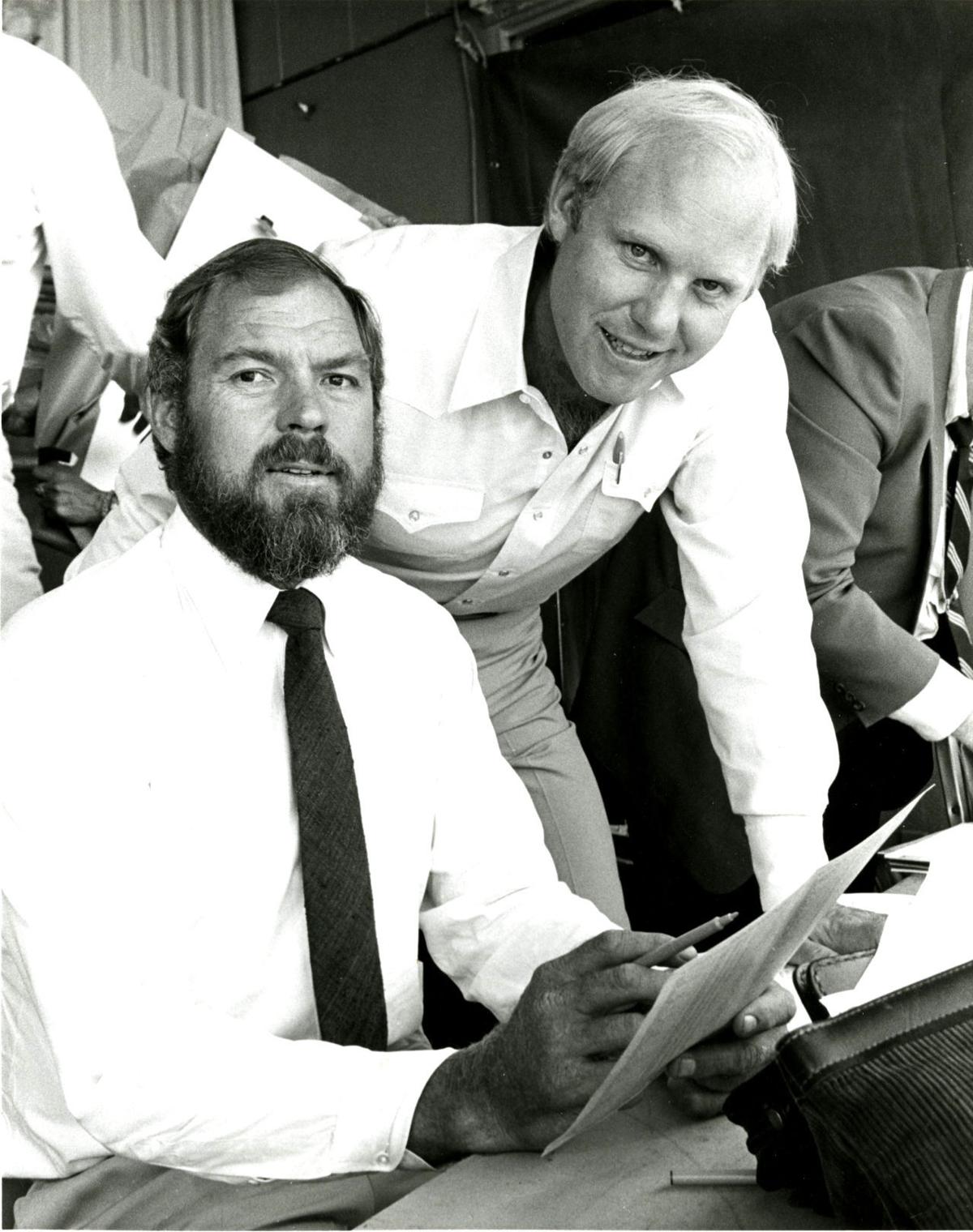 Merlin Olsen, front, and his brother Phil Olsen pause a moment for a photo while doing a television broadcast several decades ago.

Merlin Olsen (74) and Phil Olsen were star football players at Logan High, Utah State and in the NFL. A ceremony will be held Thursday at Logan High School to honor Merlin Olsen.

Merlin Olsen, front, and his brother Phil Olsen pause a moment for a photo while doing a television broadcast several decades ago.

Without a doubt, Merlin Olsen is one of the greatest things to come out of Logan.

Logan citizens will have the opportunity to celebrate the community’s role in Olsen’s success with an upcoming event.

The Pro Football Hall of Fame and Ford Motor Company will honor Olsen’s hometown and his high school with a ceremony later this week. Friends, fans and family members of Olsen are invited to attend.

The Hometown Hall of Famer program presented by Ford Motor Company will take place at Logan High School on Thursday. The festivities are scheduled from 9-10:30 a.m. The purpose of the program is to “honor the hometown roots of the greatest heroes of the game.” A bronze plaque will be presented to Logan High, recognizing it as an official high school of the Hall of Fame.

George Veras is the president and CEO of Pro Football Hall of Fame Enterprises. He will be on hand Thursday morning to present the award to Logan High and the Olsen family. Merlin Olsen passed away after fighting mesothelioma in 2010. His younger brother, former teammate and business partner, Phil, will accept the award on behalf of Olsen and his family.

“This is for the Hall of Famer, to recognize the great support they have had from their community on their road to the Hall of Fame,” Veras said. “We created this concept when the Hall of Famers came to me and said ‘We have so much of a light shined on us, what can we come up with to shine the light on others who’ve helped us?’”

“They do this with all of the enshrinees,” Phil Olsen said. “They’ve been trying to do this for a number of years. It’s just this year that Merlin’s wife (Susan) and the family felt like this was the right time to do it.”

Merlin Olsen graduated from Logan High and went on to a storied career at Utah State University before becoming one of the all-time greats in the National Football League. The defensive lineman was inducted into Pro Football Hall of Fame in Canton, Ohio in 1982, in his first year of eligibility. Merlin Olsen played in the NFL for 15 seasons, all with the Los Angeles Rams. The Rams selected the Aggie star with the third pick of the 1962 NFL draft, and he rewarded them. Merlin Olsen made the Pro Bowl a record 14 times, all of these selections coming in consecutive seasons.

The “gentle giant” was a vital part of the “Fearsome Foursome,” the famous Rams defensive line that terrorized quarterbacks in the 60’s. Merlin had the unique opportunity to play alongside his brother Phil with the Rams from 1971-74. Their younger brother Orrin also played with the Kansas City Chiefs during their career. An Olsen nephew, Hans, played in the league later on.

“The Olsen family is remarkable,” Veras said. “With the three brothers that played in the NFL, they are like the first family of football.”

As the ceremony nears, Phil spoke of his memories growing up with Merlin and the other nine Olsen children in Logan.

“It just brings back a rush of those memories,” Phil Olsen said. “Growing up in Logan was a special place. I grew up in a large family on the first house on Canyon Road. It was a special time to grow up, with the park right across the street. It’s Merlin Olsen park, but in the Olsen family, we all refer to it as Olsen park.

“So many Olsens used that park, and it was like an extension of our living room. Whether it was playing football or baseball, or ice skating during the winter, it was a very special place to go. It brings back a rush of memories of growing up in Logan and playing football at Logan High school before going on to Utah State University and the NFL.”

Logan High will be the 112th high school honored under the Hometown Hall of Famer program. Under the program any student of Logan High, both current or former, as well as any faculty members, will have free admission to the Pro Football Hall of Fame for life.

Veras has been to Logan many times in his career with sports broadcast and production.

“I think it’s obvious that the sense of community is so strong just by the fact of what they’ve produced in the Olsen family,” Veras said.

“It makes us feel good,” Phil Olsen said of Logan’s pride in the Olsen family. “Merlin tried to live a life of impact, and I’ve tried to do that as well. There is a tremendous responsibility that goes along with that type of status. … I’m honored, and I know that Merlin would say the same thing. Our family is incredibly honored and blessed in the way that we’ve been treated by Logan. Logan is a big part of us.”