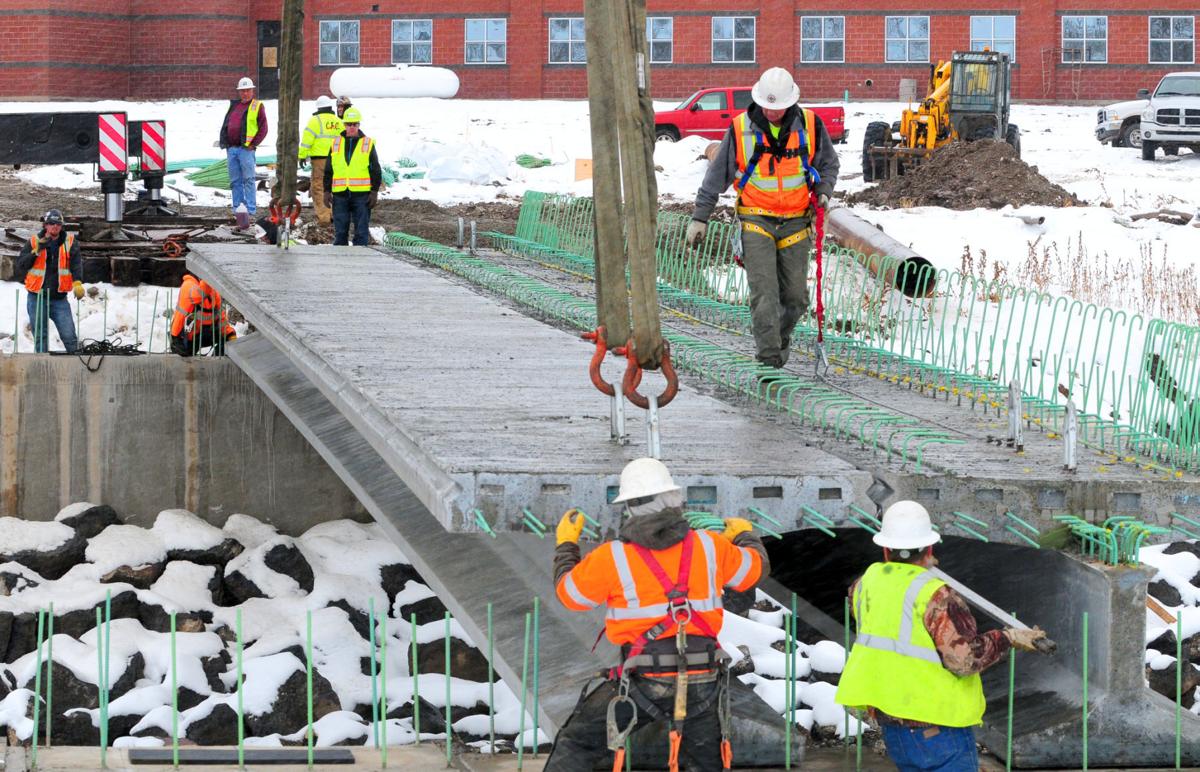 Construction crews from Cannon Builders work to position girders for the new bridge outside of Ridgeline High School. The nearly 100,000-pound girders will connect State Road 165 in Nibley to the new school situated across the Blacksmith Fork River in Millville. 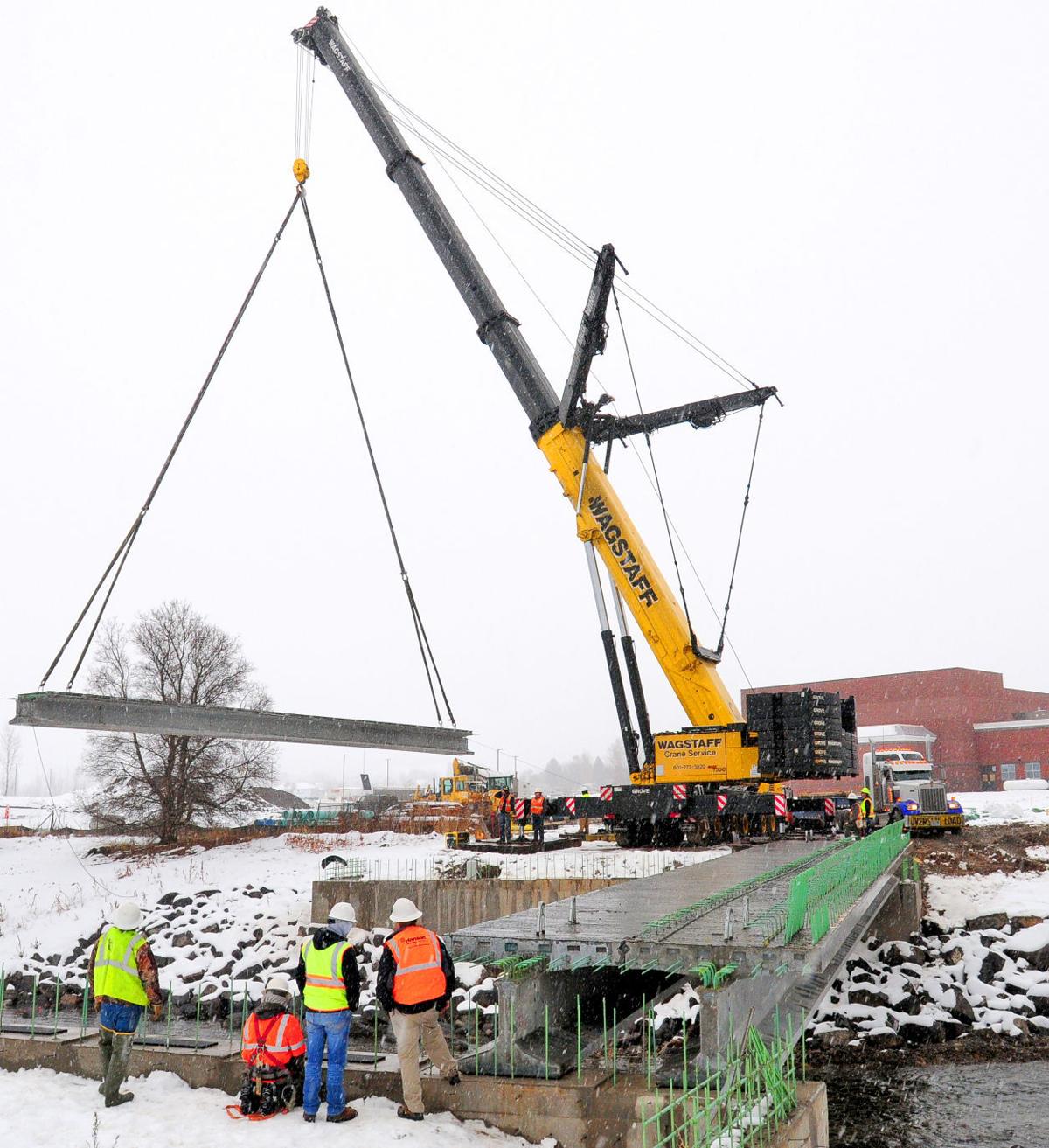 Construction crews from Cannon Builders work to position girders for the new bridge outside of Ridgeline High School. The nearly 100,000-pound girders will connect State Road 165 in Nibley to the new school situated across the Blacksmith Fork River in Millville.

NIBLEY — A new bridge over the Blacksmith Fork River will have embedded sensors to monitor the performance of the structure, a feature that's more likely found on some of the most iconic bridges in the world.

It's all thanks to a partnership between Nibley, Utah State University and Campbell Scientific, the Logan-based designer and manufacturer of dataloggers and measurement and control products. Campbell Scientific is supplying the equipment, and USU is providing the expertise to install it.

“For this particular bridge, you could argue that (the sensors are) not critical; there are tens of thousands of bridges around the country like this, but this is one of the only ones I'm aware of that's going to have this kind of instrumentation,” said Nibley Mayor Shaun Dustin, who noted this type of technology is typically found on bigger structures like the Brooklyn Bridge in New York and the Confederation Bridge in Canada.

Crews were busy Monday and Tuesday installing 10 girders with the sensors already in them. Cannon Builders and DWA Construction are responsible for installing the bridge and embedding the sensors, Dustin said.

Paul Barr, head of the civil and environmental engineering department at USU, described the project as “pushing the envelope of what's been done before in the past on these bridges.”

“Large bridges are incredibly rare, and the bridges that we have here in Nibley are far more common,” Barr said. “So to improve those types of bridges can be far more impactful on a widespread scale than instrumenting one iconic bridge."

USU became interested in bridge research more than 10 years ago, around the time of the Salt Lake City Olympics, when bridges were being demolished through the Salt Lake corridor. USU started the Long-term Bridge Performance Project.

“We're trying to improve the durability of bridges, understand the performance of bridges and reduce taxpayer expenses; if we can make them last longer and have them maintained with less money, that's a win for everybody,” Halling said.

USU provided guidance on the placement of the 90 sensors embedded in the bridge.

“In order to determine the behavior of the actual beams, you need to know the stresses at specific locations in the beams,” Halling said. “That's why the placement is so critical, so we can determine the overall behavior of each of the beams.”

Asked what he wants Nibley to learn from the sensors' data, Dustin said it's “almost experimental” because these instruments have never been placed on a bridge this size. Nibley officials are anxious to see what data USU can get from the sensors

"But at a basic level we're going to be looking at things like load and acceleration,” said Dustin, who also runs the structural and geotechnical instrumentation group at Campbell Scientific. “If a heavy load drives over the bridge and it changes the way the bridge behaves, then … we know we need to go in and figure out what to do about it.”

But Dustin called the bridge “low risk” in terms of a failure, and it will be carrying school buses for the most part, likely owing to its position connecting the city over the Blacksmith Fork River to a new high school.

Barr said USU's interest in this project comes from its work with bridges over the last 15 years, studying how they perform with carrying weight and how they hold up under different weather conditions.

“Our expertise bringing to this project is being able to say here is one bridge in Nibley, Utah, where we're collecting some really great data — how can we extend that to all of the bridges across the United States and provide data to everyone?” Barr said.

With the sensors installed in the bridge, USU will be able to stream that data in real time.

“We will be able to monitor and see what's happening to that bridge at any period,” Barr said. “We want to be able to provide information to the engineering community as well so we can help them build better bridges.”

“Because Nibley doesn’t own any other bridges, the City Council was apprehensive about taking on the ownership and long-term maintenance and liability associated with this bridge,” Dustin said. “But we recognized the importance of a safe route to the new high school, and when the school district offered to build it if we would maintain it, we said yes.”