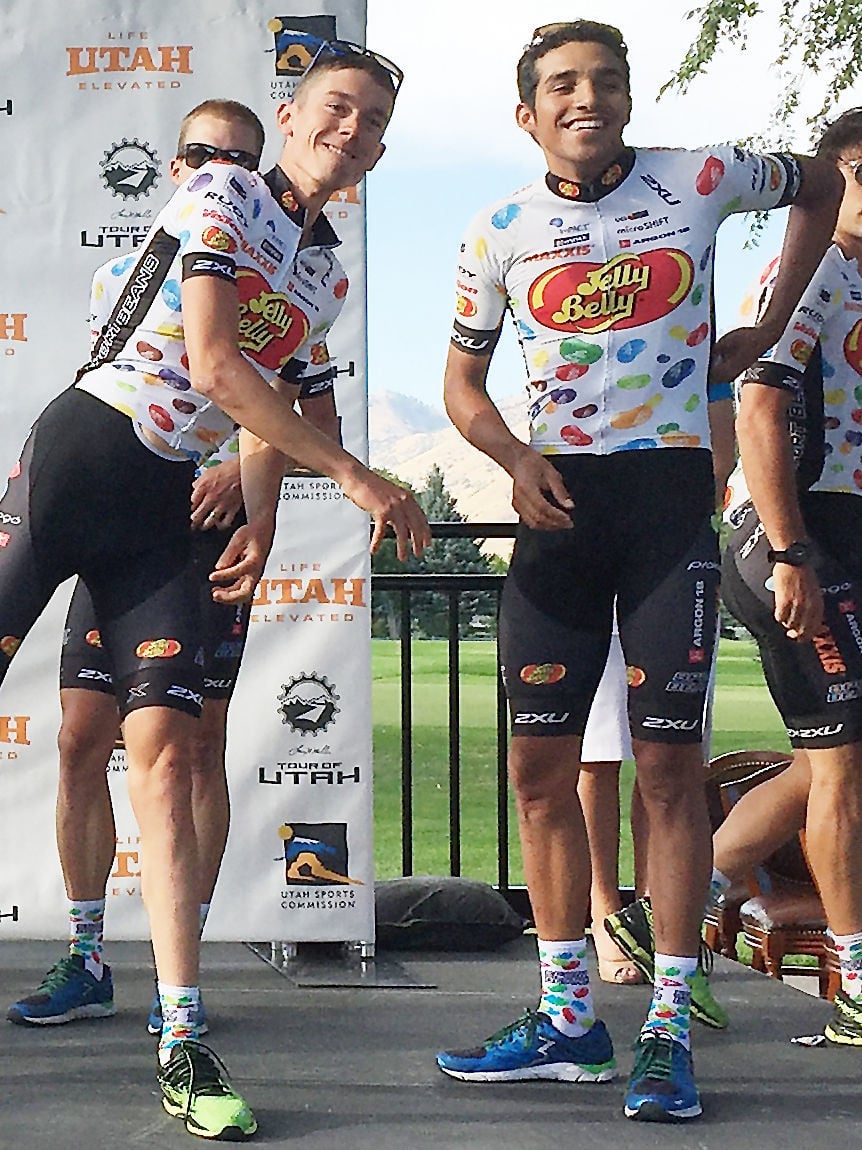 Cycling team members of Jelly Belly toss out candy to the crowd during a team presentation for the upcoming Larry H. Miller Tour of Utah that begins Monday in Logan. 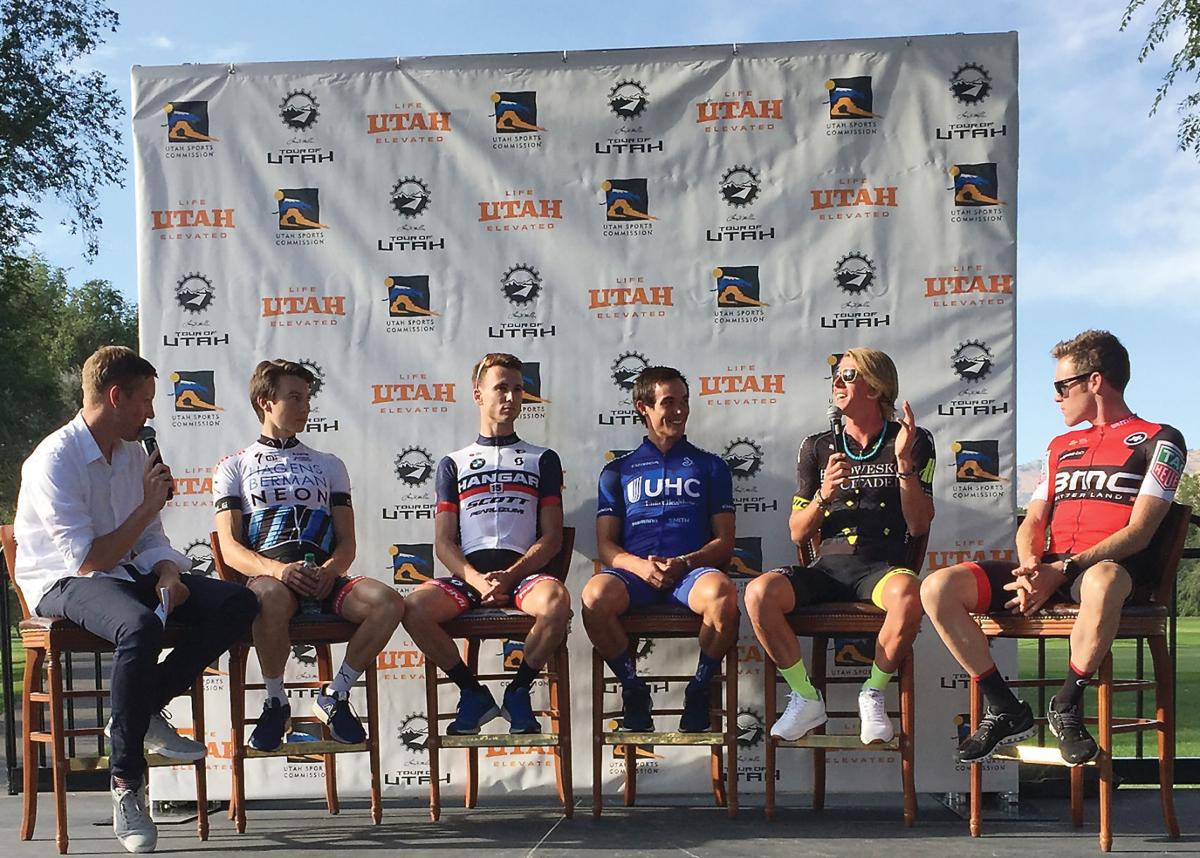 Cycling team members of Jelly Belly toss out candy to the crowd during a team presentation for the upcoming Larry H. Miller Tour of Utah that begins Monday in Logan.

As the Larry H. Miller Tour of Utah gets closer to getting underway for the 13th time on Monday morning in Logan, the public got a chance to rub shoulders with the riders Saturday evening.

All 126 professional cyclists from 16 teams and representing 23 countries were introduced at a meet and greet at the Logan Golf & Country Club. Cowbells and noise makers were handed out by some teams, while Jelly Belly tossed out small bags of the tasty candy that sponsors the team to the delight of many youngsters in the crowd.

“We are thrilled to be here in Logan again,” said Tour of Utah Executive Director Jenn Andrs. “We are excited about the support we get from this community. ... Logan is going to kick things off, and it’s going to be an amazing start. It really is going to be an incredible day of racing and I encourage you all to come out and watch on Monday.”

That’s when the riders will embark on the first stage of seven that will cover a total of 605 miles. Monday’s stage that starts at 8:35 a.m. on 100 E. 138 North and will be the longest of the seven at 132 miles. It goes up Logan Canyon, around Bear Lake, back through Logan Canyon and two laps on the east side of Logan before finishing where it started.

“This is an opportunity for you to showcase Logan to the world,” Andrs told the gathering. “This is for you as a community to celebrate. So, come and enjoy and watch the riders.”

Of the 16 teams, 10 are from the U.S., two from Italy and single teams from Albania, Spain, Israel and Canada. Team Novo Nordisk is made up of riders who all have diabetes. Several of the teams have direct ties to Utah in Hanger 15 Bicycles and Holowesko/Citadel Racing.

“It’s super righteous to be racing at home,” said T.J. Eisenhart, who is from Lehi and rides for Holowesko/Citadel. “... I’m always blown away when I ride here. The people are rad, the atmosphere is rad. It’s good vibes all the way around. ... I just love being home riding bikes around this great state.”

After the teams were introduced, five riders came onto a stage and talked about the upcoming TOU.

“That’s a hard act to follow,” quipped Brent Bookwalter of BMC Racing, who had to follow Eisenhart. “I’ve been coming to Utah for the past 10 years. ... You can’t beat being in the Utah mountains in the summer. We’re going to put on a good show.”

Climbing up Logan Canyon and riding the 50 miles around Bear Lake with possible cross winds, then returning through the canyon is certainly a good challenge to begin the 2017 race. This is the second time this stage has begun the TOU, as Logan played host in 2015. It rained that year, but weather conditions should be better this time around.

“The entire race looks hard,” said Nielson Powless, who rides for Axeon Hagens Berman and is the U.S. Under 23 Road Race champion. “You’ve got to be on your toes every day.”

The five on stage all joked some about winning the race, but there was some truth to the fun jabs as well.

“Everybody is here to win,” said Robert Squire, from Hangar 15. “For us from Utah, maybe more so. ... The course is a little shorter this year, so it should be more exciting.”

Travis McCabe, who rides for UnitedHealthcare Pro Cycling, has won a stage in the TOU before. The sprinter is hungry for more.

“Realistically, we want to win stages and are looking for the overall,” McCabe said, who is the U.S. Pro Criterium champion. “... Utah has spectacular scenery. I like racing here.”

The second stage will also use a part of Cache Valley for its course on Tuesday. Riders begin at Brigham City, climb into Cache Valley on U.S 89/91, turn and go through Wellsville and Mendon, before heading back to Box Elder County on Valley View Highway. This year’s TOU will finish in front of the Utah State Capitol in Salt Lake City on Aug. 6.

In addition to seven days of racing, there will be daily spectator activities and events. One hour prior to the race start each day, the Papa John’s Rider Sign-In and Autograph Alley allows fans to interact with the cyclists for photographs and signatures. All athletes will parade along a special walkway — Autograph Alley — where spectators will be allowed to interact with the professional athletes. Race announcers will interview athletes from the Sign-In stage, providing insights into the peloton.

Stage finish areas feature the Harmons Healthy Living Expo. Each interactive festival area serves as a gateway to the finish line every day. The Harmons Healthy Living Expo delivers an array of interactive exhibits, official Tour merchandise, concessions, and live entertainment, including jumbo television screens to watch the race unfold as it heads to the finish. Admission is free to the Expo, which will be located adjacent to the finish line in Logan and begin at 8 a.m.

The Sprint to the Finish Kids’ Bike Races presented by University of Utah Health are recreational bicycle races for children ages five to 12. This is an opportunity for children to ride their own bicycles on part of the course used by the pros. It is free to participate, once a parent or guardian has signed a waiver at the University of Utah Health tent in the Harmons Healthy Living Expo. Children must bring their own bicycles and helmets. This race will be at noon in Logan.