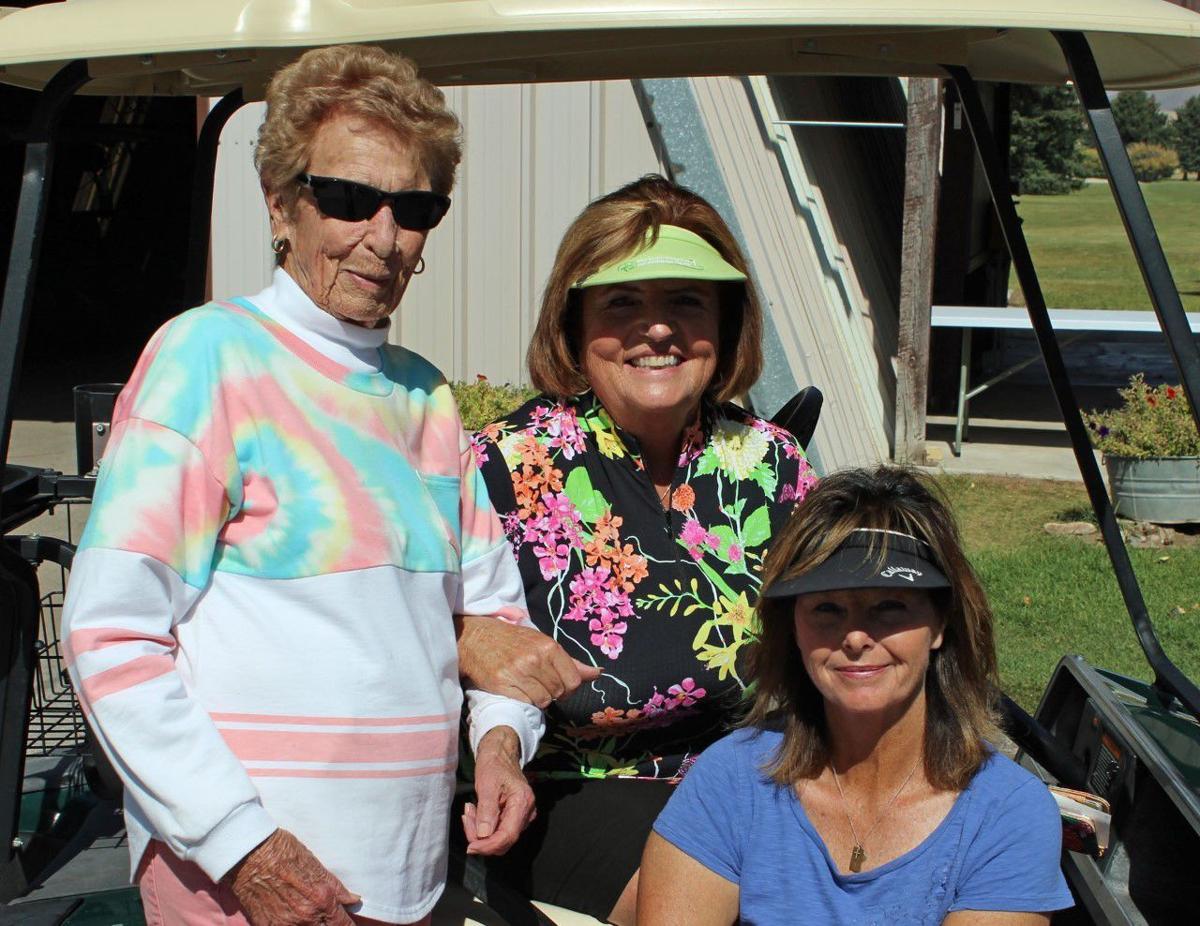 The two teams played together and keeping on the right ‘drive’ was sometimes a challenge. As they would ‘head ‘em up and move ‘em out’ down the fairway, they had eight ‘scattered’ golf balls to ‘cut out’ which ‘critters’ belonged to which team and which was their best ‘dogie’.

The team of Jana Hansen, Nola Jones and Cindy Raymond ‘wrangled’ the first three points into their ‘corral’ and galloped into the lead. The other team of Marsha Sortor, Linda Arnell, Connie Hymas and Pat Miller was able to ‘lasso’ in a couple of points and ‘ tie up’ another couple, but Jana, Nola and Cindy put their ‘brand’ on the day’s winnings. I ‘herd’ it was a ‘moo’velous day!

On Wednesday, September 30, spirits were ‘high’ as nine women came to participate and enjoy the final official Ladies’ Day of this year. It was a beautiful, slightly cool, autumn day that was ‘heaven’ly for playing golf. They split into three teams and played a regular scramble.

Is it a balloon? Is it a plane? No, it’s Jana Hansen. Jana went ‘soar’ing on hole five after hitting a 164 yard drive from the tee box; followed by a 154 shot onto the green and into the cup for an ‘Eagle’ for her team. Her feet may not touch the ground until we meet again in the spring! Jana also’ flushed’ a ‘birdie’ on another hole. Jana was definitely a ‘force’ to be reckoned with ‘boost’ing herself and her team mates Polly Dahlke and Suzi Sneddon into first place with their score of 33 as well as skying up’ the final Chip-In Pot with her eagle shot. Congratulations Jana on a ‘super-sized’ day of golf! Cindy Raymond, Rachel Tarbet and Marsha Sortor flapped their ‘wings’ hard to get a 40 and ‘perch’ on second place. Connie Hymas, Pat Miller and Linda Arnell felt like ‘ducks’ with their 44, but they had a ‘quack-up’ time over Pat’s new Kleenex – you’ll have to ask her ‘cause I’m not telling!

It’s been a summer (and year) of uncertain times, but we know that blue skies, sunshine, green grass, great management and workers at the Montpelier links, friendship with each other and the great game of golf have helped us to cope and made it a summer to remember. See you next year – and stay safe!