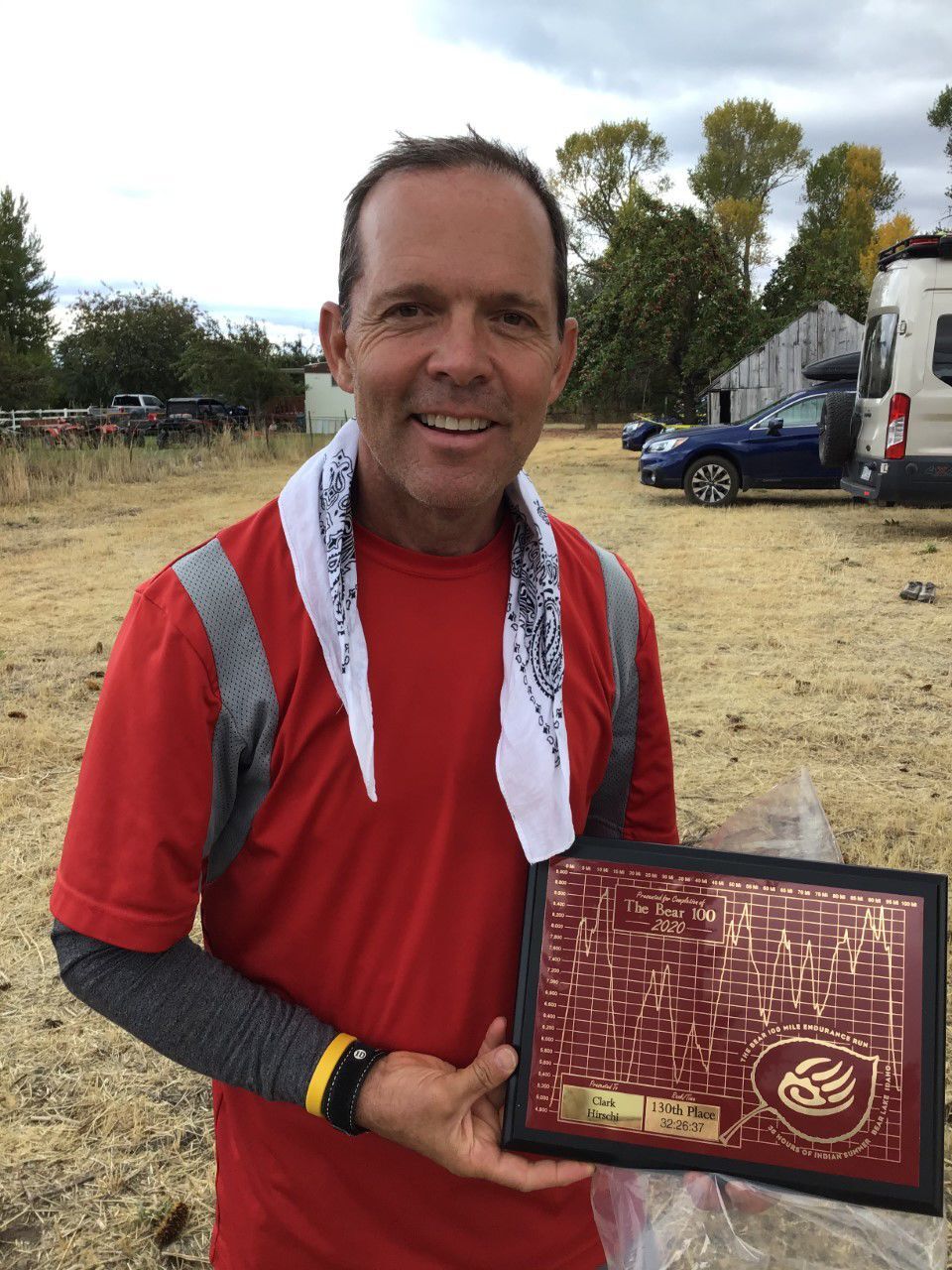 Clark Hirschi one of the runner’s in the 22nd annual Bear 100 endurance race. 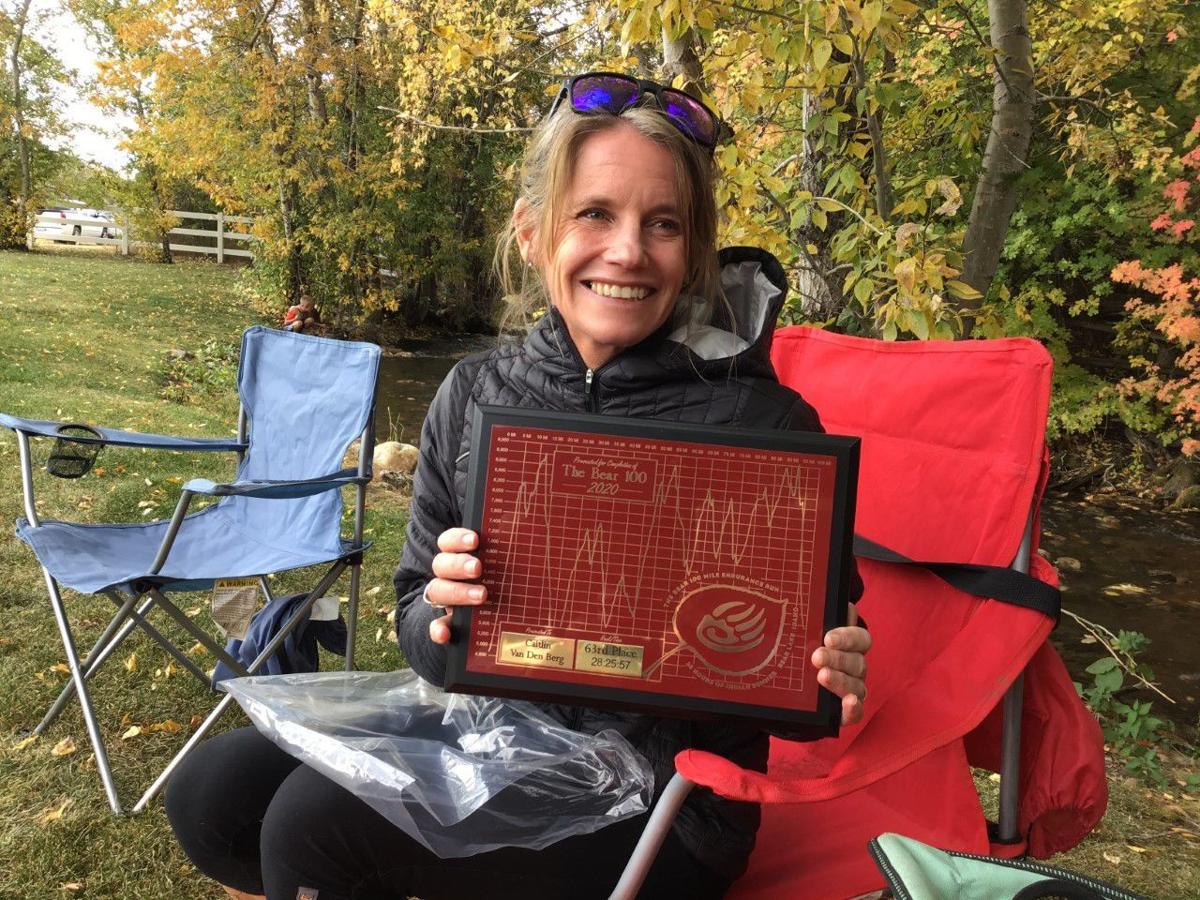 Caitlin Van Den Berg’s 63rd place finish re-energized her enthusiasm and she plans to be at the start of “The Bear” in 2021. 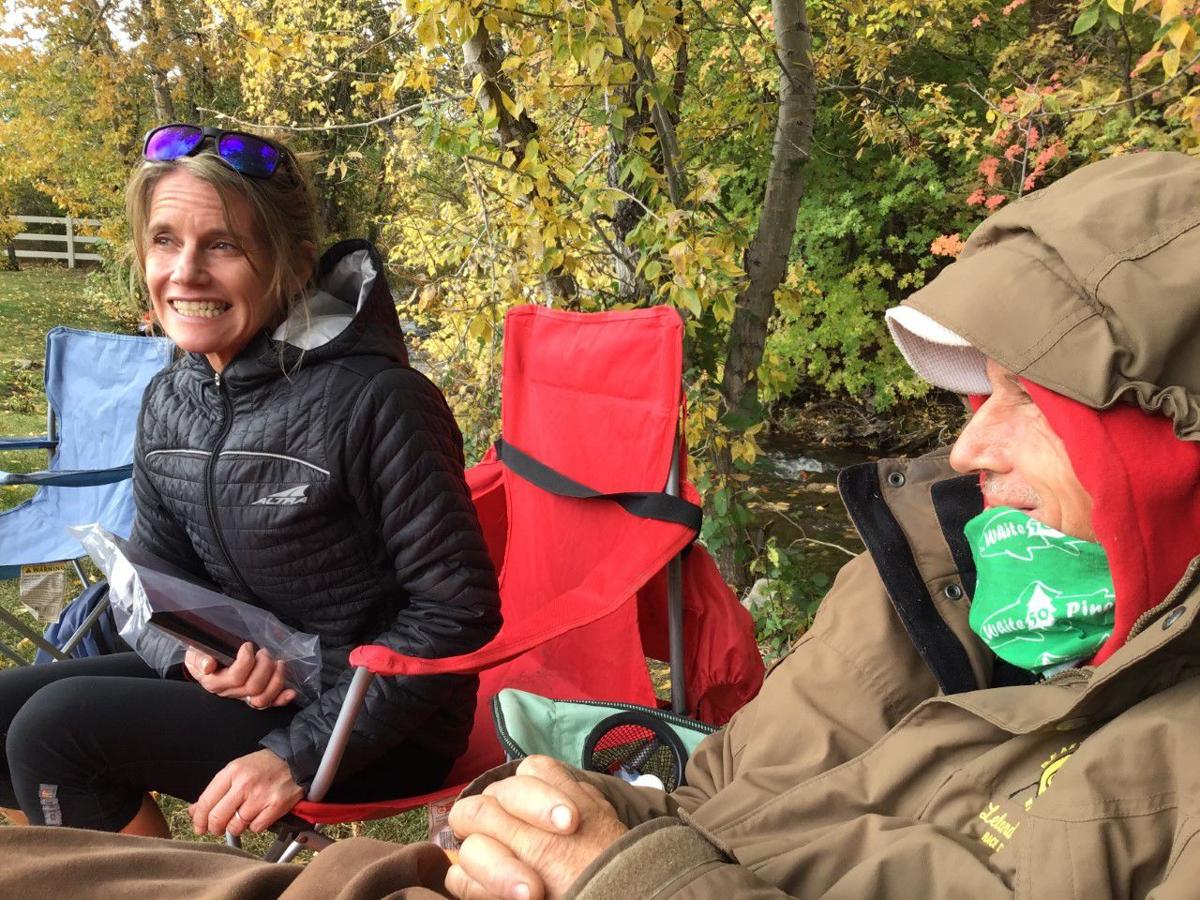 Clark Hirschi one of the runner’s in the 22nd annual Bear 100 endurance race.

Caitlin Van Den Berg’s 63rd place finish re-energized her enthusiasm and she plans to be at the start of “The Bear” in 2021.

Saturday afternoon, a group of curious onlookers learned about the Bear 100 Endurance Race from Clark Hirschi, a Bear Laker through his family’s genealogy, who proudly displayed a plaque commemorating his 130th place finish in the Bear 100 with a time of 32 hours, 26 minutes and 37 seconds. In a departure from the norm of other years for the Bear 100, this year’s race produced “runner weather” and allowed more participants to complete the run within the 36-hour qualifying requirement. Those hardy souls who completed the race (one hundred fewer than the 307 who started) were greeted with cheers and a jolt of protein along Fish Haven Canyon at an idyllic spot owned by JoAnn Andersen and her late husband, Vernon, on the edge of Fish Haven Creek. The finish line banner oversaw 207 determined people who successfully completed the race before the 6:00 p.m. deadline, having begun the race one hundred arduous miles earlier at the mouth of Logan’s Dry Canyon. Runners set off at 6 a.m. on Friday morning to test their mettle against mountain terrain over some of the roughest trails in northern Utah and southeastern Idaho. The course challenges participants by cresting four times over 8,800 feet in elevation then dipping to less than 5,800 feet three times—and the majority of those knee-cracking elevation swings are in the first 45 miles. Add the recent windstorm which laid trees in the race path and the brutal conditions prevented many from obtaining their hoped-for finish times.

One intrepid individual who met and beat his goal was Leland Barker, 62 year old race organizer. Barker hoped to come in under 27 hours and he made that with a mere four seconds to spare. Huddled in a blanket and hooded winter coat, Barker greeted other runners near the finish line while gamely chatting about his 22 year old dream to produce a fast-paced and demanding 100 mile run. He recalled the initial race that commenced at Deer Cliff, the year a youngster of 15 ran then speculated the 70 year old who entered this year would best the 36-hour deadline as well. Among those breathlessly thanking Barker for his dedication to the race, Caitlin Van Den Berg’s 63rd place finish re-energized her enthusiasm and she plans to be at the start of “The Bear” in 2021.

Barker and now-co-organizers, Doug Garrett and Ron Stagg, wait-listed more than 200 entries in 2020 and had what Barker termed “a manageable 350 entrants”, a far cry from the race’s first year when there were 17 entries and 14 finishers. Now in its 22nd year, the Bear 100 presents a much-anticipated trial for prepared racers who routinely endure extreme weather and grueling race conditions with the support of 14 aid stations. Michelle Hansen, Aid Station Coordinator, helped supply food, medical supplies and gathered volunteers, including those at race end where Fish Haven’s Eldon Kearl performed radio duty and Ed Izatt, an EMT with Bear Lake County’s Ambulance Service, encouraged hydration, protein and warm clothes for runners on Saturday afternoon while two buses from Ogden School District, spectators and family awaited the last 27 runners to come into view along picturesque Fish Haven Canyon. The Bridgerland Amateur Radio Club, manned by approximately 100 people either on the route or from radios located in Logan, Franklin, Preston and across Cache Valley, tracked entrants’ check-in or -out at each stop and distributed data allowing families and friends to electronically gauge their runner’s progress throughout the two-day ordeal. A forgiving and unforgettable Barker commented that, “Not everyone has to be a runner,” as one listener quietly confessed she was not among those in the contest. For more information about the annual race, go to Bear100.com.