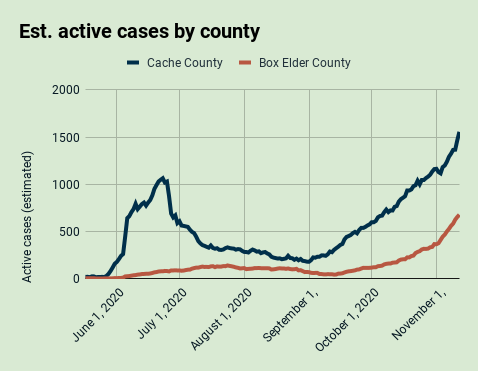 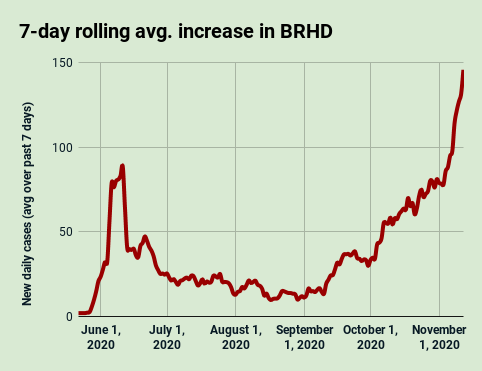 Nov. 12 and the six days prior averaged 146 newly reported COVID-19 cases a day in the Bear River Health District.

Nov. 12 and the six days prior averaged 146 newly reported COVID-19 cases a day in the Bear River Health District.

While the number of new, lab-confirmed COVID-19 infections has been rising at an accelerating rate since schools reopened, June 5 and 6 held onto the record with nearly 200 cases each. Those infections were detected at a targeted testing clinic at an outbreak in a Hyrum meatpacking plant during the first wave of the virus in Cache County.

Residents can probably expect to continue to see dramatic increases in COVID-19 statistics as the state of emergency declared in Utah on Sunday include measures to rapidly ramp up testing among young people, who are more likely to carry and spread the virus without ever showing symptoms.

Despite the recent surge, deaths in the district remain relatively low. The deaths of 20 people listing permanent addresses within the three-county district have been attributed to COVID-19: 12 from Cache and 8 from Box Elder County. The number of reported deaths has not increased since Nov. 4.

While day-to-day COVID-19 numbers can fluctuate for a number of logistical reasons, the 7-day average of new cases has also been rising sharply. For Thursday and the six days prior, an average of 146 new cases were reported each day, up from an average of 88 new cases for the comparable period ending last Thursday.

Box Elder's recent increases mean it's starting to account for a larger share of the district's active cases. On Oct. 1, Box Elder accounted for 16% of active cases in BRHD while 82% were from Cache. By Thursday, Box Elder had 30% of the active cases to Cache's 69%.