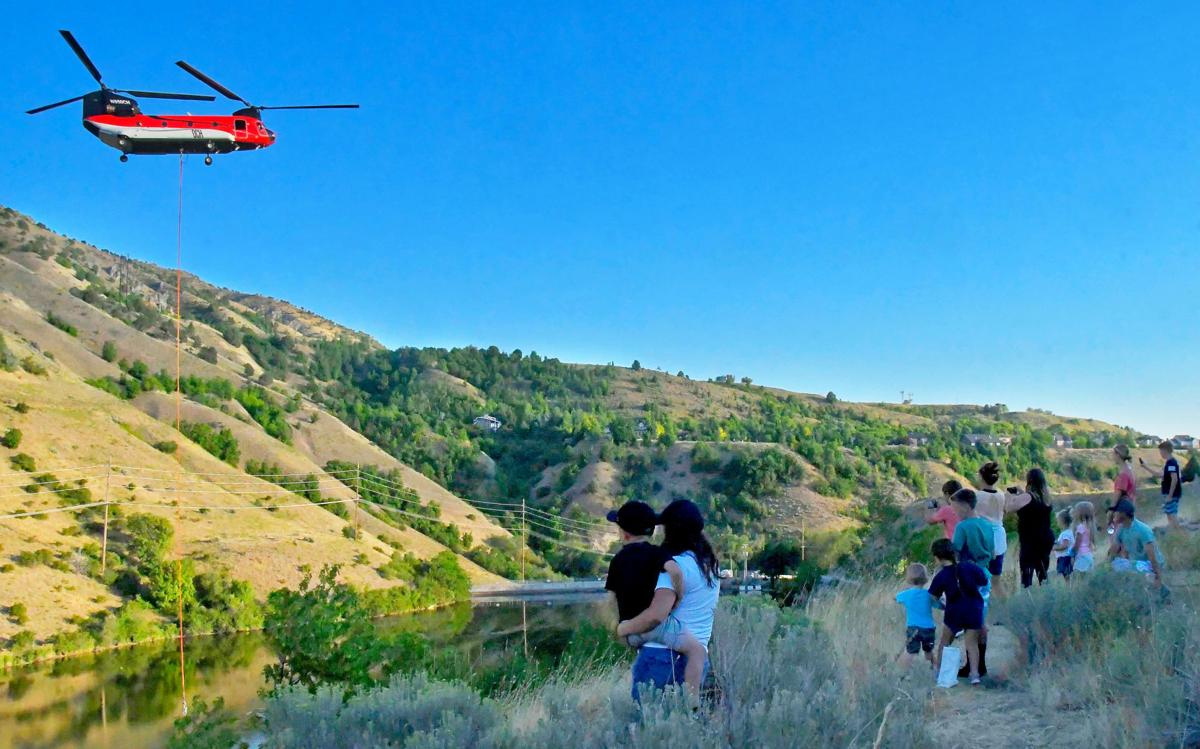 People gather to watch a Chinook helicopter get water out of First Dam to fight a fire in Card Canyon on Sunday evening. 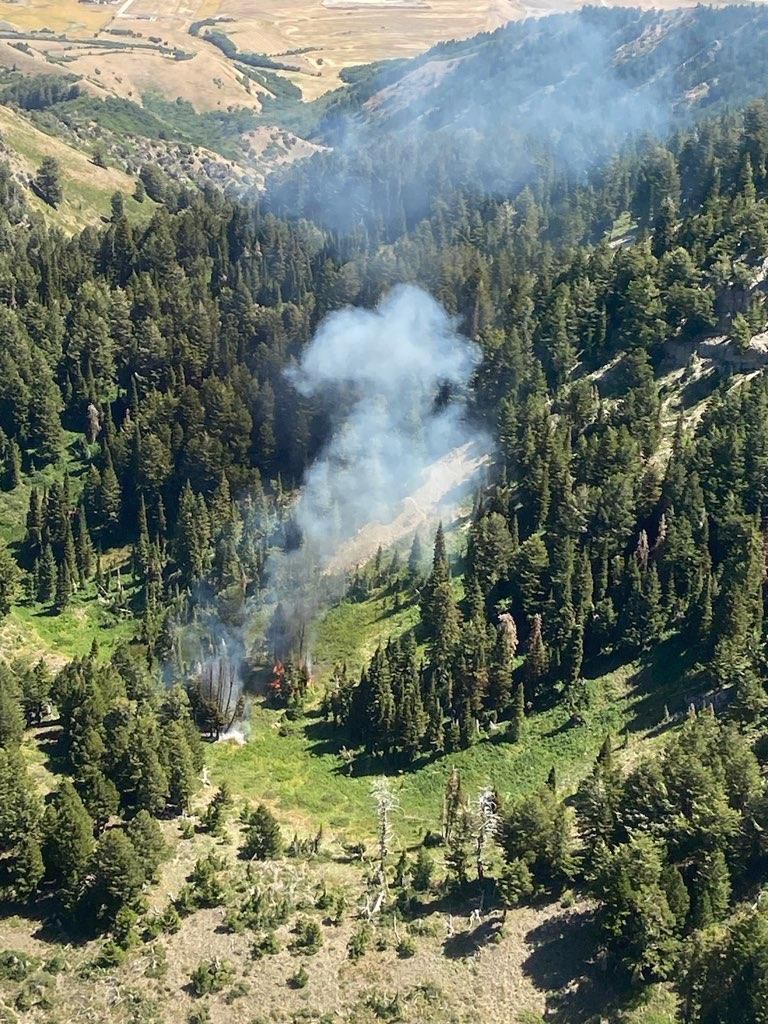 Smoke rises from a fire in the Wellsville Mountains on Sunday. 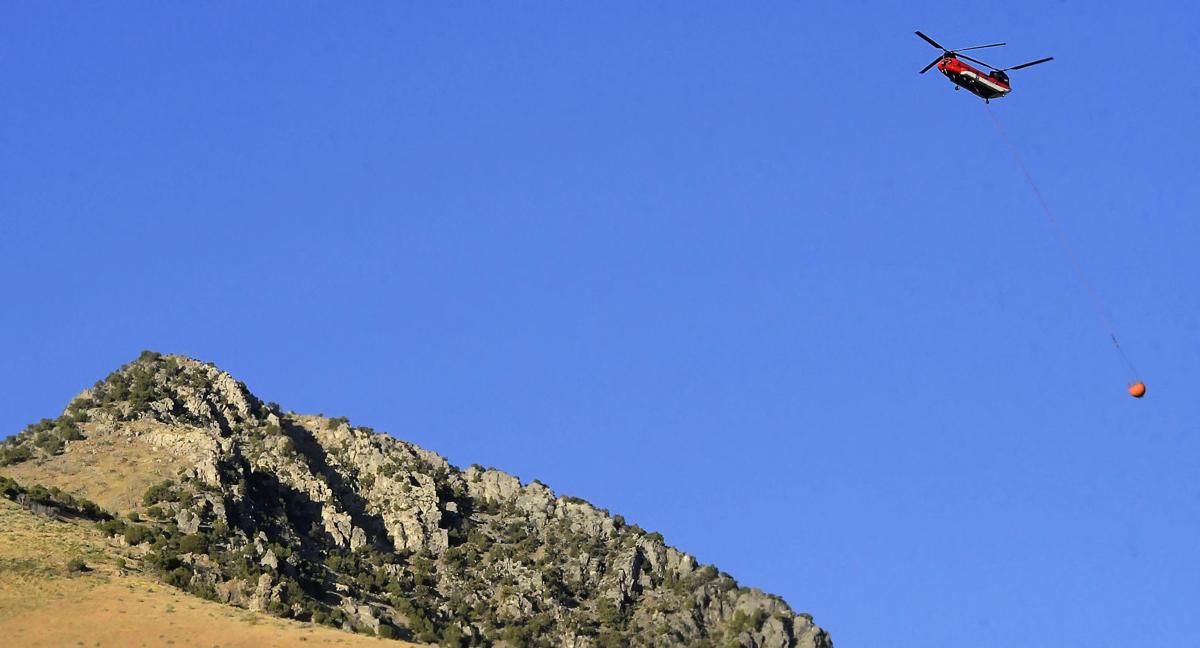 A Chinook helicopter gets water out of First Dam to fight a fire in Card Canyon on Sunday evening.

People gather to watch a Chinook helicopter get water out of First Dam to fight a fire in Card Canyon on Sunday evening.

Smoke rises from a fire in the Wellsville Mountains on Sunday.

A Chinook helicopter gets water out of First Dam to fight a fire in Card Canyon on Sunday evening.

Wildland fire crews continued to battle blazes Monday on both the east and west sides of Cache Valley.

The first of the fires, believed to be human caused, erupted in Card Canyon east of Logan late Sunday afternoon. The second fire, caused by a lightning strike, was located on the Box Elder County side of the Wellsville Mountain Wilderness Area.

The Card Canyon fire was reported 80% contained as of 5:30 p.m. Monday after charring roughly 3 and a half acres of juniper forest. A crew of about 60 firefighters was ultimately sent to work on the blaze, assisted by two helicopters dropping buckets of water and six fire engines.

U.S. Forest Service Service representative Kathy Jo Pollock said only one crew would be left at the scene overnight.

First Dam was evacuated Sunday afternoon to make room for the helicopters to fill their buckets, but the dam was reopened to the public Monday once a portable pool or “pumpkin” was set up for the operation.

An online update posted by the Forest Service characterized the blaze as human-caused, and a fire investigator was sent to the scene, but no findings have been reported.

The fire was not far from the Card Canyon summer homes, raising some concern for their safety, but no homes were directly affected, Pollock said. She added that the summer homes in the Chokecherry area were not in range of the fire.

Though the fire in the Wellsvilles was highly visible from much of Cache Valley, it covered only a quarter of an acre and was reported 100% contained and controlled by 3 p.m. Monday.

A crew was brought in by helicopter to fight the fire, a procedure that required special permission because it was in a designated wilderness area.

The crew, now off the mountain, was using Minimum Impact Suppression Tactics, which are officially designated procedures for environmentally sensitive areas. These include building less invasive fire lines and allowing fires to burn to natural barriers.

The fire in the Wellsvilles is being attributed to lightning “hold over” from a storm that came through several days ago. The helicopter used on the fire was dipping water out of a pumpkin set up at Wellsville Elementary School.

Last month, a wildfire in the mountains near Hyde Park burned an estimated 100 acres. Officials suspect the fire was caused by someone shooting exploding targets for firearm practice. Due to dry conditions, a fire restriction order is in place in unincorporated Box Elder, Cache, Rich and Weber counties prohibiting open fires outside of sites such as improved campgrounds, smoking in outdoor areas with dry vegetation, use of fireworks, exploding targets or tracer ammunition, and other activities.

There are no fire restrictions in the Uinta-Wasatch-Cache National Forest, but officials have cautioned people to be careful and put out campfires thoroughly.