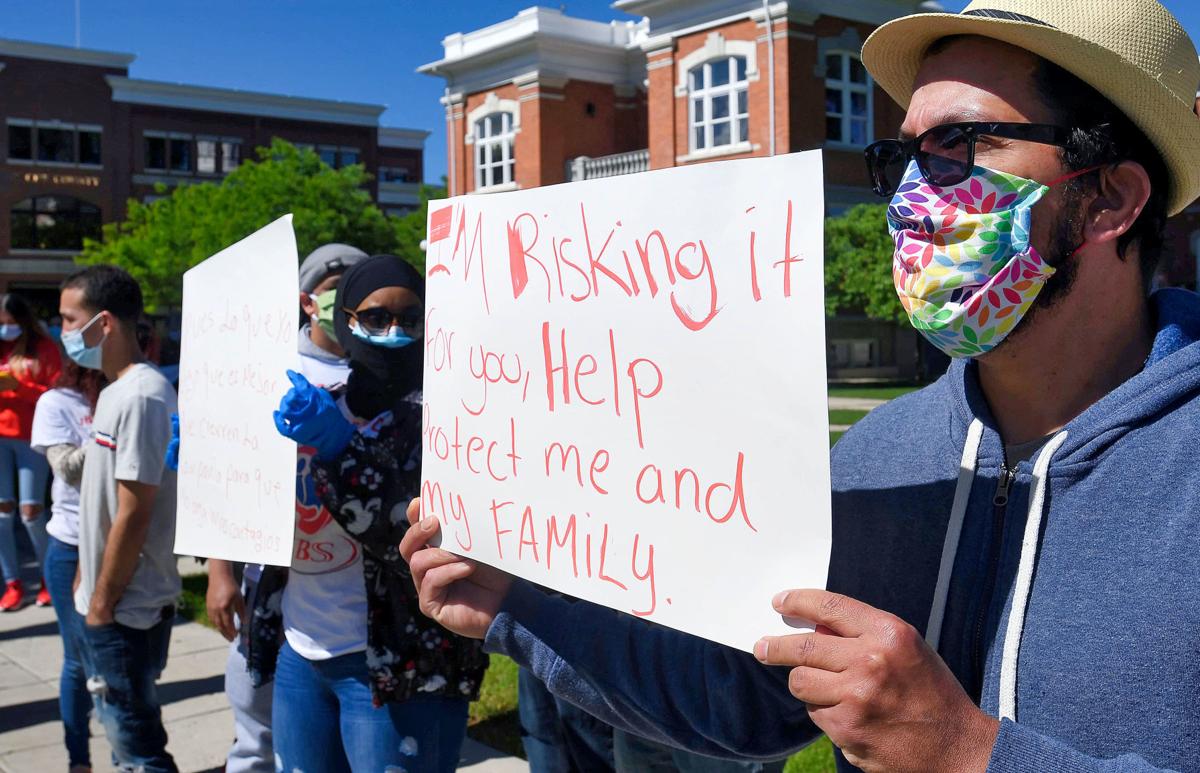 Rafael Mojica and other JBS workers protest on Main Street in Logan, Utah, on Tuesday. Hundreds of workers at the meatpacking plant in Hyrum, Utah, have tested positive for COVID-19. 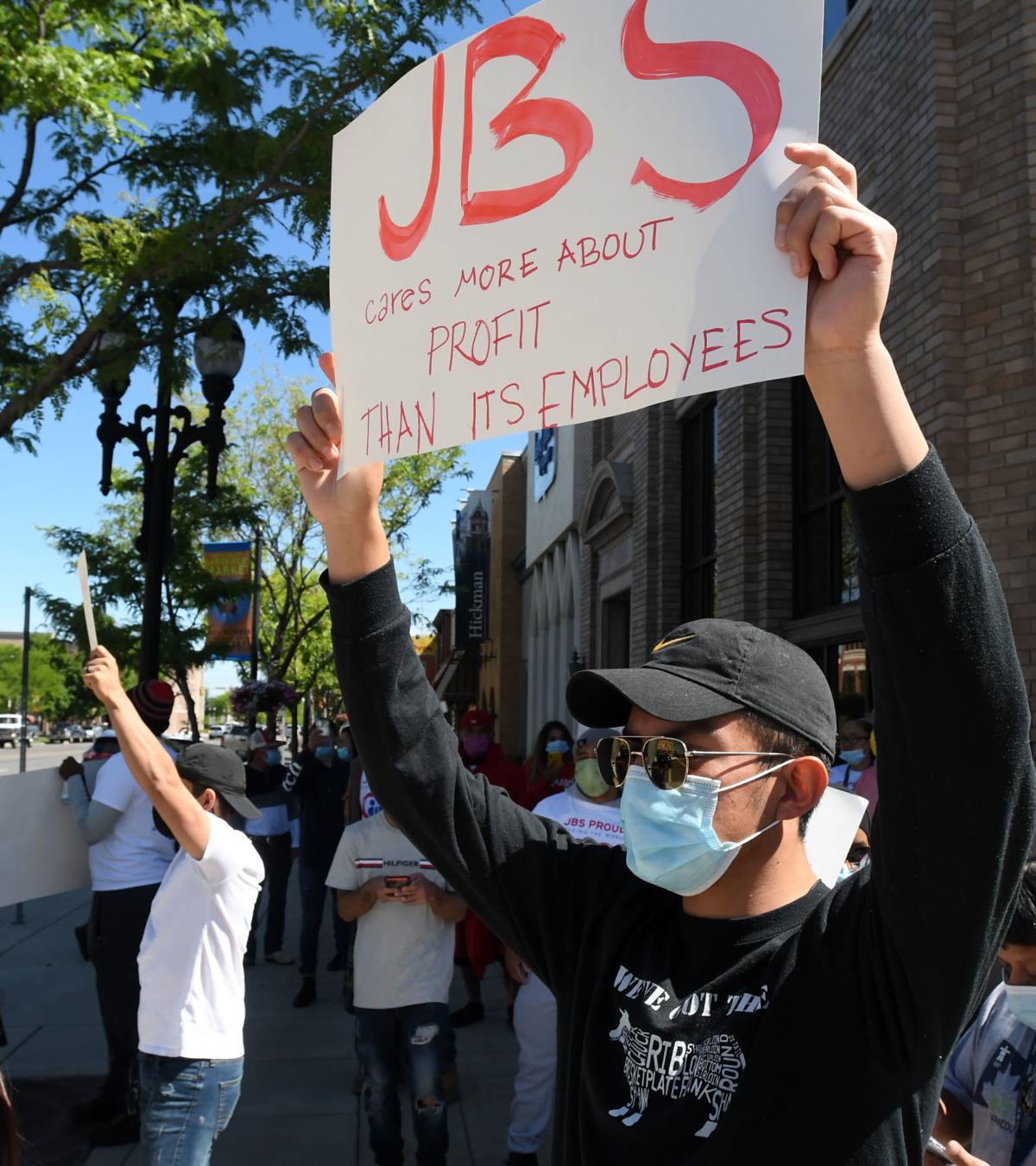 Brian Galindo and other JBS workers protest on Main Street in Logan on Tuesday. Hundreds of workers at the meatpacking plant in Hyrum have tested positive for COVID-19.

Rafael Mojica and other JBS workers protest on Main Street in Logan, Utah, on Tuesday. Hundreds of workers at the meatpacking plant in Hyrum, Utah, have tested positive for COVID-19.

Brian Galindo and other JBS workers protest on Main Street in Logan on Tuesday. Hundreds of workers at the meatpacking plant in Hyrum have tested positive for COVID-19.

This story was initially published at 12:15 p.m. and updated throughout the day to include additional info.

Several workers from the JBS meatpacking plant in Hyrum and their supporters gathered in Logan on Tuesday to protest the company’s handling of a coronavirus outbreak with nearly 300 confirmed positives.

After about 100 employees walked out of the JBS parking lot earlier Monday morning, around 50 people met at the Historic Cache County Courthouse and marched a block south and back before holding their signs toward Main Street.

That same employee said it seemed like JBS was handling the coronavirus pandemic responsibly at first, but that’s changed.

Several of the protesters had the same message: Shut JBS down long enough to clean workspaces and make sure people can work there without spreading the virus. While JBS is still operating, from Monday through Thursday, individual departments were not scheduled to work some days. A person familiar with the matter told The Herald Journal that JBS has stopped taking in new cattle for the time being and is only processing the cattle they have on-site.

In response to the protest, JBS spokesperson Nikki Richardson stated the company is following all CDC and OSHA-issued guidance regarding social distancing. Workers who tested positive on May 30 will be back at work on Wednesday as long as they don’t have symptoms, “which is in alignment with guidance from the CDC that states people who test positive should quarantine for 10 days, including being asymptomatic for 72 hours.”

“No one is forced to come to work, and no one is punished for being absent for health reasons,” Richardson stated. “If any team member is fearful of coming to work they can call the company and inform us, and they will receive unpaid leave.”

While Richardson states JBS Hyrum requires sick employees to stay home from work and that the company has hired staff to help ensure COVID-19 precautions are in effect, several sources have told The Herald Journal that some employees and supervisors have been told contrary to JBS policy to keep coming to work after testing positive for COVID-19, or even if they’re feeling sick but haven’t tested positive.

Another worker said they felt like the company was endangering employee’s health with a lack of communication.

“I have kids, I can’t pass that on,” the employee said. “And the company doesn’t care enough until, what, they’re burying their employees? And they’re talking about a bonus that, what, they’re going to put toward our funeral?”

The worker said it’s disheartening to know that Latinos accounted for much of the spread of the virus in Cache County. The Bear River Health Department last released demographic data more than a week ago showing about 40% of confirmed cases in the health district are Latino residents while just more than 20% of the cases involve white residents — and that was before the bulk of results had been reported from the clinic at JBS, where many workers are Latinos. Advocates worry that existing health disparities, higher likelihood to work in “essential” industries and less information from health officials in Spanish may all put Latinos at higher risk of contracting or developing serious symptoms from the virus.

Rumors of JBS workers sick with coronavirus have been circulating for weeks. When asked for a response to those earlier rumors, the company states it does not comment on numbers of positive cases among any of its employees but did offer a list of several precautions at the plant. The temperature of every worker is taken before every shift, JBS states, workspaces have been modified where feasible with plexiglass barriers and more distance between employees, and workers are given personal protective equipment like masks and face shields.

Despite those precautions, the Bear River Health Department said Monday that 287 samples taken at a “targeted” testing clinic at a meatpacking plant came back positive. While health officials have not said where that clinic took place, several sources have told The Herald Journal that a clinic tested all or nearly all employees at JBS in the same timeframe.

A post on the Facebook page “Noticias de Logan,” appearing to be from an administrator on Tuesday, stated that despite recent criticism, the outbreak is far from entirely the fault of JBS. Due to medical privacy laws, the company only knows whether an employee has tested positive if the employee tells them, the post states. Other food processing plants, including Lower Foods and Pepperidge Farm, as well as Intermountain Healthcare “and many more are in the same situation,” the post states. And the company isn’t forcing anyone to work — if you’re sick, listen to your conscience and stay home, the post states, and if you don’t like working at JBS, get another job.

One former employee who quit JBS due to safety concerns even before the coronavirus outbreak said they believe much of the problem lies not with the owners but with supervisors and management who ignore employee concerns.

Before the protest, about 100 workers gathered in the plant’s parking lot at about 5:30 Tuesday morning before walking away from a scheduled day of work. Employees who test positive may stay home with pay, but the company has told workers they’d be paid 32 hours for two days of work this week plus overtime on Saturday. But Tuesday’s protesters weren’t willing to take the risk and walked away from that pay.

The testing clinic at JBS gathered samples from workers more than a week ago, but before test results came back, employees were told to keep coming to work unless they had symptoms, according to several sources.

Two of the workers The Herald Journal spoke with on Tuesday said they hadn’t yet received their test results. Those employees said last week, people would be pulled off the line in the middle of a shift, the workers believed because they had tested positive.

Liz Villegas, an advocate in the Latino community, said after the early-morning walkout of the JBS parking lot didn’t garner as much attention, organizers wanted to make sure workers had a voice and channeled their energy into the protest.

While many employees are part of United Food & Commercial Workers International Union, Villegas said things like organizing and protests are very new to the most workers.

“It is very new,” Villegas said. “In the Latino community it’s not something we do very much.”

One worker said they came to the protest because of the energy during the walkout.

“There was almost 100 people outside with me on the same page,” the worker said. “JBS needs to close down until it’s fully cleaned, fully protected. They need to keep in mind that we have families to support. They just can’t be throwing work days to the left and to the right. We need our 40 hours, or we need to work something out with the company.”