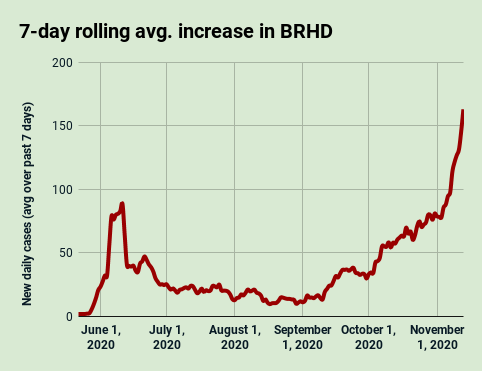 Nov. 13 and the six days prior averaged 163 newly reported COVID-19 cases a day in the Bear River Health District. 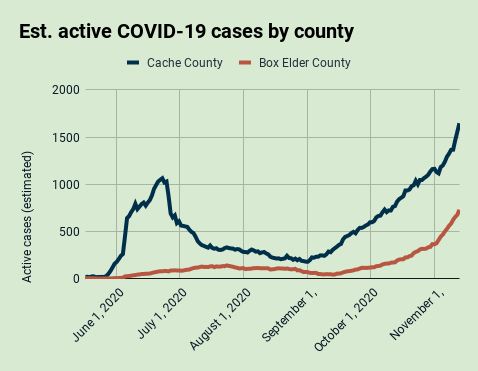 Nov. 13 and the six days prior averaged 163 newly reported COVID-19 cases a day in the Bear River Health District.

The Bear River Health District continues to report newly confirmed COVID-19 cases at an accelerating rate, with more than 200 cases reported both on Friday and Thursday.

There were 252 new test positives on Friday and 208 on Thursday. Friday's numbers bring the 7-day rolling average up to 163 new cases reported daily. The 7-day average is up from 95 for the period ending last Friday, and 76 the week before that.

Most of Friday's new cases in the three-county district were reported from Cache County, with 180, while Box Elder reported 70 new cases and Rich County reported 2.

Cache, Box Elder and the district as a whole set records for new cases on Friday.

Two new deaths were reported among people listing permanent addresses in Box Elder County, bringing the total number of deaths attributed to COVID-19 in the district to 22. Hospitalizations remain about the same, with 10 novel coronavirus patients in Cache County hospitals and 8 in Box Elder.

Box Elder's recent increases mean it's starting to account for a larger share of the district's active cases. On Oct. 1, Box Elder accounted for 16% of active cases in BRHD while 82% were from Cache. By Friday, Box Elder had 31% of the active cases to Cache's 69%.