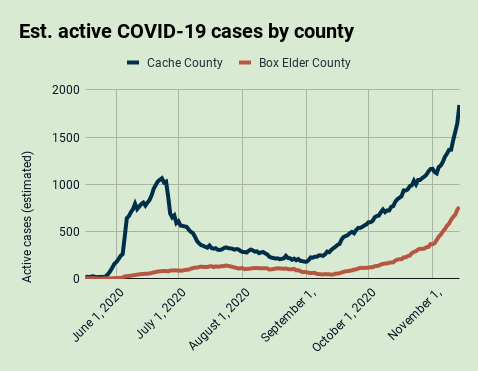 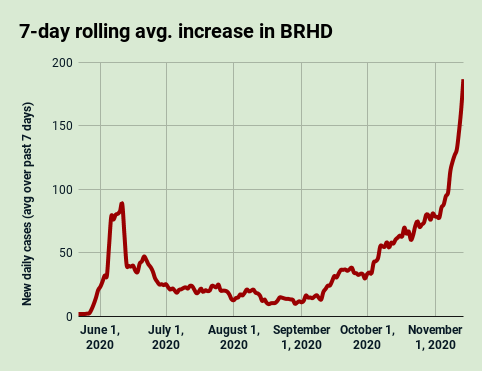 Nov. 14 and the six days prior averaged 187 newly reported COVID-19 cases a day in the Bear River Health District.

Nov. 14 and the six days prior averaged 187 newly reported COVID-19 cases a day in the Bear River Health District.

A backlog of COVID-19 reports that originally didn't list county data were reported Saturday, artificially inflating some already high numbers in the Bear River Health District and statewide in Utah.

BRHD reported 305 new coronavirus cases within the three-county district, but 65 of those were from the backlog of cases over the past couple of weeks.

"Due to a large influx of tests missing county data, these cases, while contacted by BRHD the date they occurred, were not reported previously in case counts," BRHD.org states. "Each record has now been updated with county data so it can be represented in our totals shown below."

The three-county district has reported an average of 187 new daily cases over the past week. As of Saturday, there were an estimated 2,611 active cases in the district: 1,840 in Cache, 762 in Box Elder and 9 in Rich.

The Utah Department of Health reported 5,352 new cases on Saturday, which is also artificially high because it includes about 1,300 cases that should have been reported on Thursday but weren't due to technical difficulties. The rolling 7-day average statewide is 2,957 new cases a day, or about 24% positive results from all tests performed.

Eighteen people are hospitalized with COVID-19 in BRHD, and 487 statewide. The district is still reporting 22 deaths attributable to COVID-19 among people listing permanent addresses within the three counties.