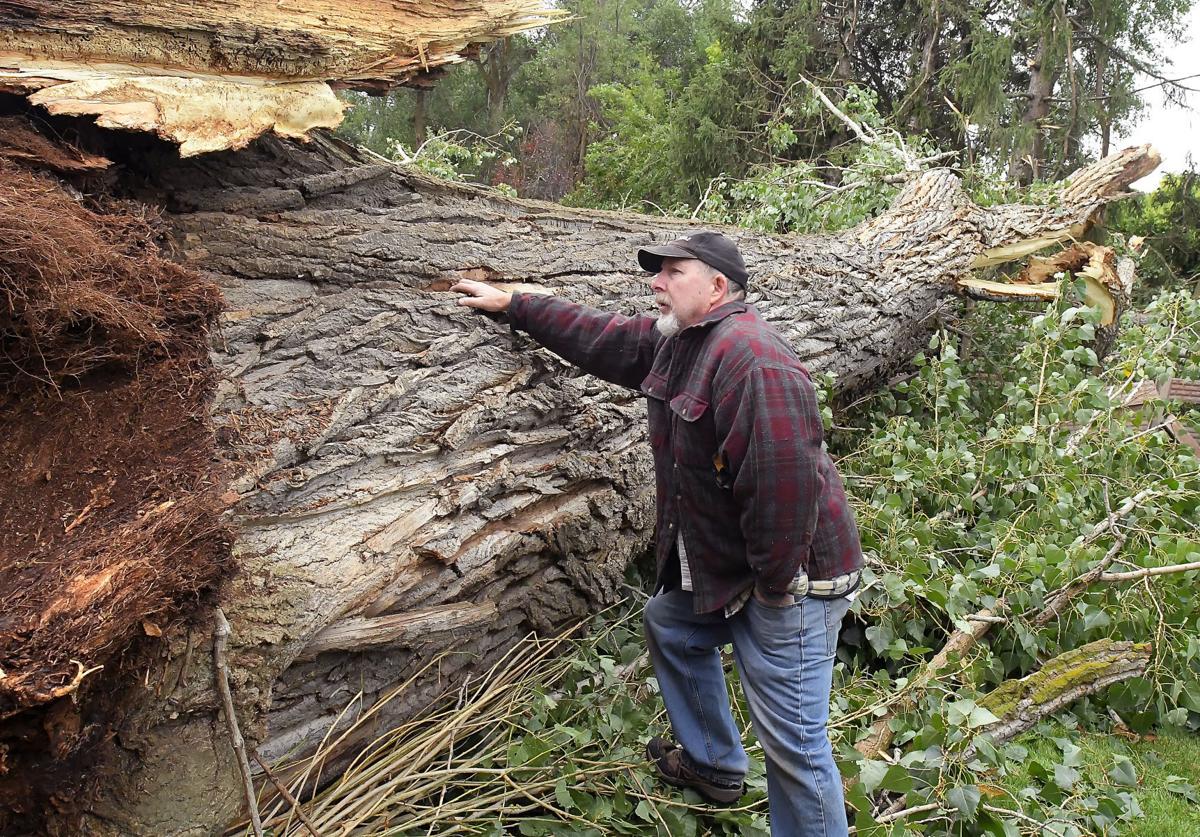 Dee Chugg looks over a cottonwood tree that blew down in high winds on Tuesday, Sept. 8, 2020, in Providence, Utah. (Eli Lucero/Herald Journal via AP) 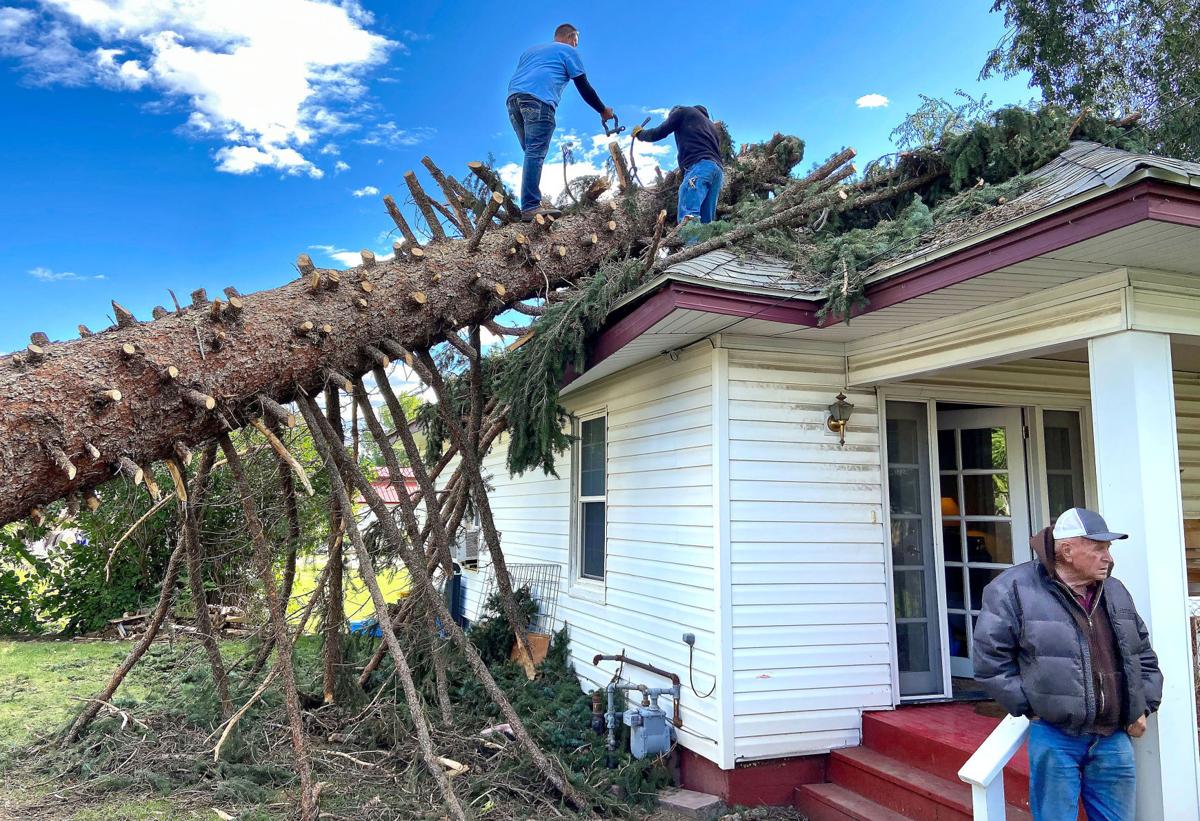 Clark Parker stands outside his home as Colby Hunter and Kyle Smith remove a tree that fell on the roof on Tuesday in Paradise. 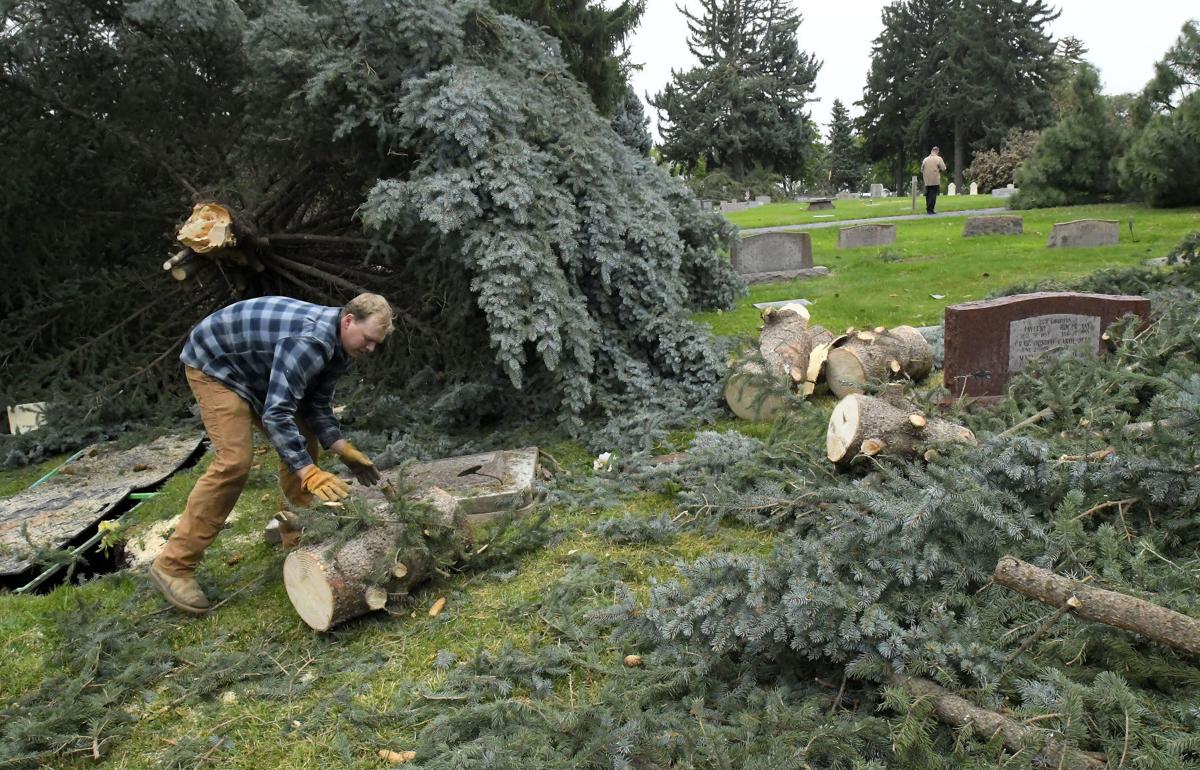 Braxton Wood cleans up a fallen tree in the Hyrum Cemetery on Tuesday where a funeral is scheduled to happen later in the day. 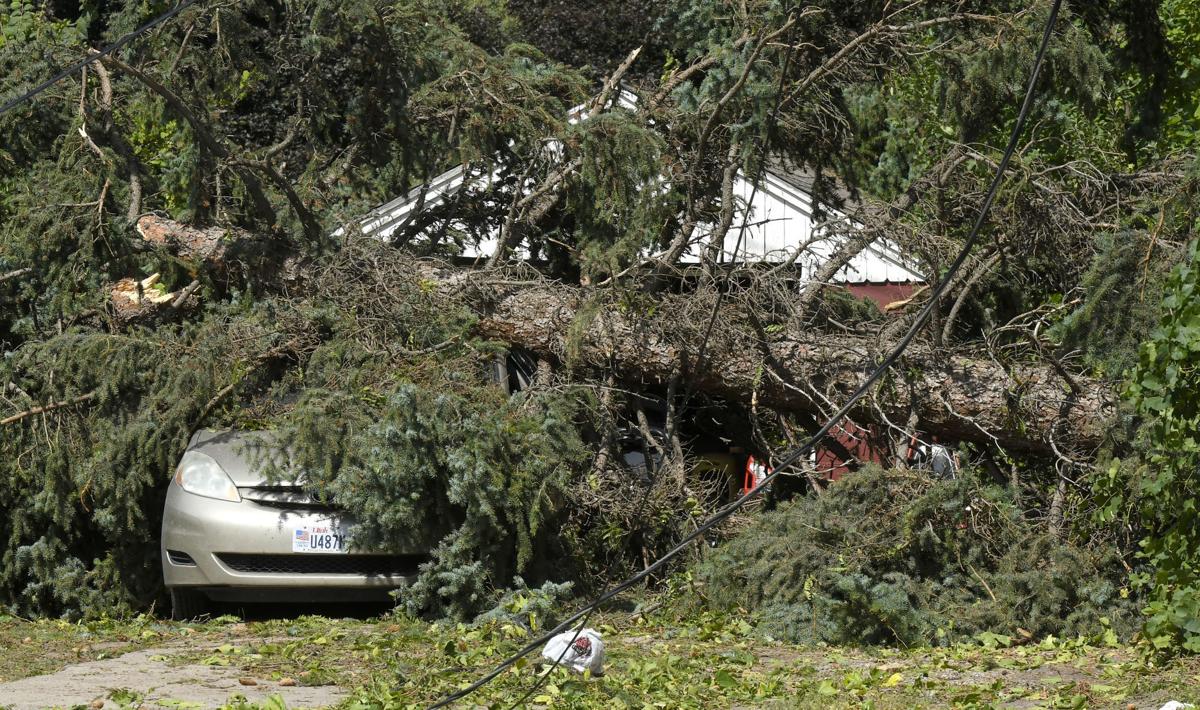 A tree rests on top of a car in Hyrum on Tuesday.

Dee Chugg looks over a cottonwood tree that blew down in high winds on Tuesday, Sept. 8, 2020, in Providence, Utah. (Eli Lucero/Herald Journal via AP)

Clark Parker stands outside his home as Colby Hunter and Kyle Smith remove a tree that fell on the roof on Tuesday in Paradise.

Braxton Wood cleans up a fallen tree in the Hyrum Cemetery on Tuesday where a funeral is scheduled to happen later in the day.

A tree rests on top of a car in Hyrum on Tuesday.

High winds from an overnight storm left thousands of Cache Valley residents cleaning up debris or without power in the following hours and days.

Rocky Mountain Power reported nearly 13,000 affected customers in the Cache Valley and Bear River Valley areas, which doesn’t include public utilities like the Logan and Hyrum light & power departments, on Tuesday. More than 9,000 outages were listed in Cache County as of 9 a.m., most of them in the south end of the valley.

Debris from downed trees was observed in many parts of Cache Valley, which was under a high wind warning Monday night. Winds reached over 50 miles per hour Monday evening and again early Tuesday morning in Logan. Multiple large trees were uprooted in Logan and Hyrum city cemeteries, and a stadium light pole snapped and fell at the city baseball fields in Hyrum.

The Logan City Cemetery closed to the public on Tuesday, with a Parks & Recreation announcement stating that the storm downed “at least 20 trees resulting in open holes in the ground.” Other trees were damaged without falling completely, the announcement states, creating hazards that will also need to be addressed by workers before the cemetery reopens.

Clark and Angie Parker’s entire home in Paradise shook at about 5 a.m. Tuesday when a large tree fell on their roof, one of the branches even punching a hole through the ceiling and down a few feet into their front room. Angie said they’re feeling fortunate to be safe and that the damage wasn’t worse.

Clark was watching SportsCenter as he usually is at the time, and Angie was awoken by the house shaking. At first they thought a car may have come through their fence and hit a tree, but then they saw the branch coming through the living room and realized what had happened. Angie said she’s grateful for the community and guesses about 50 people offered them assistance Tuesday morning.

“We’ve had everybody from Tom, Dick and Harry stop by to see if they could help us,” Angie said. “This wonderful town, I’m telling you. Wonderful people.”

Both the tree and the home may be about a century old, Angie said, and the house’s sturdy construction probably worked in their favor.

“You know how they used to build those old homes,” Angie said. “We have very wide walls and a good, strong foundation. So we’re pretty blessed to not have it any worse than it is.”

Utah’s largest Eastern Cottonwood tree on record fell during the storm in Providence. Property owner Dee Chugg said about a third of the tree came down at about 3:15 a.m., followed by another half of the tree about an hour later. Luckily no homes were hit, but the tree smashed into a barn and a neighbor’s basketball area, Chugg said.

“We not only heard it, but you could feel it when it hit the ground,” Chugg said. “It fell away from every building except the barn, which it crushed.”

The tree measured about 110 feet high with a spread of 109 feet and a circumference of 33 feet, according to Utah’s Big Tree Directory. Chugg estimates the tree was about 140 years old. He said he’s still working out how to tackle cleanup and had his hands full Tuesday morning keeping his and other neighborhood kids away from areas that may be dangerous before he can cut branches down and clear pathways through the debris. It may be weeks or even months before cleanup is complete, he said.

“The professional guys are going to have to bring a saw in here and a crane in here to lift chunks out,” Chugg said. “I’m not in a real hurry to take care of it. It’s too daunting. I could have 50 truckloads of branches hauled out of here and it wouldn’t put a dent in it.”

Chugg has lived on the property for about six years but grew up next door and later helped his parents build the home. Aside from the out-of-school kids attempting to play on the tree, it’s been “pretty somber and sad” in the neighborhood, he said.

“I’m not liking 2020 anymore,” Chugg said, referencing the ongoing COVID-19 viral pandemic and other disasters. “Not that we all have, anyway.”

Logan City Police Department’s dispatch center advised people via Twitter to stay home Tuesday morning if possible due to “a high number of traffic hazards all over the valley.”

Complicating matters in Providence, a leak in the area of 570 South and 75 West shut off water temporarily for residents in the area, according to the city’s Twitter account.

The City of Hyrum reported that its crews had been busy since 4 a.m. assessing damage, prioritizing projects and repairing power lines with the assistance of contractors.

“Residents with trees that have fallen down in their yards may want to call private tree companies for assistance with removal and disposal,” a post on the city’s Facebook page states.

Hyrum workers set up a green waste disposal site near near 6200 South and 200 West, across from the Blacksmith Fork Vet Clinic, and asked that residents take plant debris there instead of the green waste bins at East Park.

North Logan set up a temporary green waste site on the ground north of the green waste bin at Elk Ridge Park.

For other schools in the district, patrons were instructed to have students go to bus stops 2 hours later than normal in the morning, but schools were set to dismiss at the same time as usual. Morning preschool and kindergarten were canceled. Online classes were expected to proceed as normal “unless the teacher does not have electricity,” the district stated in a notice on its website.

Logan City School District reported the power was on at all of its schools on Tuesday morning and that it would proceed with its regular schedules.

While winds had calmed in much of the Cache Valley area by later Tuesday morning, the Utah Department of Transportation restricted semi trucks and other high-profile vehicles on I-15 between Mile 313 in Davis County and Mile 365 Box Elder County due to high winds, as well as both directions of Legacy Parkway on Tuesday morning.

“If necessary, find a safe place to pull off the road,” UDOT advised truckers via Twitter at about 10 a.m. Dozens of semi trucks overturned in the wind across the state, according to multiple sources.

Northbound I-15 was closed near the Box Elder/Weber county line with “major delays” expected in the area.

The City of Logan asked Cache residents to check whether their garbage, recycling and green waste bins had blown over, since trucks were already driving Monday’s routes on Tuesday morning due to the Labor Day holiday. The city advised that it would likely take until Wednesday or even later to finish driving those routes and for people on Monday or Tuesday collection days to keep their cans standing and out at the curb until collected. Residents with collection days from Wednesday through Friday were instructed to put their garbage cans out as regularly scheduled.