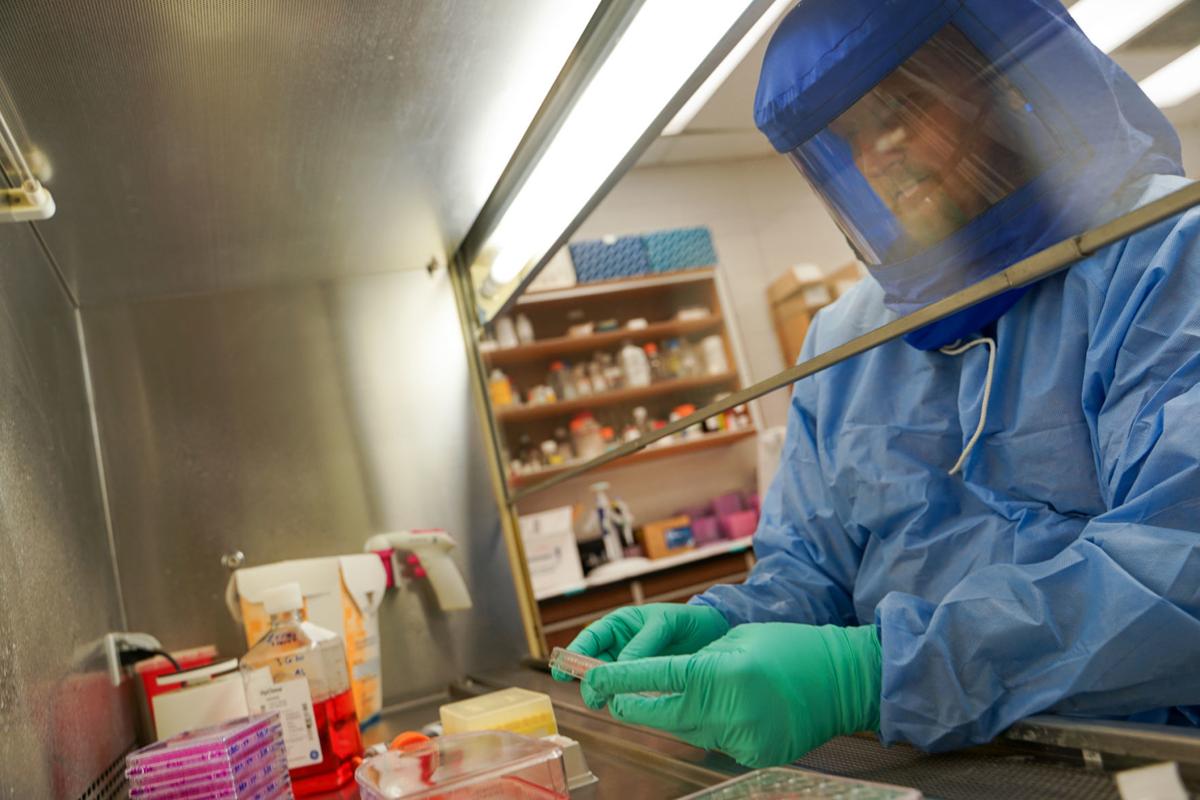 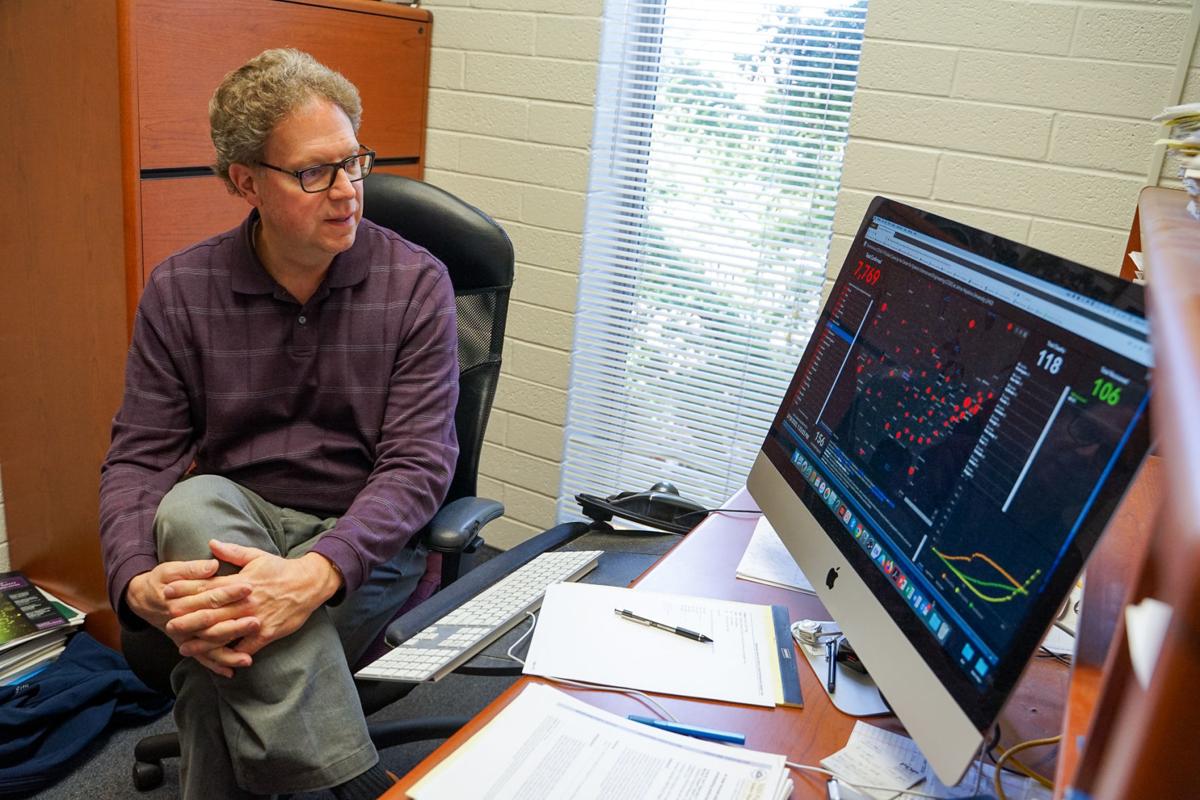 USU researcher Bart Tarbet is seen in his office at the USU Institute for Antiviral Research.

USU researcher Bart Tarbet is seen in his office at the USU Institute for Antiviral Research.

A vaccine or treatment for the virus that has turned the world upside down in 2020 could come from right here in Cache Valley.

The Institute for Antiviral Research at Utah State University has been studying infectious diseases for 43 years in its high-level containment laboratories on campus, including analysis of the original SARS virus that caused widespread alarm in the early 2000s. Thursday the institute announced it has received a $2.5 million grant from the National Institutes of Health to test antiviral agents and drugs for their effectiveness against novel coronavirus, the latest mutation of SARS.

The institute has been running experiments on coronavirus since February and just secured the funding for an extensive investigation into treatments. The urgency of the project has the institute “working at a run,” USU’s lead coronavirus researcher Bart Tarbet said, and in the interest of expediting work, the research team will pursue a number of different avenues of investigation at the same time.

Tarbet said his team’s experience with the original SARS virus has provided a good starting point for working with coronavirus, although a vaccine was never developed for SARS after it lost momentum following its initial deadly spread.

“We have a database of antiviral compounds from in vitro testing against the 2003 SARS and MERS viruses, so we will be evaluating everything that makes sense to test against this coronavirus,” Tarbet said. “We also work with medicinal chemists from around the world developing potential therapeutic agents. Recently, we have had many research sponsors requesting in vitro testing of new antiviral compounds. We have no shortage of potential drugs to evaluate.”

Tarbet and his collaborator, Brett Hurst, are both research professors in USU’s animal, dairy and veterinary sciences department. Their USU research team has already experimented with a few possible antiviral substances contained on a short list issued in January by the World Health Organization.

Two other drugs touted by President Donald Trump as potential treatments, chloroquine and azithromycin, have been added to the list by the National Institutes of Health. Azithromycin has been studied before by the USU team and found ineffective on mice with influenza, Tarbet said.

Mice and hamsters are used in the institute’s research and are considered critical in learning about the effectiveness of treatments. The process typically starts with in vitro, or test-tube, experimentation and advances to rodents if the drug or compound being worked with shows promise.

“So in cell culture and by computer modeling we make predictions, but it’s really in the animals that we find the truth, because animals are far more complex than cell cultures,” Tarbet said.

The hamsters used in the USU labs were genetically engineered for virology by another USU veterinary and animal science researcher, Zhongde Wang. The rodents have a human gene inserted in their DNA that helps scientists simulate human physiology in their tests.

The Institute for Antiviral Research works out of several laboratories at USU and on the USU Innovation Campus, but work on coronavirus will be limited to the institute’s highest rated biosafety containment laboratory. Biosafety levels are ranked on a 1-4 scale, and the lab Tarbet and Hurst use for the most lethal viruses is rated Level 3+. Only a few non-governmental labs in the world have a Level-4 rating.

Tarbet and Hurst both expressed shock at the rapid advance of novel coronavirus and concern that the public has been slow to acknowledge the threat.

“I’ve been working on infectious diseases since 1992, and I’ve never seen anything like this,” Tarbet said. “So is there urgency? Absolutely. Do we need to panic? Heavens no, but I do get concerned when I see people ignoring public health recommendations. And when some crazy person is coughing on the vegetables in grocery stores, you know they ought to be locked up.”

In a USU press release sent out Thursday, Hurst was described as being frustrated with messages on social media playing down the threat of coronavirus and comparing it to just another round of seasonal flu. Data indicates death rates for COVID-19 are much higher than for flu, he noted.

Asked by The Herald Journal if daily press briefings by the president and the federal Coronavirus Task Force have added to public confusion about the threat, Hurst said no.

“I have great trust in Dr. Fauci and his response to the administration,” Hurst said about NIH Director Anthony Fauci, who often speaks at the briefings. “So I think he’s helping keep them on track. He has a very level head and he’s a very smart man. So the things that I hear him say are the things I try and repeat and I try and keep in mind.”

Tarbet offered this on the question of how long it might take for novel coronavirus to run its course:

“That is the million-dollar question. We’ve worked on influenza viruses for a number of years, and when the temperature rises we see fewer influenza virus cases. … Say the temperature change does start to reduce the number of cases (of coronavirus). Will we see it come back in the fall when the weather changes again? We just don’t know. I think being prepared for this to go longer than maybe expected would certainly be a good preparation, but we don’t know.”