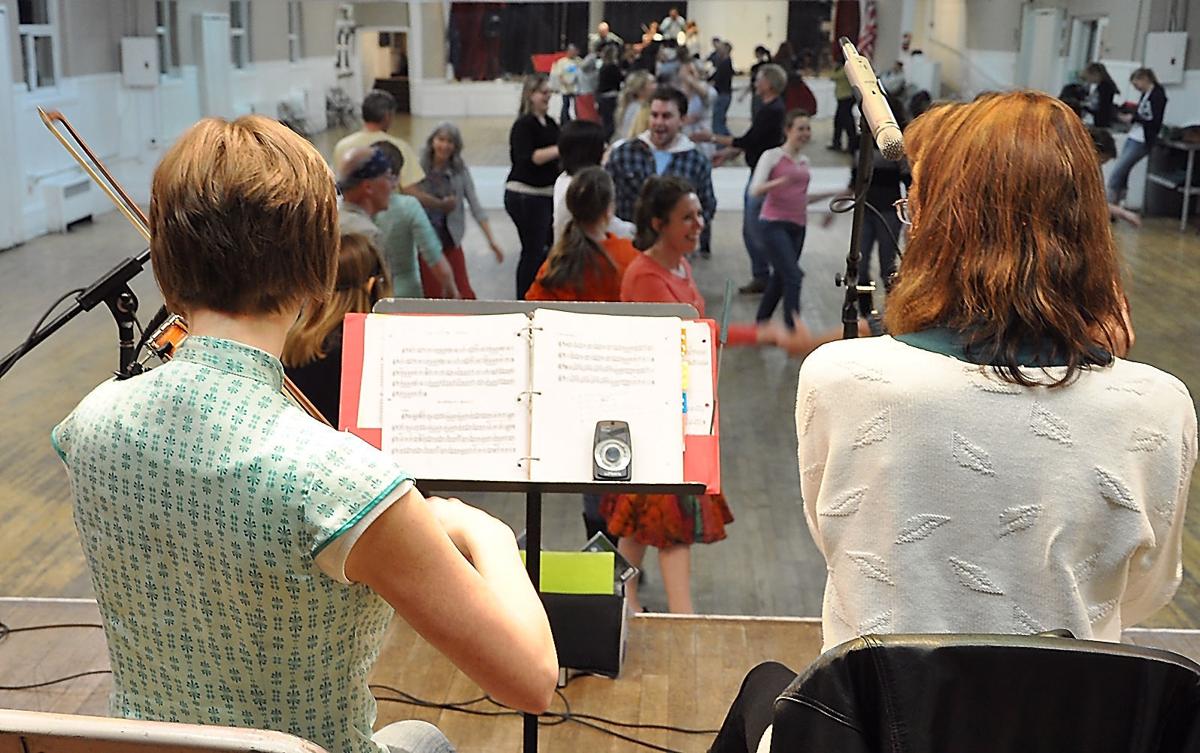 Musicians play for contra dancers at the Whittier Center in Logan earlier this month. The Cache Valley Celtic-music band Leaping Lulu headed up the show with other musicians sitting in. 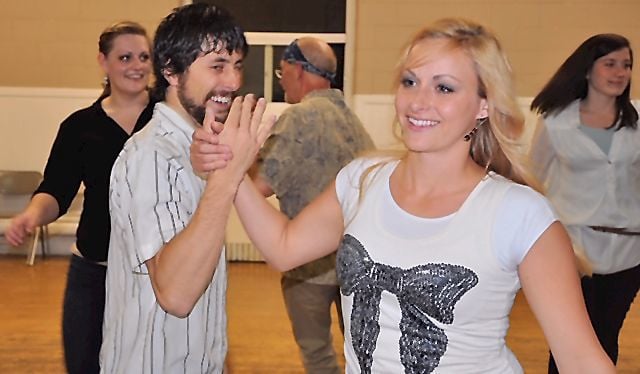 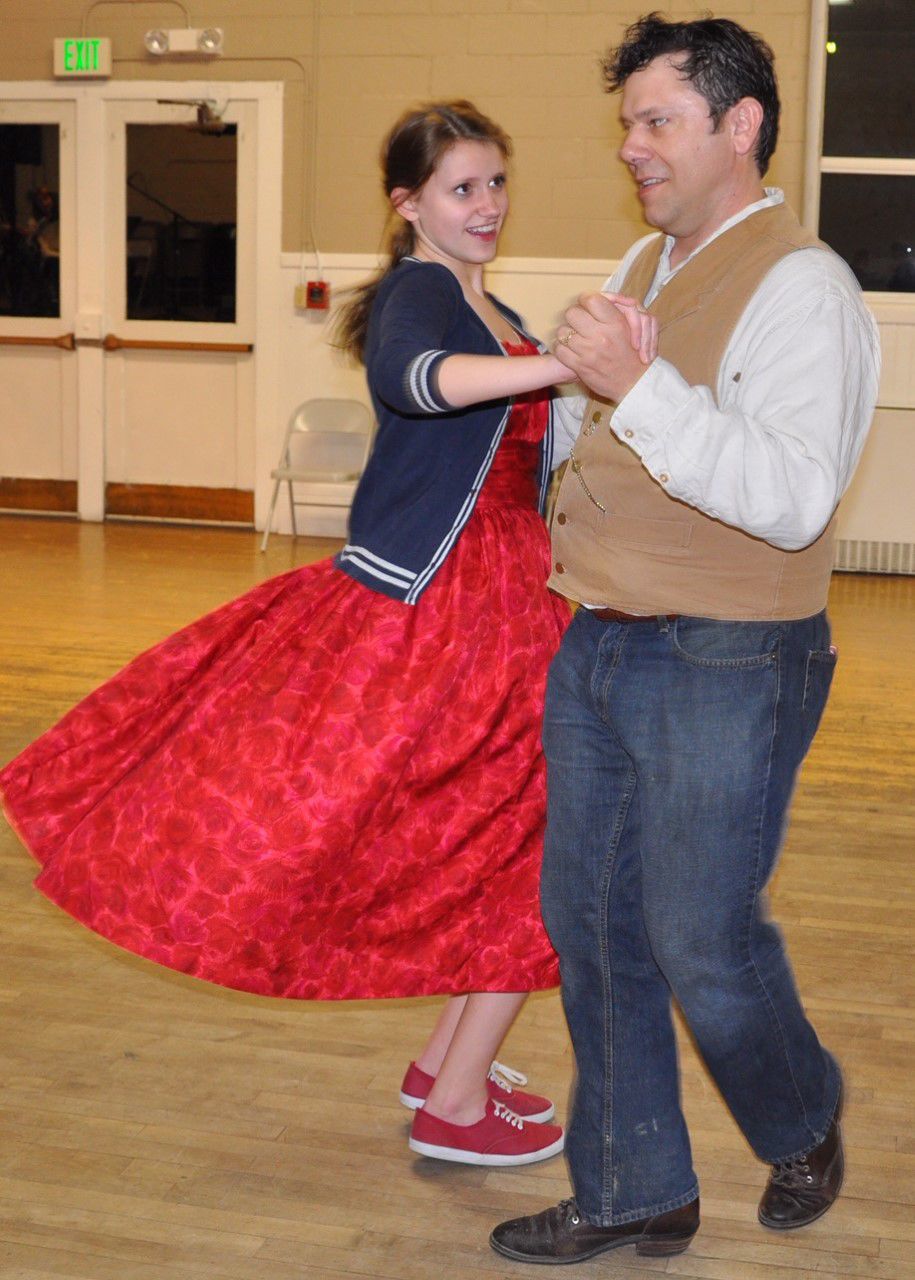 The Bridger Folk Society's contra dance is put on at the Whittier Community Center in Logan on the first Saturday of each month from October through May and on the second Saturday in September. 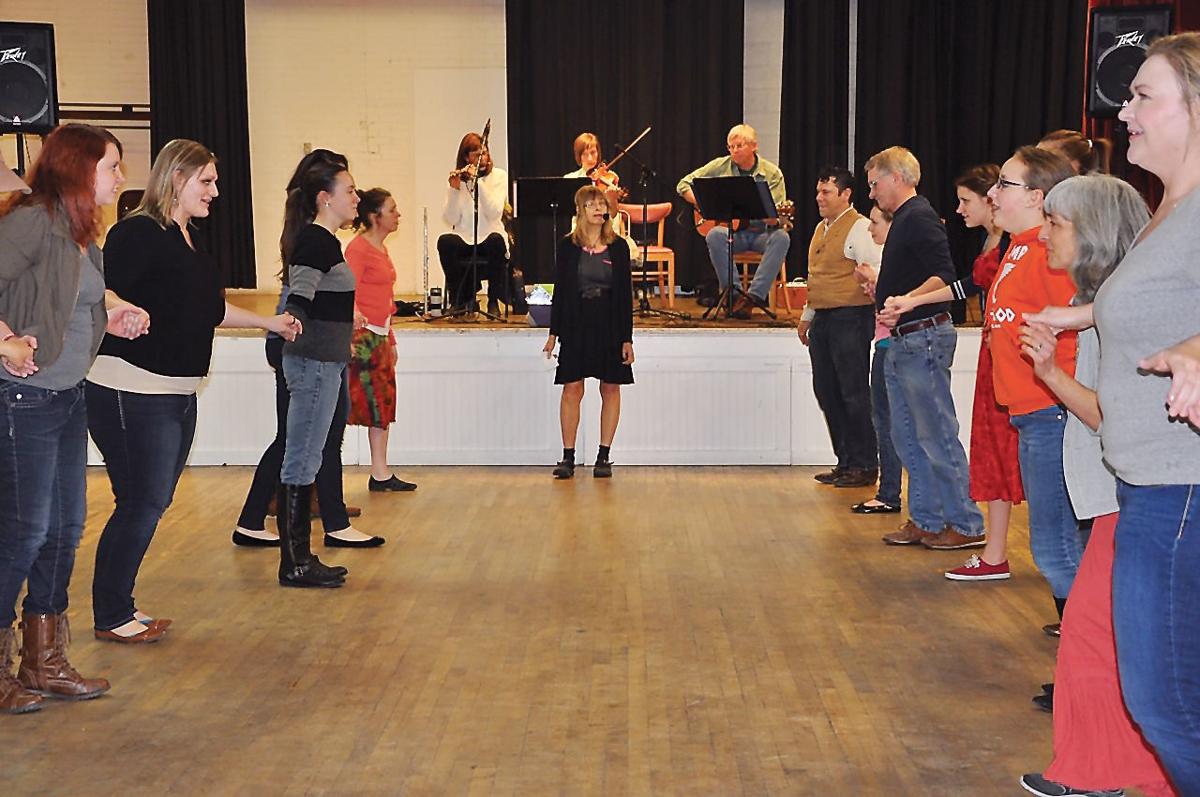 Kay Forsythe, who brought contra dance to Cache Valley in the early 1990, calls out directions to two dance lines at a recent Logan contra dance.

Musicians play for contra dancers at the Whittier Center in Logan earlier this month. The Cache Valley Celtic-music band Leaping Lulu headed up the show with other musicians sitting in.

The Bridger Folk Society's contra dance is put on at the Whittier Community Center in Logan on the first Saturday of each month from October through May and on the second Saturday in September.

Kay Forsythe, who brought contra dance to Cache Valley in the early 1990, calls out directions to two dance lines at a recent Logan contra dance.

Whatever happened to social dancing? Even up until just a generation or two ago, waltzes, foxtrots, jitterbugs, Virginia reels and square dances were common forms of fun among the old and young alike. Are these community gathering art forms lost forever?

Not in Cache Valley. Besides the ability to learn to swing dance at Hyrum’s Elite Hall, a much older form of social folk dance called contra dance is being taught by the Bridger Folk Society at Logan’s Whittier Center — and everyone, from those who have never stepped on a dance floor to those who love to dance, is welcome to come learn. Even children as young as 6 with an interest in dancing can come participate.

“Beginners are welcome!” said Kay Forsyth, the dance caller and founder of the contra dance program in Cache Valley. “Sometimes people hear that and really don’t believe you, but it really is true. Every dance night is different, and we call to the crowd. … The first time you do it, you may be a little overwhelmed, but usually by the second time you begin to believe you know what you’re doing, and you don’t even need to come with a specific partner to enjoy it.”

Contra dance is much like square dancing but done in long lines. After completing a series of dance steps — such as a do-si-do, promenade or allemande — one line moves one way and the other line moves the opposite way. In that way, though the step patterns remain constant, partners continually change. Forsyth teaches easy steps at the beginning of the night and then may add more steps as she sees the dancers are ready.

Though square dancing is more familiar, Forsyth said contra dancing arrived in America long before square dancing did and is actually one of its predecessors. Contra dancing originated in Scotland and England but became popularized in France in the 18th century.

According to a history written by the Tuscon Friends of Traditional Music Society, contra dances in France became the traditional dance at parties hosted by nobility and royalty.

“This newly energized dance returned to England,” the history states, “where it became very popular, quickly jumping across the Atlantic to the New England region where it transformed into the traditional dance of that territory. … Its mass popularity in Eastern US lasted all the way up to the middle of the 19th century when dances for individual pairs gained traction, most notably waltz and polka.”

When Jazz took over the U.S. music scene in the 1920s, contra and square dancing remained mostly in rural communities in New England. It grew in popularity again in the 1960s with the “Hippie” folk movement and by the concerted efforts of callers Ted Sannella and Dudley Laufman.

Contradancing itself has changed over the centuries as well. In the 18th century, dancers were expected to learn and memorize specific steps that were much more complicated. Some of this was due to the fact that large crowds in earlier centuries would have had a hard time hearing callers above the music and dancing. Today, steps are simpler and callers can use amplifiers and microphones so dancers don’t have to have the steps memorized and anyone can join.

“Its official name is New England Style Country Dance,” Forsyth said. “Contra is its shorthand name, which could likely came from the French word ‘contre,’ which means opposite or against — dancing opposite your partner.”

“They built buildings and dance halls in New England like they did in England — long and narrow,” Forsyth continued, “so they generally danced in long lines and faced your partner across the line, and then you danced in groups of four consisting of two couples. … In the 1800s people were moving to the West and they didn’t have big, long dance halls. They built square barns. Square dancing evolved from that and had influence from the French quadrille which is danced in a kind of square formation.”

Forsyth joined the International Folk Dance Group when she moved to Logan in the late ’80s. About a year later, she attended a contra dance workshop in Salt Lake City and found she really liked it. The live music is what initially drew her in.

“Live bands add a lot of energy to the dance,” Forsyth said. “We had used canned music for the International Folk Dancing.”

Forsyth loved contra dancing enough to want to bring it to Cache Valley. In the early ’90s she convinced a caller and band to come up from Salt Lake City to play for quarterly dances. After the dances had been going in the valley for a few years, a bad storm hit one February night the dance was supposed to take place, and the caller did not dare travel through Sardine Canyon.

“So I got on the phone with the caller and got notes on how to teach,” Forsyth said. “Luckily, it was a really small crowd because it was really a pretty bad night for the dancers!”

Forsyth discovered she enjoyed calling the dances and has now been doing it for 27 years. Over the years Forsyth said that contradance attendance has increased and waned at times. She would love to see more youth get involved and keep these traditional dances alive.

“When they try it, they often like it,” Forsyth said. “There’s so many activities drawing their attention, it doesn’t hit the top of the radar for them … but one thing that contra dance does is that it makes you fully concentrate in the moment. You can’t be on your phone or technologically connected. It distances you from that, and you focus on what you are doing at the moment, at the time, and it is fun. Once you learn the steps, it allows you to talk and laugh with your friends.”

Forsyth has also often been hired to call for large youth church groups and weddings.

The Bridger Folk Society’s contra dances take place from 7:30-10:30 p.m. on the first Saturday of each month, October through May, at the Whittier Community Center, 290 N. 400 East in Logan. September is the only exception, where a dance takes place on the second Saturday, due to Labor Day. There is no set fee to attend, but donations of $10 for dancers 15 and older and $5 for dancers younger than 15 are suggested.

More information can be found at www.bridgerfolk.org/contra.html or by emailing Forsyth at forsythkay@gmail.com.