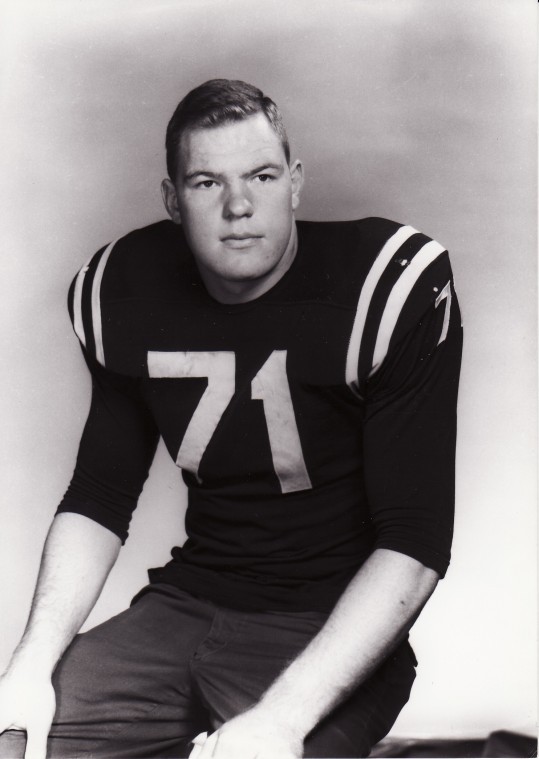 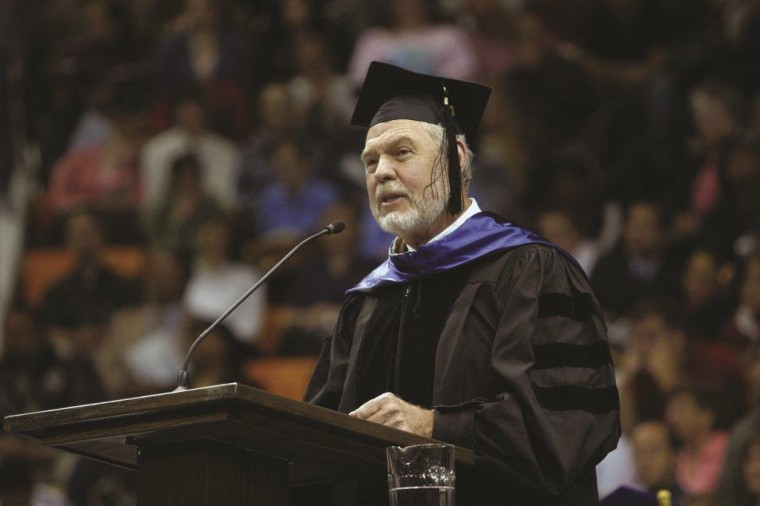 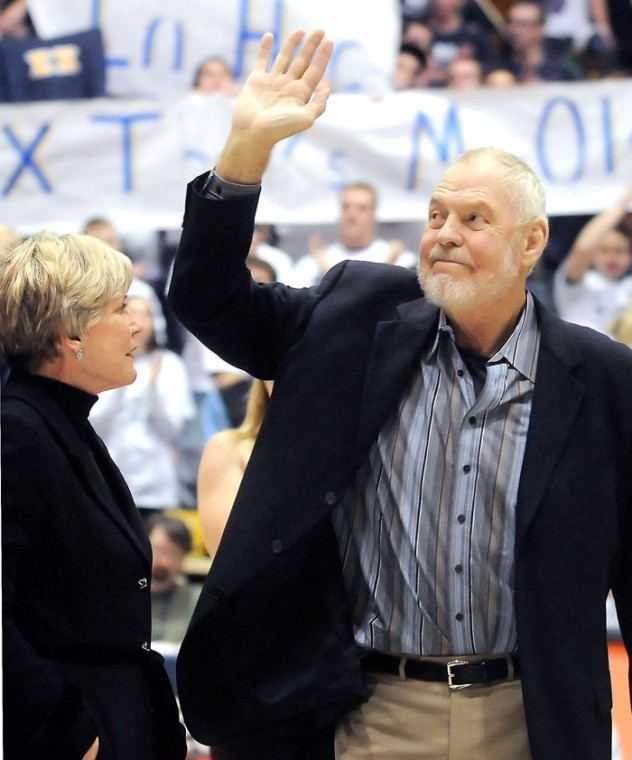 Merlin Olsen waves to the crowd at the Spectrum while being honored during halftime of the Utah State-St. Mary's basketball game Friday December 5, 2009 in Logan Utah. 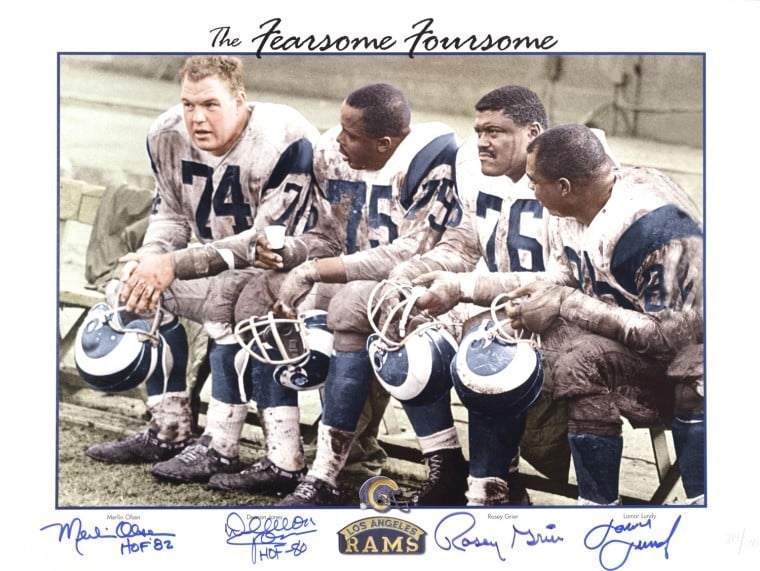 Merlin Olsen and the Fearsome Foursome on the L.A. Rams 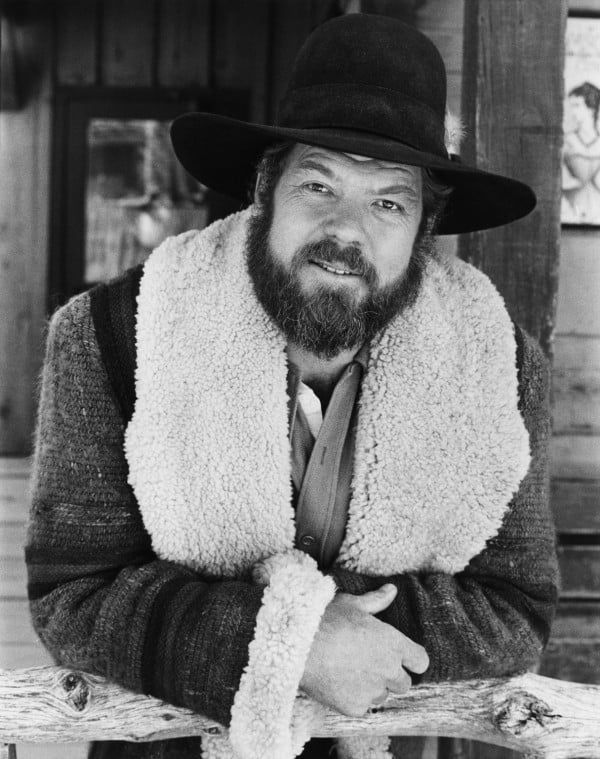 Merlin Olsen poses in costume from the show "Father Murphy."
1 of 5

Merlin Olsen waves to the crowd at the Spectrum while being honored during halftime of the Utah State-St. Mary's basketball game Friday December 5, 2009 in Logan Utah.

Merlin Olsen and the Fearsome Foursome on the L.A. Rams

Merlin Olsen poses in costume from the show "Father Murphy."

Arguably the best-known Utah State University alum passed away at the age of 69. Football and academic great Merlin Olsen succumbed to mesothelioma, a form of cancer, early Thursday at the City of Hope Hospital near Los Angeles. He was surrounded by many members of his family.

"Merlin has been in incredible pain these last days, but he has not complained," said Phil Olsen, a brother who was also a star football player at USU. "He has always been able to do that. He could play through injuries because he had a high pain threshold. He could just deal with pain, but it has been intense."

Since having pain in his back last summer, Merlin has gotten worse and undergone treatment for the cancer. There was some hope in December shortly after USU honored him at an Aggie basketball game, where it was announced the field at Romney Stadium would be renamed and be known as Merlin Olsen Field. Merlin had responded to some treatment then, but it was short-lived.

Funeral arrangements are still being finalized, but Phil Olsen said the services will be held in Pasadena, Calif. He said he thinks those services will take place next Tuesday. There will also be a memorial service in Utah at a later date. Merlin Olsen will be laid to rest in Pasadena, where he, his wife and two of his children call home.

"A lot of his family is in Southern California now," Phil Olsen said.

"Biologically we were brothers, but we were more than that. We were friends," Phil Olsen said. "We spent a lot of time together and our kids grew up together like brothers and sisters."

Merlin was a Logan native, having starred at Logan High School before moving on to become the greatest football player to put on an Aggie uniform.

"I've always said, Merlin and Heisman Trophy winner Jim Plunkett at Stanford were the two best college players I ever coached," said Hall of Fame coach John Ralston, who was the USU coach when Merlin played from 1959-61 - freshmen were not eligible to play varsity then.

"Of all the players I've been around, he was the best," Ralston continued. "He was a superstar in every aspect."

Olsen first gained national recognition as an All-America football player at USU in 1960. The next year, he won the Outland Trophy as the nation's top defensive lineman and was taken by the Los Angeles Rams in the first round of the 1962 NFL draft as the third player chosen. He earned All-Pro honors nine times, was the NFL's Defensive Rookie of the Year in 1962 and the league's Most Valuable Lineman in 1973.

After his incredible football career, Merlin had a long career on television - acting as a sports commentator and doing commercials. He also was a tireless philanthropist, giving large amounts of time, talent and financial resources to numerous causes across the country. Over the years, he's also stayed connected to both the Cache Valley and the Bear Lake areas, in addition to being very involved with USU.

"Merlin has served the university in so many different ways," USU President Stan Albrecht said. "The last few years he has been on our foundation board. When we reached that amazing goal of $200 million in our campaign, some said we should stop and take a breath. Merlin said, ‘No, we're climbing the next hill.' As much as anyone, Merlin was the reason we doubled the campaign goal.

"He believed in Utah State and committed his life in many ways to Utah State."

Merlin's voice can be heard narrating advertisements for USU. He did three different ads recently.

"Knowing how ill he was, watching those ads particularly during the Olympics, it was very moving," Albrecht said. "The thing about Merlin is he has been consistent. There was no need for some last-minute push to get his name out there. It is important for us to get his name out in naming the field. ... I can't think of a single time that we have called Merlin and asked for something and he hasn't responded. That's pretty special."

That consistency came up several times in talking with people who knew Merlin Olsen.

"He has been consistent from the time he graduated," said Ross Peterson, USU's vice president for advancement. "He never asked for anything. Whenever we asked him to do something, he came through. ... Naming the field is really a capstone in recognizing a lifetime in really what Utah State University is about. That is a person from Utah and the valley (who) seized the opportunities that were given. ... At every turn he took advantage of the opportunities the university provided him, academically to athletics. He was just really, really special.

"We at Utah State don't spend a lot of time patting ourselves on the back. Merlin epitomized that. He endowed scholarships in the name of his parents in the '70s. He donated consistently."

Merlin starred in television shows "Little House on the Prairie," "Father Murphy" and "Aaron's Way." He worked for NBC Sports and called many games with longtime broadcasting partner Dick Enberg, who recently wrote a letter to Olsen.

"I'd often felt that I had given an A effort in our broadcasts only to recognize you earned the A-plus," Enberg wrote. "You are a man of goodness, eager to consciously do the right thing for yourself, while helping others."

A park in Logan's Island neighborhood, near where Olsen grew up with his nine siblings, also carries his name.

"Cache Valley was very special to Merlin and our whole family," Phil Olsen said. "He had some fond memories growing up there and going to school there. I have spent the last nine days by his side and we have been able to share some memories that will last forever."

Phil was able to play four years alongside his brother with the Rams and listed that as being something "very special." That was the first time brothers started and played next to each other along the defensive line on an NFL team.

USU did get a win and Aggie head coach Stew Morrill spoke about Merlin Olsen during his postgame press conference.

"As an Aggie, I hope he was smiling as we advanced in the tournament today," Morrill said. "He's one of a kind, unique to Utah State and very special. He had such class throughout his athletic career and his acting career and his announcing career.

"He's what a quality guy should be all about, and that was Merlin Olsen."

"Merlin Olsen was an extraordinary person, friend and football player," Goodell said. "He was a tremendous Hall of Fame football player who then became an accomplished football broadcaster and actor. In recent years, it was an honor to work with Merlin on developing improvements for retired players. We all experienced how passionate and effective he was on that issue. He cared deeply about people, especially those that shared the game of football with him. Merlin was a larger-than-life person, literally and figuratively, and leaves an enormously positive legacy. On behalf of the entire NFL family, we extend our deepest sympathy to Merlin's wife Susan and the Olsen family."

The Rams honored Merlin last December as well. The franchise is now located in St. Louis. Majority owner Chip Rosenbloom released a statement: "In Rams' history, there are maybe 10 guys who are iconic, and he's one of them. There's nobody who is more important."

Famous nationally for being a member of the "Fearsome Foursome," Ralston has said on different occasions that Merlin was just as good on the offensive side of the ball.

"Boy could he play," Ralston said. "If he was playing today, they would just line up and run behind him all the time. Merlin had such explosion. At 265 pounds, he was just incredible. He was on the field all day.

"... I've been around football for a long time, but when I was at Utah State and had Clark Miller and Merlin Olsen, they were the two best tackles to ever play on a college team. ... Boy was he something."

Miller and Olsen played together in the East-West Shrine game and were co-Players of the Game.

Ralston talked to Olsen two weeks ago and knew his former player was not going to be around much longer. Olsen sent Ralston an e-mail with information he wanted his former coach to pass along to his teammates, which Ralston has done.

"His teammates have always been so supportive of Merlin," Ralston said. "What a great individual. What a great human being."

Merlin was loyal. When he was inducted in the NFL Hall of Fame after 14 trips to the Pro Bowl in 15 seasons in the league, he had his line coach at USU, Tony Knap, introduce him in 1982.

Aggie Hall of Fame trainer Dale Mildenberger met both Merlin and Phil Olsen when he first came to USU 35 years ago. While not a close friend, he got to know the brothers.

"Look at his history," Mildenberger said. "There is no larger figure than Merlin Olsen - and not just in athletics but for the whole university. He is larger than anyone else I've known at Utah State."

"It's a huge loss," USU Athletics Director Scott Barnes said. "It makes next fall so important. Next fall we get to celebrate his achievements and what he meant to our university. As much as it hurts today, we're looking forward to that celebration."

The Aggie football team will wear No. 71 stickers on their helmets during upcoming spring ball and the 2010 season.

"We will wear No. 71 stickers on our helmets," USU head football coach Gary Andersen said. "They will be on there the first day of spring football and we will carry that with us on through next fall. We will continue to educate the kids on how special a person Merlin Olsen was."

A dedication ceremony will take place next fall during the 2010 Aggie football season in conjunction with the 50th anniversary of USU's 1960 Sun Bowl team, which was led by Olsen. There will also be a larger-than-life statue unveiled on the southeast corner of Romney Stadium, which renowned sculptor Ken Buswell is working on now.

"I talked to him (Merlin) last Saturday about the sculpture and e-mailed him a copy of what it would look like, and he was thrilled," Peterson said. "It is fantastic."

"He was an academic star," Albrecht said. "He understood the importance of academics and reflected that in what he did."

During Olsen's junior and senior seasons, the Aggies were a combined 18-3-1 under Ralston and were Skyline Conference co-Champions each year. USU played in back-to-back bowl games against New Mexico State (Sun Bowl, 1960) and Baylor (Gotham Bowl, 1961). The Aggies finished the season ranked 10th in both the Associated Press and United Press International polls, the highest-ever final ranking for a USU team.

RENO, Nev. - This was Merlin Olsen: