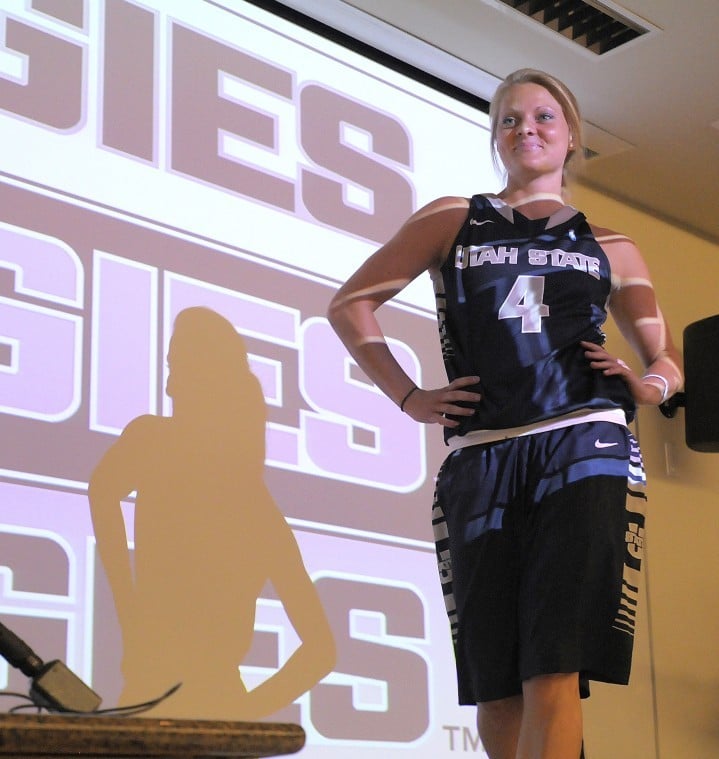 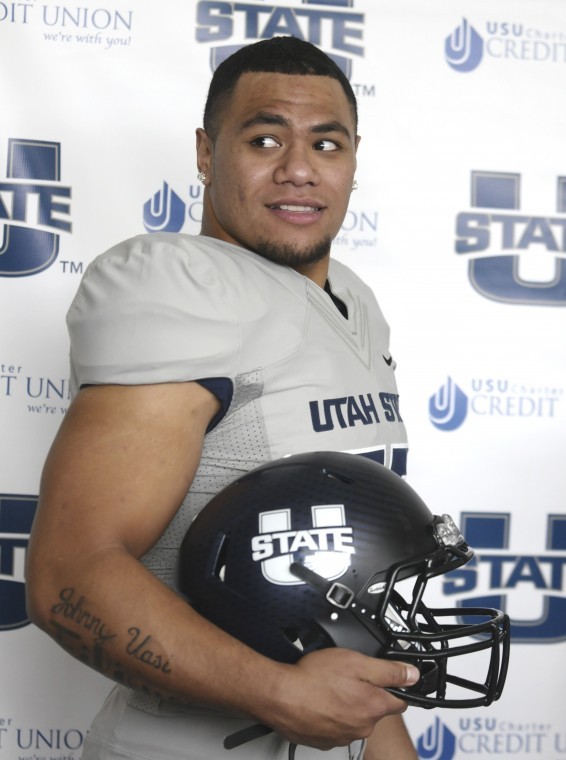 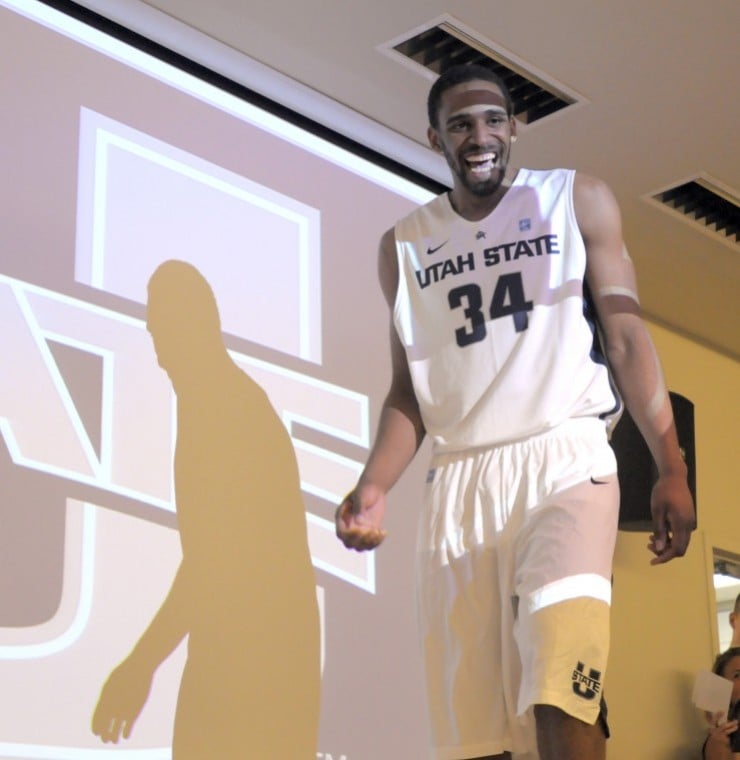 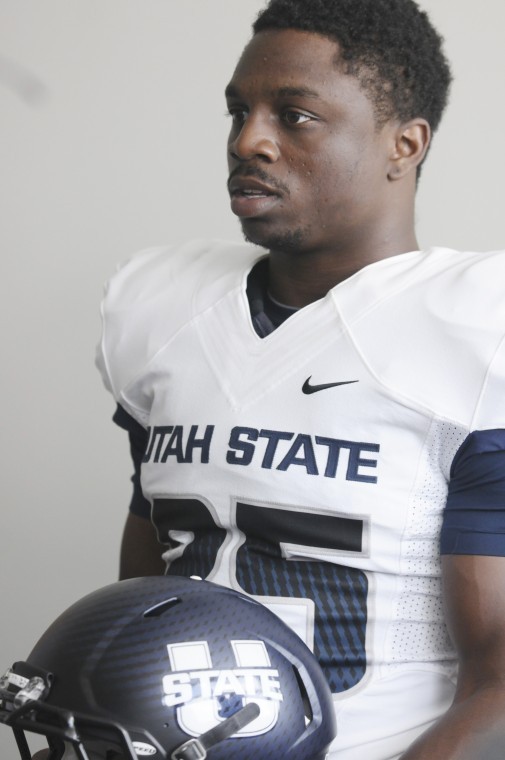 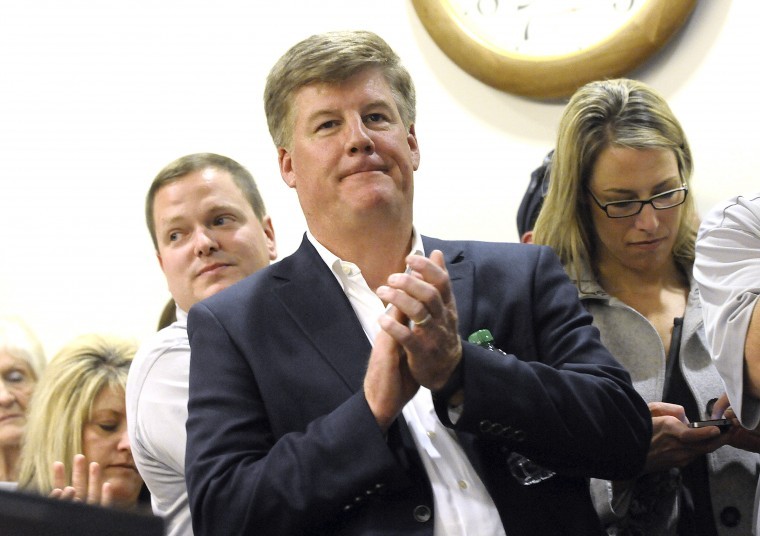 Out with the old, in with the new.

The Aggies’ new look was well received by the administration, student-athletes and fans.

“After working with Nike over the past several months we are extremely pleased with the results,” USU Athletics Director Scott Barnes said. “This branding initiative is another important step in growing our overall athletic program. Our new marks and branding program brings a crisp, modern clarity and consistency to our brand while honoring our rich history.

“I want to thank Nike, and especially Nike president and former USU football student-athlete Charlie Denson for his passion and commitment to this project.”

Barnes, distinguished USU alumni, and Denson introduced the Aggies’ new logos to a standing-room-only crowd inside the Spetman Auditorium.

“Attending Utah State and playing for the Aggies was a great honor and very special time in my life,” Denson said. “It’s a privilege for me to be back here today with members of the athletic department to celebrate the long-standing traditions of Utah State, as well as to help unveil the new uniforms and kick off another great season of sport here at the Logan campus.”

The university worked with Nike in collaboration on a 15-month re-branding campaign launched Saturday. The entire athletics department will benefit from this partnership, which has been made possible by the long-standing association between USU and the Nike brand.

“The idea that now Utah State has its own set of marks, they own them and are trademarked, and there is a very consistent use and set of rules in place, we can start to build equity,” Denson said. “We can build that image and identity around not only the state of Utah, but throughout the country.

“That’s incredibly important when you think about the long-term impact of what we do. Some of the other schools that Utah State is now in the company of are schools like Duke, the University of Florida and Michigan State. We have redone their image packages, as well.”

A refined U-State mark will serve as the primary representation of the brand and will be used as the main identifying device for Aggie athletics.

The new mark is an evolution of the current U-State mark and supports the goal of respecting the past, while representing the future.

“In this process, Nike, our staff and the focus groups involved paid particular attention to celebrating and honoring the past, our history and moving forward with the new design,” Barnes said. “We wanted to honor the past and clean some things up and move forward. We are the only U-State in America and we want to be proud of that.

“This mark is used by itself. Along with this, we have secondary marks and wordmarks that Nike has worked with us to develop.”

The custom font, numeral set and word marks of the brand were designed to reflect the bold and athletic attitude of USU and differentiate the institution from other schools.

Besides navy blue and white, the Aggies have added a new color to their palette: Pewter gray.

Along with the new U-State mark is one that features the Aggie bull. The bull first appeared on a USU football game program in 1975 and was adopted as the school’s mascot the following year.

It was explained the new bull mark references the rich agricultural heritage of the school, while bringing the characteristics of physical strength, fortitude and energy to life visually.

“I like it,” said USU women’s basketball player Jenna Johnson. “I like the addition of the bull. It brings more of the Aggie into the Utah State. ... I love it, I’m excited.”

During Saturday’s unveiling, student-athletes representing the sports of football, men’s and women’s basketball, volleyball, soccer, cross country, softball and track and field modeled new uniforms that will debut during the 2012-13 season.

As part of the new program, all 16 of USU’s varsity teams will receive new uniforms. These uniforms will highlight the use of consistent color across all sports and will feature new logos, lettering and numerals exclusive to the university.

“All of that will be part of the Utah State arsenal when the teams take the field next year. It’s been a lot of fun.”

Football player Kerwynn Williams is impressed with the new duds.

“Nike really did their thing and upgraded our jerseys real well,” Williams said. “I’m glad that we have (multiple) choices for next season. There’s a lot of different combinations that we can do with these jerseys. Nike outdid themselves.”

Most of the Aggie sports teams will get three uniforms — home, road and alternate.

“I’m excited to be able to get that jersey on and try out the gray one. But the home blue always looks good. All the jerseys look real well and I’m very excited for next season.”

The uniforms the student-athletes will be wearing are lightweight and designed for superior performance, ultimate moisture management and greater freedom of movement.

“They feel so much lighter compared to last year,” Johnson said. “The feeling of them is different, too. They’re lighter and the material is awesome.”

“The jerseys are a lot more breathable,” Williams noted.