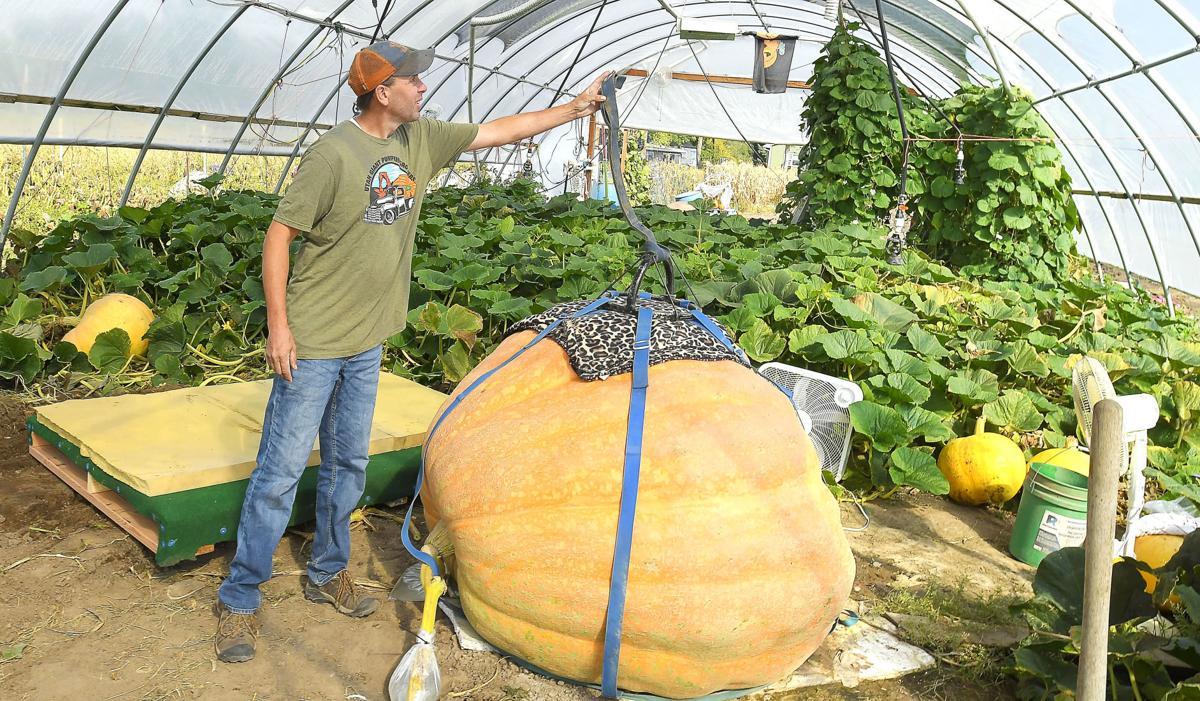 Jim Seamons puts straps around a giant pumpkin to lift it off the ground in Benson, Utah. 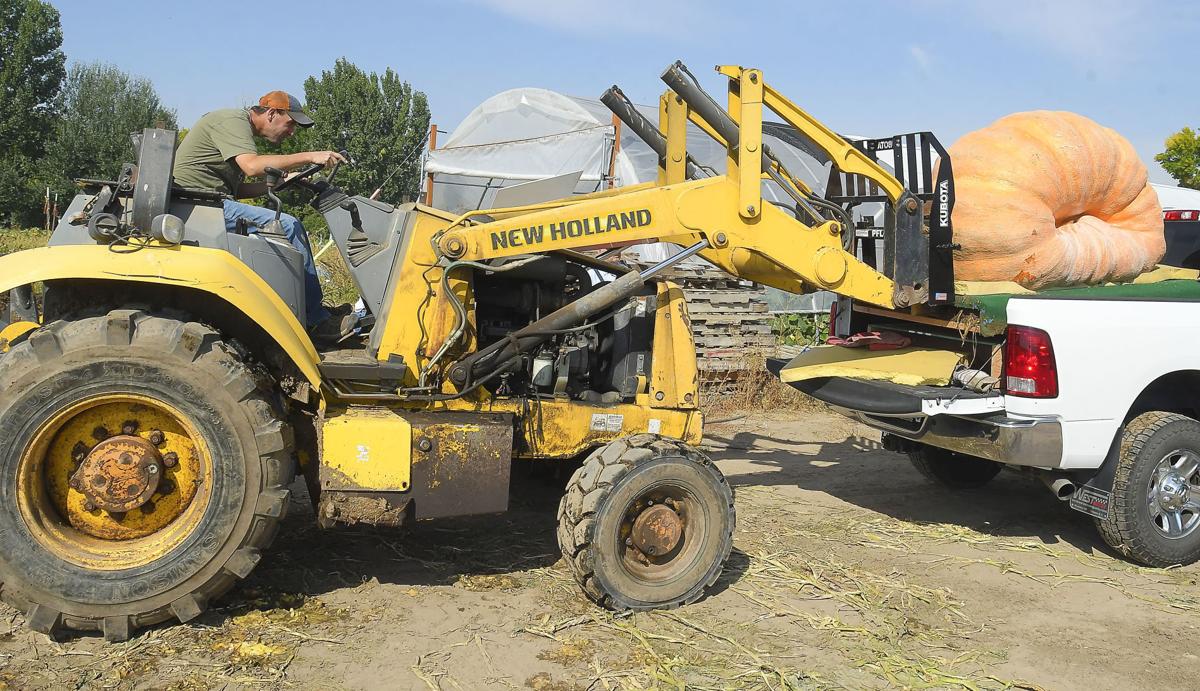 Jim Seamons loads a giant pumpkin that he grew into the bed of a truck in Benson, Utah.

Jim Seamons puts straps around a giant pumpkin to lift it off the ground in Benson, Utah.

Jim Seamons loads a giant pumpkin that he grew into the bed of a truck in Benson, Utah.

Jim Seamons only took second place at the Utah Giant Pumpkin Growers 16th Annual Weigh Off at Thanksgiving Point on Saturday — but he set a new record for the largest-recorded pumpkin grown in Cache Valley.

“I’m in competition with myself, even though we’re competing against each other down there,” said the Benson native. “I mean, this is my new personal best, so I do have to beat it.”

When Seamons first grew pumpkins on his farm in 2009, they turned out to be about baseball- or softball-sized. After officially selling his dairy farm, he grew a 600-pound monster in 2014. Then the next year, one grew to 1,000 pounds.

As of Saturday, his personal record-breaker weighed in at 1,448 pounds — nearly 200 pounds bigger than the 2018 record for the valley from Alan Geber, of Millville.

When Jim Seamons told his bank he was dissolving the family dairy business to grow giant pumpkins, he was met with derision and laughter.

Other than the giants housed in the greenhouse in Benson, there are thousands of smaller pumpkins for jack-o’-lanterns, plus novelty Gumdrop and Snowball pumpkins and scene-stealing Frankenstein and skull-molded pumpkins.

Last year, Seamons sold 55 of the 70 giants he grew. But this was a “miserable year” for growing. It wasn’t a good year for the molded jack-o’-lanterns, and when COVID-19 hit, Seamons stopped fertilizing the majority of his giants. He said he expects to only break-even this season.

But though the pandemic led to a massive cancellation in the events Seamons typically provides the giant pumpkins to, it’s also lead to an increase in local traffic to his farm for the “you-pick” service.

“We’ve had more come, and we’re early,” he said, “because most people are just starting to think ‘pumpkin.’”

Saturday was the kickoff of “pumpkin season,” according to Seamons. Though the farm is busiest in the third week of October, Seamons said over the last week, an average of 10 carloads a day have come to the farm to pick pumpkins.

On Sunday, Stephanie Ramsey, who went with her niece and two children, was among the seven families who made the drive to see what Cache Valley Giant Pumpkins had to offer.

“It’s that time of year, and my daughter is very much into Halloween,” the Logan native said. “We were trying to do something that would get us out of the house, so pumpkin picking seemed like a good idea.”

Ramsey, a schoolteacher, said trying to maintain as much normalcy as possible this year is crucial, and outdoor fall activities are one of the safest ways to accomplish that.

Seamons added that since the farm is set up with PayPal and Venmo in addition to the standard cashbox, picking pumpkins can be done with as little contact as possible for those concerned.

Though Seamons grew up doing chores on the family dairy farm, he and his family now go all-out for Halloween. He hopes to carve and display hundreds of pumpkins in his yard the last week in October — as long as the weather doesn’t turn.

Seamons grew up on the family dairy farm and worked there full-time after he served a mission for The Church of Jesus Christ of Latter-day Saints and graduated Utah State University. Because of his farming background, he thought growing pumpkins would be easy.

“It’s one of the hardest things I’ve ever done in my life,” Seamons said. “And then it becomes an addiction, which has developed into kind of a small business. … It’s been a big lifestyle change, but this is just developing. It gets bigger and bigger each year.”

And so does the competition, according to Seamons.

While the annual weigh-off at Thanksgiving Point typically consists of “a bunch of 400-800-pounders, a couple over 1,000, and one 1,700-1,800-pound winner,” there were eight pumpkins weighing more than 1,000 pounds at the competition on Saturday.

Part of the explanation is with lockdowns and virus-mitigation efforts, more people had time at home to tend to gardens. Competitiveness is another factor, as Seamons said it’s hard to stop after growing even one giant.

“I don’t want to grow competitively next year,” he said. “I’m gonna grow commercially. But after (Saturday’s weigh-off), I’ve got to grow bigger.”

On Saturday, the largest was Mohammed Sadiq’s 1,825-pounder, of Bountiful, followed by Seamons’s, then Ralph Laub’s 1,407-pounder, Vernal, close behind.

The national record is held by Steve Geddes’s 2,528-pound stunner grown in 2018 at Boscawen, New Hampshire.

And then there’s the friendship component of the Utah Giant Pumpkin Growers Association, Seamons added.

“It’s a fun group of guys,” he said. “I’ve got friends I go do stuff with that I never would have met had it not been for pumpkins. I get phone calls and texts daily throughout the year from some of these guys. Sometimes it’s pumpkin-related, sometimes it isn’t.”

Seamons said the positive environment and fun of watching a carver turn a giant pumpkin into a sculpture never wears off, nor does the camaraderie of those who grow and compete.